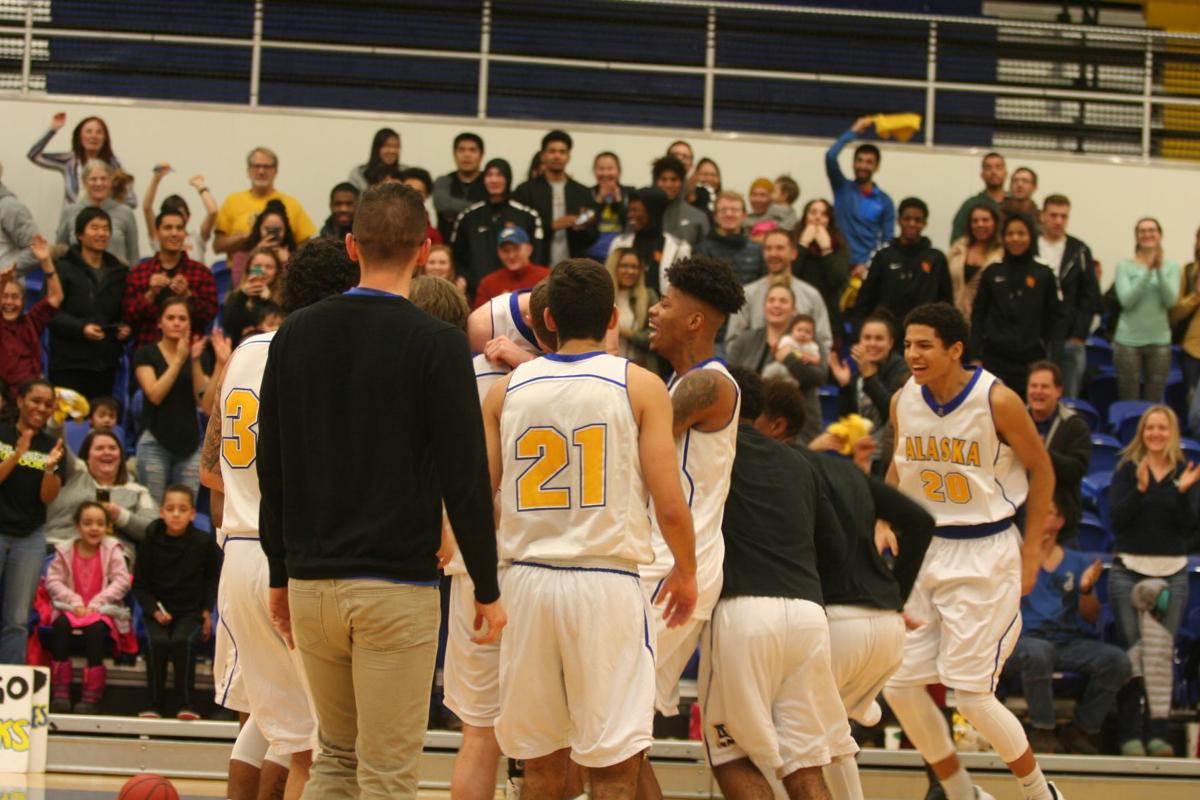 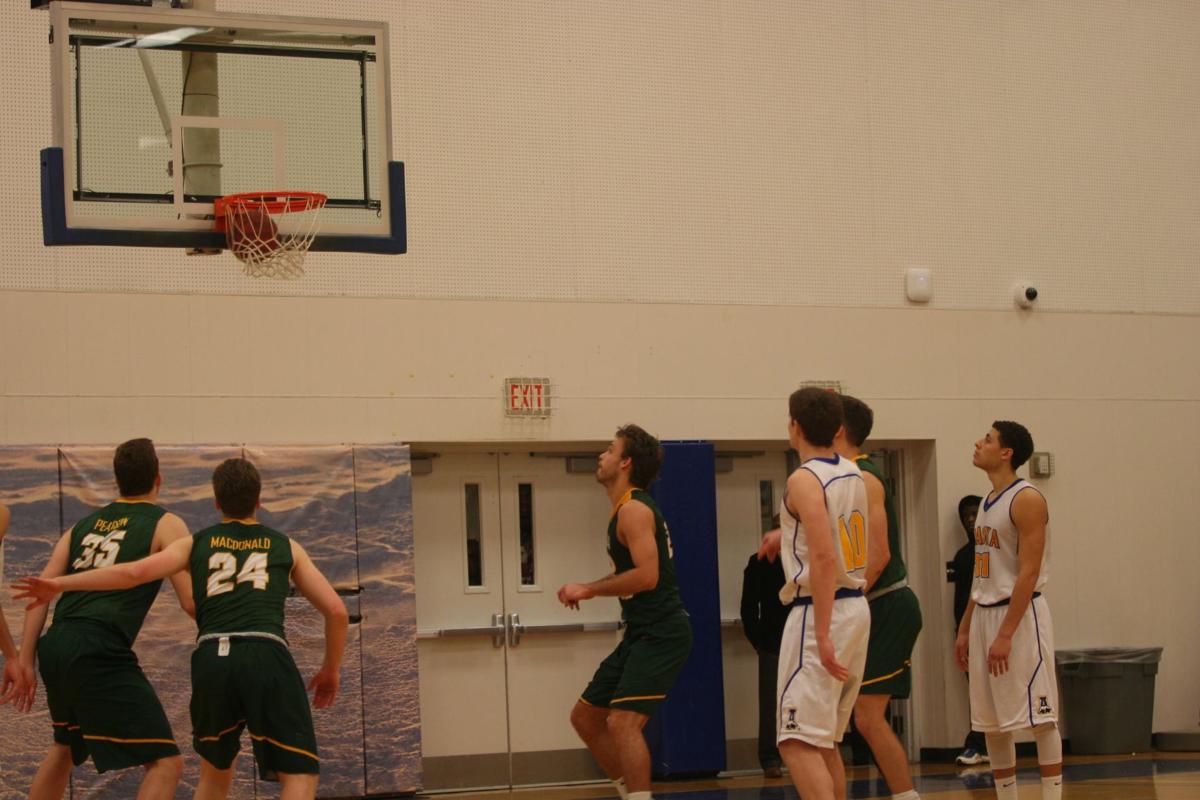 FAIRBANKS — If there was ever a game to prove fans should never leave early, Saturday’s Great Northwest Athletic Conference matchup between the University of Alaska Fairbanks and Alaska Anchorage men’s basketball teams was it.

Neither team led by more than six points throughout the contest, which saw the two in-state rivals trade blows at the UAF Patty Center until the final buzzer sounded.

In the end, Alaska needed every last second to earn a 68-67 victory over UAA. Junior guard Spencer Sweet sealed the deal, making three consecutive free throws after being fouled while shooting a 3-pointer with just three-tenths of a second remaining.

The Longview, Washington, native’s heroics at the charity stripe secured the Nanooks’ first win over the Seawolves since Feb. 27, 2014.

“I know there’s been a drought, Fairbanks vs. Anchorage,” first-year UAF head coach Greg Sparling said after the game. “I couldn’t be more proud of these guys. They all stepped up in their own individual ways.”

Although it was Sweet who clinched the win at the free throw line, every Alaska player contributed to help the Nanooks improve to 4-5 (1-1 GNAC).

The game looked out of reach in the waning seconds, as UAA (5-5, 0-2 GNAC) took a 65-60 advantage when sophomore guard Brennan Rymer made a layup to give the Seawolves their biggest lead of the second half with 20 seconds remaining.

Alaska junior guard Alex Martin hit a layup to cut the team’s deficit to three with 10 seconds left, and senior guard Alex Baham made it 65-64 with a pair of free throws moments later.

After UAA junior Jack McDonald sank two free throws to make it 67-64 with 7 seconds remaining, the Seawolves opted to foul UAF junior guard Aushanti Potts-Woods on the Nanooks’ next possession.

And that’s when the fun really started with 3.8 seconds to play.

Potts-Woods made his first free throw to cut the Nanooks’ deficit to 67-65. He then intentionally missed the second free throw, perfectly placing the ball on the rim with just enough touch that UAF junior Tymoryae Glover could soar across the lane and grab it out of the air.

“I thought Aushanti missing that free throw perfectly was incredible,” Sparling said. “And Ty getting in there to get it.”

Immediately after coming up with the rebound, Glover put up an off-balance shot. He came in contact with a UAA player, and the ball rolled out of bounds with 0.7 on the clock. The crowd groaned for a foul, and the referees glanced at each other to see who was going to make a call.

Instead, the three officials met at half court. They covered their mouths as they intervened for an extended period of time.

“What are they talking about?” UAA head coach Rusty Osborne shouted toward the UAF bench.

A little less than a minute later, the referees began walking toward the scorer’s table, motioning for Sparling and Osborne to come together for an explanation.

The call was in: there was an inadvertent whistle that was going to give the ball to the Nanooks on the baseline under the Seawolves’ basket. The scorer was instructed to put 1.7 seconds on the clock.

Osborne and the UAA bench were irate. UAF’s bench and the frenzied crowd of 476 let out a collective sigh of relief.

Potts-Woods took the ball out of bounds. He surveyed the scene under the basket for a second or two before finding Sweet open in the corner of the baseline.

Sweet launched a desperation 3-pointer and fell backwards to the floor. The ball bounced high off the rim and hit the ground, seemingly giving UAA a 67-65 win, which would’ve been the team’s ninth straight over UAF.

As the coaches began to walk toward each other between the teams’ benches, a referee across the court stood with his arm raised over Sweet laying on the floor. He called a foul on UAA junior Sjur Berg, setting the Alaska guard up with three free throws with just 0.3 remaining.

Osborne, who is in his 15th season with the Seawolves, let the referees hear his displeasure. He asked them how they could make that call, even mixing a few four-letter words into his animated plea.

The crowd eventually settled down as Sweet stepped to the line for his first of three free throws. After he received the ball from the referee under the basket, the longtime Seawolves coach let his voice be heard throughout the gymnasium.

“Just hand it to them!” Osborne shouted toward an official as the ball left Sweet’s fingertips.

Swish. It dropped through the net, cutting Anchorage’s lead to 67-66.

“Just hand it to them!” he doubled-down as Sweet’s second make tied it at 67.

Sweet then hit his third free throw, giving the Nanooks a one-point lead. After the Seawolves’ ensuing inbounds pass hit the floor at midcourt, the crowd erupted and launched the Patty Center into a level of party it hasn’t seen in recent memory.

So, what was on the junior’s mind as he stood at the line knowing he needed to sink three in a row to clinch a Nanooks victory?

“Not too much,” Sweet shrugged after the game. “I’ve been in that situation before and I shoot a lot of free throws anyways. I zone everything out and go back to being in the gym shooting free throws alone.”

The Nanooks jumped off the bench after the game and surrounded Sweet, who is in his first year at UAF after transferring from Lower Columbia in Longview, Washington. Junior forward Michael Kluting, a Palmer native, scooped the guard up and lifted him into the air in celebration.

“I wasn’t really expecting it,” said Sweet, who finished with seven points in all. “I expected (Kluting) to come and bump me or something, but he’s a big, strong dude who likes to pick stuff up.

“So he was just running around with me and everyone was screaming ... It was a great feeling.”

The two coaches reflected on the waning seconds after the game.

“They made free throws to win the game at the end,” Osborne said. “What transpired before that, transpired.”

Sparling, meanwhile, was excited his first meeting with the Seawolves ended with a win.

“Honestly, I was watching the ball and the rim,” the Nanooks coach said. “I didn’t see the foul. But I’ll take it. I know in this business, you take them anyway you can get them.”

Sweet will deservingly be remembered as the hero after making three straight buckets, though the victory was the sort of “team win” every coach dreams about.

Potts-Woods finished with a game-high 17 points, dazzling from every inch of the court as he drove to the basket for layups, made off-balance jumpers and connected from deep behind the arc.

Kluting scored 13 of his 14 points in the second half and finished with 11 rebounds after battling foul trouble during the first 20 minutes of play. When he wasn’t on the floor, and after he eventually fouled out with 3:40 to play, senior forward Joe Lendway (eight points) carried the load.

“Big Mike fouled out, and I thought Joe came in and gave us some good minutes,” Sparling said of Lendway, whose biggest play came when he dove on the floor to force a Seawolves turnover on an entry pass in the final minutes.

Sparling said the key Saturday was his players’ unselfish play and willingness to execute what was asked of them.

“I think we’re starting to buy into our individual roles,” he said. “I think the growth of this team is still out ahead of us. This team is going to get better and better. By February, I think we’re going to be a lot better.”

The Nanooks and Seawolves will meet again Feb. 26 in Anchorage. After losing four straight against UAA to start his career, Kluting said he’s glad to put the lengthy losing streak to bed.

“I’ve still got one year left, but that was two years in a row that we couldn’t beat them,” the Palmer native said. “It wasn’t much of a rivalry. It’s definitely big to come up with that first win. We’ve still got another game against them that’ll be big.”

Potts-Woods said he and his teammates had moments like Saturday’s victory in mind when they decided to come to Fairbanks.

“It feels good, especially knowing Anchorage has been putting a beating on UAF,” he said. “We’re here to change the culture, turn things around and build this fan base.”

UAF won’t return to action until Jan. 3, when it hosts GNAC rival Concordia University at the Patty Center.

The delay comes at a good time, because Sparling said it’ll probably take a few days for the magnitude of Saturday’s victory to hit home.

“I can’t be more proud of these guys,” he said for a second time. “I think it’ll probably sink in tomorrow, the next day or the day after when they see it on TV and read about it.”

After his team used every last tenth of a second to pull it off, nobody would blame the Nanooks’ new coach for letting that winning feeling hang around for a while.

It’ll stick with his players, too, while basketball fans throughout the Golden Heart City will likely think back to Saturday’s win the next time their buddy leans in and suggests leaving a game early to beat the traffic.

Nope. Can’t leave. Not until it’s really over.

A view of the outfield from Growden Field.