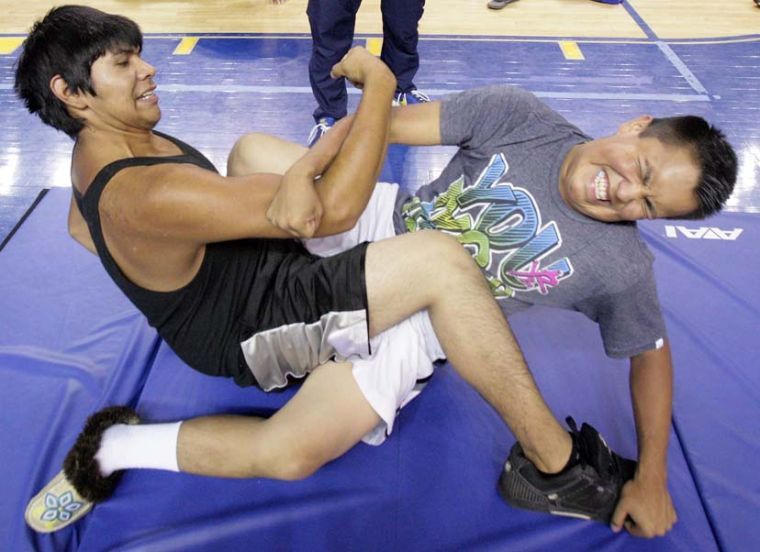 Ravell Northway, left, and Brandon VanHutten compete during the Arm Pull at the 2013 World Eskimo-Indian Olympics Saturday, July 20, 213 at the Carlson Center. 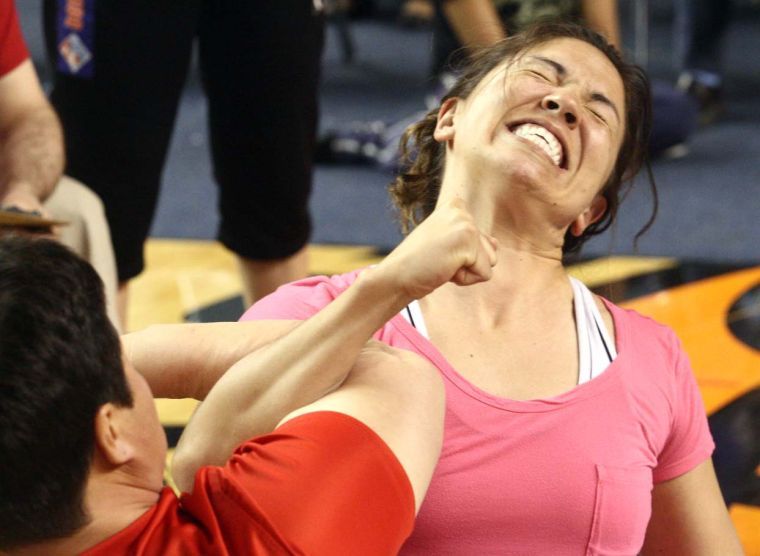 Elizabeth Rexford competes against Greenland's Susan Nielsen during the Arm Pull at the 2013 World Eskimo-Indian Olympics Saturday, July 20, 213 at the Carlson Center.

Ravell Northway, left, and Brandon VanHutten compete during the Arm Pull at the 2013 World Eskimo-Indian Olympics Saturday, July 20, 213 at the Carlson Center.

Elizabeth Rexford competes against Greenland's Susan Nielsen during the Arm Pull at the 2013 World Eskimo-Indian Olympics Saturday, July 20, 213 at the Carlson Center.

FAIRBANKS — The arm pull became the whole-body pull for its finalists Saturday afternoon at the World Eskimo-Indian Olympics in the Carlson Center.

The arm pull is based on a traditional skill of bringing quarry out of a hole in the ice.

The event involves two people sitting on a floor and facing each other with their legs crossing in opposite positions. The athletes then lock arms at the elbows with fists down and begin pulling each other in the double-elimination, best-of-three event.

Men’s winner Chris Jerue and women’s titlist Nicole Johnston generated power from more than their arms during the competition on the arena’s hardwood court floor.

“You try to use your legs and both arms actually. You push on the other guy’s foot while you’re pulling and leaning back,” Jerue said. “It’s same as the stick pull but one less arm.”

Johnson, who also is the chairwoman of the WEIO Board of Governors, earned her third straight women’s arm pull title Saturday.

“It’s just being strong all over,” Johnston, 44, said. “I can use my back and I think that makes a significant difference.”

Johnston’s experience — competing in 20 WEIO arm pulls — benefitted her Saturday against opponents who  relied mostly on upper-body strength and those who used their entire bodies.

“I’ve being doing it long enough ... just muscle memory and just knowing how to handle each competitor,” she said. “This year, I was actually looking at the competition and thinking this is going to be a pretty tough year.”

Johnston swept both rounds of her final against Noel Strick, who like Johnston, utilized as many muscles as possible throughout the event.

“It is your back for sure, your core (muscles),” said Strick, “and if you do it right, you can actually get leverage off of pushing against their foot.”

The two finalists hugged each other in respect before locking their arms and pulling.

“She’s strong and this is one of the events she knows she can still be good at, and we’re getting up there (in age),” said Strick, a 40-year-old middle school teacher from Wasilla.

The recent business school graduate won the first round against Jerue, 6-2 and 282 pounds.

“In the beginning, I took it in  the right time,” Fleischer said. “Where I lost, he took it first and leaned back a little so I couldn’t stop. So it was hard.”

Jerue quickly pulled all his opponents forward, not allowing them to get advantaged and also to take stress off his left arm that was weakened by a shoulder injury many years ago.

“You’re trying to get it done as quick as you can, it’s very stressful,” Jerue said. “The longer it takes, the more chance you have of pulling your arm muscle. You try to keep it locked, lean back and use a lot of back if you can.”

Vanessa Tahbone, of Fairbanks, placed third for the women and Greenland’s Mikkel Andersen was third for the men. Andersen won Friday night in the drop the bomb, going 109 feet, 2 1/2 inches in another event that tests strength.

Tim Field, after Saturday afternoon’s preliminaries for the one-foot high kick, said he wouldn’t be surprised if the world record that he shares with Point Hope’s Jesse Frankson was broken during Saturday night’s finals.

The event requires a competitor to jump off the floor with both feet, kick at a suspended object with one foot and land on the same foot.

“Records are meant to be broken,” Field said. “If they break it, then (I’ll say) good job.”

Field ended up congratulating himself, and getting congratulations from others, as he set the record Saturday night, reaching 117 inches (9 feet, 9 inches).

“It was nice finally putting it together,” Field said Saturday night by cellphone. “Two years ago, I tied the record and I just wanted to break it this time.”

Field shared the old mark of 116 inches (9 feet, 8 inches) with Frankson, who had first reached the height at the 2004 WEIO.

Field credited pointing his toes and his breaking the old mark Saturday night on his first attempt.

“It was kind of a stutter step, followed by a couple of big steps and then I go for the jump,” he said of his approach.

Field reached 104 inches (8-8) Saturday afternoon to qualify for the final.

The 22-year-old, who is originally from Noorvik, now lives in Anchorage where he’s an information technology intern for an aviation company.

It was a Unalakleet sweep for the titles in the bench reach on Saturday morning.

Nick Hanson took the men’s honor at 47 1/2 inches and Barb Towarak led the women’s field with an effort of 30 1/2 inches in the event that tests balance, strength, patience and precise touch.

Deenaalee Hogdon, a West Valley High School senior, was the women’s runner-up at 29 3/4 inches and Crystal Worl of Anchorage took third at 29 inches.

FCSA is recruiting for short and