Veronica McDonald, 23, of Canada's Northwest Territories reaches for distance in her third and final attempt while competing in the Kneel Jump finals during the World Eskimo-Indian Olympics Wednesday, July 18, 2018 at the Carlson Center. Events and festivities continue through Saturday. Eric Engman/News-Miner 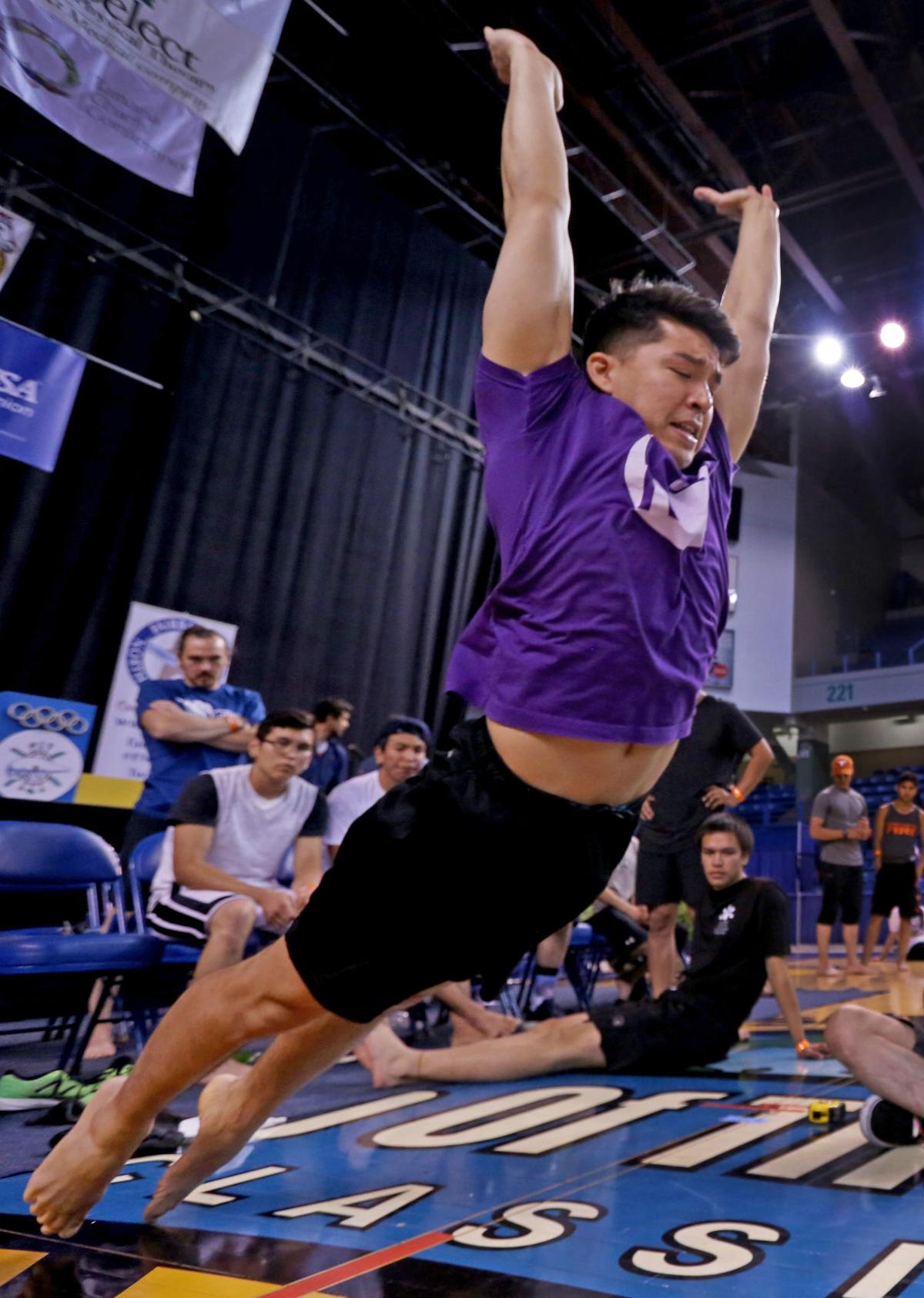 Kyle Worl, 27, of Juneau, leaps from his knees on his first attempt while competing in the Kneel Jump finals during the World Eskimo-Indian Olympics Wednesday, July 18, 2018 at the Carlson Center. Events and festivities continue through Saturday. Eric Engman/News-Miner

Veronica McDonald, 23, of Canada's Northwest Territories reaches for distance in her third and final attempt while competing in the Kneel Jump finals during the World Eskimo-Indian Olympics Wednesday, July 18, 2018 at the Carlson Center. Events and festivities continue through Saturday. Eric Engman/News-Miner

Kyle Worl, 27, of Juneau, leaps from his knees on his first attempt while competing in the Kneel Jump finals during the World Eskimo-Indian Olympics Wednesday, July 18, 2018 at the Carlson Center. Events and festivities continue through Saturday. Eric Engman/News-Miner

FAIRBANKS — The motions Kyle Worl went through Wednesday afternoon to prepare for the kneel jump were as fascinating as his execution in the event of the World Eskimo-Indian Olympics at the Carlson Center.

The motions helped the 27-year-old Juneau resident win for at least the third straight title in the men’s division of the event that’s based on the speed and agility a person needs when hunting on the ice or moving from an ice floe during spring break.

The kneel-jump athletes each had three attempts Wednesday. The event that starts with the participant sitting on the floor with his knees behind the starting line and the soles of his feet up. The athlete then thrusts his body up and forward to a standing position.

The objective of the kneel jump is to go for distance while maintaining balance.

Before Worl jumped Wednesday, he went through a series of motions that featured breathing exercises, stretching and making sure his knees were properly positioned. His arms, before he jumped in a warmup or competition, went back in a motion similar to a bird about to take flight.

“It’s all about using your arms to give yourself extra momentum for your jump,” he said.

Worl said his kneel-jump preparation includes about 10 warm-up jumps. Each warm-up jump consists of him just using his legs and not swinging his arms.

“Then I go on to do the actual thing (warm-up jump),” he said, “and I do it on a mat so I don’t tear my skin before I actually get down to the floor.”

Grip, said Worl, is the biggest thing for him once he’s on a floor for an actual attempt.

“Feeling that you have grip to push you off of,” he said. “Sometimes I kind of cup my hands and breathe into them, and kind of use that warm-air condensation on my feet to open up the pores so that they have better grip on the floor.”

Worl said he enjoys the kneel jump because it was among the first events he competed in his WEIO debut seven years ago and he especially trains for the event.

McDonald didn’t go through a series of motions on the way to winning the women’s kneel jump in her WEIO debut.

“If I can just be honest about it, I don’t know what I’m doing,” she said. “It’s always been a natural thing for me. I just think of swinging my arms and really tucking my legs underneath me, as if I was a frog; just really kind of set personal bests for me.”

The Arctic Winter Games veteran, however, had plans for each of her three attempts Wednesday.

“My first jump is always a safe jump, just something I can jump as far as I can go,” the 23-year-old said. “My second one, I always try to go a little bit further and my third one, I just try to give my all.

“Usually my third one is a scratch just because there’s so much momentum in it and so much power in it.”

“I constantly try to get better at it,” McDonald said of the kneel jump. “I just find it so fun, I find it so exhilarating. It’s not impossible to come from your knees to your feet and also get length out of it.

A pair of WEIO veterans and Fairbanks residents rounded out the women’s top three.

Other athletic events that took place on WEIO’s opening day were scissor broad jump, four-man carry, one hand reach, the 5-kilometer Race of the Torch, the fish-cutting contest, and the preliminaries of the women’s blanket toss.

The complete WEIO schedule and descriptions of the games are available at weio.org, and in a supplement published by the News-Miner. The supplement is available at the Carlson Center entrance.