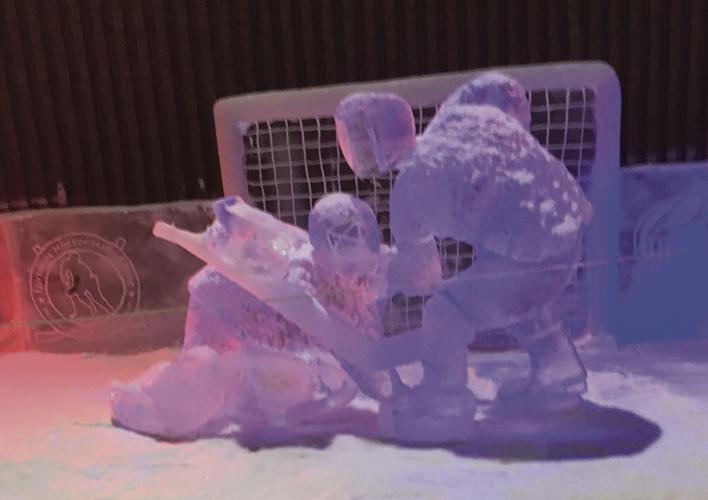 An ice sculpture of a goalie making a save resides near the main entrance of the Big Dipper Ice Arena in Fairbanks. The sculpture was carved by Jim Warner. 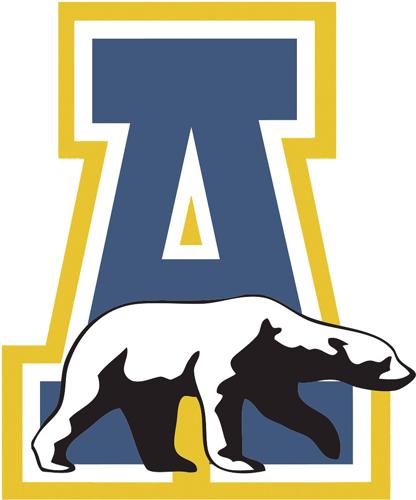 An ice sculpture of a goalie making a save resides near the main entrance of the Big Dipper Ice Arena in Fairbanks. The sculpture was carved by Jim Warner.

The top two NCAA Division I independent hockey teams will square off against each other in a two-game series that should provide some fireworks for a fitting grand finale to Hockey Week in Fairbanks.

The Alaska Nanooks will entertain the Arizona State Sun Devils at 7:07 tonight and Saturday at the Carlson Center as the center piece of the final weekend of Fairbanks’ annual celebration of hockey.

The Nanooks are 6-1 in their last seven games. The streak includes a win at Vermont in late January, two wins at Arizona State on Feb. 4 and 5, a sweep of St. Thomas at the Carlson Center Feb. 11-12 and a split of their series at Long Island University last weekend.

“I’m sure they are chomping at the bit to play us again,” Nanooks coach Erik Largen said earlier this week. “And our guys are excited about the challenge that is ahead of us this weekend.”

The two teams are very evenly matched according to the College Hockey Pairwise Rankings with the Nanooks 27th out of the 59 NCAA Division I teams and the Sun Devils 28th. The Pairwise rankings mimic the formula used to determine which 16 teams will advance to the NCAA Championship Tournament in March.

“There’s a lot of good hockey in store and it should be a fun weekend for the fans,” Largen said.

Largen said there are two key things the Nanooks will have to do this weekend in order to contain Arizona State’s high-powered offense.

“First of all, we have to stay out of the penalty box,” Largen said. “Secondly, we have to limit their odd-man rushes because they have so much firepower up front.”

In recent weeks, the Nanooks have been getting plenty of firepower from the line of Anton Rubtsov, Matt Koethe and Harrison Israels.

“They’ve been our best line for the past three weeks or so,” Largen said. “It’s really neat to see three first-year players having that kind of success. They should be very effective the next couple of years.”

While there should be plenty of fireworks inside the Carlson Center, the Fairbanks Hockey Hall of Fame will hold its Hockey Week in Fairbanks Fireworks Show on Saturday night from behind the Carlson Center just a few minutes after the Nanooks-Sun Devils game comes to an end.

An hour prior to each of the Nanooks games, the UAF Fun Zone, a collection of games and activities for children, will open in the Carlson Center’s Pioneer Room.

Today is Hockey Week’s “Wear Your Jersey to School and Work Day” throughout the Fairbanks North Star Borough. Fans are encouraged to wear their favorite jerseys to this weekend’s games at the Carlson Center as well.

Hockey Week in Fairbanks wraps up with three events on Sunday.

Power skating clinics are scheduled at the Polar Ice Arena in North Pole. Participants had to preregister for the event.

The week comes to a close with the Back Yard Rink Contest judging at the Lat 65 Brewery. Each rink entered in this year’s contest will have a laptop video presentation playing during the event from 4-6 p.m. and fans will be able to view the videos and vote for their favorite rink.

Lat 65 plans to unveil a new “Hockey Week Ale” during the event.

SERRC is Hiring! Are you an experienced

The Alaska Earthquake Center is hiring