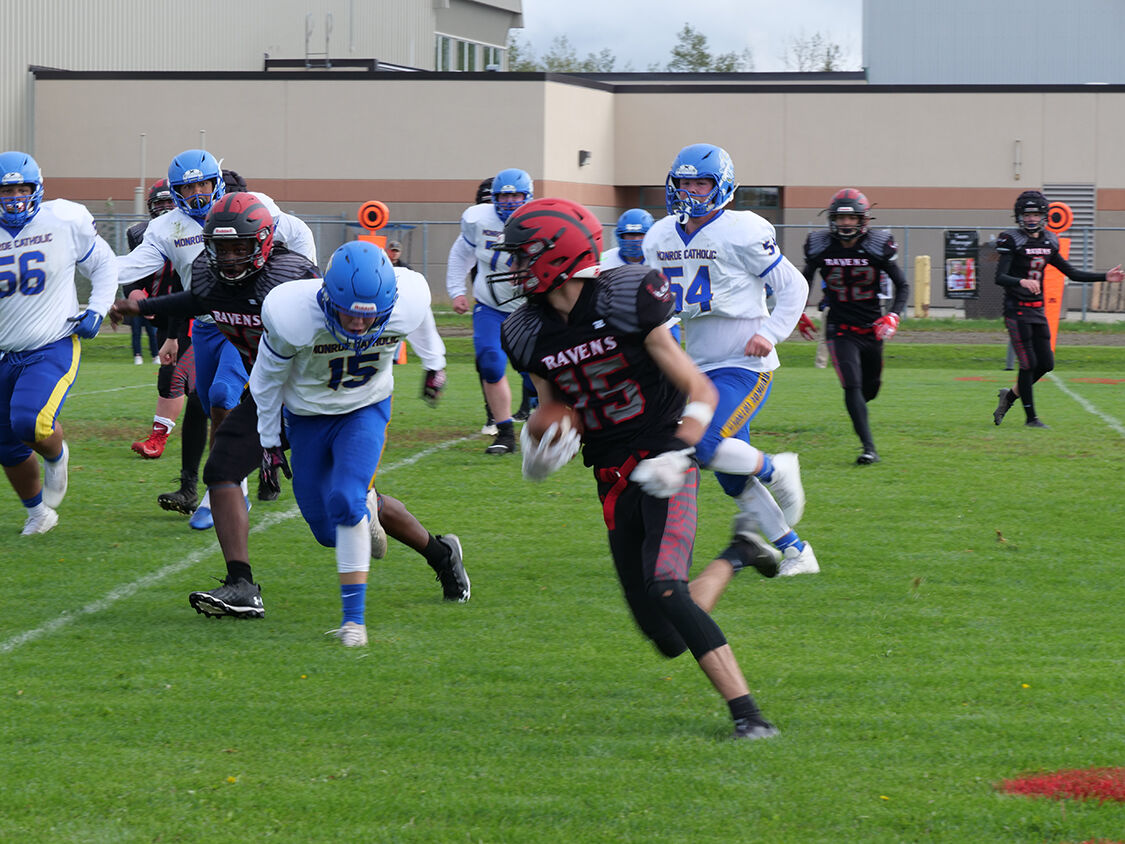 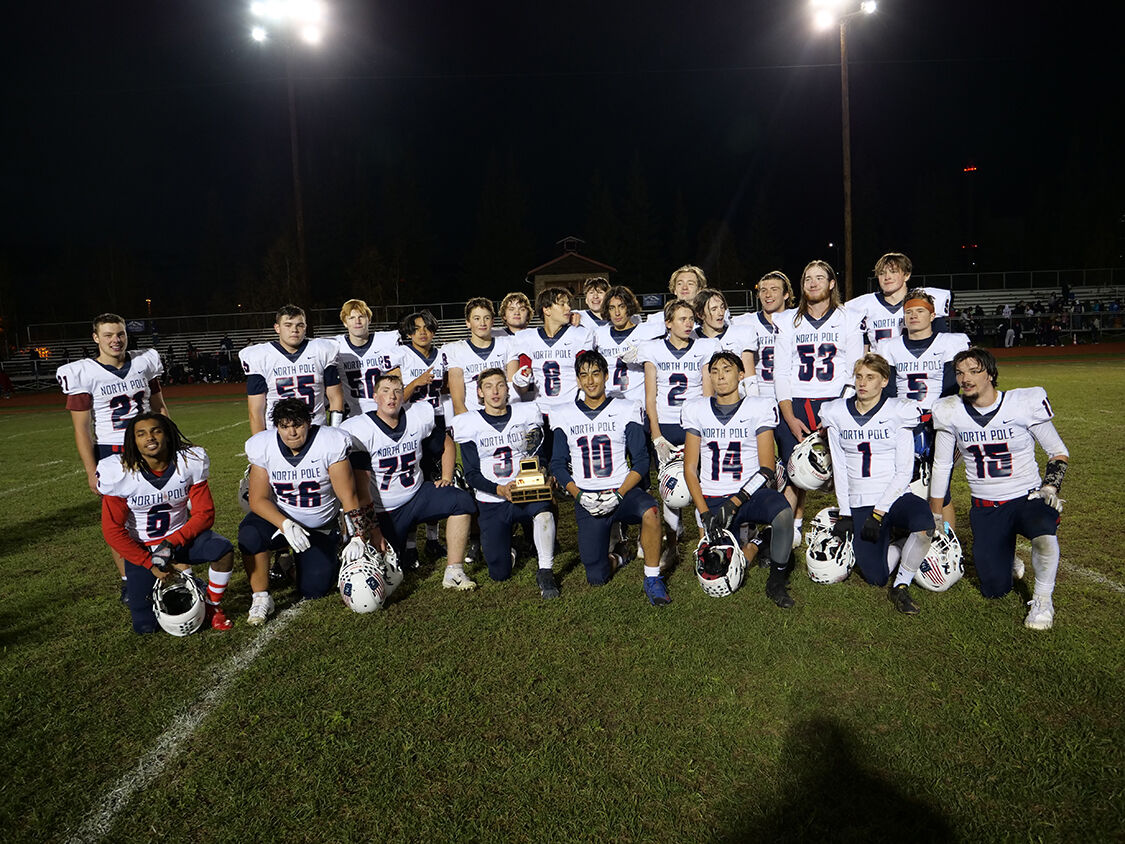 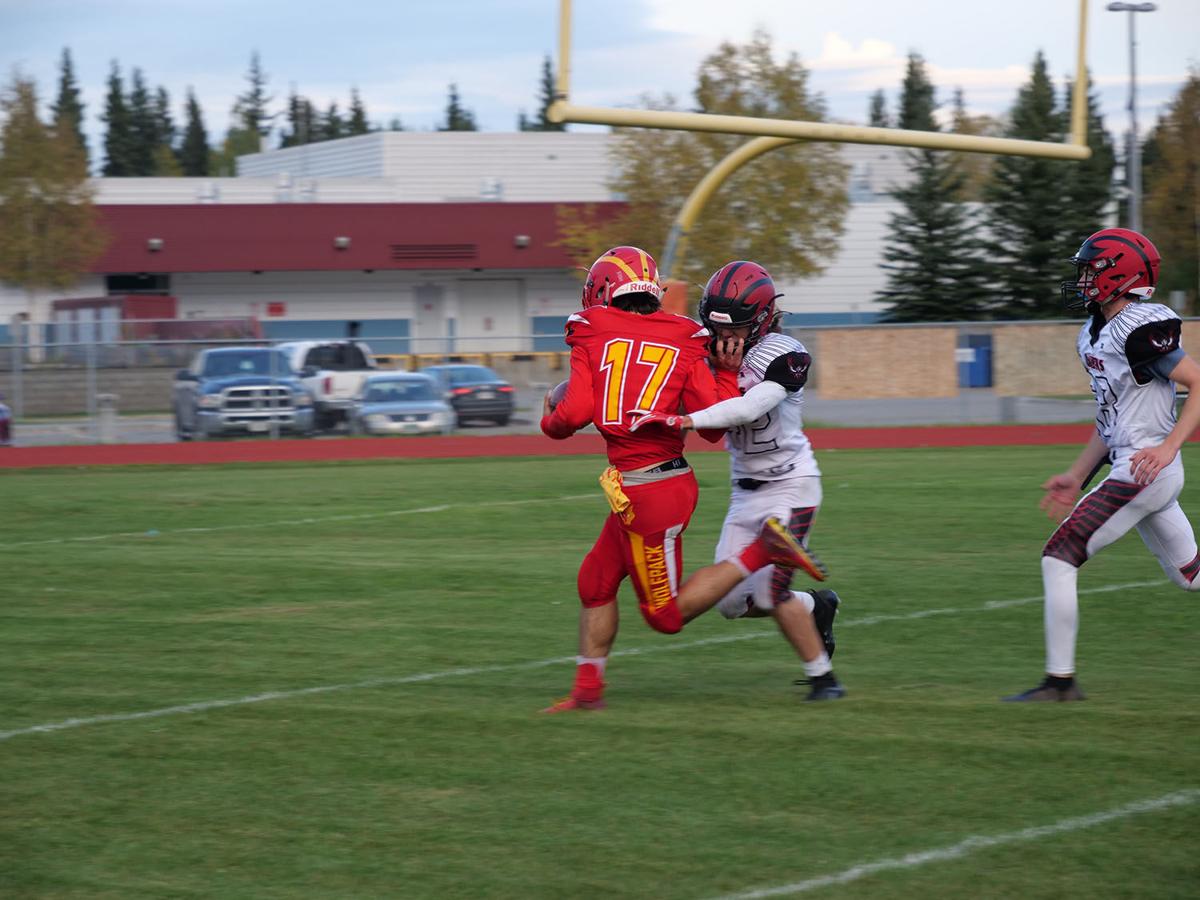 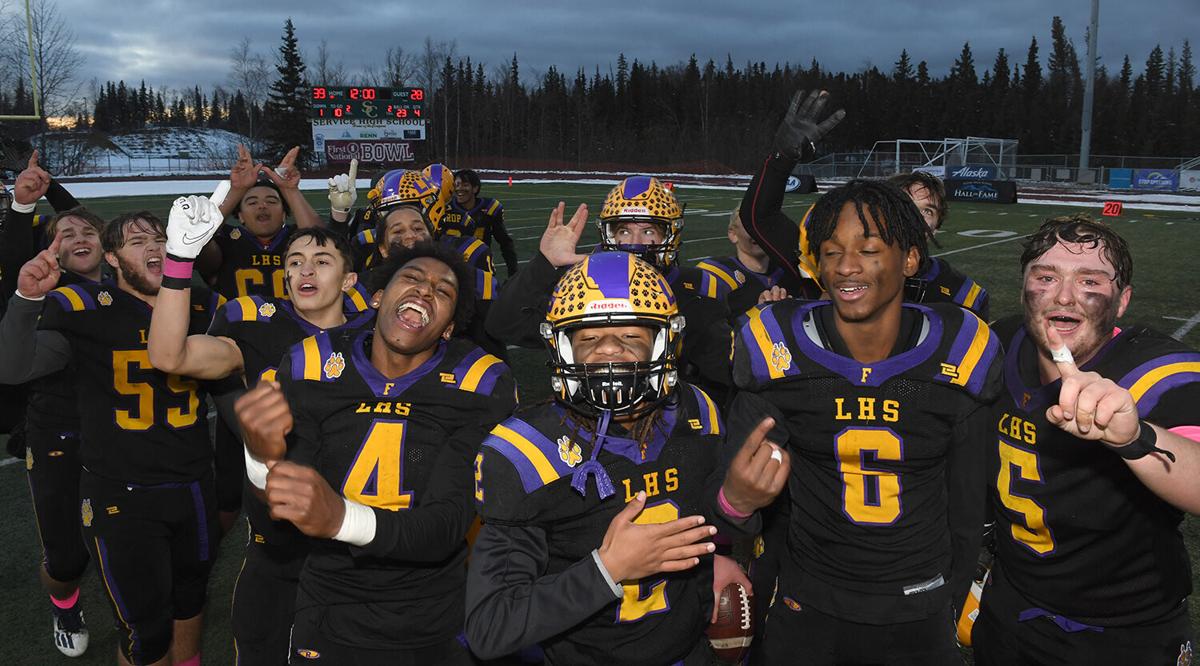 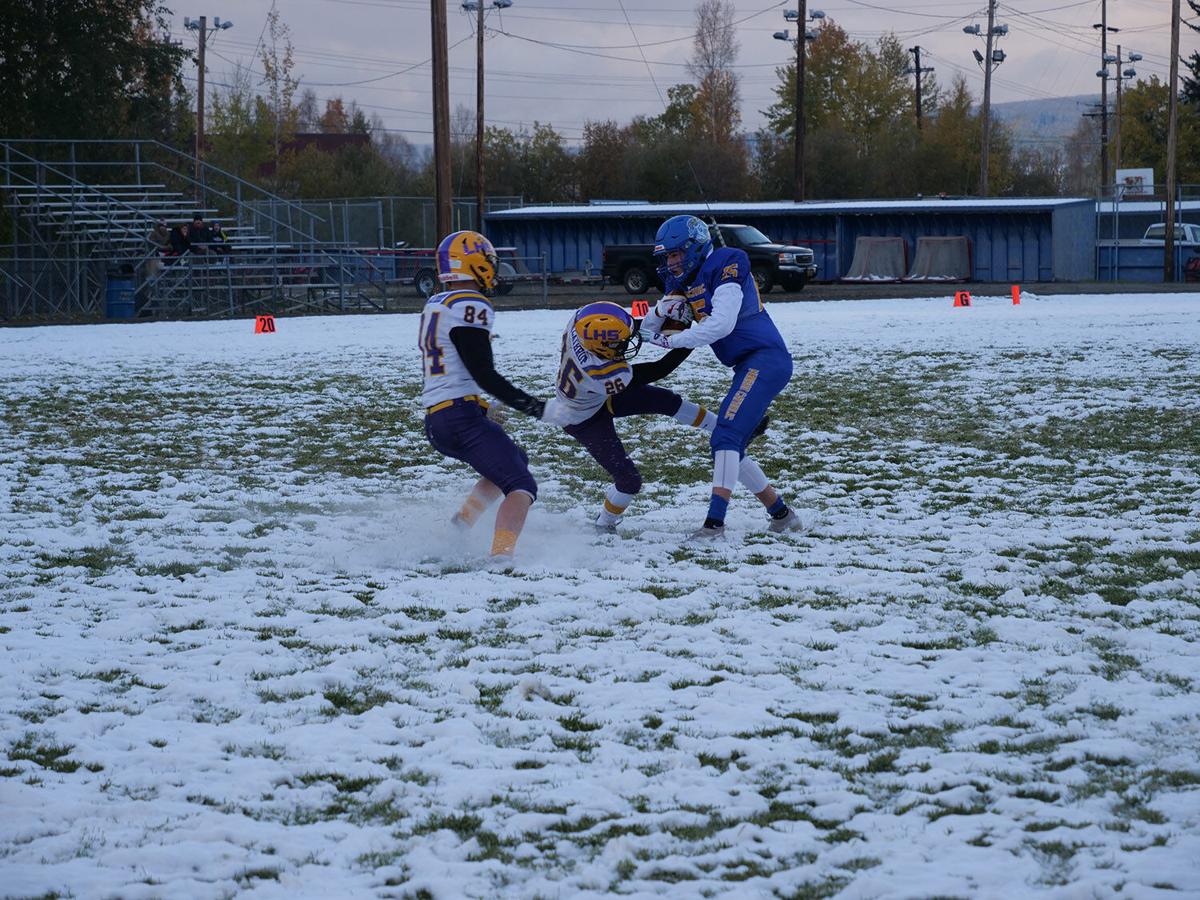 Members of the 2021 All-Fairbanks Football Team. Top photo courtesy of Robert Halinen. All other photos by Hart Pisani/News-Miner

Members of the 2021 All-Fairbanks Football Team. Top photo courtesy of Robert Halinen. All other photos by Hart Pisani/News-Miner

After taking forever to put together the previous incarnation of the All-Fairbanks team, we’ve decided to get a head start on this one.

While several sports are still in session, there are others that have wrapped up. Today, we’ll be putting together the All-Fairbanks Football Team. We’ll be doing this for all other sports as well as time allows. Let’s get to it.

While Monroe’s Robert McGee and North Pole’s Devon Clark had outstanding seasons, Littell was responsible for every point scored in the Malemutes’ first ever state championship in football. He scored six touchdowns (four rushing, two passing) in the title game and was named Conference OPY. Littell will surely be playing football on Saturday’s next fall.

Hyson was named second team All-Conference, but his numbers and sheer speed will tell you he’s a first team All-Fairbanks player. The Patriots used multiple running backs, but Hyson was the leading rusher with 400 yards and four touchdowns at running back.

Polesky was named second team All-Conference, but he was an All-Everything for the Ravens this past season. Running, receiving, returner, defense, Polesky was everywhere. Lathrop’s Tyler Clooten and North Pole’s Nic Clark deserve honorable mention for the position.

Barney was the conference OPY and would likely have been MVP if there’d been one. In Monroe’s first game of the season against Seward, Barney scored on a receiving touchdown, kick return, and pick six all in the first quarter. That should tell you the type of player he is.

Littell liked to spread the ball around, but Silva was probably his number one target. The senior came up huge in both postseason games and all year long for the state champs.

The Pats were a run first team, but when they threw the ball they liked to go to Dutra. Of Clark’s 45 completions this year, 12 went to Dutra for 182 yards and four touchdowns. Kaden Bostwick (North Pole), Eddie Coleman (Lathrop) and Kalvyn Bandith (Lathrop) all deserve honorable mention.

When McGee wasn’t going to Barney, you could bet he was going to Puryear. A talented blocker who also stands out in basketball and soccer, Puryear was a sure handed target for the Rams last season.

Being the starting center for a team with less than 20 players on the roster is hard. Doing it with a prosthetic leg is dang near impossible. Impossible is just a word to Collins as he earned first team All-Conference honors.

Nelson was one of the top all-around players for the state champs last year. He was up to the task of creating lanes and buying Littell time all season long.

No relation to Wyatt, but just as big, strong and talented. Both Nelson’s helped provide blocking for Clooten, Andre Williams, and Peyton George all the way to a state title.

The lone Patriot on the All-Conference first team offensive line, Edwin was arguably the top blocker for a Patriot team that ran all over their opponents this season.

Agee was a standout defensive player for the Rams as well, but providing time and running lanes for Robert McGee earns him a spot on the O-line team here. Aaron Conwell (Monroe) and Cody Webb (Lathrop) deserve honorable mention.

As the old saying goes, defense wins championships. The outstanding play of Lathrop’s defense all season long helped them win state and Nelson was one of the very best on that defense.

Nelson & Nelson may sound like a law firm, but the unrelated teammates were too busy hitting opponents to be hitting anyone with law suits. Any time there was a sack in the backfield in a Lathrop game, you were typically hearing the last name Nelson called.

Defense was the strength of this year’s North Pole team and Conley was one of the very best defenders the Patriots had to offer. Rushing yards were hard to come by for any North Pole opponent with Conley clogging the line.

It’s no wonder the Malemutes won state with three of the four linemen on the All-Fairbanks list. Webb was a regular fixture in opponents backfield taking down quarterbacks and running backs alike. Agee, Gabriel Hollett of North Pole, and Wayne Snowden of Lathrop all deserve honorable mention.

Conwell was voted defensive player of the year for the Denali Conference and it’s no wonder why. On homecoming against the Lathrop JV, the Rams struggled to slow down the Malemutes in the first half without Conwell. Conwell played in the second half, and the Malemutes couldn’t muster another point, showing the impact he had.

A talented receiver, Bostwick seemed to be all over the place on defense. Tackles (25 total), TFLs (six), sacks (1.5), fumble recoveries (one), blocked kicks (one), if it’s a defensive stat, Bostwick recorded at least one last season.

The Lathrop defense had a case for the best defense in the state this past season. Opp was the best player on that defense as he was DOY of the conference.

Clark made a name for himself at QB, but he was just as adept at stopping opposing QBs last season. He finished the year with three pass deflections, one interception, one forced fumble and 19 tackles.

Not much went the Wolfpack’s way this season, but Amio had nothing to do with that. A standout at running back and defense, he was one of the bright spots for this year’s West Valley football program.

Barney’s pick six in the first game of the season wasn’t the last one he’d record for the year. Barney was a first team selection at defensive back for the All-Conference list.

You didn’t really think we’d leave the fastest man in Alaska off the list, did you? George may be known for his speed in track, but he was also a turnover machine in football, changing the course of the game against Soldotna in week two with his fumble recovery.

This selection is almost by default. North Pole didn’t attempt a single extra point kick this season. Neither did Monroe or Eielson. Littell was nearly automatic on extra point attempts.

There were a number of players worthy of the choice here, but Laughlin was such an excellent standout on defense and special teams we had to include him here.

While Barney deserves special mention here as well, George constantly put the Malemutes in good field position and returned one for a score this year.

Lowry-Sims was another bright spot for the Wolfpack. While there were plenty of worthy choices, Lowry-Sims deserves praise for his accomplishments.

I know, I know. I shouldn’t pick two, but they both deserve credit for the work they did. Balash led the Malemutes to a one-loss season and the first state championship in school history and that can’t be overlooked. Hollett led North Pole to their first winning season since 2017 three years after going winless. Both deserve praise and it was impossible to choose between the two.

WERE HIRING! Executive Director • This