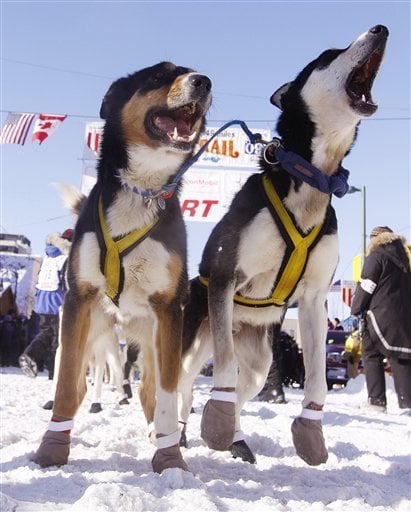 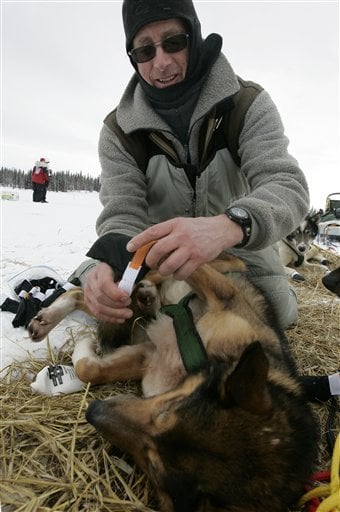 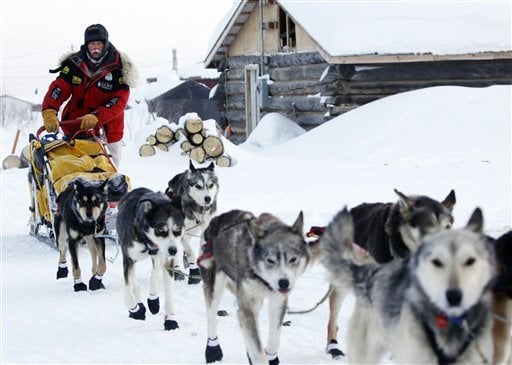 For the next few months, thousands of dogs will be running across Alaska and Canada in several long-distance sled-dog races. To compete, most will need to wear booties to protect their feet from rough, icy terrain.

This begs the question: Do household dogs need to wear booties when strolling or hiking with their humans?

Canine experts say no, but with some exceptions.

"On average, most dogs do not need them, but there are absolutely circumstances in which dogs would benefit - the extreme trekkers and rough terrain, and certain medical conditions - that would help the feet," says Monica Mansfield, a veterinarian in Medway, Mass.

While most dogs don't need to wear booties on their day-to-day walks, even in snowy conditions, a few more situations beg for booties:

- When healing from foot surgery, or if cuts or a torn toenail exist.

- When snow cakes in a dog's pads, leading to hobbling snowballs.

- When an older dog lacks firm footing or is afraid to get up and move around.

By comparison, sled dogs - such as those booting up for Alaska's Iditarod Trail Sled Dog Race, a more than 1,150-mile annual trek from Anchorage to Nome that begins March 5 - are carefully outfitted with booties at every step.

The numbers are impressive. Musher Jodi Bailey, 42, of Chatanika, Alaska, was recently counting and packaging booties for the Iditarod. She figures she'll need 1,200 to 1,300 booties to keep her team of 16 Alaskan huskies outfitted for the race, which can take 10 days to more than two weeks.

"The booties really are critical in terms of taking care of dogs' feet," says Bailey.

Each dog's booties are exchanged for new, dry ones at each of two-dozen checkpoints along the Iditarod route. That's changing up to 64 dog booties per checkpoint, and Bailey will have two to four sets of booties per dog awaiting her at each stop.

Bailey and her husband, Dan Kaduce, another dog musher, figure the y easily run through 5,000 dog booties each year - a costly expense.

"You're using the booties to prevent snowballs and rubs and splits," says Bailey. "It's definitely a protective (layer)."

Fortunately, Kaduce's mother, Meg Thornton, who lives in Chippewa Falls, Wis., has enlisted friends - loosely known as "the bootie brigade" - to help sew up to 4,000 dog booties for Bailey and Kaduce each year.

Mushers like Bailey and Kaduce play with their sled dogs' feet when they are young to acclimate the dogs to having their feet handled. That makes it easier to use booties later on.

Mansfield suggests distracting a dog while putting on booties, and getting them on qu ickly. Get the dog outside and walking quickly, too.

"Don't give them time to shake it off or high step," Mansfield says.

Before resorting to booties, the vet offered these suggestions for pet dogs:

- Rub a dog's pads with olive oil or spray them with Pam before a walk. It helps prevent irritants such as road sand and salt from sticking to paws.

- Wipe paws upon re-entering the house to remove oil, sand and salt.

- Carefully trim the hair that grows between a dog's pads; keep toenails trimmed.

The extra attention is good for dogs.

Both Bailey and Mansfield warned against putting booties on dogs during warm weather. Dogs regulate their body temperatures by panting and sweating through their feet.

Mansfield also warned owners to monitor a dog that's wearing booties. Sometimes, a dog will try to chew off a bootie, swallowing some of it in the process.

Finally, Mansfield suggested downsizing dog walks during inclement weather. "Maybe it's OK to scale back on the activity that would set one up for injury," she says.

The volunteer group Paw Partners, started by three Wisconsin women last year, sews dog booties that are donated to Iditarod mushers each year. Bailey received 500 booties from Paw Partners this year. Join the group for a pattern and instructions.

Similar booties, and the Cordura material for making them, are available at dogbooties.com. Find basic sewing instructions online, including at uberpest.com.