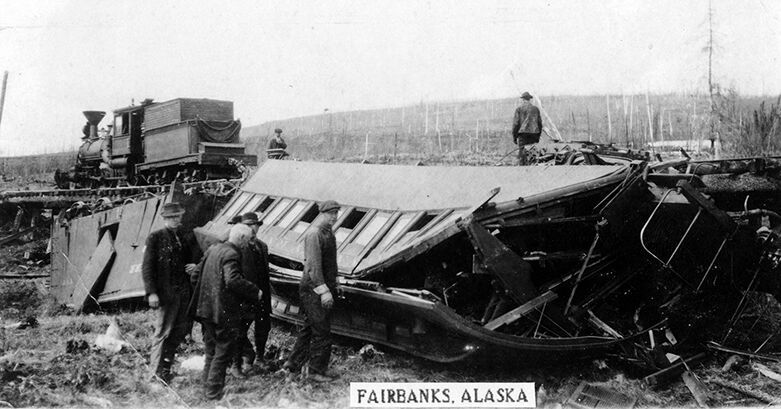 A little more than one hundred years ago there was a dramatic train wreck that occurred on the Tanana Valley Railroad. It is amazing no one was seriously injured, and it shows the resilience and determination it took in those days to be a resident of the Tanana Valley.

What is generally considered to have been one of the most phenomenal railroad wrecks in the history of any country occurred on the Tanana Valley railroad last Monday morning, when two cars jumped the track and fell off a trestle about 12 feet to the gulch below. One of the cars was a passenger coach, the other being a freight car. There were about 15 passengers on the passenger coach, including George A. Parks, John H. Patten, Fred Jorgenson, and Thomas Quirk and none of them were injured beyond receiving a few bruises except Jorgenson, and he was not injured to any appreciable extent, as he was able to walk about after the accident.

The cars and engine composed Monday morning’s outgoing train. The cause of any such accident as that which occurred is a mystery, because the track where the cars left the rails was in first class condition. The trestle, however, is on a sharp curve on the road, and although the train has crossed the place numberless times, conditions must have been just right for such a wreck. The front trucks of the passenger coach ran off first, careening the car over on its side and allowing it to hang over the edge of the trestle. An in its fall the passenger coach pulled the freight car with it, as the coupling held which is undoubtedly the reason why some of the passengers were not killed.

The trestle where the accident occurred is the second just this side of Olnes, or just a short distance from Merino station. Another accident occurred in the same vicinity in 1913, a passenger coach breaking away from the train and rolling down the side of the hill when the track gave way. That accident, however, was attributed to the thawing of the ground under the track.

The next day after the accident General Manager Wade H. Joslin announced that traffic to the end of the line would be discontinued until the track could be thoroughly examined. Therefore, since last Tuesday, trains have only been running to Gilmore. It is expected however, that through service will be started again early this week.

On another page of the same edition were the passenger accounts of the wreck:

APROPOS OF THE WRECK

Those who happened to be passengers on the ill-fated Tanana Valley train leaving Fairbanks last Monday morning have thanked their lucky stars since they are not now being prepared for the grave, or that they are not lying in the hospital groaning with pain. For the accident, as it occurred, was a very phenomenal affair, coupled with the fact that 15 people were in a coach which fell off a trestle 12 feet to the ground below, and nobody was injured, at least to any appreciable extent.

George A. Parks, mineral surveyor of the general land office, gives the most graphic description of the wreck as it occurred. The first thing he realized, he says, was that the coach was turning over, and jumping to his feet, he commenced to follow it around. That is, as the coach rolled, George walked with It, and in this manner succeeded in keeping his feet until the coach hit. During his little stroll up the side of the car and also across the ceiling of it Mr. Parks poked one of his feet through a window and cut one of his shoes, but otherwise was only bruised as a result of his experience.

Mr. Parks’ walk was the outcome of a preconceived idea as to what he should do in case of being in just such a wreck. Being a government engineer, he is compelled to travel extensively and has therefore been in wrecks before, all of his other experiences of a like nature however, having taken place in the western states, where cars rolling down mountain sides are frequent occurrences in the matter of train wrecks.

Just as soon as the passenger car hit the ground, Mr. Parks made an effort to get out. His only thought was for his camera, which is his constant companion, and he therefore secured some very good pictures of the wreck.

Tommy Quirk, one of the lucky discovers of the big pay on Dome creek, didn’t consider himself so lucky when he discovered that he was in a wreck. But when he found out that he was still intact and hanging together in good shape, he began to realize that he might yet have time to enjoy his newly found wealth.

Fred Jorgenson, the only passenger on the train who was injured, having had a shoulder wrenched, is one of the luckiest and still one of the most unlucky men alive. For if an accident happens anywhere in Jorgenson’s vicinity, he is sure to be in it, having suffered everything from scratches to a broken neck. On the other hand, he is considered one of the most enterprising mining men of the community, having spent most of his time extracting gold from pay gravel discovered by himself when not “doing time” in a hospital somewhere as a result of one of his numerous accidents.

Mr. Jorgenson’s first and greatest injury occurred about six years ago when he was working on Tenderfoot creek. At that time he had his neck broken in a cave-in, and his case is recorded in medical and surgical books as one of the most extraordinary ever known. For two or three years he suffered, although able to walk around with his head propped up in a brace, then he went Outside for treatment. The result was that he came back with one vertebrae taken out and his spine wired together in such shape that he was able to get about with ease.

Then he went out to Goldstream to operate. He sank his shaft and struck the pay and was just getting ready to open up when he broke his leg, which laid him up for the remainder of the summer. His next mining venture was at Hot Springs (Manley), where he started sinking a shaft on Woodchopper creek. The result is that during the coming summer the ground in the vicinity of Jorgenson’s hole on Woodchopper will produce something like $600,000 all due to the enterprise of Fred Jorgenson.

Jorgenson sold out on Woodchopper for $5,000 cash, the purchasers of his lease being Cleveland & Howell. And with the money he received, Mr. Jorgenson decided to go to the Tolovana and see what he could do. Accordingly he made the purchase of some ground and starting sinking a shaft on part of it, having today some of what is reported to be the richest ground on Livengood creek.

And, of course, being as Fred is in the money again, it was just about time that something in the way of one of his periodical accidents happened to him. But Fred is thanking his lucky stars that it is no worse, having been no more than badly wrenched and considerably jarred as the result of his experience.

Note: The locomotive involved in this accident was not the Tanana Valley Railroad Locomotive No. 1, which has been restored and is on display at the Friends of the Tanana Valley Railroad Museum in Pioneer Park. Fred Jorgenson, also affectionately known as “Broken Neck Jorgenson” was a charter member of Fairbanks Men’s Igloo No. 4. This train wreck of a History Nugget has been proudly brought to you by Fairbanks Men’s Igloo No. 4 and Women’s Igloo No. 8 of the Pioneers of Alaska, who would like to remind you that History Nuggets are posted every Monday to our website at pioneersofalaskafairbanks.org.

This auriferous History Nugget has been proudly brought to you by Men’s Igloo No. 4 and Women’s Igloo No. 8 of the Pioneers of Alaska, who wish to remind you that History Nuggets are posted every Monday to our website at pioneersofalaskafairbanks.org.

A bull moose walks through the taiga with Alaska Range in the background. Courtesy of Dan King, Two Rivers