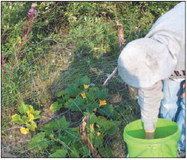 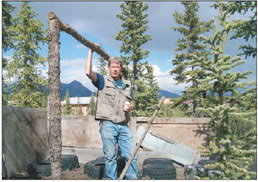 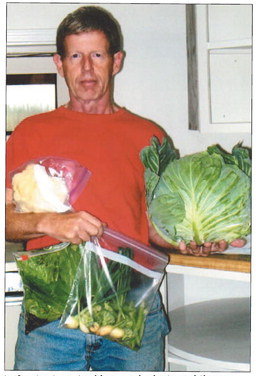 FAIRBANKS - Gardens can grow in the Arctic. Just ask Bill and Penny Gay.

The couple live and work in Ossian, Ind., — Bill as a construction worker and Penny as high school teacher — but in summer they are hard-working gardeners in Arctic Village. They teach residents the basics of gardening, provide seeds and tutorials, and try to pass on a sense of garden ownership. And they do it for free.

Bill, 55, first traveled to Arctic Village in 2003 as part of a learning tour group with the Church of the Brethren. He stayed with Arctic Village resident Charlie Swaney, accompanied village residents on a caribou hunt and helped start a recycling program. Everyone was welcoming in the village, he said. He decided to keep going back each summer.

In 2006, Charlie mentioned that he was experiencing health problems because of his subsistence meat diet.

Bill said he should try growing a garden. Charlie said it was too cold.

“How about you let me come up there and try,” Bill said he told Charlie.

He figured it out.

He ended up building a substantial garden on a friend’s property. Some of the keys to success include having raised beds, fencing to protect the garden from animals and being prepared for an unexpected snow in June. People saw his example and were inspired to start their own.

Bill and Penny, 44, have been returning every summer, living in a tent beside their garden.

They have yet to have an uncomfortable encounter with a bear or unfriendly creature.

They say they will keep going until they have a sense that the village residents will continue to garden on their own. Right now, Bill said there are 15 to 20 gardens in the village.

Bill said, continuing on with a long list of vegetables.

Arctic Village isn’t the only place where interest in gardening is picking up.

According to Heidi Rader with Tanana Chiefs Conference in Fairbanks, the total number of gardeners in TCC villages has jumped from 427 in 2008 to 521 in 2010.

“Education is really the key with gardening — especially in remote locations such as Arctic Village where gardening is a new concept,” she wrote in an email to the News-Miner. She has conducted workshops in 23 villages and has more requests for workshops than she can handle in one year.

Penny will arrive in Alaska in a couple of weeks. Since her arrival coincides with warmer weather, she’ll be bringing more seeds, small plants and fencing materials.

"A moose calf and cow stopped by our house and had a drink from our grandkids' wading pool. The look on the calf's face is priceless!" Thanks to Dan King, of Two Rivers, for sending along this shot.