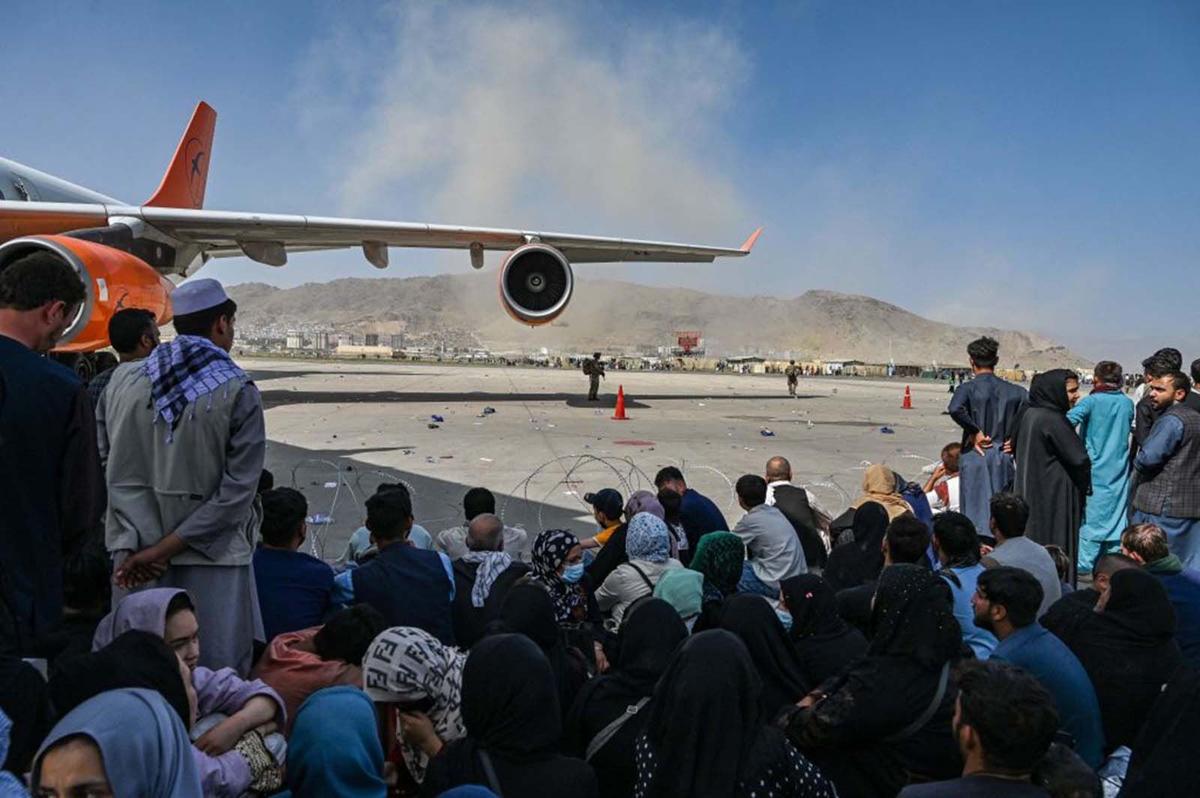 Afghan people sit as they wait to leave the Kabul airport in Kabul on Monday, after a stunningly swift end to Afghanistan’s 20-year war, as thousands of people mobbed the city’s airport trying to flee the group’s feared hardline brand of Islamist rule. Wakil Kohsar/AFP 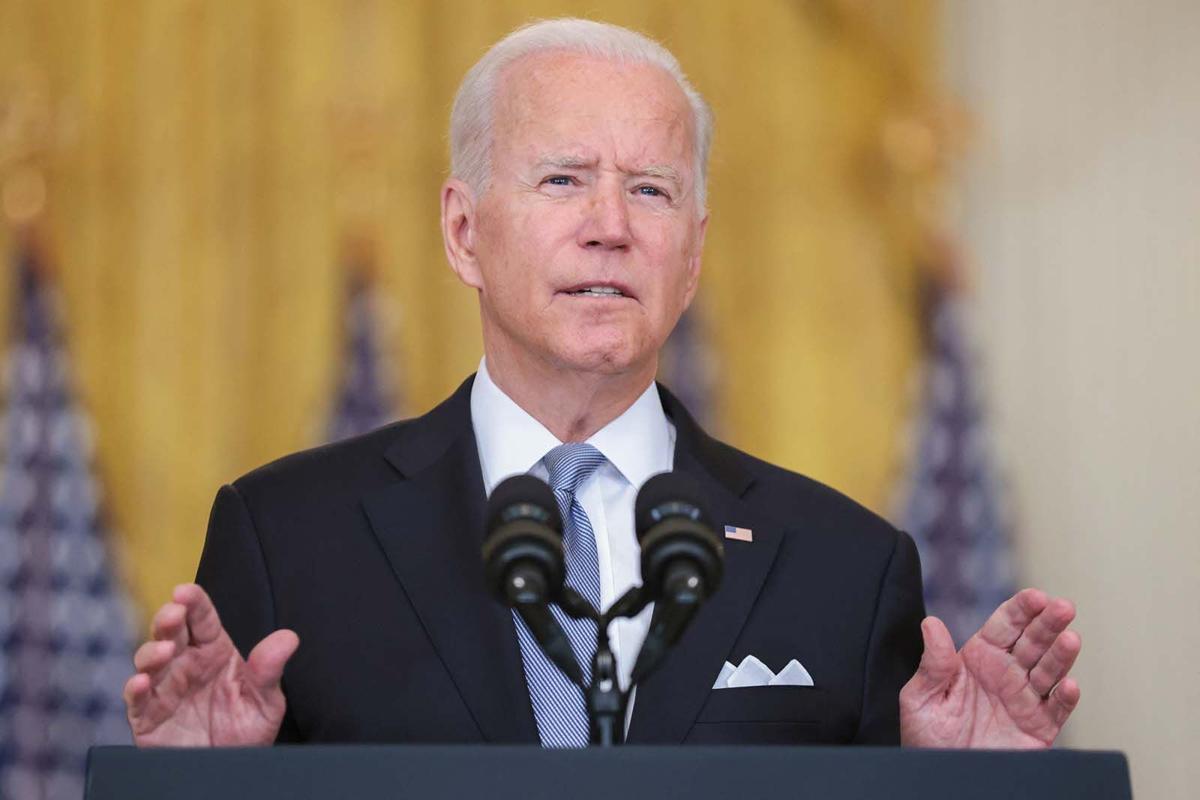 President Joe Biden delivers remarks on Afghanistan in the East Room of The White House in Washington, D.C., on Monday. Oliver Contreras/Pool

Afghan people sit as they wait to leave the Kabul airport in Kabul on Monday, after a stunningly swift end to Afghanistan’s 20-year war, as thousands of people mobbed the city’s airport trying to flee the group’s feared hardline brand of Islamist rule. Wakil Kohsar/AFP

President Joe Biden delivers remarks on Afghanistan in the East Room of The White House in Washington, D.C., on Monday. Oliver Contreras/Pool

“It has been a gut-wrenching few days for all Americans seeing our citizens being frantically ferried by helicopter in Kabul, echoing the tragic end of the Vietnam War,” U.S. Sen. Dan Sullivan said, describing the Biden administration’s pullout as a “botched execution of its own plan.”

Sullivan said the issue now is not whether to leave Afghanistan but how the United States goes about it.

“Right now, thousands of Americans and our Afghan partners stand in harm’s way on a tarmac in Kabul — or worse, in Taliban-controlled areas elsewhere in the country — as America’s standing in the world erodes.”

Sullivan added he is concerned that U.S. allies are losing confidence in America’s ability to lead and that adversaries will see the collapse of the Afghanistan government as an opportunity to further test U.S. strength and resolve.

“President Biden’s rushed withdrawal has failed,” Rep. Don Young said. “We have turned our backs on our Afghan allies, condemned millions of people to an oppressed future, and worst of all, dishonored American service members who made the ultimate sacrifice in this conflict.”

Like Sullivan, Young said the Biden strategy reminded him of the U.S. response at the end of the Vietnam War.

“This is truly a sad day for America and for those who served,” Young said. “In many ways, what happened in Kabul reminds me of what we saw in Saigon as the Vietnam War ended. We have spent over 20 years in Afghanistan and lost thousands of lives. Too many parents, including Alaskans, have had to bury a child, and for what outcome?”

Calling the deteriorating Afghanistan situation a “full-on emergency,” U.S. Sen. Lisa Murkowski blamed the Biden administration for failing to anticipate the crisis. She said the president did not follow recommendations from his own advisors.

“It is clear that conditions have quickly turned from a controlled withdrawal to a full-on emergency,” Murkowski said. “I am gravely concerned for the Americans that remain on the ground, embassy staff, Afghans that have helped the U.S. government, and the millions of innocent Afghans — particularly Afghan women and girls who are experiencing unimaginable violence at the hands of the Taliban.”

Biden spoke to Americans in a live address about his decision to pull out troops, as the Taliban seized the government from western-backed security forces. A widely shared video showed scenes of chaos that included people plunging to their deaths as they clung to a U.S. military plane departing from the Kabul airport.

“I stand squarely behind my decision,” Biden said, while acknowledging that he had not anticipated the swift takeover by the Taliban.

But the president blamed Afghan leaders who fled and went into hiding. “Americans cannot and should not be fighting in a war that Afghan forces” refused to fight, Biden said. “We could not provide them the will to fight for that future.”

The U.S. will pivot to diplomacy with a focus on human rights, the president said. “We will continue to lead with our diplomacy,” Biden said. “The way to do it is not endless military deployments.”

Sullivan: ‘It did not have to be this way’

Sullivan said late Monday: “It did not have to be this way. President Biden chose to embark on a time-based withdrawal from Afghanistan, initially and incredibly choosing Sept. 11, 2021, as the end date of America’s military presence in the country. What followed was the administration’s botched execution of its own plan.”

Sullivan previously warned on Aug. 13 that the “Biden administration’s precipitous withdrawal of U.S. forces from Afghanistan has left a grim situation.”

He urged Secretary of State Anthony Blinken to expand the State Department’s eligibility for special immigrant visas for U.S. supporters in Afghanistan. Sullivan joined 15 senators who penned a letter to Blinken warning that the lives of America’s Afghan partners were at risk as U.S. troops withdrew.

“We ask that the Biden administration recognize the compelling national interest in interpreting the law to apply to Afghans who also risked their lives by participating in or implementing U.S.-funded programs,” Sullivan said.

Biden said Monday that the mission now is for 6,000 U.S. troops to assist in evacuating Americans still in the country as well as Afghan allies, including translators and others who helped American efforts in the 20-year war. The American embassy has been shut down.

“Over the coming days,” Biden said, “thousands of Americans will be safely evacuated … I cannot and will not ask our troops to fight on endlessly in another country’s civil war,” Biden said, adding it is not in the best interests of national security.

“This is the right decision for our people,” Biden said, “and the right one for America.”

Sullivan, a colonel in the U.S. Marine Corps Reserve, said on Fox News Sunday that it is critical “these brave Marines and soldiers have the resources to be able to fully complete their mission which could involve combat at any moment.”

“Marine Corps and Army battalions already in the Central Command area of operations are the ones facilitating the evacuation of the embassy staff and the Afghanis who worked with U.S. forces,” Baker said.

“Additionally, an 82nd Airborne Division brigade from Fort Bragg will head to Kuwait as a back-up force to protect the airport,” she said.

Staff Sgt. Kaylee DuBois at Eielson Air Force Base referred a question on whether Alaska troops were involved to the Department of Defense press office in Washington, D.C.

A DoD spokesperson declined to comment on deployment in Afghanistan.