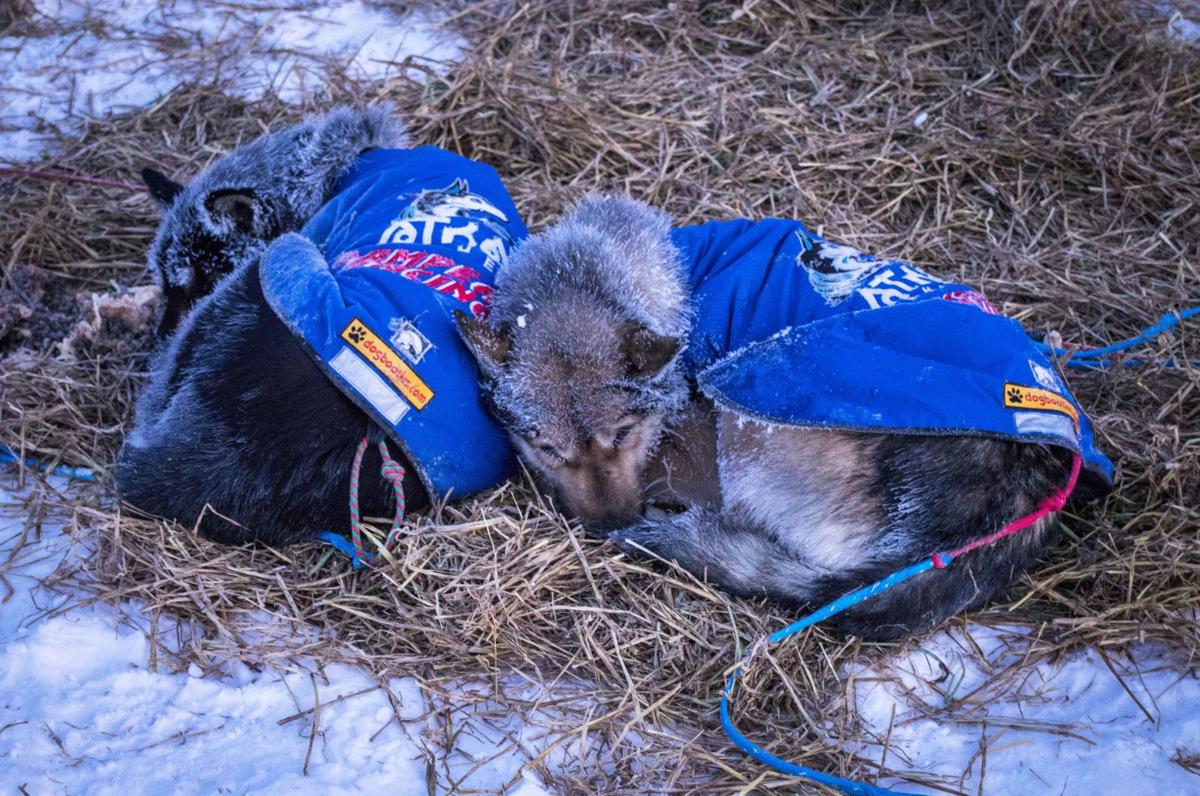 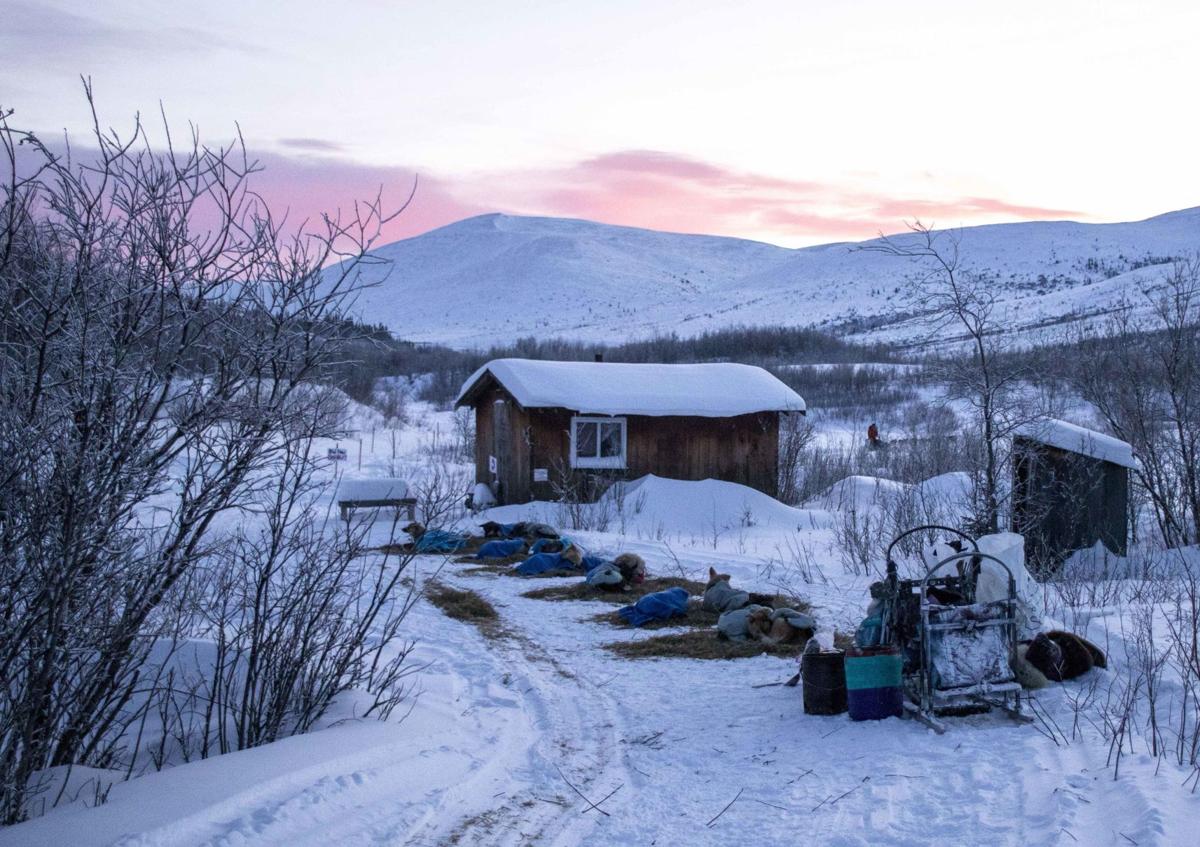 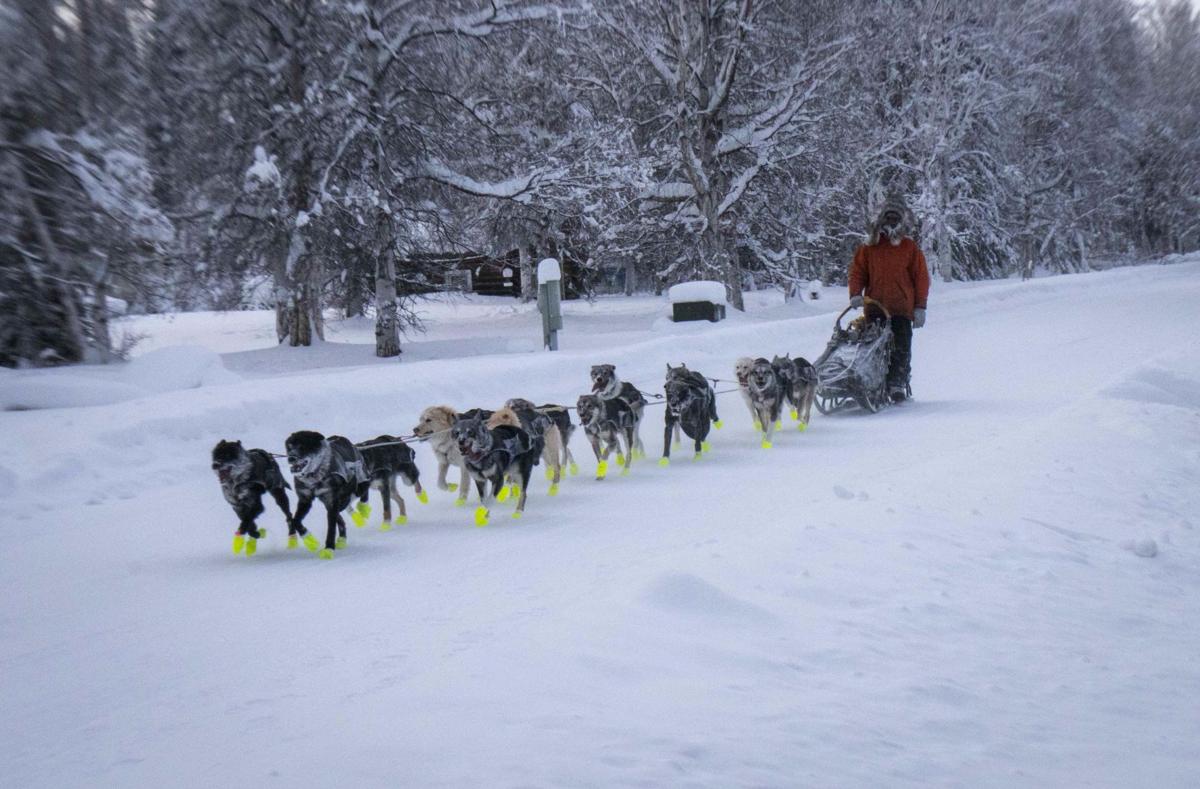 Brent Sass was the last musher to leave Fairbanks on Saturday, and prior to the start he said he had no intention of grabbing an early lead. But despite his lack of trying, the two-time champion was still the first to depart each of the initial three checkpoints on Sunday: Two Rivers, Mile 101 and Central.

“I don’t intend to be in the front right now. That’s not the goal at this point in the race, so I kind of had a slow run over to here,” Sass said as he was wrapping up his first mandatory four-hour layover at Mile 101.

Other than some frostbite, which was an issue for a few of his dogs, Sass said it had been a smooth trip through the first 114 miles. Michelle Phillips, of Tagish, Yukon, arrived at the second checkpoint nine minutes after Sass at 4:29 a.m.

“I was hoping that Michelle would (leave Mile 101) ahead of me,” Sass said half-joking, looking around at the dog yard that had filled up with nine other teams.

A few of his dogs stood up, sensing they were about to hit the trail again. Others stayed curled up in their beds of straw with their tails draped over frost covered noses.

Sass put one of his rookie dogs, Evo, in lead for the 28-mile run from Mile 101 to Central — a run that included a trip over Eagle Summit, with its precipitous drop on the far side. Before they left he walked to the front of the gang line and asked if she was ready. It was her first time leading in a race.

Sass headed out of the dog yard with all 14 dogs at 9:22 a.m. just as the sky was starting to turn a faint shade of pink.

“She did awesome … she killed it,” Sass said when he reached Central just under three and a half hours later at 12:47 p.m. He hustled to grab his new set of drop bags and then headed out on the 74-mile run to Circle, the next checkpoint, with Evo still in the lead.

Phillips was second into the Central checkpoint at 1:06 p.m. followed by Allen Moore at 2:37 p.m. Both teams of 14 dogs looked to be in good spirits. Their tails were wagging and they pulled at their harnesses, ready to chase down Sass. The mushers grabbed their drop bags and immediately headed out.

Cody Strathe and Jason Campeau were the next two to reach the third checkpoint and both decided to stay and rest.

Campeau enjoyed a plate of hash browns, eggs and sausage as he recounted what was a “dangerous” descent down Eagle Summit, the same spot where he had an accident in 2018 that resulted in a serious concussion.

“I was just more worried for the dogs because they were free falling … Some of them got wrapped up in the sled, so it was a little frustrating because you work so hard to train them and keep them healthy.”

Campeau struggled to get his brake in the hard-packed ice, causing his dogs to wipe out.

“To be honest, with my past concussions, I definitely wouldn’t have done that run if I knew it was going to be like that.”

He initially thought all of his 13 dogs managed to stay healthy on the treacherous descent — he dropped one at Mile 101 — but he ultimately left Central three hours later with only 12.

As of 9:20 p.m., the only other mushers to depart the Central checkpoint were Strathe, Ryne Olson and Nora Sjalin. Torsten Kohnert and Richie Beattie checked in at Central but had not departed.

Chase Tingle was one of the six mushers who had yet to reach Central. Tingle was issued a time penalty of one hour for replacing broken parts on his sled at Mile 101. The time penalty will be served in Dawson City.

As of 4:21 p.m. all 15 mushers had conquered Rosebud, the infamous summit between the Two Rivers and Mile 101 checkpoints known for its steep slope that sometimes leaves teams stalled out and, on occasion, unable to continue.

For two-time Quest finisher Beattie, this year’s slog up the mountain was his hardest yet. He took at least 10 seconds to gather his thoughts before he was ready to relive the experience.

“I’ve never stopped going up Rosebud. I always just keep it moving. Today I had to stop like six times to take a break for both me and the dogs,” he said while finishing a cigarette and warming up by the fire that was heating the drums of water at the Mile 101 checkpoint.

“It was fricking cold man. And you’re hustling up that hill. Like inside you’re just drenched in sweat even though it’s 40 below. And then you go downhill for a long ways so by the time you get to the bottom you’re just frozen.”

Beattie originally planned on taking just his mandatory four-hour layover before heading out, but after the slog up the summit, he decided to extend the stay to just over six and a half hours.

Olson of Two Rivers also had to break up her trip up the mountain.

“The dogs just climbed right on up. I actually had to stop them a couple times to catch my breath because I’m not in very good shape apparently,” she said at Mile 101.

She made the climb in the early hours of the morning on Sunday. A faint aurora could just be made out from the trail.

Olson’s dogs were curled up and enjoying their warm beds of straw after the climb. Some had blue fleece blankets draped on top of their normal gray dog jackets.

She was particularly impressed by one of her rookie dogs, Thresher, who was motivating the rest of the team.

“He was verbally cheering everyone on … Like literally barking and screaming,” Olson said, after throwing frozen treats out to the group.

“You’re only going like half a mile an hour, if that, as you climb up. And he was whining and barking and anytime we slowed down a little bit he would make a lot of noise and get everyone pumped up.”

Olivia Shank-Neff was the final musher to tackle the summit and reach Mile 101. As of 9:20, she was the only musher who had yet to depart Mile 101.

Nothing super about Super Bowl for Yukon Quest teams

The Super Bowl was playing on all three of the televisions in the Central Corner roadhouse, but only a handful of the 40-plus people who had p…