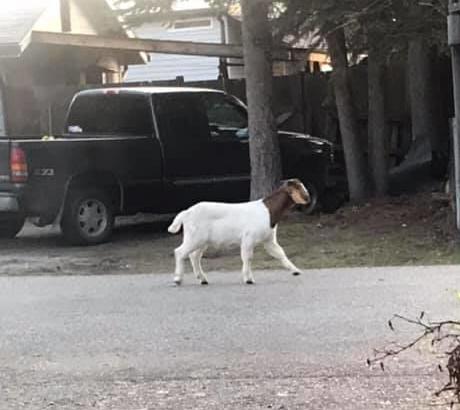 The goat was spotted in the Wilcox area Tuesday morning.  Photo courtesy of Ashley DeMota 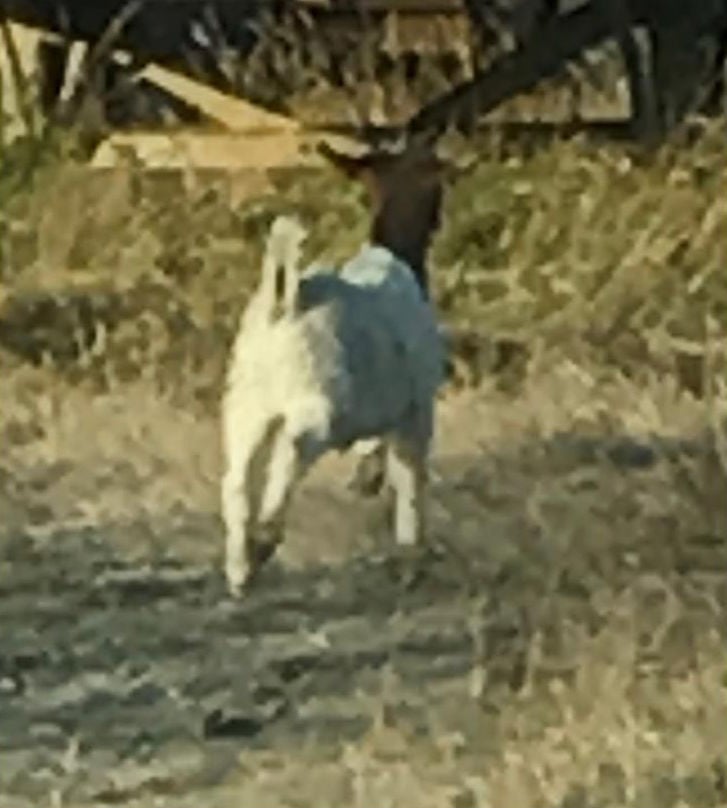 This goat has been leading Fairbanks animal control officers on a merry chase this week. As of noon Tuesday, it was still on the loose. This photo appeared on a poster circulated by Fairbanks North Star Borough Animal Control on Facebook Monday.

The goat was spotted in the Wilcox area Tuesday morning.  Photo courtesy of Ashley DeMota

This goat has been leading Fairbanks animal control officers on a merry chase this week. As of noon Tuesday, it was still on the loose. This photo appeared on a poster circulated by Fairbanks North Star Borough Animal Control on Facebook Monday.

Attached to the post was an image that elaborated: Beneath a photograph of a goat, the post read, “If you are the owner of this very fast goat, PLEASE call dispatch 459-1493. The goat is evading law enforcement and we could use your help!!”

At 9:20 a.m. Tuesday, a Fairbanks resident posted photographs to the Fairbanks Lost Pets group along with the message “Someone missing a goat in the Wilcox area? Last seen on Long Spur Loop”

The goat was still on the loose as of noon Tuesday.

According to Animal Control operations manager Sandy Hill, the goat is a male range goat — not a pet — and is used to being in a herd. This, she said, is making him tougher to catch. She referred to the goat as “savvy” a number of times.

“He’s quite the spokesgoat for freedom on Facebook,” she said. “I’m reading the comments and I’m like ‘Oh goodness.”

Hill said she doesn't know what the goat’s name is, and she couldn’t disclose any details about the owner. She said the public is providing plenty of reports on the goat’s whereabouts.

“This morning we got the report that he was in the Wilcox area. And there’s photos of him right there,” Hill said. “Folks are pretty good about letting us know where he is. So we’re going to try a few of the other tricks up our sleeve.”

Hill said Animal Control's aim is to “gently herd” the goat into an area with natural barriers, like high fences.

“The main thing is we want to keep the public safe and ensure no one gets hurt,” Hill said. “We want to make sure we can get him back to his owner and keep him safe as well.”

“There’s people rooting for the goat and people who have ideas for capture,” she continued, referring to all the Facebook activity that the goat has inspired. “Another goat may help. We shall see. Goats tend to like to be in a herd, so we may be able to try that. We’re going to keep trying until we capture him.”

Hill said the public can certainly help, with either reports of sightings or even — if they’re able to — by shutting the goat into a confined space until Animal Control arrives. She noted that it's important for the public not to chase the goat, because that could make him more skittish and harder to catch.

“He’s very savvy. That’s why the public can also help us,” Hill said. “We definitely encourage folks who have ideas to let us know. Our main concern is public safety and making sure that he (the goat) stays off the roadways."

As of Tuesday evening, two people on Facebook claim to have caught the goat, posting photos of the goat in a cage and a video of the goat being taken away in the back of an Alaska State Trooper patrol car.