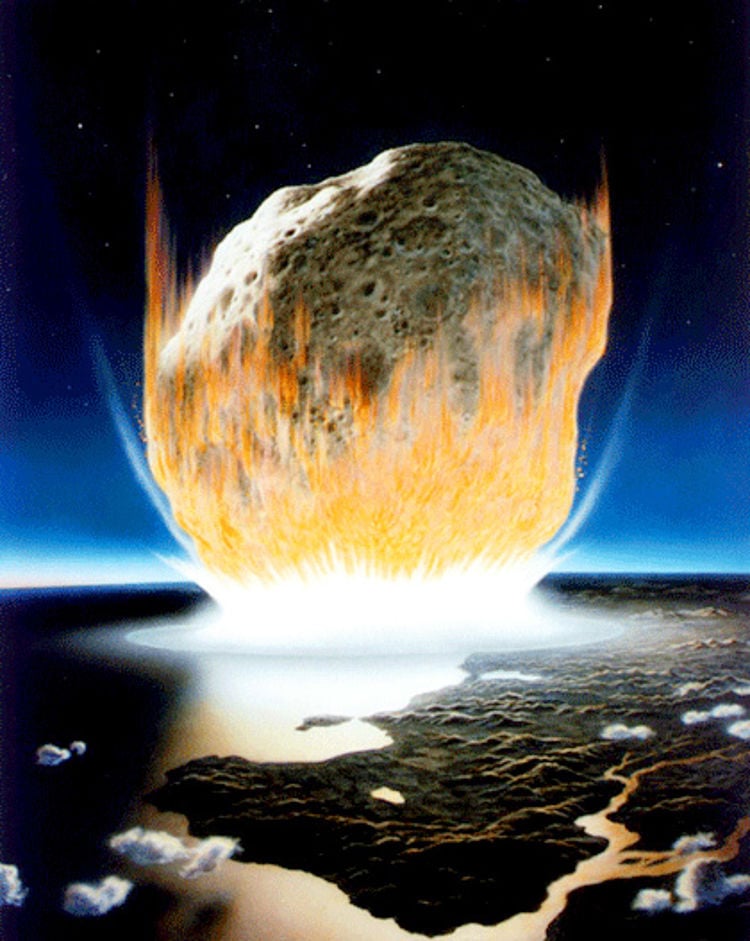 An artist’s interpretation of the asteroid impact. The asteroid in the artwork appears much larger than the 6-mile rock that scientists hypothesize actually struck the Earth 66 million years ago. Nevertheless, the image illuminates the heat generated as the asteroid rapidly compresses upon impact and the vacuum in its wake. NASA/Don Davis photo 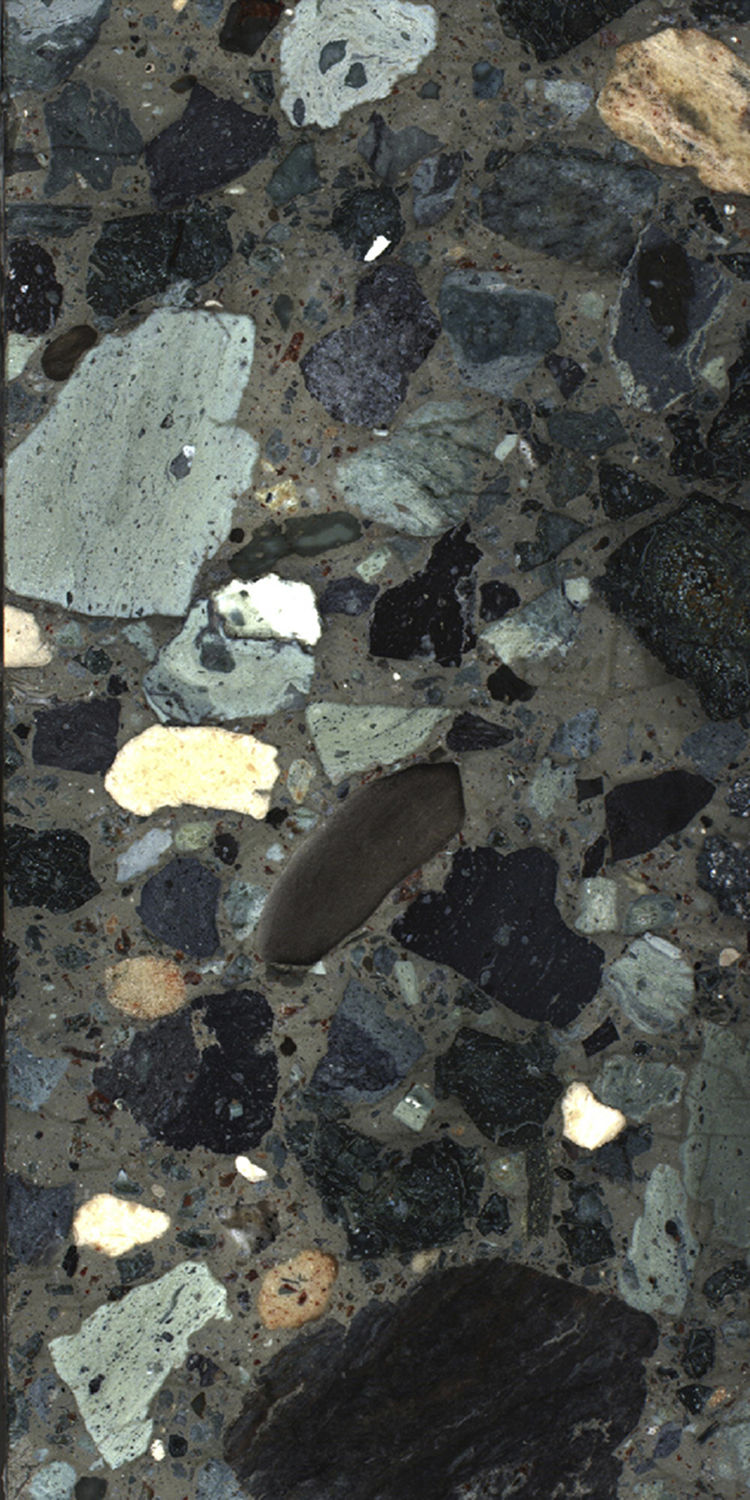 A portion of the drilled cores from the rocks that filled the crater left by the asteroid impact that wiped out the dinosaurs. Scientists found melted and broken rocks such as sandstone, limestone and granite — but no sulfur-bearing minerals, despite the area’s high concentration of sulfur containing rocks. This finding suggests that the impact vaporized these rocks forming sulfate aerosolsin the atmosphere, causing cooling on the global scale. International Ocean Discovery Program photo 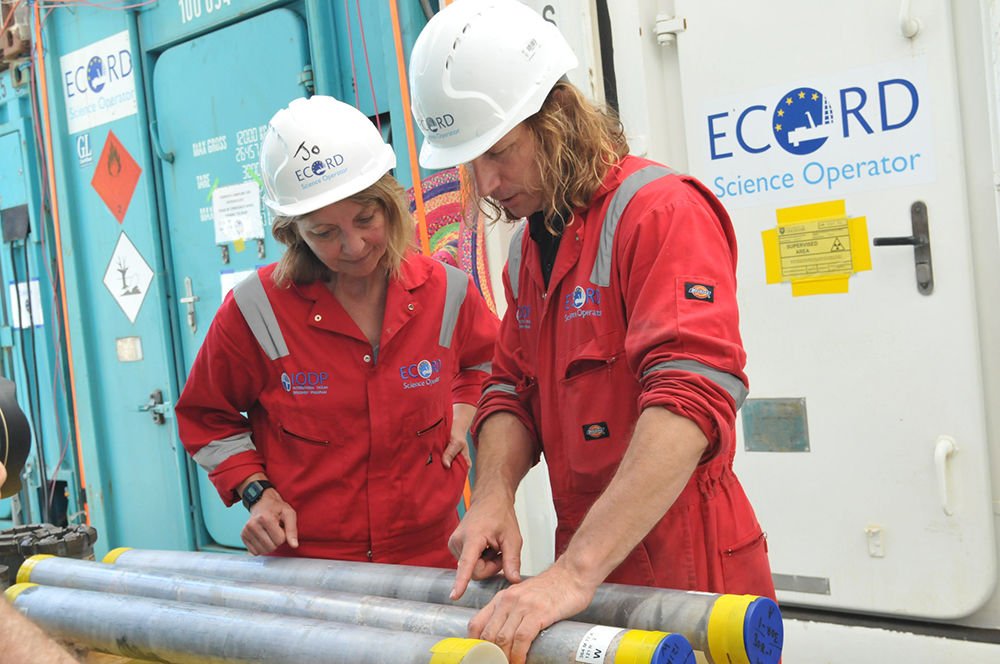 A University of Alaska Fairbanks scientist has helped uncover evidence of the mass extinction event long theorized to have wiped out the dinosaurs.

In 2016, a core sample holding layers of earth from a crater in the Yucatan Peninsula, near the Gulf of Mexico, was collected and shipped all the way to a lab in Germany, where UAF professor Michael Whalen would spend a month analyzing it, centimeter by centimeter.

“Simply, it’s the most exciting project I’ve ever been involved with in my career,” said Whalen, a professor of geosciences.

The research, which involved over 300 people, began in 2001, with drilling on land in Mexico, Whalen said. One of his colleagues approached him and asked whether he wanted to be part of the project to work on the limestones when Whalen responded that he “would be thrilled.”

Because the core sample had been immediately shipped to Germany, no one else had examined it in depth before Whalen and the visual core description team, which he led.

“When we went to Germany, this was the first time anyone had actually looked at the cores,” he said.

The work was painstaking, but the rocks told stories between the layers. It’s the story you hear in science classes growing up: Something huge, like an asteroid or meteorite, crashed into the Earth and what followed was catastrophic.

Whalen worked through the layers of rock, step by step.

The very bottom layer was granitic rock, Whalen said, which is material from 12 miles below the Earth’s surface that was uplifted during the impact event. Above that was molten material, from which the heat of the impact would have melted the surrounding rock.

On top of that layer, Whalen described a “chaotic deposit” of breccia, which is chunks of material broken up and deposited, falling back into the crater after the impact.

Whalen said the research has taught scientists more about these types of impact events, which helps in understanding planetary formation.

The immediate aftermath of an event such as this, as Whalen describes it, would have been devastation.

“The other sort of really important thing about this event is, it’s associated with this mass extinction that occurred at the end of the Cretaceous (Period) that wiped out the dinosaurs,” he said.

The team used radiometric dating to help prove that the crater is the one linked to the demise of the dinosaurs.

The debris that gets tossed into the air during impact would have spread all over the world, Whalen said. In fact, scientists have found droplets of molten material worldwide.

“We can date the molten material ... to the crater, and it has the exact same age as these droplets that you can find around the world,” he said.

“The First Day of Cenozoic," an article published Sept. 9 by researchers on the project, details the methods of extraction and analysis of the core. A section of the article, titled “Broader Implications,” begins as follows:

“In summary, the Expedition 364 core of the Chicxulub peak ring contains the most complete and expanded record of the immediate aftermath of the K-Pg mass extinction to date. Generation of a deep crater, with a large opening in the rim that allowed rapid flooding of the crater by seawater, produced accumulation rates among the highest known in the geologic record (130 m/d). Preservation of these extreme sediment accumulation rates within the impact basin allows us to resolve the geological processes that occurred over minutes to years after the impact event.”

Whalen and some UAF students continue to look at the core to study what would have followed the impact.

“So I’ve had two different grad students working on the project, and we’re just trying to understand what was going on in the Gulf of Mexico after the event so far,” he said.

Whalen said an event of this size would have caused widespread fires ranging out from the impact site, boiled the surrounding ocean water, caused tsunamis, triggered worldwide earthquakes and thrown sulfur into the air.

“Sulfur basically reflects sunlight back into space, and so that set up a short-term cooling event,” he said, adding that dust from the impact would have blocked out the sun, causing plant die-off. The release of carbon dioxide would have triggered a subsequent warming event.

In short, it would have been devastating to life on Earth. However, it might not have been this way for long.

One of the most surprising things Whalen said the group uncovered was published in an earlier article, “Rapid Recovery of Life at Ground Zero of the End-Cretaceous Mass Extinction.”

“We’re not positive exactly how long, but our best estimates now were things were living in the crater within five or six years of the event, and that’s really astounding,” Whalen said.

Previously, he said, they anticipated it would have taken hundreds, if not thousands, of years for life to return to the site of initial impact. Now, evidence of burrowing organisms in the sediment appears to show otherwise.

“So we were pretty surprised when we started seeing evidence of life not soon afterwards,” Whalen said.