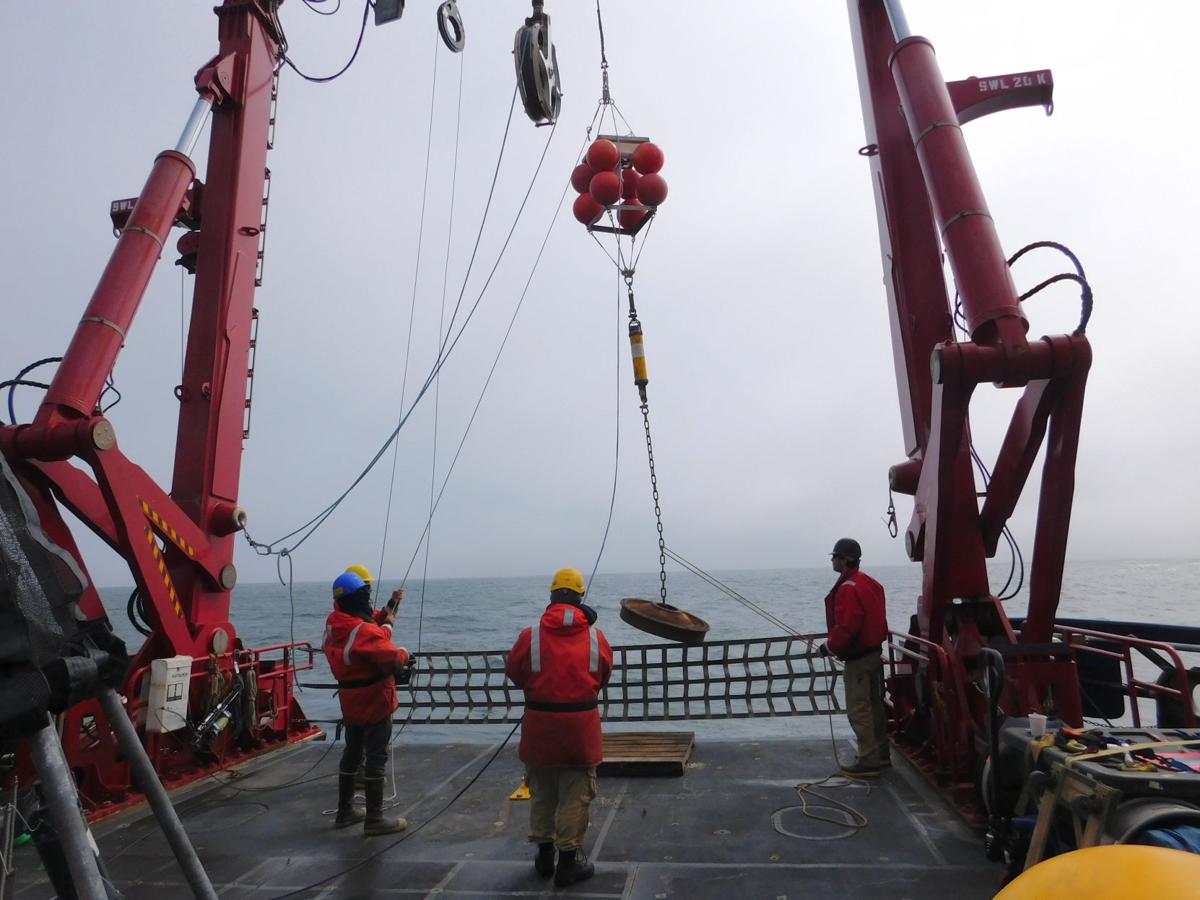 Ship crew and technicians deploy a mooring that will make measurements for an entire year underwater. At the end of the year, an acoustic release command is sent to the mooring and the tether lets go of the anchor and the floats carry the instruments back up to the surface. Photo courtesy Seth Danielson 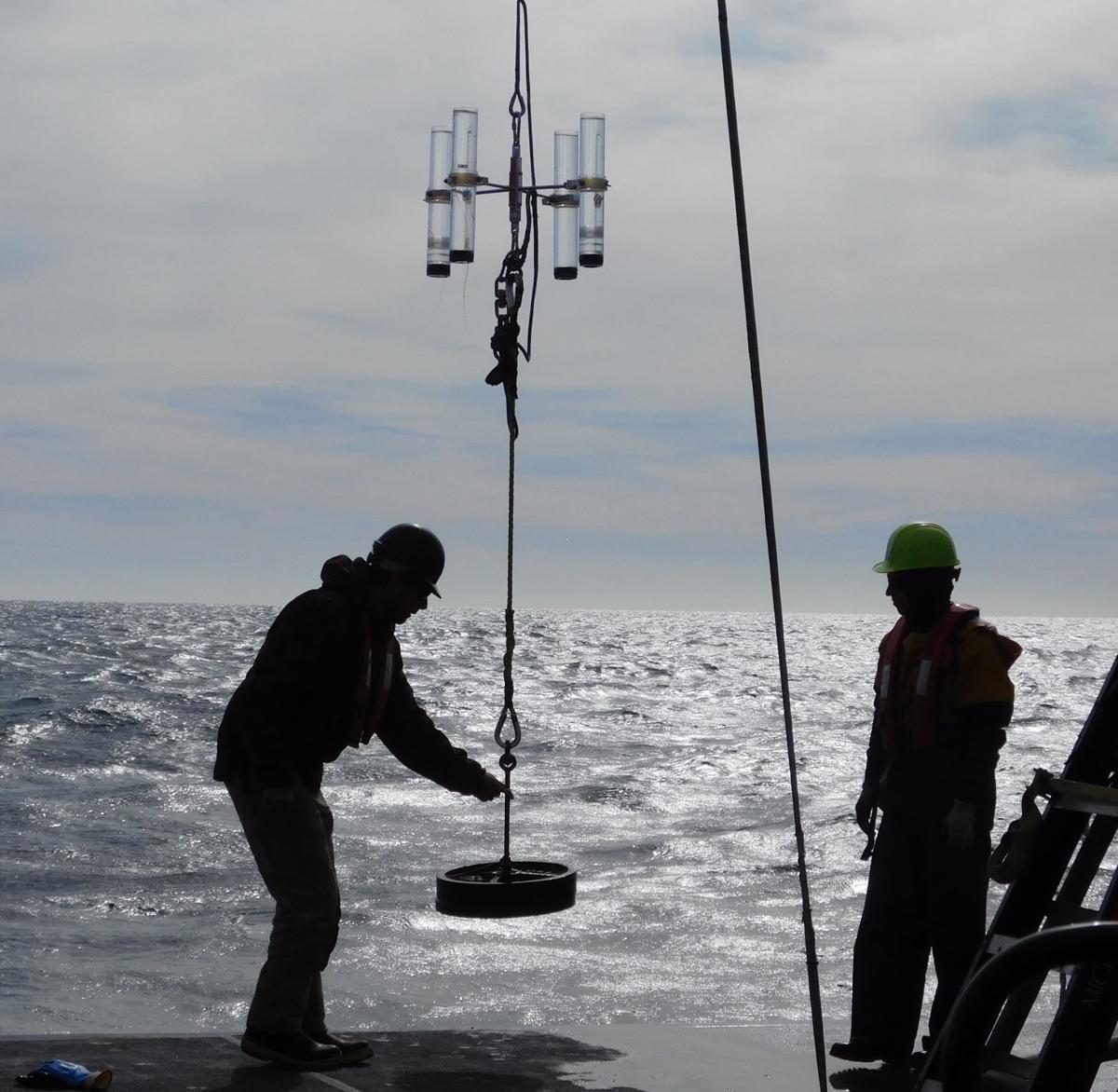 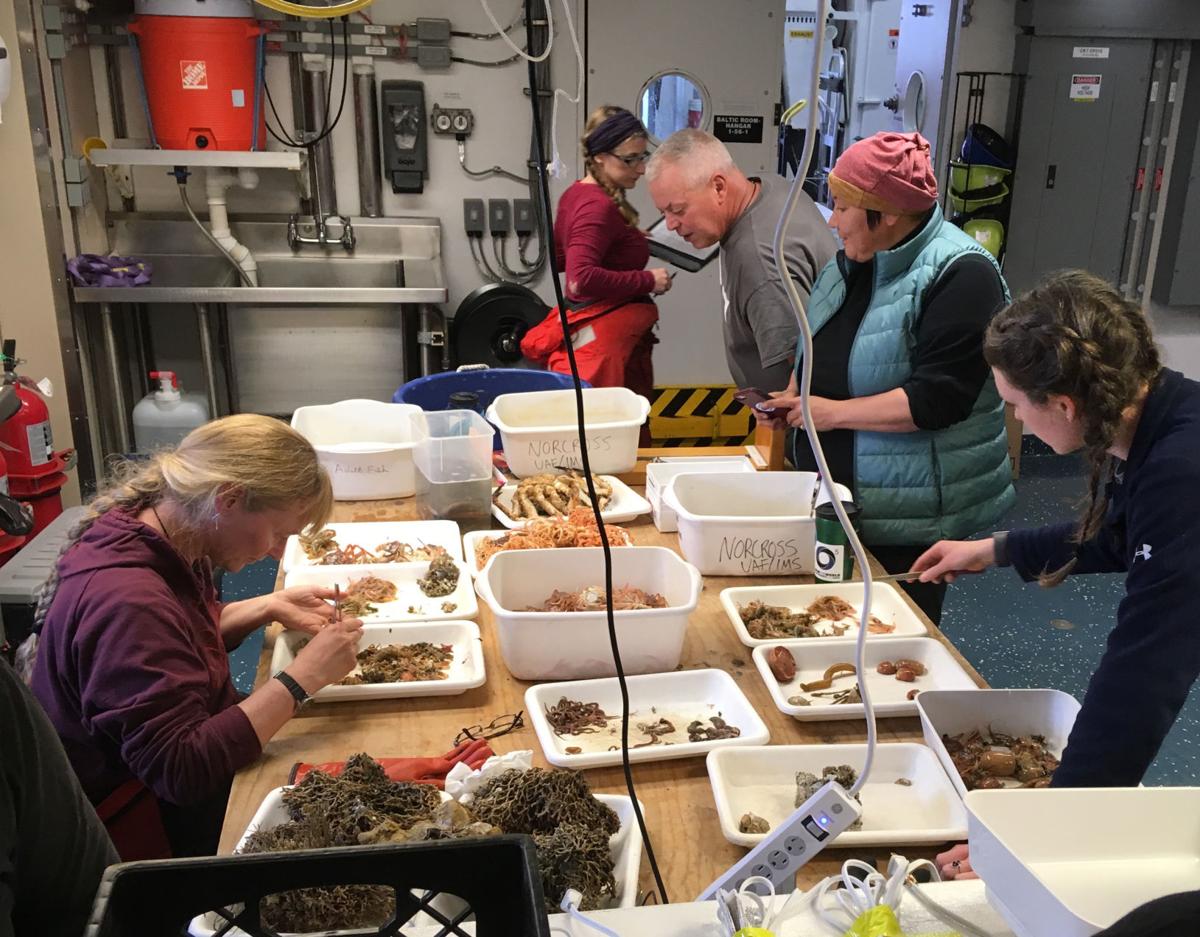 The catch of a seafloor trawl is sorted to individual species and each are counted. Photo courtesy Seth Danielson 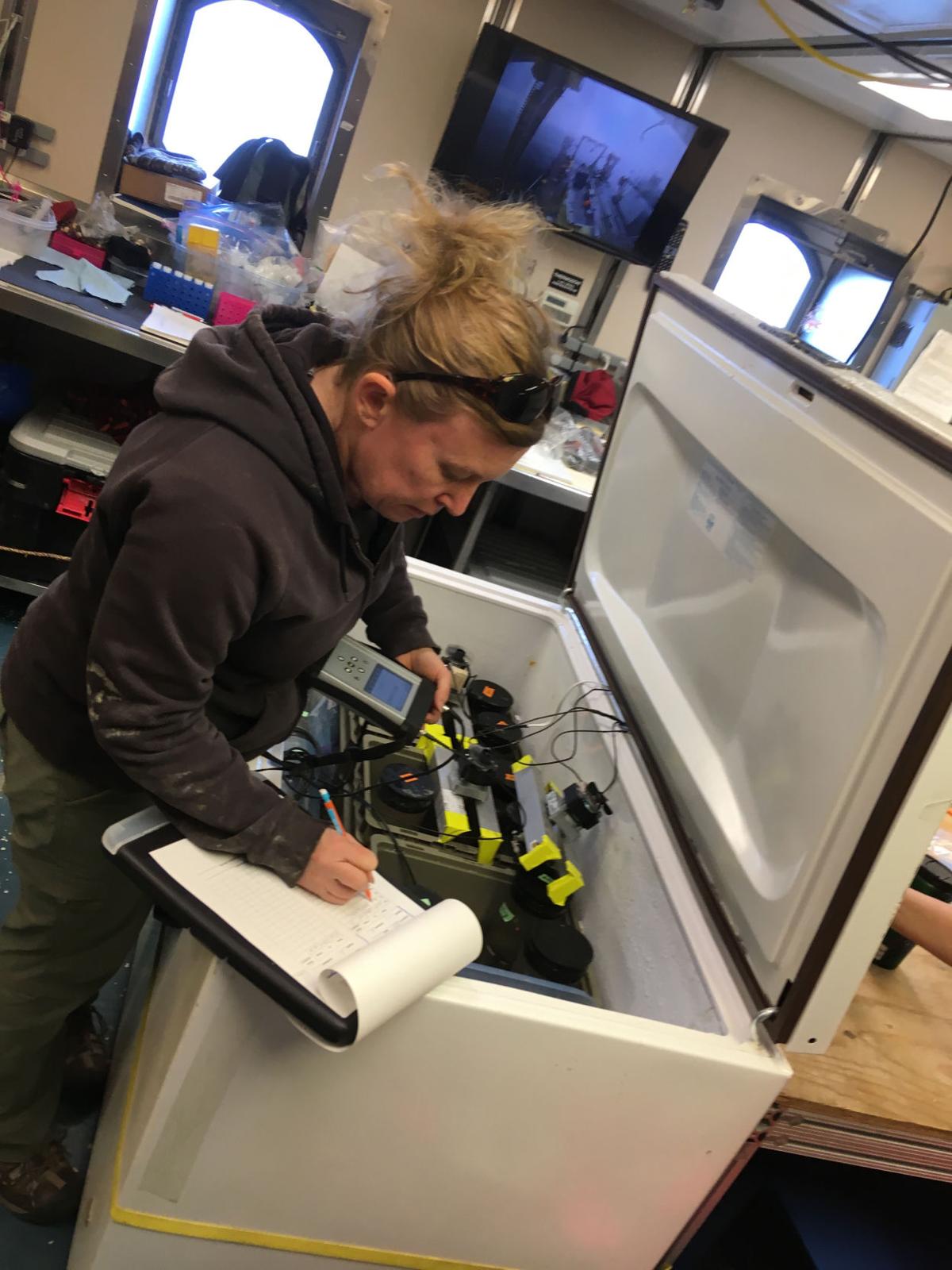 Ship crew and technicians deploy a mooring that will make measurements for an entire year underwater. At the end of the year, an acoustic release command is sent to the mooring and the tether lets go of the anchor and the floats carry the instruments back up to the surface. Photo courtesy Seth Danielson

The catch of a seafloor trawl is sorted to individual species and each are counted. Photo courtesy Seth Danielson

Arctic waters are changing, and scientists have been watching the seas off the western coast of Alaska to monitor marine ecosystems — from water temperatures to algae, fish and more.

Seth Danielson, an oceanographer and associate professor at the University of Alaska Fairbanks' College of Fisheries and Ocean Sciences, was the chief scientist on the project and gave an update on the researchers’ activity on Wednesday, briefly covering the interdisciplinary components of the research. The research is funded by the North Pacific Research Board, a board established by Congress that grants research funds for this area of the ocean.

“Their approach is to try to bring together multiple funding agencies, multiple researchers in a fairly large top to bottom ecosystem study,” Danielson explained during his presentation at UAF.

The Arctic Shelf Growth, Advection, Respiration and Deposition project involves a team of researchers from UAF traveling to the Bering Strait and Chukchi Sea areas on a ship named Sikuliaq for three weeks in June over the past two years.

ASGARD falls under NPRB’s Arctic Integrated Ecosystem Research Program. The UAF group proposed the project to the board in a bid to be selected for research in the area.

“We were lucky enough to be successful with that competition,” Danielson said.

The subject they’re studying, according to Danielson, is how reductions in sea ice and associated environmental changes influence the flow of energy through the ecosystem.

“I think that there’s enough to keep going after here,” he said as he wrapped up his Wednesday presentation.

Normally, the area the project explores is inaccessible for large portions of the year, due to the presence of sea ice. Having an expedition as early as June allowed the team to gather data from the seas that is underrepresented in research.

One of the intriguing things about the spring expedition, according to Dean Stockwell, a biological oceanographer working on the project, was that when the research crew arrived in Nome in 2017, there was open water.

Stockwell said he had his fingers in several pots during the two expeditions. His main focus, however, was the phytoplankton. Due to the lacking ice, he was able to measure how fast phytoplankton populations in the area were growing.

“So what we’re seeing is an earlier development of open water, which allows the phytoplankton then to grow at an earlier time in the area,” he said.

“In a sense, yes, phytoplankton are plants, but they’re in that algae group,” Stockwell said. “They’re not like a rose bush, basically, so they’re very simple plants.”

Though they may be microscopic, phytoplankton are one part of the larger picture of productivity in the area.

“So in the spring, when the sun first hits that area, the bottom part of the ice allows the sun to come through,” he said. Phytoplankton ranging from single-celled plants to larger-celled diatoms grow on the bottom of the ice, then fall through the water as the ice melts.

When the phytoplankton fall through the water column, Sarah Hardy and Caitlin Forster’s research comes into play. Forster is a graduate student who was observing the fish in the area, while Hardy, an associate professor, was looking at benthos, organisms that live on the seafloor.

“Our main purpose is to try and figure out what the role of the benthic organisms is in consuming all these materials in the ice break up and the spring phytoplankton bloom,” Hardy said.

Hardy said that, oftentimes, she thinks microscopic organisms can be overlooked because it can be difficult to see the direct link to the larger marine mammals. It all comes down to the food web, though. Walruses, whales and other predators like to eat benthos, and benthos eat the phytoplankton.

“Everybody eats somebody else, so these smaller things that are food for larger things help make the system function,” she said.

Something else that makes the system function is where Danielson’s research came into play. He was looking at a crucial aspect of marine life: the water.

Danielson’s work with a conductivity-temperature-depth device measured water temperatures during their trip through the seas, alongside a number of other variables, such as salinity and nutrients.

The team also had a device that sat on the sea floor with a wire extending to a buoy. This device would take in periodic data for a full year.

“We found that it was incredibly warm in the water year-round,” he said

He added they expect to see temperatures right at the freezing point during winter, but their findings indicated the ocean was sitting about 1 or 2 degrees above freezing.

What Hardy discovered among the benthos was a 30 percent increase in “energy demand.”

“So that suggests that at those warmer temperatures they’ll require 30 percent more food essentially than they do at zero degrees (Celsius),” she said.

Meanwhile Forster, who is graduating with her master’s degree next month, noticed something surprising about the fish population.

“One of the biggest findings we’ve had was actually what wasn’t there,” she said.

Forster said Arctic cod, which the scientists know are abundant in the area from prior research, had little presence among the fish brought up in the trawl for inspection.

“It helped us think about the life cycle of this species in a new way,” she said.

Forster said the fish she was looking at were not the kind people usually catch for food. But, much like benthos, the fish are food for larger marine life and birds.

The changes to the environment notably have an impact on coastal communities.

An example that came up during Danielson’s talk Wednesday is the presence of toxic algal blooms.

Stockwell tested phytoplankton on the expedition for paralytic shellfish poisoning. Normally, these types of toxins do not thrive in colder water conditions; therefore, the chances of either benthos or fish ingesting the blooms and then, in turn, being consumed by other predators haven’t been a problem until recently.

“Now with kind of warmer water pushing through the straits at an earlier time, these harmful algae have more of a chance to extend up to the Chukchi and get eaten, and put into the food chain,” he said. “And so that’s why I’m kind of worried about a warmer Chukchi Sea, if you will.”

According to Stockwell, some coastal communities have begun to open up labs to test food.

Stockwell is waiting for some of his 2018 samples to be analyzed, but determining what everything means will require everyone from the expedition to compile their results.

“We’ll put (everyone’s results) all together, but it’s like building a house,” he said. “You have to at least get all the parts there first.”

Stockwell also cautioned the team has only a “snapshot” of time. Systems are constantly changing; the environment can be in flux, then plateau and change again.

“We’re in one of these fluxes right now where things are changing pretty fast,” he said.

Beyond the warmer temperatures affecting the food chain, the ice receding is presenting problems for coastal life.

“So, for instance, erosion along various Alaskan coastlines is very high in places where we no longer have as much sea ice as we used to,” Danielson said, “because now we have bigger waves of the ocean and the bigger waves are coming to shore.”

He added that, even if sea levels aren’t rising anywhere near Fairbanks, the effects of climate change is something that society will be deciding how to address in coming years.

“But (ASGARD’s) focus is really on trying to get a better handle on how the ecosystem of the northern Bering and the Chukchi Sea is going to adjust over the time scale of the next 10 to 20 years,” Danielson said, “and how these changes in the reductions of sea ice over this time are going to impact the flow of energy and the productivity.”

The data from the past two years still is being compiled for analysis, peer reviewing and publication.

Readers interested in some of the day-to-day research that took place during the expedition can visit bit.ly/2VVVTXB. The reports published online come from principal investigators and community observer Opik Ahkinga. This information is not the research crew’s finalized data analysis.