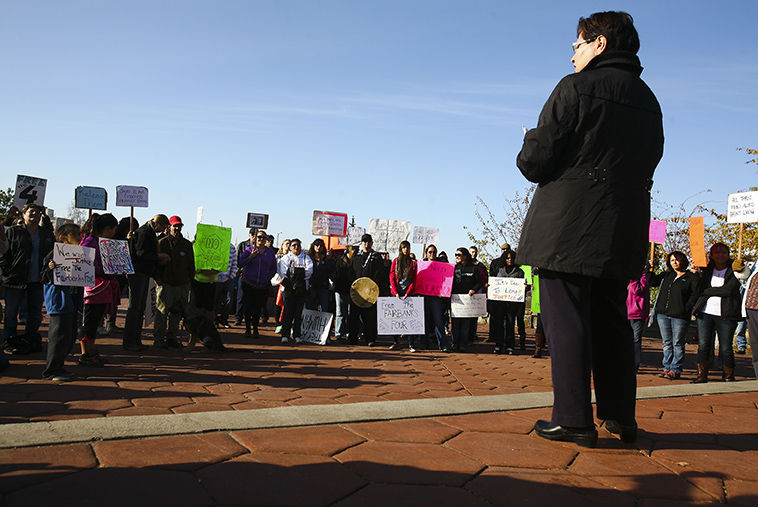 Shirley Lee speaks during a rally to free the Fairbanks four at Golden Heart Plaza on Saturday, September 27, 2014. 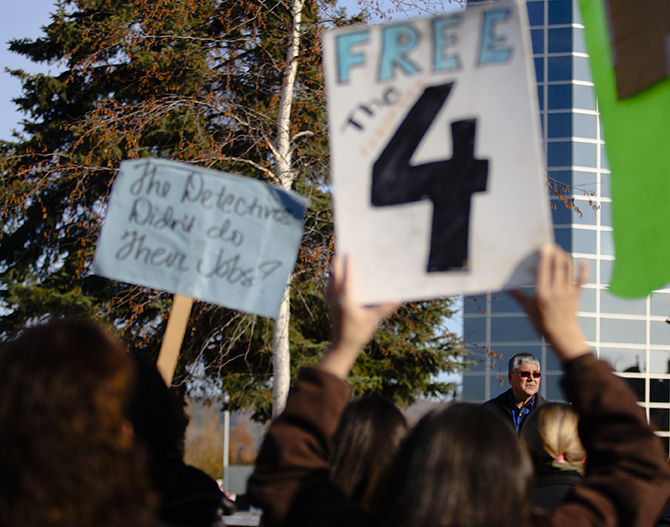 Steve Ginnis speaks during a rally to free the Fairbanks four at Golden Heart Plaza on Saturday, September 27, 2014. 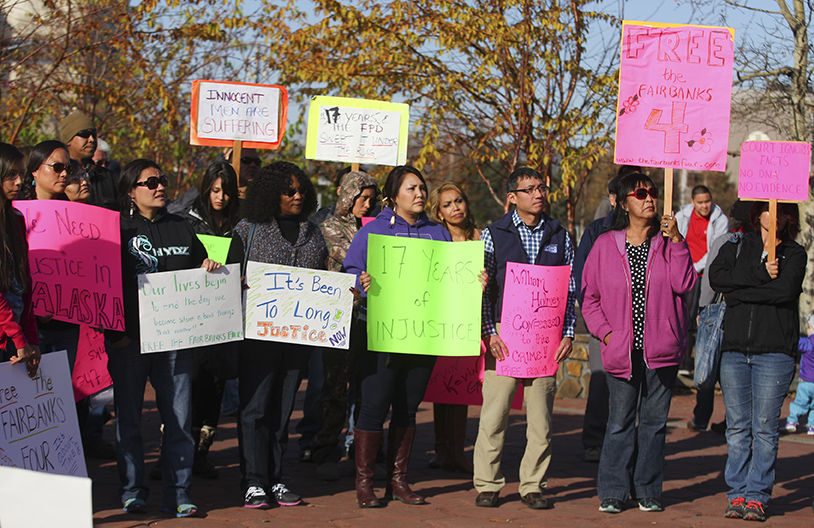 People hold posters and listen to speakers during a rally to free the Fairbanks four at Golden Heart Plaza on Saturday, September 27, 2014. 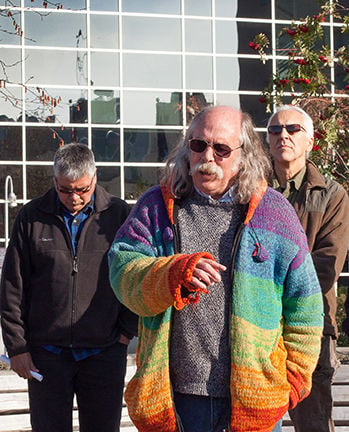 Flanked on left by Steve Ginnis, Fairbanks Native Association director, the Rev. Scott Fisher, of St. Matthews Episcopal Church, closes Saturday’s protest rally in Golden Heart Park with a prayer for resolution of the Fairbanks Four’s innocence claims and justice for murder victim John Hartman. To his right is Will Mayo, of Tanana Chiefs Conference. 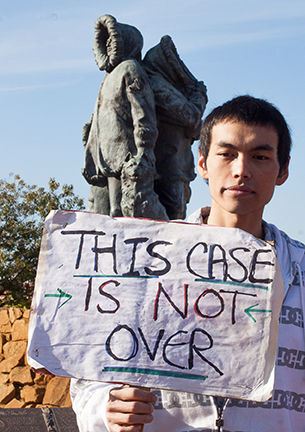 Shirley Lee speaks during a rally to free the Fairbanks four at Golden Heart Plaza on Saturday, September 27, 2014.

Steve Ginnis speaks during a rally to free the Fairbanks four at Golden Heart Plaza on Saturday, September 27, 2014.

People hold posters and listen to speakers during a rally to free the Fairbanks four at Golden Heart Plaza on Saturday, September 27, 2014.

Flanked on left by Steve Ginnis, Fairbanks Native Association director, the Rev. Scott Fisher, of St. Matthews Episcopal Church, closes Saturday’s protest rally in Golden Heart Park with a prayer for resolution of the Fairbanks Four’s innocence claims and justice for murder victim John Hartman. To his right is Will Mayo, of Tanana Chiefs Conference.

FAIRBANKS — When the news conference was over that September day a year ago this past week, Alaska Native leaders, the Alaska Innocence Project’s lawyer and several dozen friends and relatives of the “Fairbanks Four” who had gathered below the glassy Fairbanks courthouse bowed their heads and clasped hands.

“Father,” the Rev. Scott Fisher, of St. Matthew’s Episcopal Church, prayed as chimes sounded from a nearby clock tower, “we call upon those given legal authority to act now, for the night’s over and daylight’s coming.”

The occasion was the Alaska Innocence Project’s announcement of a legal offensive to clear men convicted of murdering John Hartman, a 15-year-old found beaten and unconscious one early morning in October 1997.

The “new evidence” filed with the court that day started with a sworn statement from William Z. Holmes, a former Fairbanks rapper serving a double-life sentence for unrelated murders in California. The inmate, now 34, confessed that he and several Lathrop High School classmates had been out cruising for drunken Natives to stomp when they happened upon a lone white boy. A few days later they read about Hartman’s death in the newspaper.

A year later, four other men convicted of murdering Hartman, a different group including three Athabascans with family ties throughout Interior villages, remain locked up, some with decades left to serve. No end appears to be in sight for the state review touted by the governor last fall. From tribal councils and City Hall to U.S. Senate chambers, drums are beating for federal authorities to get involved.

“Of course, it’s very discouraging that there hasn’t been more action,” Shirley Lee, justice chair of Tanana Chiefs Conference, said last week as she prepared for Saturday’s “Unlock the Doors” protest at Golden Heart Park. Just more than 100 people turned out for the afternoon rally staged near the park’s statue of hooded settlers. Hand-written signs from past street marches were back in abundance. “Free the 4,” one read. “Too many alibis for a case,” declared another.

In contrast with last year, frustration colored this day’s speeches.

“This is a long time that these young men have been sitting in prison,” said Steve Ginnis, director of Fairbanks Native Association. “When the truth is there!

Fairbanks city Mayor John Eberhart, one of several elected officials present, spoke about the importance of sending a message this political season.

“I wouldn’t have won without Alaska Native support,” he said.

When the “Battle Hymn of the Republic” sounded on the clock-tower carillon, Lee paused her speech. The crowd soon picked up the words, singing, “his truth keeps marching on.”

Inside the Rabinowitz Courthouse, arguments churn behind closed doors over a confidential file. Judge Paul Lyle recently scheduled his first evidentiary hearing in the case for Nov. 10, 13 months after Holmes’ claimed confession focused attention on efforts to overturn convictions against George Frese, Kevin Pease, Marvin Roberts and Eugene Vent. Frese, age 20 back in 1997, was the oldest suspect arrested. He’s now 37 and a grandfather.

“In my mind,” he said, “it’s pretty wild that we’re just getting a preliminary hearing in November 2014.”

“Ongoing” is the term Special Prosecutor Adrienne Bachman used describing the status of her team’s review. “I don’t think one could ever say that this investigation is over,” she wrote this week, fielding questions by email.

The prosecutor encouraged people with information about the case to share it with the agency they feel “most comfortable” talking to. She specifically mentioned her office, Alaska State Troopers, Fairbanks police and the Innocence Project.

Out on the streets, the delay appears calculated to some.

“I’m not surprised but I’m pretty sickened,” said April Monroe Frick, whose crusading “Free the Fairbanks Four” blog and Facebook group built political and financial support for the Innocence Project’s work. “I think it’s sad and revealing in terms of how little has changed in the last 17 years.”

Not only the police but also “the judges, I am sure, do not want to admit wrongdoing,” said oilfield roughneck Edward Vent. He believes that his nephew, Eugene, weeks shy of 18 when arrested, was “screwed from the get go.”

As he puts it, “even Ray Charles could see they didn’t do it.”

Persistent attention given the case offends others, particularly those who view the verdicts as just payment for the victim’s suffering.

“We are disgusted by the support these murderers have and get,” messaged Christopher Kelly, the victim’s older brother. “They don’t deserve it.”

The family is looking ahead to opposing Vent’s pending parole application.

In August, TCC renewed calls for a federal review. The latest justification: a memo showing Fairbanks police received notice of a California inmate’s confession as early as December 2011.

Eberhart, a former TCC attorney, also backs bringing in federal authorities. He stops short of supporting an independent review of city police. Eberhart said he’ll take that up when a replacement is hired for Laren Zager, the police chief who retired not long after the California prison memo became public.

“Leave no stone unturned,” Sen. Lisa Murkowski wrote U.S. Attorney General Eric Holder last October. She closed by quoting Zager’s comment to the News-Miner the day of the filing. “The last thing any officer wants to see is an innocent person sitting in jail.”

Thursday, Alaska’s senior senator was described, by staff, as “extremely frustrated and disappointed by the bureaucratic inertia” the Justice Department has displayed “when it comes to looking into the case.” She now views Holder’s announced departure as possibly “new urgency for fact-finding,”

“I would hope,” he stated by email Friday, “that it would be a priority for the governor to ensure that no Alaskan is unjustly deprived of his or her freedom. Sadly, this does not appear to be the case.”

It was Vent, then a few weeks shy of 18 and heavily intoxicated, whose confession gave early direction to the 1997 investigation by Fairbanks police. Vent had been picked up following a reported ruckus and alleged armed assault at Alaska Motor Inn. His interrogation continued as Hartman — unconscious and still unidentified —clung to life in Fairbanks Memorial Hospital’s intensive care unit.

Later that same day, Frese turned up at the hospital after hurting his ankle in a fight he said he was too drunk to recall. Detectives had his confession, too, before the young Hartman died the following night.

Both Frese and Vent later claimed they were manipulated by fictitious evidence and case scenarios put forward by the detectives. Such practices are now recognized as potentially contributing toward false confessions from impaired subjects.

The district attorney told grand jurors that either Vent or Frese, perhaps both, would be testifying for the state. Instead all four pleaded innocent and three trials were held. First, came Frese. Then Vent. Pease and Roberts faced charges together. Three separate juries all returned guilty verdicts.

Pease’s verdict was overturned in 2004, following discovery of jury misconduct by UAF journalism students. He never saw freedom before the verdict was reinstated in an appellate decision upheld by the Alaska Supreme Court in 2009.

Vent’s case has remained under active appeal due to challenges his defense attorney brought over trial Judge Ben Esch’s curbs on testimony about “persuaded confessions” by Richard Leo, a University of San Francisco law professor.

Vent, Pease, Roberts and Frese were current or former students at Howard Luke Academy, an alternative school with a substantial Native student body.

The victim’s brother, Kelly, knew them all during his stints in prison for burglary and other crimes years ago. He doesn’t buy their innocence claims.

“Start looking at their behavior from a killer’s point of view,” he texted Wednesday. “They just want to get away with it.”

Roberts is slated for parole this coming spring. His original sentence, at 33 years, was the most lenient. Vent got 38 years and Pease, 77. Frese, whose confession was the most graphic, drew 79 years, plus 20 more for a prior robbery conviction that he also disputes.

The four have served time at prisons as far away as Arizona. They’re now scattered among three Alaska institutions located near Wasilla, Palmer and Seward.

“It’s pretty intense,” the governor told the News-Miner during an unrelated visit to the University of Alaska Fairbanks. “It’s a pretty thick file.”

As it happened, the city again hosted the Alaska Federation of Natives convention two weeks after Holmes’ confession became public. In a first, Alaska’s powerful statewide assembly of Native corporate and tribal groups lent official support to the four convicted men. “Right the wrongful conviction of four innocent men,” a resolution states. “This support takes the form of continuing to demand that the state of Alaska ... re-examine the case to see that justice is done.”

The last week of October 2013, Bachman and the pair of Cold Case Unit investigators set up shop for two days at the Fairbanks Police Department.

“The review will take many months,” she told the News-Miner. She explained that her team had to backtrack and examine the full case before “thoroughly and thoughtfully investigating” the new allegations.

A year after the Innocence Project filed its paperwork, prayers turned toward hunts for the truth and ensuring justice for the victim.

“The last month people have walked through the woods,” the Rev. Fisher said at Saturday’s rally. “We’ve called and we can hear the moose coming.”

Brian O’Donoghue, a UAF professor and former News-Miner reporter, has been researching the Hartman case with the help of journalism students since 2001. Over the years, results of UAF’s public service investigation have been shared with all interested parties, including tribal organizations, Alaska Innocence Project, Fairbanks Police Department and the district attorney’s office.