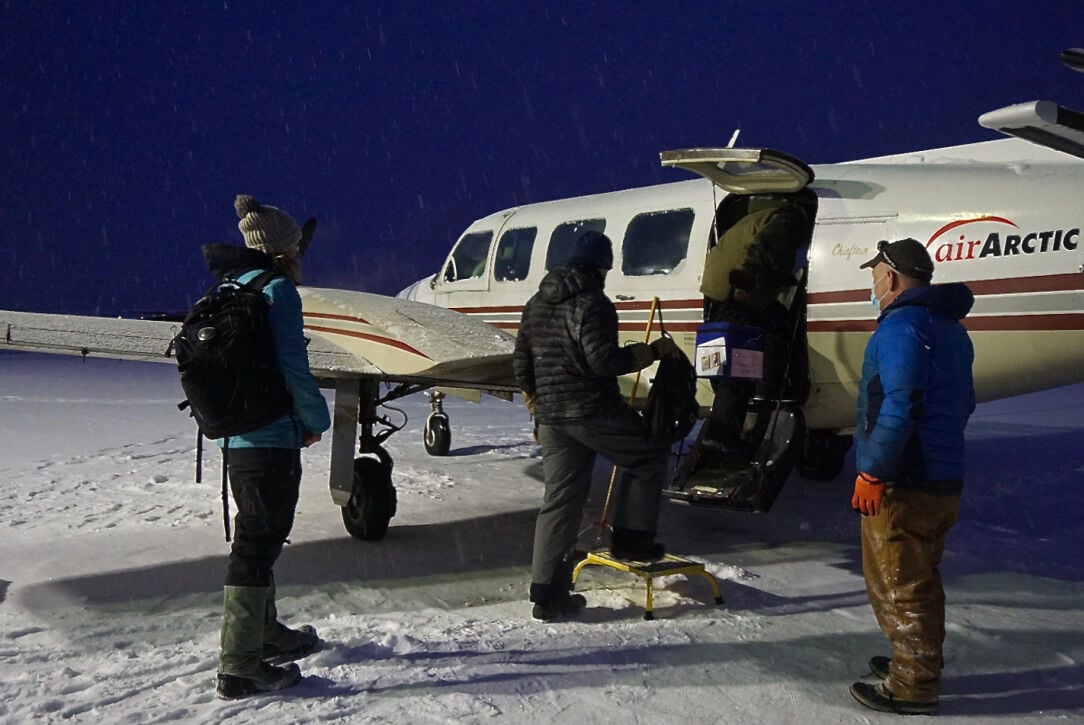 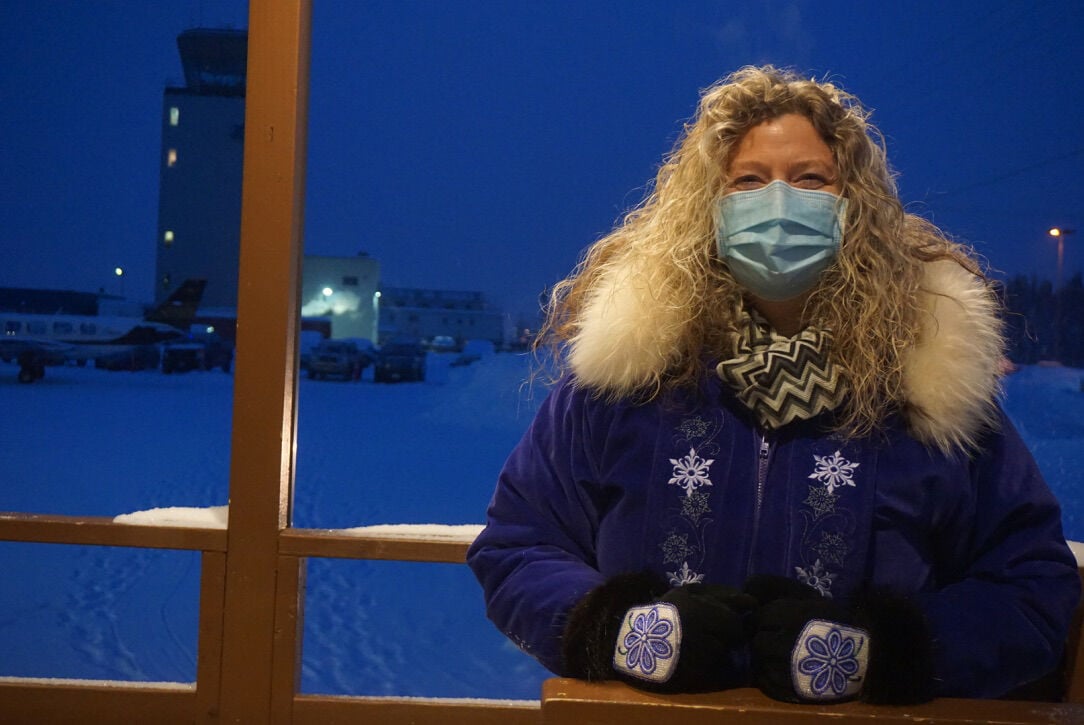 Crystal Stordahl, a community health aide program director who also oversees the logistics of the flights, waits to board a flight early Tuesday morning to deliver COVID-19 vaccines to rural Alaska. Alena Naiden/News-Miner 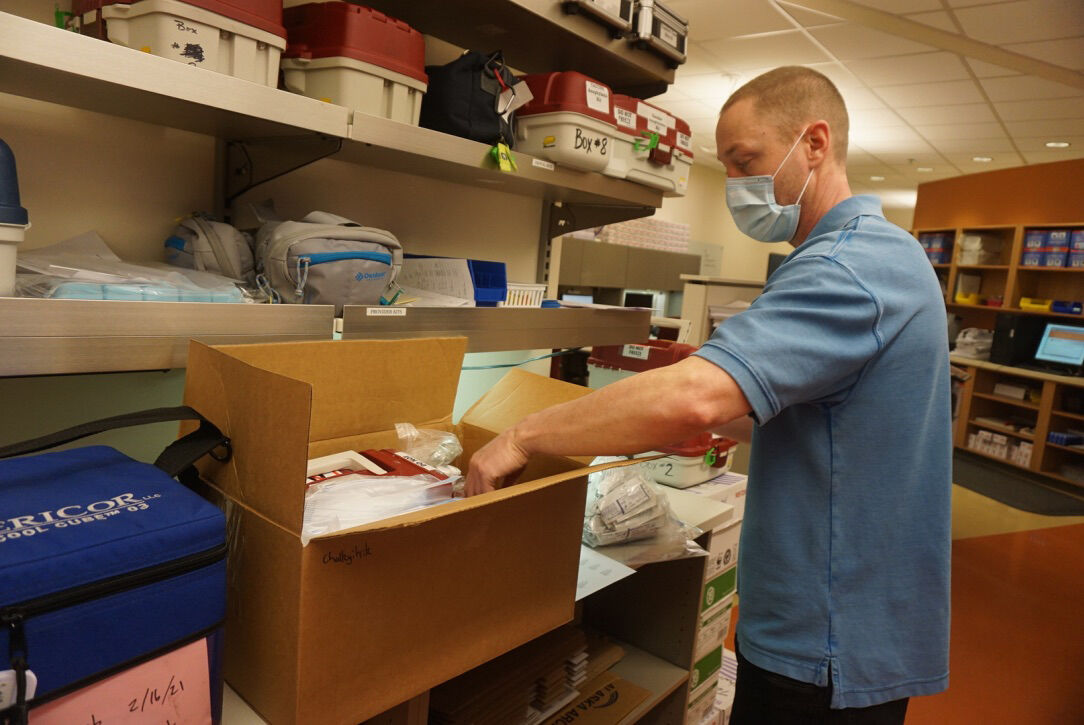 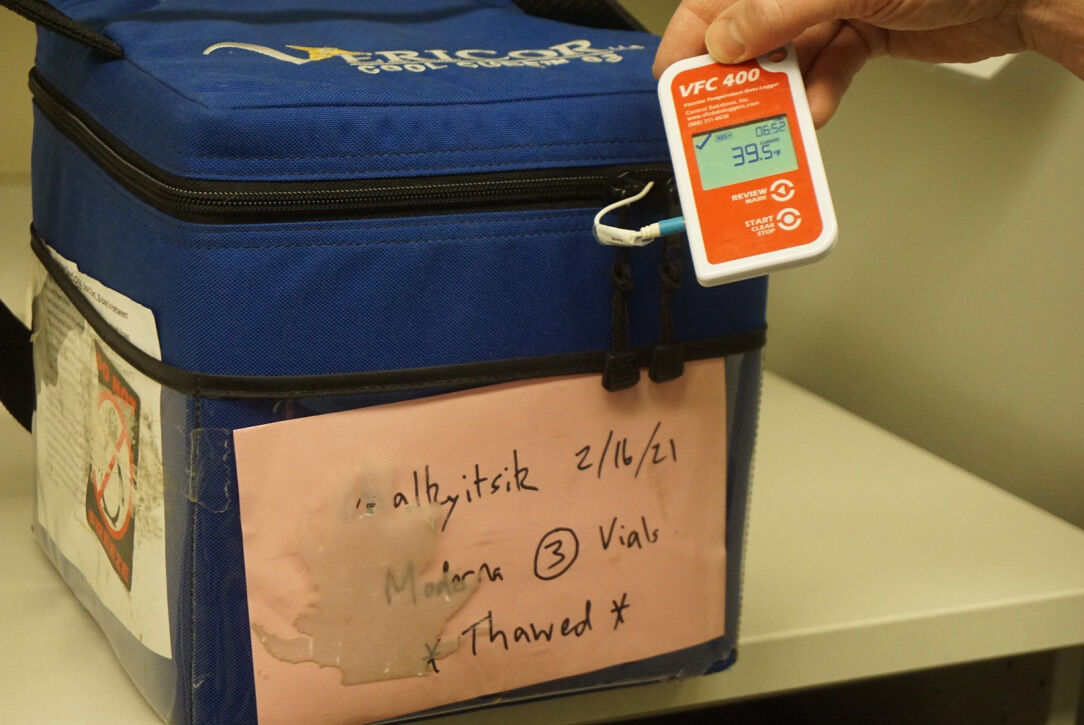 A cooler carrying the thawed Moderna vaccine is kept at a comfortable 39.5 degrees. Alena Naiden/News-Miner 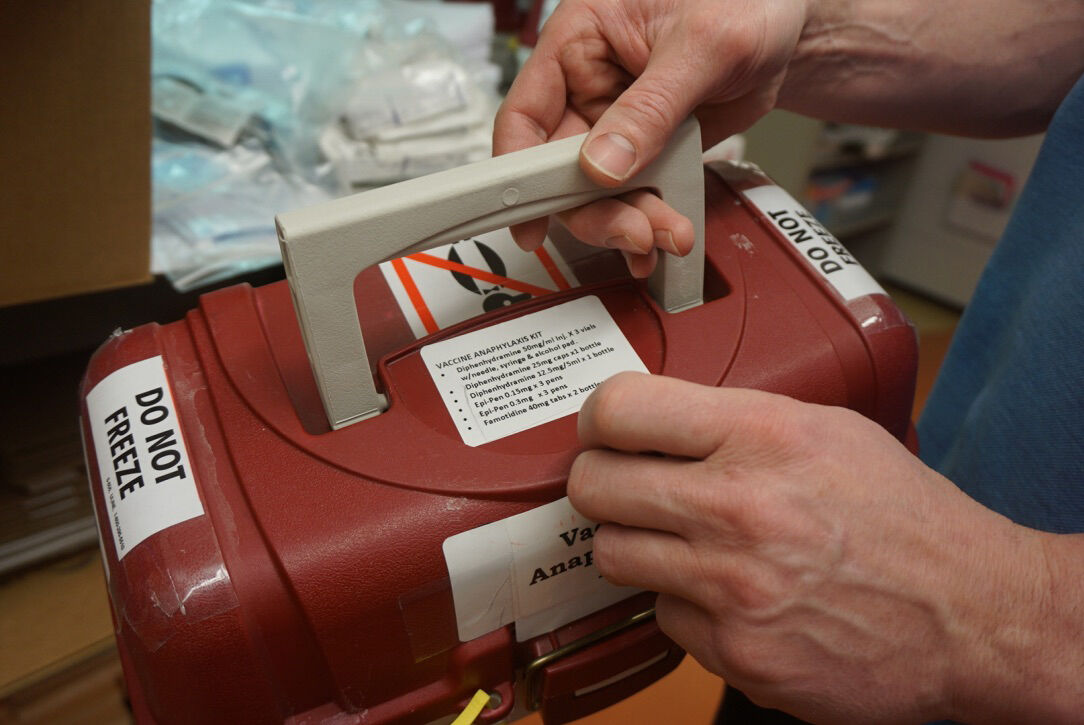 Health officials prep an anaphylaxis kit to take with them, should anyone who receives the vaccine suffer a reaction. Alena Naiden/News-Miner 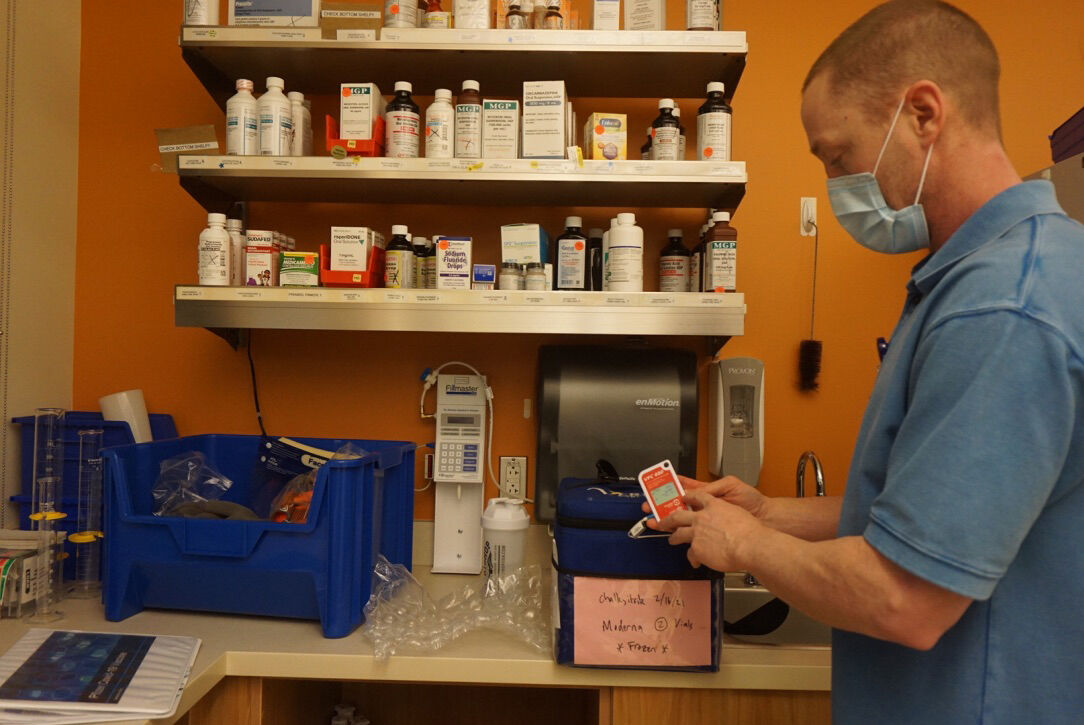 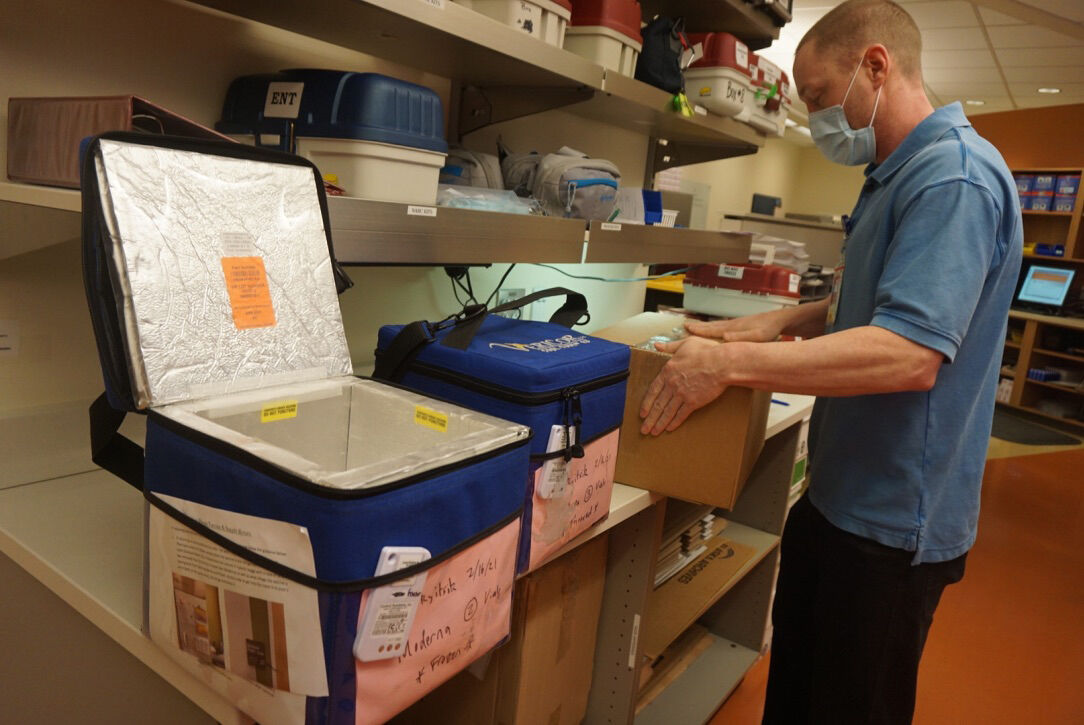 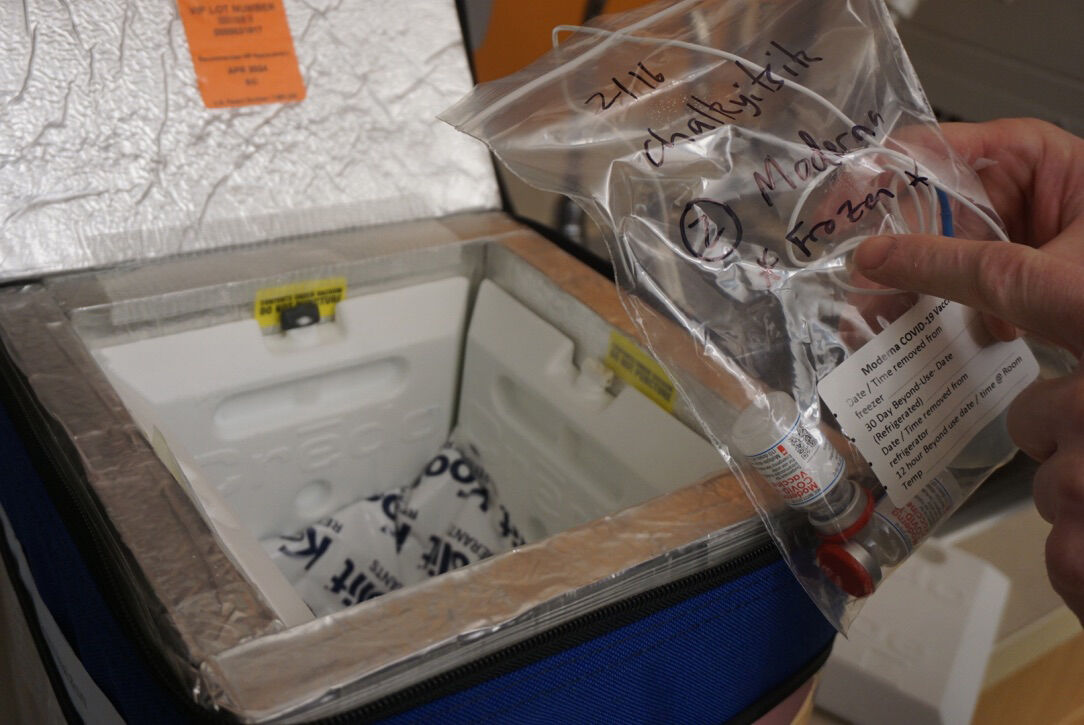 The frozen Moderna vaccine is ready for delivery. Alena Naiden/News-Miner 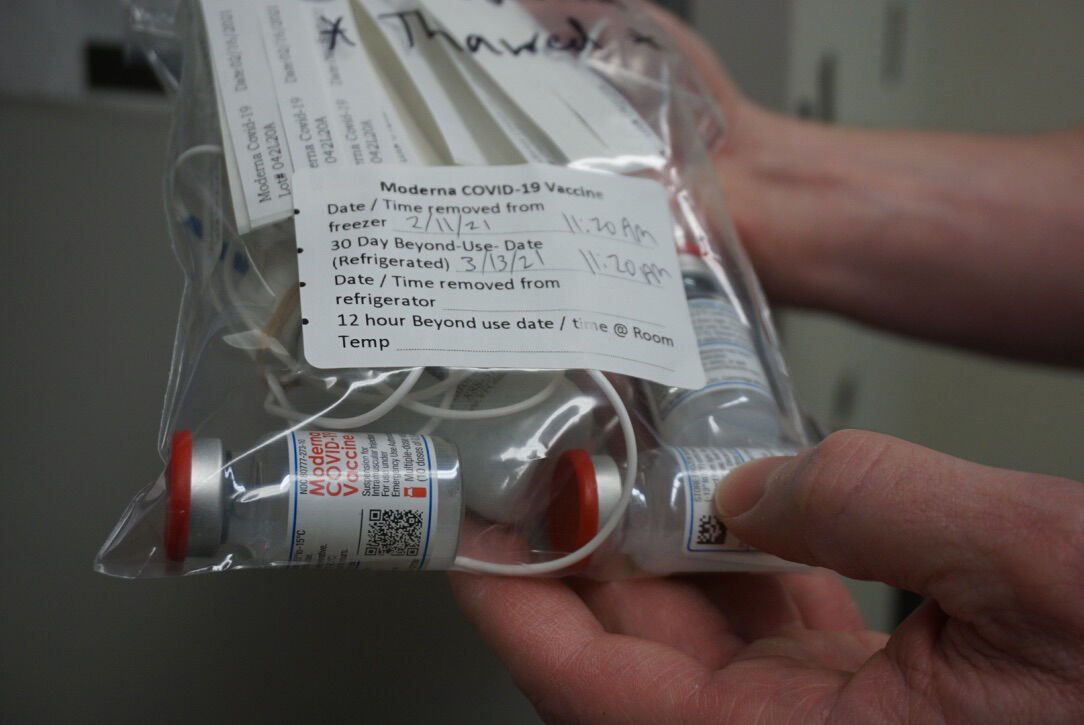 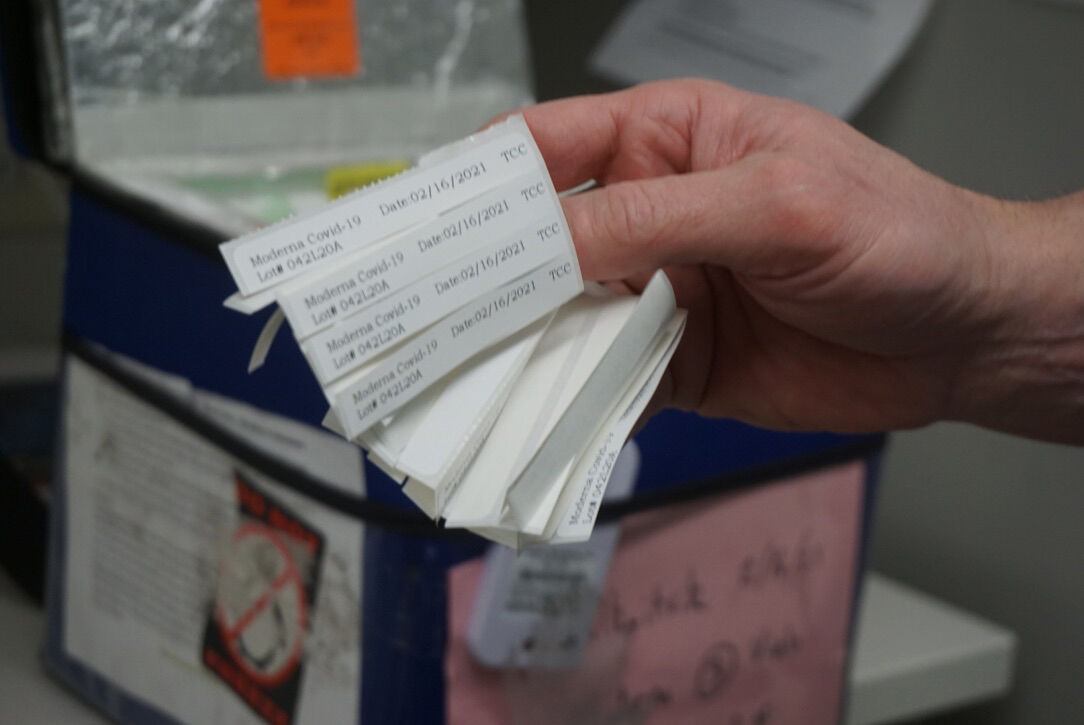 Each vial of vaccine gets a label identifying it. Alena Naiden/News-Miner 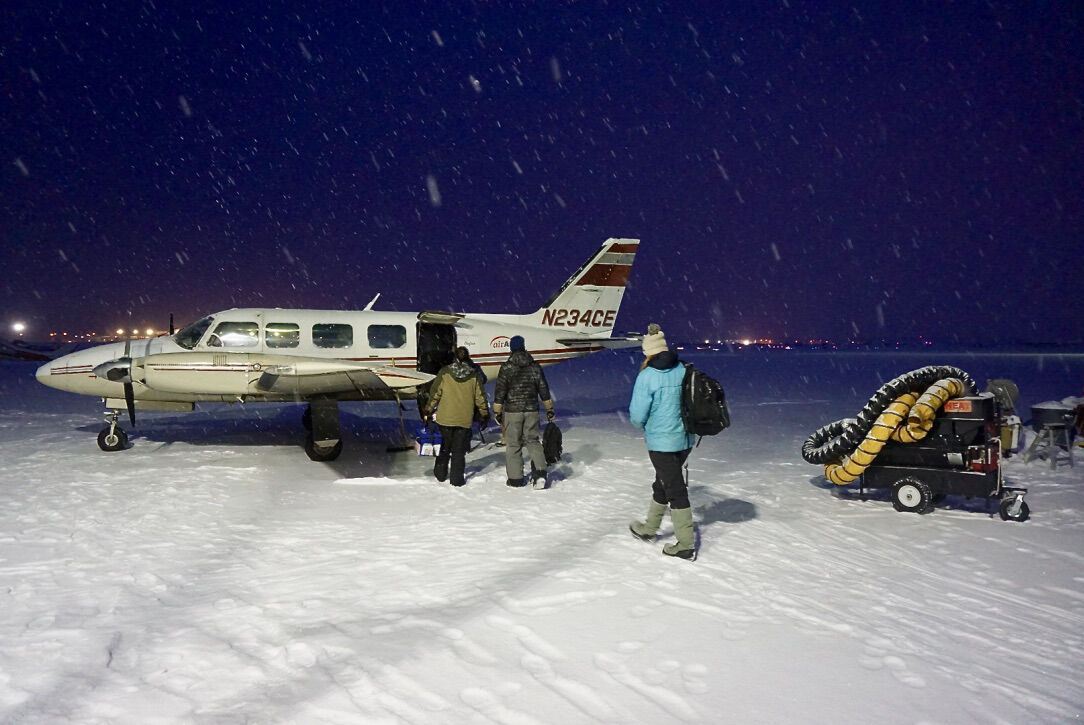 Crystal Stordahl, a community health aide program director who also oversees the logistics of the flights, waits to board a flight early Tuesday morning to deliver COVID-19 vaccines to rural Alaska. Alena Naiden/News-Miner

A cooler carrying the thawed Moderna vaccine is kept at a comfortable 39.5 degrees. Alena Naiden/News-Miner

Health officials prep an anaphylaxis kit to take with them, should anyone who receives the vaccine suffer a reaction. Alena Naiden/News-Miner

The frozen Moderna vaccine is ready for delivery. Alena Naiden/News-Miner

Each vial of vaccine gets a label identifying it. Alena Naiden/News-Miner

It’s 6:30 a.m. in the morning in the empty Chief Andrew Isaac Health Center, and pharmacist Brant Herman is preparing two boxes to fly to Chalkyitsik in a couple of hours. Band-Aids, syringes, the list of patients, their allergy information, vaccination cards all go into a box — but most importantly, vials of the COVID-19 vaccine.

“We are giving about 200 shots a day in total,” Herman said. “We should be able to get everyone not that far away.”

Tanana Chief Conference serves 42 villages in the Interior, and they visited every one of them to offer the first shot and almost all of them to offer the second. After vaccinating senior patients, TCC made the vaccine available to all their clients older than 16, as well as their household members, reducing the logistical work of getting the vaccine out, vaccinating more people and raising the chances to reach herd immunity.

“In all our villages, everyone is eligible, and if you are in the community, you are a patient of ours right now, because we want to take care of the whole community,” said Crystal Stordahl, the community health aide program director who also oversees the logistics of the flights.

Back in the health center, everything gets labeled, cushioned with bubble wrap and put into a cooler with temperature monitor devices. Three vials of Moderna — the vaccine easier to transport — go into one box thawed, and Herman gets another two vials from the freezer.

“These are two more for Chalkyitsik, frozen,” Herman explains. “We want them to go out frozen, and if the team gets more people, more interest in the village to come to get more shots, then they can pull one out of there. It can thaw in a refrigerator for two hours or one hour at room temperature.”

On every trip, the TCC team tries offering everybody a vaccine, but when they go back for the second dose, they always find a handful of new people wanting it.

“They are like, ‘OK, my cousin got it, my mom got it, and it seems like it’s a good idea,’” Stordahl said. “And we are going to vaccinate them. We are just going to do what we have to do.”

If there are no extra people to vaccinate in the village, the frozen vials can fly back, as opposed to the thawed ones which can be only transported once.

Separately from the vaccine boxes, Herman prepares a box with treatments for potential allergic reactions, though so far, the vaccinations “have been smooth, knock on wood,” said Lisa Donat, the home care program coordinator who monitors people after they get their shots.

Overall, there is a lot of planning at every stage, especially because in many of the villages the team can’t access electronic health records.

“There is a ton of work that goes into getting ready and helping make that day go as smoothly as possible,” Stordahl said. “Because once you’re out there, you’ve got what you got, as far as people, as far as vaccines, and as far as the paperwork.”

Around 7 a.m., everything is ready at the health center, and Stordahl comes by to pick up the boxes and carry them to the Warbelow’s Air Ventures at the East Ramp. A group of seven people gathers in the waiting room, chitchatting through the snowy morning.

“It’s 8 o’clock departure, but we do know that the plane today is probably delayed because of the weather,” Stordahl explains. “They say it’s improving quickly but it’s still not great visibility, and Chalkyitsik has no lights so they have to have sunlight.”

The delay might take 30 minutes, but you can never be sure, Stordahl said. “Hopefully, nature will work itself out.”

For the most part, TCC has been lucky with the weather, said Kimberly Sonderland, an instructor for community health aides who has been going to vaccinate villages non-stop since early January. “Now that we have more sun, we often fly when the sun is rising and are getting back before the sunset. There was one day where there was this beautiful sun dog looking at us the entire day.”

Cold weather in the Interior complicated a couple of flights, but most of them went as TCC planned. They flew to their first village, Galena, on Dec. 21, just sending one plane a day at first and then gradually building up their ability to send up to three planes — and three teams.

“It took us a while to build enough team members to be able to send more planes,” Stordahl said. “The first trips were a lot of learning in terms of things to do and things not to do.”

Now Stordahl makes sure that on every flight there is a person experienced in COVID-19 vaccination trips and knows the workflow. She also thinks about how many people to put on a plane depending on the need and on how far the plane is going, “because all that weight and balance stuff matters.”

“If I’m going to ask them to go further, then I probably would put fewer team members on the plane because they need more fuel, but it’s different if there is a place that has a fuel stop. In my brain, if I have seven seats on a plane, I can put seven people on it, but that’s not the case,” she explains. There are a lot of moving pieces,” she said, “And there is wind and snow and cold and whatever.”

When the plane lands in a village, it doesn’t necessarily mean the travel has ended. Some vaccination sites are three to four miles away from village airports.

“You never know if you are going to be riding in a vehicle, but you have to be prepared,” Donat said. “You could be on a snowmachine or a sled behind a snowmachine.”

Most of the vaccinations happen in village clinics but some of the clinics are too small for social distancing, so the team moves to community halls, tribal halls, churches and schools. Sometimes they also deliver the vaccine to people’s homes.

Last Friday in Ruby, one of the elders couldn’t make it to the vaccination site because her road wasn’t plowed, “so some folks went out on a snowmachine to deliver the vaccine to her in her home,” Sonderland said. “And she would not be in the position to go on a snowmachine herself to where we needed her to go.”

Taking the necessary spontaneity into account, for the most part, the TCC team follows their process.

“You need to know how many vaccines you are taking so you are not wasting vaccine, and you want to make sure you know what time your patients are coming,” Stordahl said. While flu mass vaccine clinics can be open for the public, COVID-19 vaccinations require avoiding crowds and managing the flow. “You kind of have to have a plan — a workflow.”

The moods in the villages

To find their patients, TCC uses their health care records, as well as local organizations and word of mouth. But for the most part, the patients are well aware they are coming and are eager to get vaccinated.

“Everybody is pretty excited about the vaccines,” said Donat who has been working in villages for over 18 years and knows a lot of people there. “The people really show up — there is not a lot of no-shows. They are all eager to get it and be able to kind of get on with their lives.”

In the past year in Interior villages, life has been on hold.

“Even though we are all in Alaska, life has been different in the villages than it has been in urban areas,” Stordahl said. She explained that in cities, everybody went into a big lockdown for a couple of months, scared to go to the grocery store or the gas pump. Eventually, people started going back to do those things. Meanwhile, in the villages, residents really tried keeping the virus out, so they “really, really locked down travel. Their life has been different than ours.”

Because life in the villages has been altered so much, it created a higher acceptance rate of the vaccine than in urban areas and there are no difficulties in getting appointments filled, Stordahl said.

That acceptance rate is also apparent from the appreciation people show.

“In one of the villages, it was just been really great — the school children made this card for us, saying ‘Thank you for keeping us safe,’” Sonderland said. “It is funny because children are not even able to get the shots themselves, but it was for keeping their families safe.”