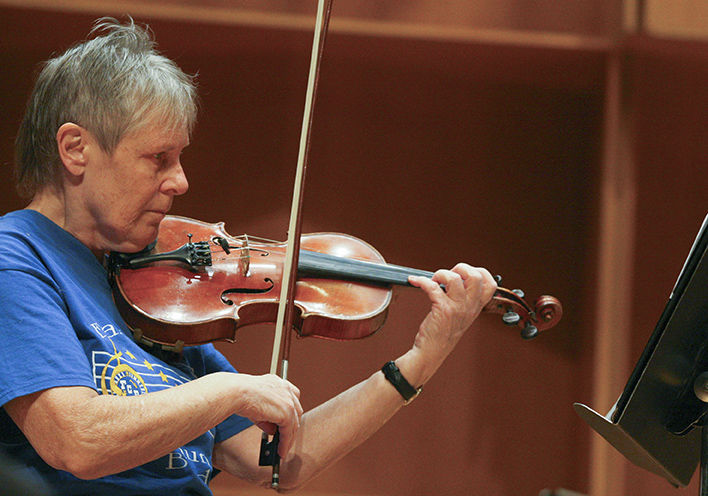 Eve D'Angremond warms up on the violin before practice with the Fairbanks Symphony Orchestra at the University of Alaska Fairbanks Davis Concert Hall on Friday, October 3, 2014. 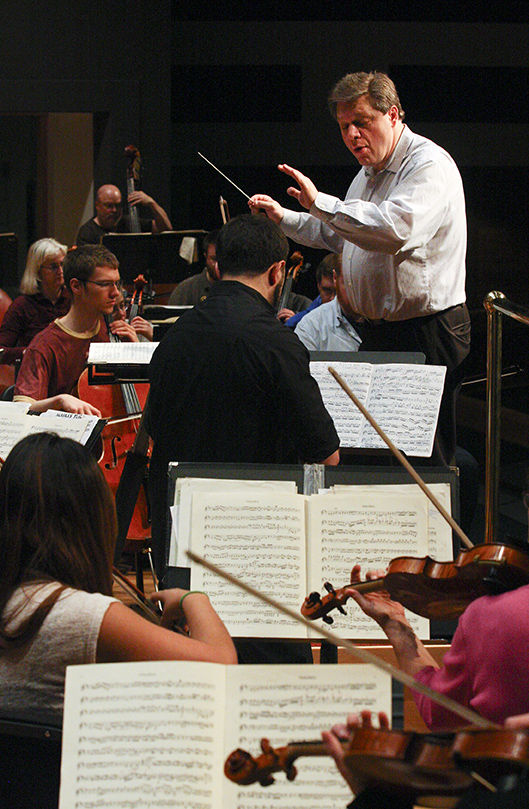 Eduard Zilberkant conducts the Fairbanks Symphony Orchestra during their practice in the University of Alaska Fairbanks Davis Concert Hall on Friday, October 3, 2014. 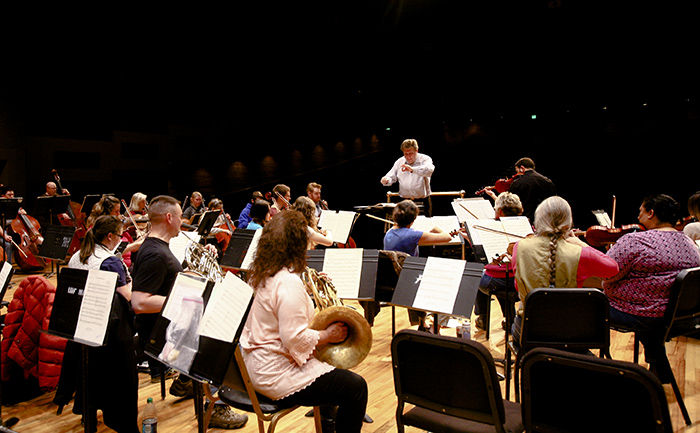 Eve D'Angremond warms up on the violin before practice with the Fairbanks Symphony Orchestra at the University of Alaska Fairbanks Davis Concert Hall on Friday, October 3, 2014.

Eduard Zilberkant conducts the Fairbanks Symphony Orchestra during their practice in the University of Alaska Fairbanks Davis Concert Hall on Friday, October 3, 2014.

FAIRBANKS — After most big season openers, a performing group usually catches a break in rehearsal for the next few days or weeks. Not so much with the Fairbanks Symphony Orchestra.

After today’s season opening performance at Davis Concert Hall, symphony members go back into rehearsal for a few days before packing their cellos, violins, oboes and flutes, and hopping on a plane Thursday to fly almost two days to South Korea for an acclaimed international music festival. There, the all-volunteer professional orchestra will act as the house orchestra for the Gumi International Music Festival in Gumi, South Korea, an acclaimed festival known on the worldwide musical stage.

“To be invited is quite a high honor. Eduard was part of the festival last year, and the programming body over there invited his orchestra this year. We’re kind of hanging on to the coattails of our conductor,” Laura Bergh, the orchestra’s executive director, said of music director and symphony conductor Eduard Zilberkant. “We’re kind of the orchestra in residence, and we will be accompanying some of the soloists participating in the festival as well as giving our concert and performing a children’s concert. It’s a wonderful musical opportunity to get to go and see this country and perform.”

Zilberkant was enthusiastic in talking about the festival, calling it “ ... a very major festival with some of the best artists in the world coming there.”

“It’s incredible international acclaim,” Zilberkant said as he listed international soloists and performers from Asia and Europe with whom the symphony would be performing.

One of the pieces Zilberkant pushed for was performing “Carnival of the Animals” in the children’s concert, which will be attended by up to 2,000 South Korean students. The concert is in honor of the Sewol ferry disaster that occurred on April 16 in which 304 people died when a ferry sank while carrying students from Danwon High School in Ansan, South Korea, on a field trip. As many of 250 of those who died were students. Other performances during the stay include performing the festival’s opening concert, backing soloists during the festival, and performing the festival’s finale with several choral groups from Korea.

“It’s a busy schedule,” Zilberkant said. “It’s a very packed event but it’s extremely prestigious. It’s world renowned. It’s something orchestras over the world would love to do.”

International travel is not a new thing for the Fairbanks Symphony Orchestra.

In 2008, the symphony traveled to Greece to play festivals in Corfu and Samos, and it traveled to Spain in 1989 by invitation of a concert organization there. In 1987, the group toured mainland China, and in 1985 toured Scandanavia.

“It is quite a challenge to get nearly 70 musicians to a foreign country but despite the headaches it really is a great chance for our symphony,” Bergh, the executive director, said. “Music is an international language. Everyone speaks it.”