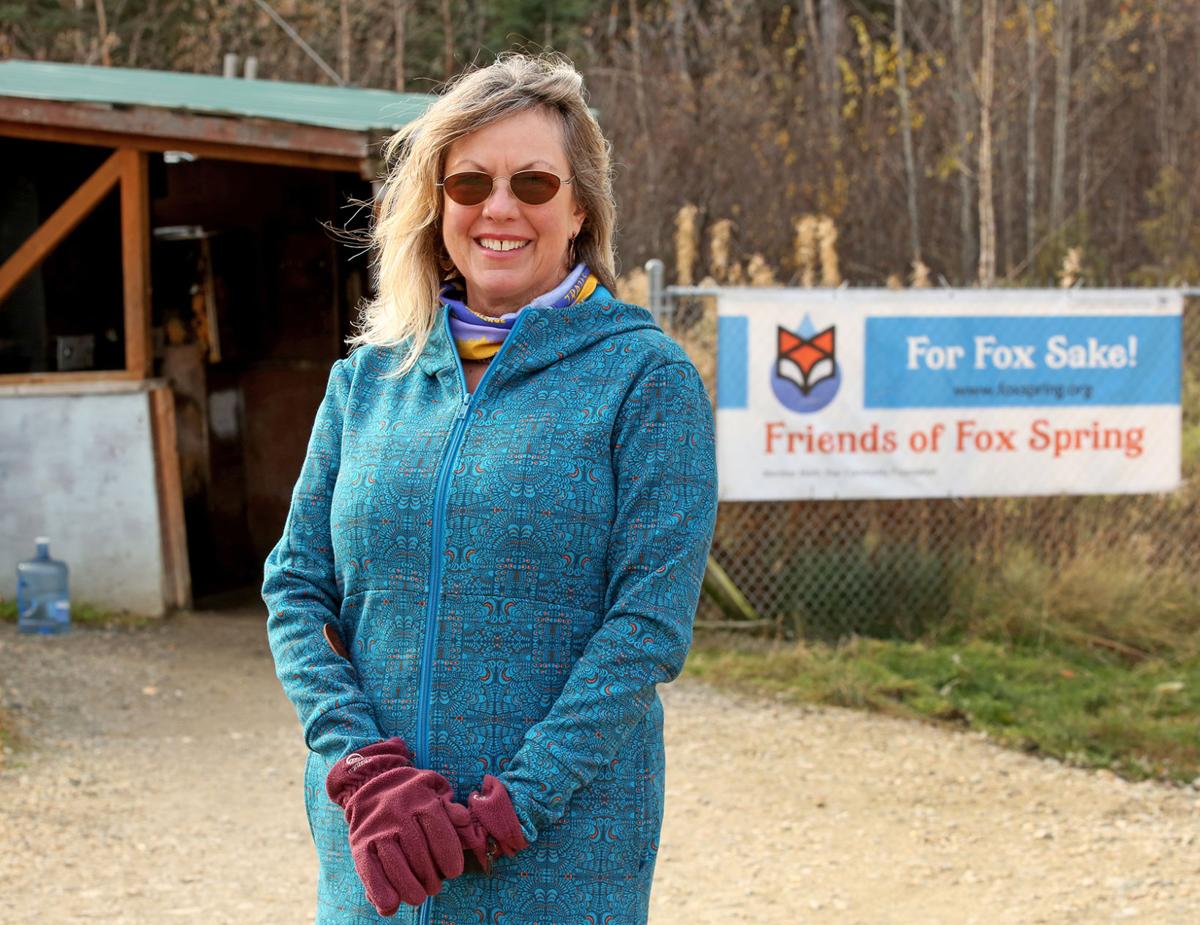 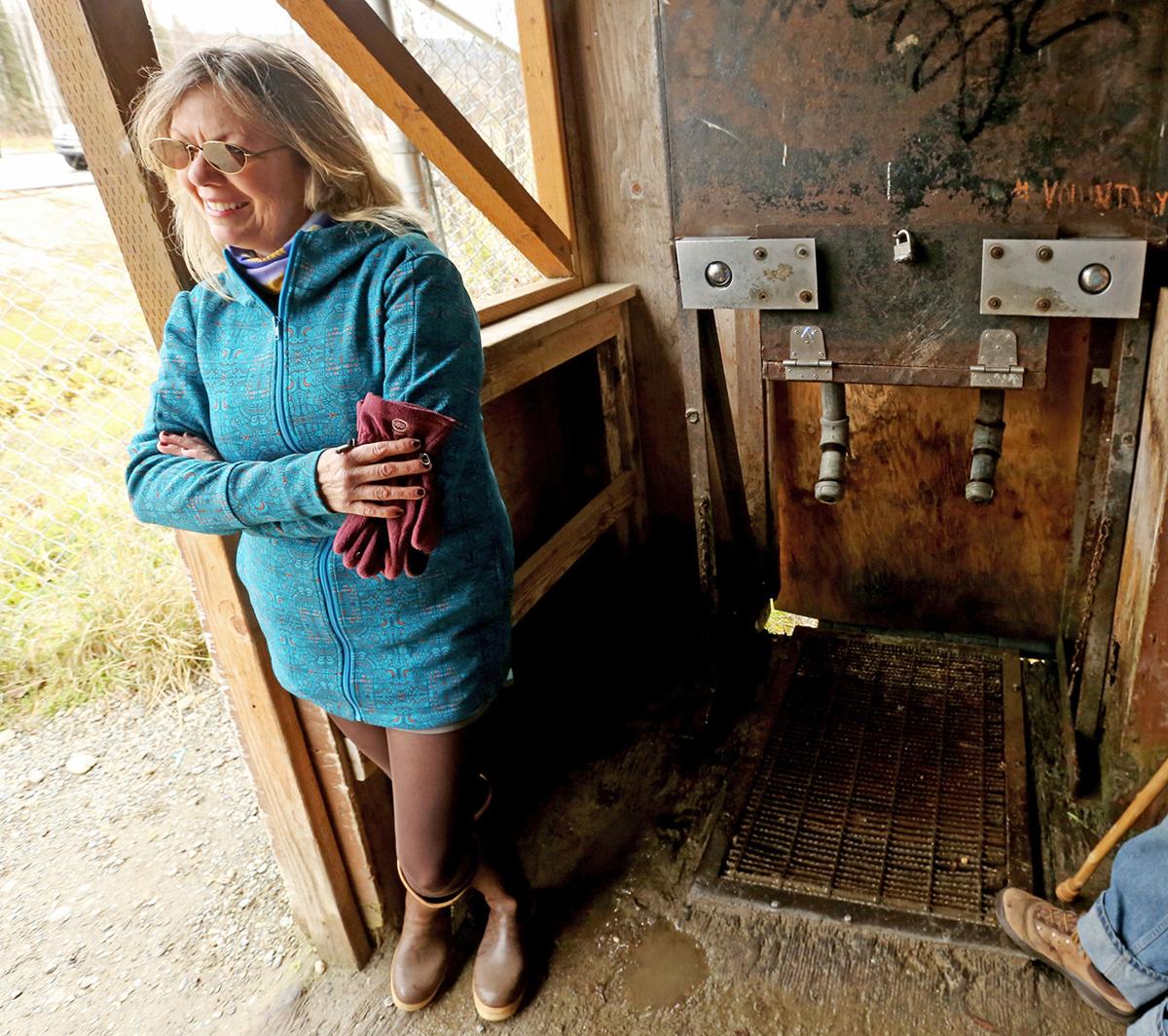 On Tuesday afternoon, over the course of an hour, over a dozen individuals stopped by Fox Spring with jugs, water bottles and, in the case of one man, a repurposed glass liquor bottle, to collect fresh drinking water free of charge.

“This place has been important to a lot of people for a long time,” Melinda Harris said. “For some people, this is their nearest water source.”

Harris is the board president of the nonprofit Friends of Fox Spring, which is a member of the North Star Community Foundation. The spring, 2331 Elliott Highway, provides water to roughly 2,000 residents, free of charge, year-round.

The state of Alaska is the owner of the property on which Fox Spring sits and has operated the spring since 1966. While the spring is still state-maintained, the funding for maintenance is provided by Friends of Fox Spring, via a memorandum of agreement.

Harris explained that the group came about in 2016, after budget concerns prompted the state to announce its intention to stop funding maintenance of the spring.

“At the time, the operation of the spring was becoming something of a public urgency. There had been petitions signed and public meetings and all these kinds of activities,” she said “But there was not yet some kind of solution to the fact that the state had proposed it would divest itself of this property.”

The result of these meetings was the forming of Friends of Fox Spring, which dedicates itself to preserving public access to the well. The group fundraises roughly $40,000 annually, which is what is required to reimburse the state for maintenance expenses.

Harris said that one of the people who attended the meetings at the time was Owen Guthrie, who had a connection with the North Star Community Foundation. In March 2017, the foundation became Friends of Fox Spring’s fiscal sponsor. Harris said that was “crucial” and explained that the foundation supervises the nonprofit’s financial activities, handling things such as tax filing for the group.

These days, Harris’ role as board president is operating Friends of Fox Spring’s social media account, promoting and advocating for the spring, and coordinating fundraising activities.

“We, as an organization, don’t pay for anything — we reimburse the state’s expense,” she said. “The state, for example, has a contract with Golden Valley (Electric Association) for electricity and a contract with Pollen Environmental. Pollen does the water testing here — there’s required water-testing every month.”

When repairs are needed, the state sends a staffer to take care of it. Most importantly, Harris said, the state employs a certified water-well operator within the Department of Transportation.

“With all of this stuff, we’ve had a little bit of a voice as an organization,” Harris said. “Currently what we’re encouraging DOT to consider doing is to create a plan to rebuild the shack itself. Not so it’s an extravagant structure, but it’s become apparent that it’s wearing out.”

Harris said that one of the group’s main fundraising activities is organizing volunteers to spend days at the spring, greeting users and accepting donations from regular users to contribute toward its maintenance. Friends of Fox Spring member Ralph Snodgrass is among those who volunteer regularly. Snodgrass said, over the summer, he counted “easily over 400 vehicles” stopping by Fox Spring.

“I’ve been with this group from square one. I was at the first meeting and I’ve been at every meeting since,” Snodgrass said. “I’ve been using this spring since 2005/2006.”

Harris said that the group engages in various fundraising activities and has been supported by a number of local firms. A sign currently hanging at the spring, which Harris said was paid for by Spirit of Alaska Federal Credit Union for the group’s summer 2018 campaign, cheekily reads “For Fox Sake!”

“We’ve had some very generous donations from certain individuals,” she said. “Kinross (Fort Knox), the gold mine, donated $10,000 to us last fall. That’s our largest single donation to date.”

Born and raised in Southern California, Harris moved to Arizona in the mid-’80s, before relocating to Juneau in the spring in 1994. She had completed a degree in fine arts at the University of New Mexico, which involved a class in “drawing and camping.” She said there’s always been some outdoors component to her life.

“I was prompted to move here, because my sister and her husband had moved to Alaska the year before and they were loving it,” she said. “And I’d come up for a visit and I thought it was pretty neat.”

During that same year, she came to Fairbanks for the first time to help a friend with the logistics of a solo Yukon River trip. In 1999, she moved to Fairbanks for a year to study aviation maintenance at what used to be called the Hutchison Career Center.

“I got interested in aviation after I moved to Juneau, so I got my mechanics certificate up in Fairbanks and then I was back in Juneau for a couple of years,” she said. “That’s not my vocation currently, but I still keep my credentials as far as the FAA goes and I’ve worked in a number of different capacities in that field.”

Harris relocated to Fairbanks permanently in 2001, moving into a dry cabin in Ester, which she says necessitated finding a water source. This was how she was introduced to Fox Spring.

“It doesn’t take long before somebody informs you that this place is here,” she said. “Of course, it probably looked a little different than this back then, but not by much.”

Harris said that Fox Spring quickly became a favorite spot, even after the necessity disappeared.

“This the kind of spot that, on a whim, you might decide to get spring water — even if you had town water or even if you had a well at home. I still connected with this place from time to time,” she said.

Harris explained that it no longer is a natural spring but is water drawn from a relatively shallow well — less than 30 feet down. She said it comes from a “good-tasting aquifer,” and has been providing water since long before 1966.

“Possibly back to the earliest homestead on this property, which is 1924,” she said, “and possibly even before then.”

Snodgrass said the lore is that a hunter was traveling the Elliott Highway and spotted a fox from horse and buggy. He took a shot at the fox, and, when he went to check whether he’d gotten it, the hunter found water coming out of the ground.

“There’s no documentation of that, but I’ve heard that,” he said.

These days, the focus is on keeping the spring open and free to the public for years to come. Harris has confidence in Friends of Fox Spring’s fundraising efforts, but said ultimately she hopes that the state steps back in.

“The ideal scenario would be for the state to say, ‘This doesn’t really make a big deal for our budget so we’ll just take it back,’ and we would be happy to continue to fundraise for improvements, such as the shack,” she said.

“That would be my hope.”

Correction: An earlier version of this article contained a misspelling of Kinross Fort Knox gold mine.