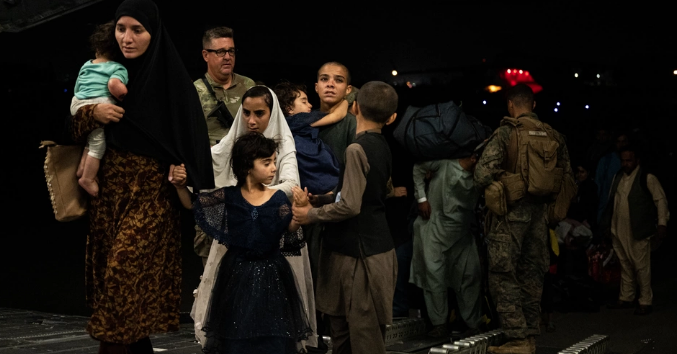 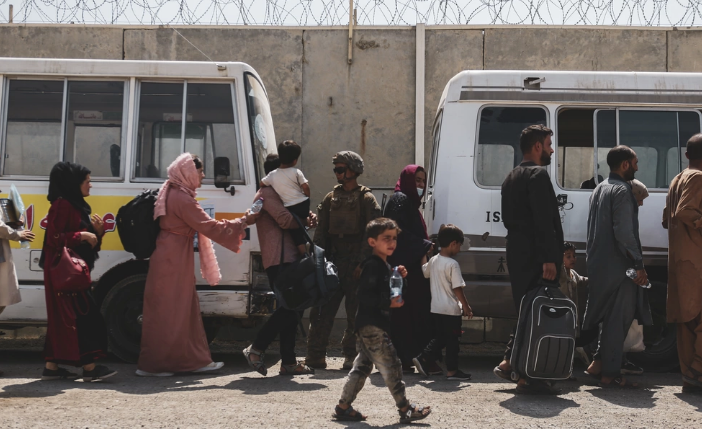 Evacuees board buses on Aug. 22 to be processed during the evacuation at Hamid Karzai International Airport. U.S. Marine Corps photo by Sgt. Isaiah Campbell. 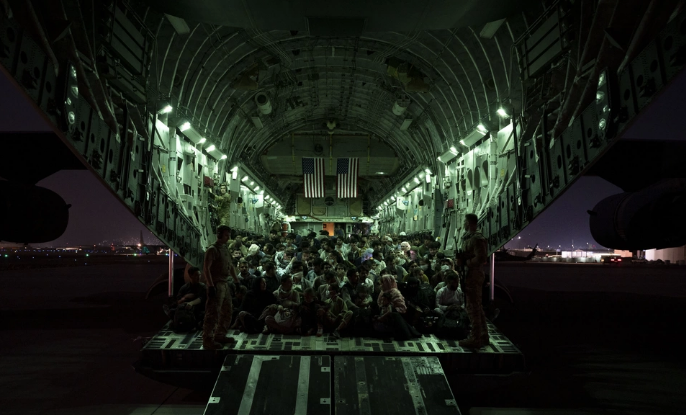 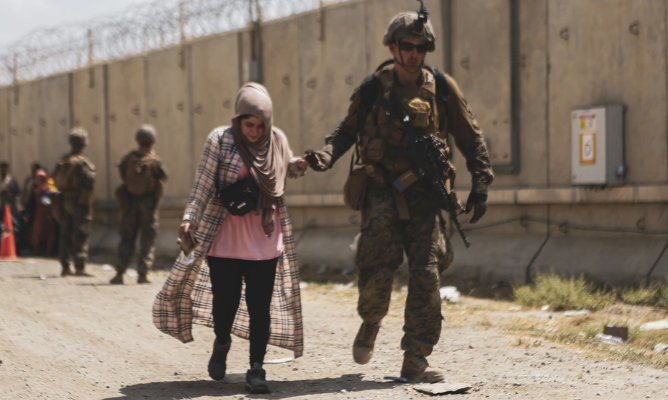 A Marine assists a woman on Aug. 22 during the evacuation at Hamid Karzai International Airport. U.S. Marine Corps photo by Sgt. Isaiah Campbell.

Evacuees board buses on Aug. 22 to be processed during the evacuation at Hamid Karzai International Airport. U.S. Marine Corps photo by Sgt. Isaiah Campbell.

A Marine assists a woman on Aug. 22 during the evacuation at Hamid Karzai International Airport. U.S. Marine Corps photo by Sgt. Isaiah Campbell.

Sen. Dan Sullivan urged President Biden to give troops time and support to complete safe evacuations from Afghanistan, even if they go beyond the administration’s self-imposed deadline for withdrawal.

“The Taliban cannot be allowed to dictate whether and how we save, protect, and keep faith with our own citizens,” said Sullivan, a U.S. Marine colonel. “To do otherwise will cause an irrevocable breaking of faith and trust with the American people.”

But time is running out. Biden set a deadline of Aug. 31 for U.S. troops to leave, as America officially exits Afghanistan after a 20-year war.

The United States and western allies evacuated about 6,800 people from Kabul Friday and Saturday, as the Taliban continued to take control of the government and close the nation’s borders.

Several hundred Americans and thousands of Afghans are still trying to get out, the Pentagon reported.

A suicide bomber attacked crowds near the Kabul airport Thursday, as U.S. military airlifts were underway. The blast killed 13 U.S. troops. At least 18 other troops were injured. More than 90 Afghan citizens died, with precise figures unavailable.

The Islamic State claimed responsibility for the blast that killed 11 Marines and one Navy medic. Another service member died hours later.

“It is devastating to see that American troops were targeted, injured, and killed while protecting the airport,” Murkowski said. “It is important to remember that their mission has not been in vain as thousands of Americans and tens of thousands of allies and vulnerable Afghans have been safely evacuated.”

Murkowski’s office said it continues to field requests from constituents seeking evacuation help for relatives, loved ones and colleagues inside the country.

As the U.S. and NATO allies scaled back evacuations this weekend, thousands of Afghan professionals who supported the U.S. military presence, including interpreters and embassy personnel, were still trying to get out.

The State Department was reporting new “credible threats” near the airport.

Murkowski released a statement Saturday after the U.S launched an airstrike against ISIS-K, the Islamic state affiliate that claimed responsibility for the suicide bombing.

“America is taking direct and necessary action to retaliate against ISIS-K’s ruthless attack and sending a clear message that we will not tolerate the targeting and killing of Americans and innocent Afghans,” Murkowski said.

“I have made clear that I believe the withdrawal of troops from Afghanistan was hasty and poorly planned, and stand ready to fully investigate the disastrous failure of this administration’s planning and execution of the evacuation,” she said.

‘Eyes of the world are now on us’

Young called the loss of U.S. service members heartbreaking. “These brave heroes laid down their lives defending some of the most vulnerable,” Young said.

“After two decades, we had a moral responsibility to exit in a way that honored the dead and set a free Afghanistan up for success,” Young said. “The eyes of the world are now on us.”

President Joe Biden, in an emotional speech to the nation, mourned the loss and vowed to strike back. “We will not forgive. We will not forget. We will hunt you down and make you pay,” Biden said.

But Sullivan, who has served in the Marine Corps since 1993, both in active duty and the reserves, offered a harsh assessment of the president’s actions. Sullivan underscored the need for the administration to support the military for a safe evacuation and exit.

“As I’ve repeatedly stated, in spite of the horribly-executed withdrawal plan and the recent violent developments, the members of our military must be given the time and the resources to complete their dangerous and noble mission: safely evacuating every American citizen in Afghanistan who wants to leave,” Sullivan said.

“If this means going beyond the unwise, self-imposed deadline of August 31 to bring every American home, so be it,” Sullivan said. “To do otherwise will cause an irrevocable breaking of faith and trust with the American people.”