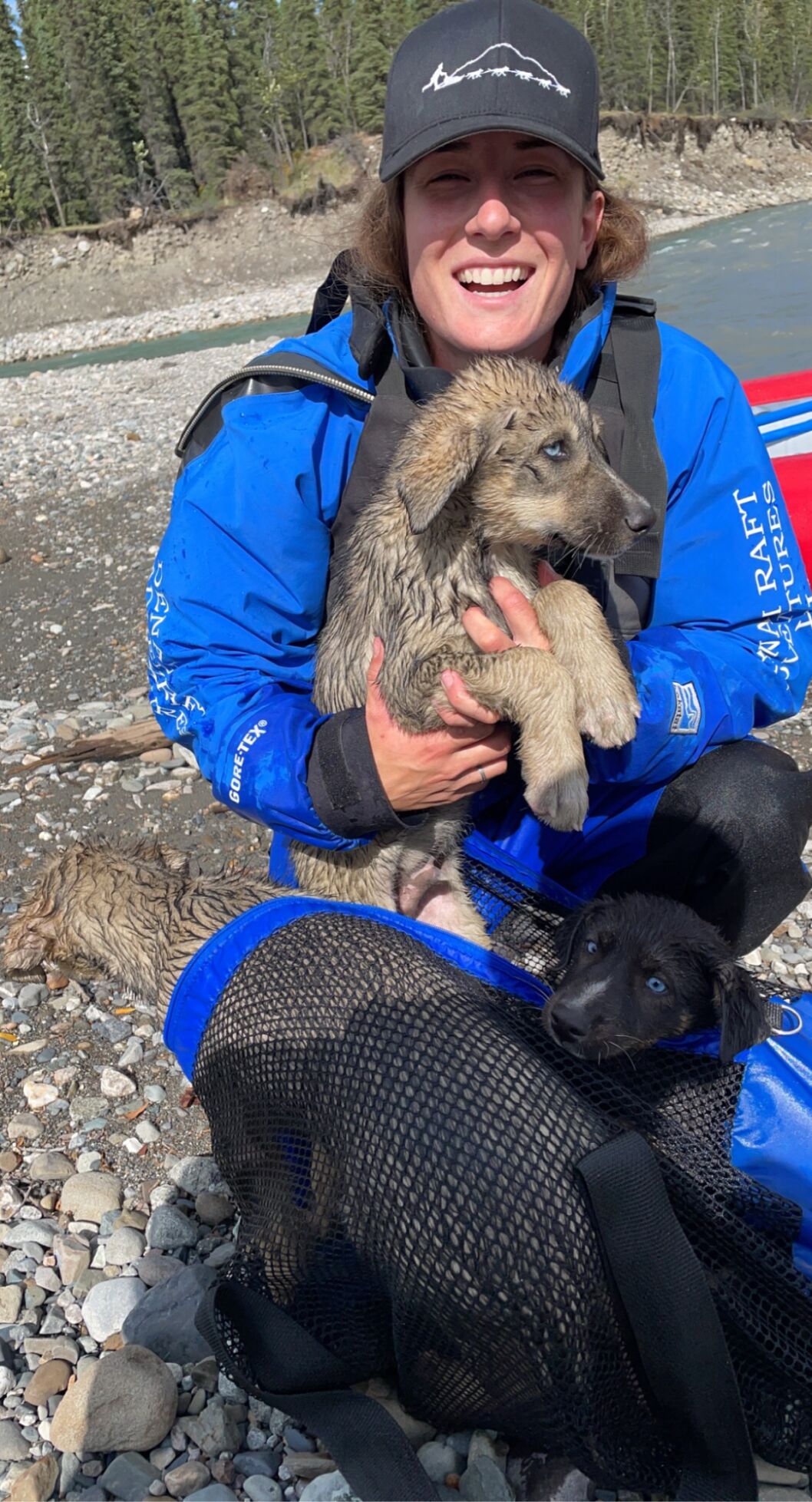 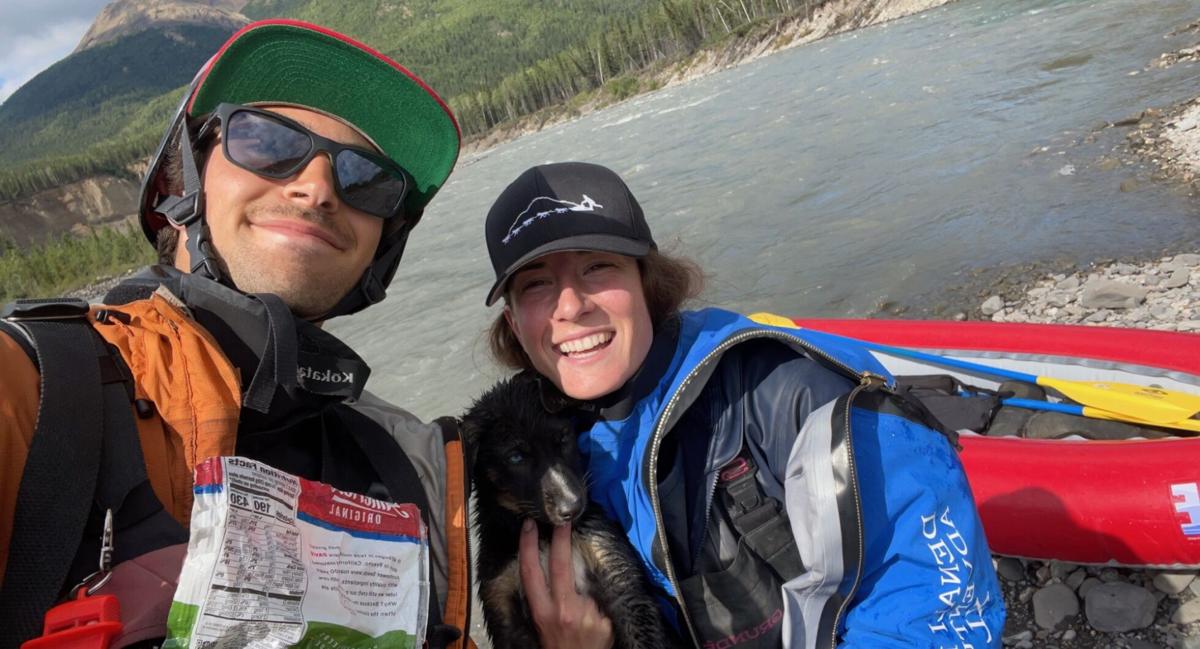 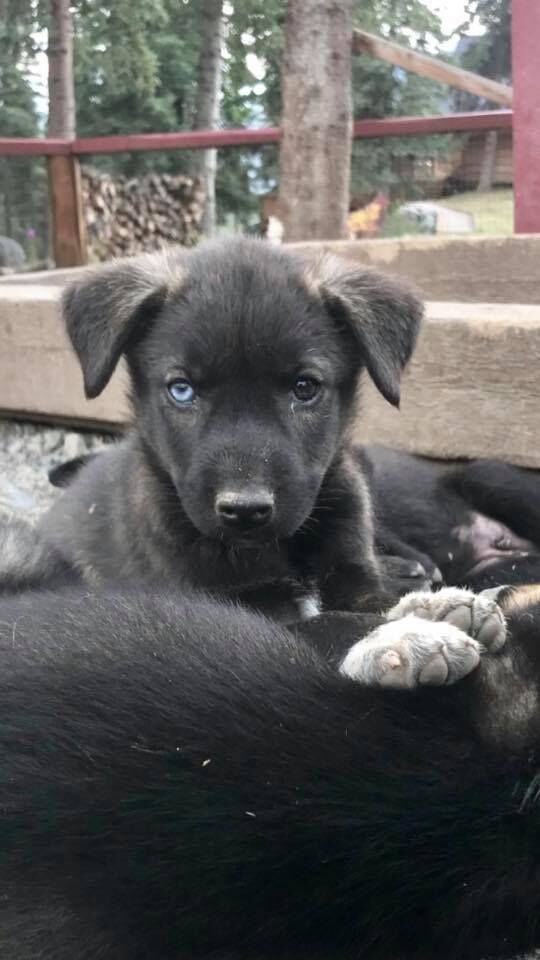 The search continues for Wicked, who is still missing. This photo was taken when Wicked was 7 weeks old. Wicked is about 12 weeks old now. Photo courtesy Amanda Otto.

The search continues for Wicked, who is still missing. This photo was taken when Wicked was 7 weeks old. Wicked is about 12 weeks old now. Photo courtesy Amanda Otto.

A Denali Raft Adventures guide recently rescued three 11-week-old puppies found stranded on the shore of the Nenana River after they wandered off from their home.

“We want to change their names to Lewis and Clark,” Iditarod Champion Jeff King said of two of the recovered puppies.

The puppies were out for a walk earlier in the week, when four of them disappeared over a berm and could not be found. Three days later, Denali Raft Adventures guide Demetrios Raisis was just beginning his 7:30 a.m. raft trip, leaving from Denali Park Village.

“About 10 minutes into it, we’re coming by this really high cliff called the Neapolitan Wall,” he said. “The kid in front of the raft, who had been quiet all day, said, ‘Look! Puppies!’”

Raisis said he has seen calf moose in that spot, but puppies? That was a surprise. But there they were. Two puppies, half a foot away from the water, up on the rocks, cuddling each other, he said.

Because of the current, it was too late to paddle over and stop to retrieve them.

“They were in a pretty precarious spot on the river,” he said. “There was really no way I could have pulled over on shore and got to them. I would have had to climb up a 10-foot rock wall.”

So he finished the trip but then made plans to go back and rescue the puppies.

Sometimes he sees baby moose in that spot. They stumble over the cliff and end up stuck on the river’s edge. But moose calves usually try to escape by swimming in the river.

“I didn’t want that to happen to those puppies,” Raisis said.

He notified Husky Homestead and handler Amanda Otto joined him for the rescue trip in an inflatable canoe.

“We both started paddling down the river,” Raisis said. “It took us 10 minutes to get around the first bend. On the second corner, Amanda spotted a puppy.”

This puppy was further upriver and separated from where the other two were sighted. The two other puppies were then also spotted and retrieved.

It was not possible to hike out from there, so the puppies had to ride in the raft. Raisis brought along a mesh bag, figuring it was the best way to keep the puppies contained on the watercraft.

“They could squirm around but wouldn’t be able to get out of the raft,” he said. “It was safer and faster to continue rafting down the extra hour and 15 minutes to Riley Creek with three puppies in a bag.”

At Riley Creek, the two rescuers freed the puppies from the mesh bag and arranged for pickup on the Parks Highway. One puppy appeared to have a hurt leg, but otherwise they seemed to be in good health, Raisis said.

When rescued late last week, the puppies had been missing for three days and had probably wandered at last four miles, and maybe up to six miles, if you take elevation gains into account.

The smallest, Wicked, is still missing. That puppy also apparently had a knack for hiding, Raisis said. Local residents have diverted all their daily walks to that area this week, searching for Wicked. One resident even paddled a pack raft along the shoreline, in case Wicked got swept further downstream.

“I’m blown away and very grateful to the community for all their efforts in the search,” Amanda Otto said. “I’ve been out bushwhacking every day in the area we found the three since. As they say, it takes a village.”

The search for Wicked continues.

The former Mountain View convenience and liquor store will be for sale soon, according to Justin Charon of Vitus Energy.

“We ended up with the property as part of acquiring their liquor license (which has been going on for a year), “ he said. “We are cleaning up the property and will put it up for sale.”

Vitus Energy is an Alaska owned fuel distribution company with operations in both Cantwell and Healy, including gas stations, convenience stores and home fuel deliveries.