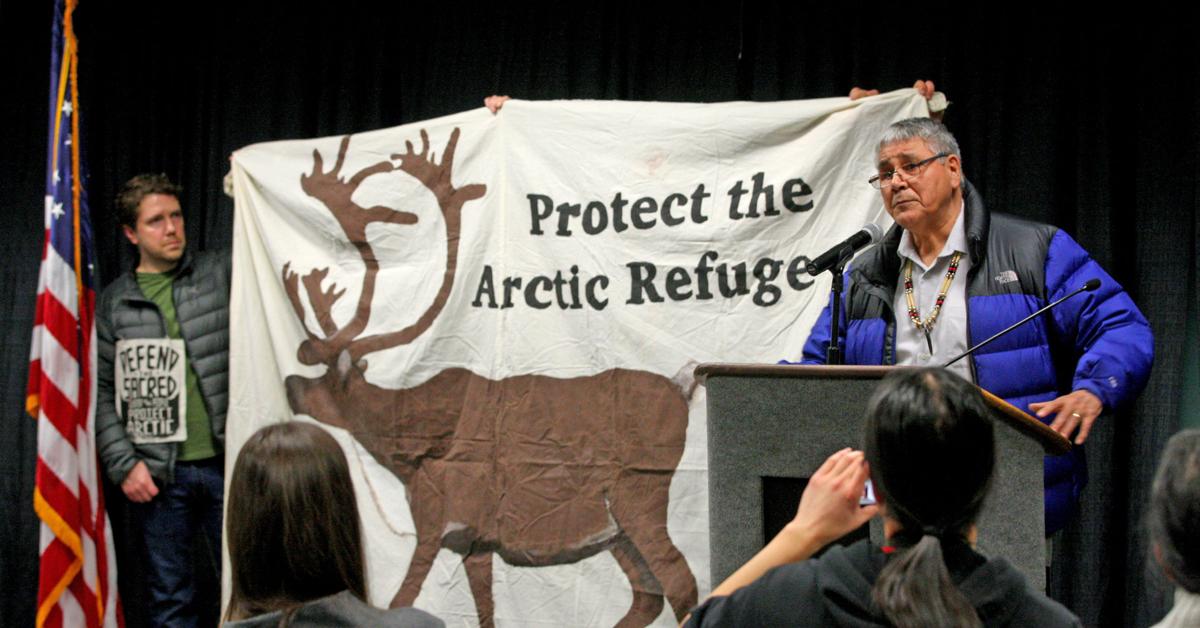 FAIRBANKS — Activists pushing against oil development in the 1002 Coastal Plain area of the Arctic National Wildlife Refuge took over a public scoping meeting Monday evening that was initially supposed to go very differently.

Unlike past public hearings, this meeting was organized in an open-house style, according to Joe Balash, the Department of the Interior’s assistant secretary for Land and Minerals Management. Scientists stood near poster signage explaining the environmental impact statement draft process and two court stenographers sat behind a curtain to take testimony from members of the public.

Balash said the meeting was organized this way in an effort to help things run smoothly.

“In other parts of the department, we’ve utilized this open house format for public meetings like this and have found it to be fairly effective as far as providing information to people,” Balash said. “This is really an opportunity for people to get information, and let that information inform their comments.”

Jody Potts, a Fairbanks woman and head of the Village Public Officer Program for the Tanana Chiefs Conference, spoke out against the organization of the meeting, noting the need for public testimony to be able to be heard by the public while also being recorded.

“My people, the Gwich’in, will be the most affected by this,” Potts said. “And our government that is supposed to represent all of us equally and freely is preventing us from properly commenting, and I think that needs to be justified.”

One of the stenographers was eventually brought to the front room to take down testimony, but those giving testimony were told to speak slowly and in English.

Samuel Johns, an Athabascan man originally from Copper Center who now lives in Anchorage, brought up the disparity of Native Alaskans versus non-Natives who are involved in the EIS process and leasing proposals.

“You said you will be going to the villages, but there is a problem with that. Look at the ratio of non-Natives who are going with you,” Johns said to Balash. “It’s very disrespectful to just bring a group of non-Natives into a community and tell us how you’re going to handle our land.”

Balash argued that the tribal government for the village of Venetie was consulted on the EIS process.

“If you had paid attention to the slideshow, you would have seen that they were at the table,” Balash told Johns.

This response was met with boos from the crowd.

The issue of the language divide was brought up by Adrienne Blatchford, an Inupiaq woman originally from Unalakleet who now lives in Fairbanks.

Other points of contention revolved around the seemingly last minute scheduling of the meetings, giving members of the public only five days between the schedule release on Jan. 30 and the Fairbanks meeting on Feb. 4, as well as subsistence concerns and climate change.

“You’re talking about the Gwich’in people but leaving out the rest of the world. Because what happens in the Arctic affects the rest of the world and we’re seeing that right now,” Blatchford said. “Our people are hurting right now. The suicide rates are growing, the cancer clusters are growing, the sickness is following this desecration of our sacred places and you’re standing up there saying you’re from Alaska and representing our people? How dare you. You’re not representing us in any way, not with equity or equality.”

When asked about the meeting turned protest, Balash said he felt that the majority of Alaskans still support drilling in the 1002 area of the refuge, but those against are very “passionate.”

“People on this particular topic feel very, very strongly. Public sentiment in Alaska for a long time has been largely in favor of leasing and exploring in the coastal plain and ANWR. But, the people who are opposed are incredibly passionate about it and feel very strongly and I think we’re seeing that here tonight,” Balash said Monday evening.

Balash said he wasn’t sure whether Monday night’s events would change the way future meetings were structured.

“I mean, I’m sure I’ll talk with our team and see if there’s any change to the way we might do the Anchorage meeting, but you know, it’s hard to get it just right,” Balash said. “When we did the scoping meetings, we could only have so many people speak and that frustrated people too. So I’m not sure there’s a perfect answer but we’ll talk it over and see if there’s perhaps another way to structure things.”

The meeting was scheduled to end at 7 p.m. but public testimony continued until approximately 8 p.m. when meeting officials turned off the lights on the crowd and two police officers arrived at the Carlson Center. No arrests were made, according to Fairbanks Police Department spokeswoman Yumi McColloch.

Between 5 p.m. and the end of the meeting, all public testimony given before the crowd was against oil exploration in the Coastal Plain. Previous public scoping meetings have been met with mixed responses, including protests from local environmental and Native groups and support from those in favor of resource development in the state.

The draft EIS was released on Dec. 28, 2018, and public comment will be accepted through March 13.

The public comment period has also been extended through March 13. Public comment can be sent through the following methods:

Other public scoping meetings will be held on Feb. 5 in Kaktovik at Harold Kaveolook School, Feb.6 in Utqiagvik at the Inupiat Heritage Center, Feb. 7 in Fort Yukon at the Fort Yukon Community Center, Feb. 9 in Arctic Village at the Community Hall, Feb. 10 in Venetie at the Village of Venetie Tribal Hall, Feb. 11 in Anchorage at the Dena’ina Convention Center and Feb. 13 in Washington, D. C., at the National Housing Center.

Editor's Note: This story has been updated to reflect the events at the end of the evening.