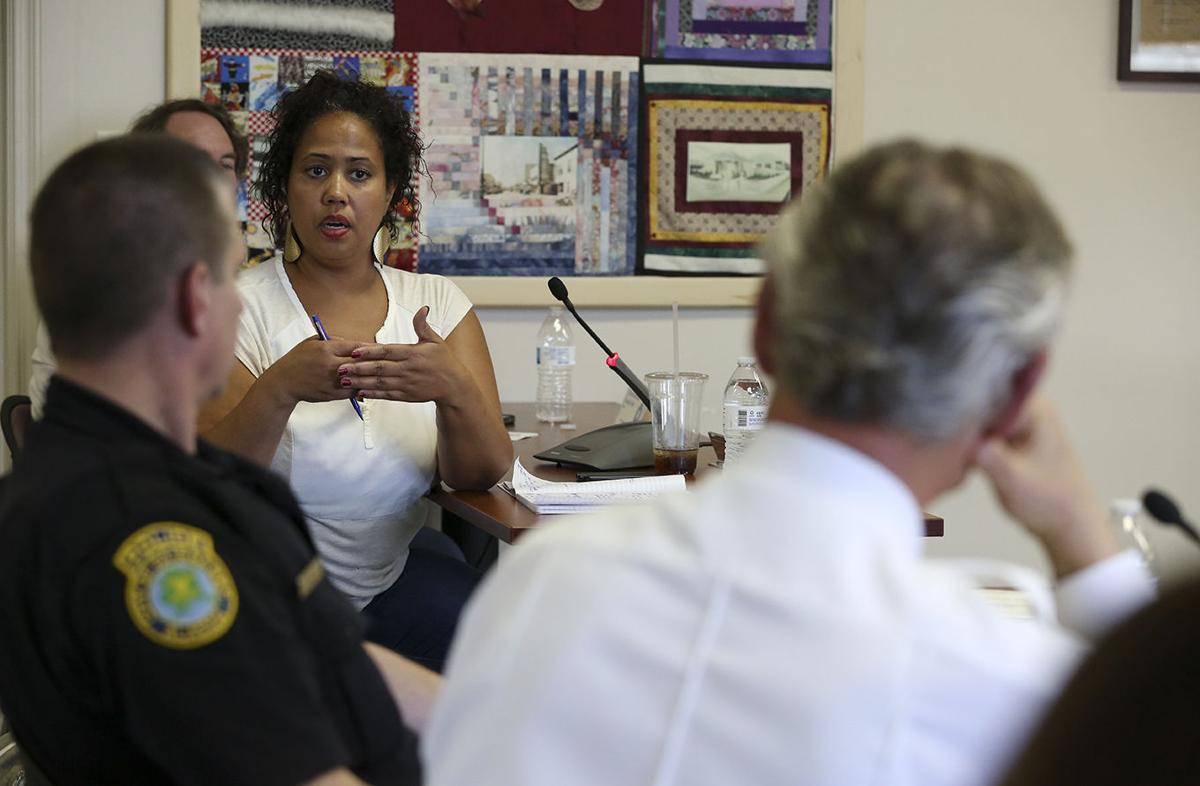 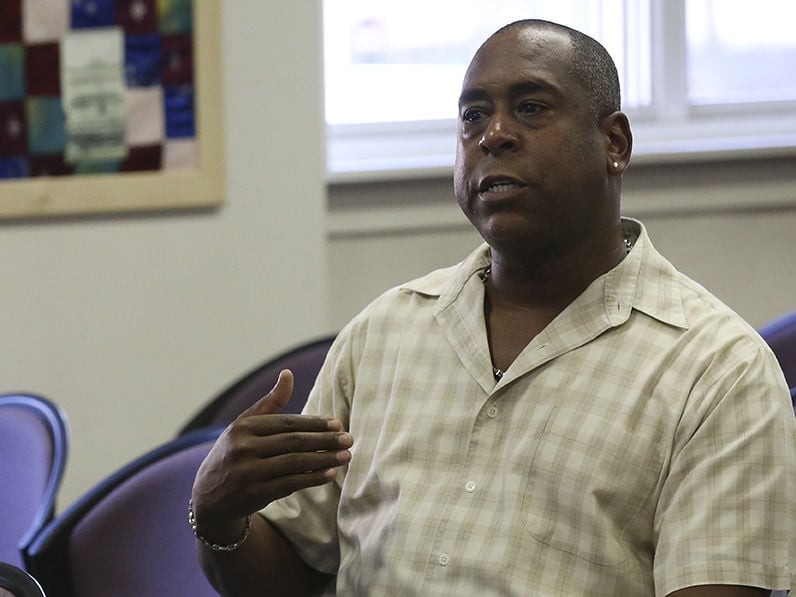 Local NAACP President Bennie Colbert shares his thoughts during a talking circle at the end of the Fairbanks Diversity Council meeting at the Fairbanks City Council Chambers on Tuesday, July 12, 2016. 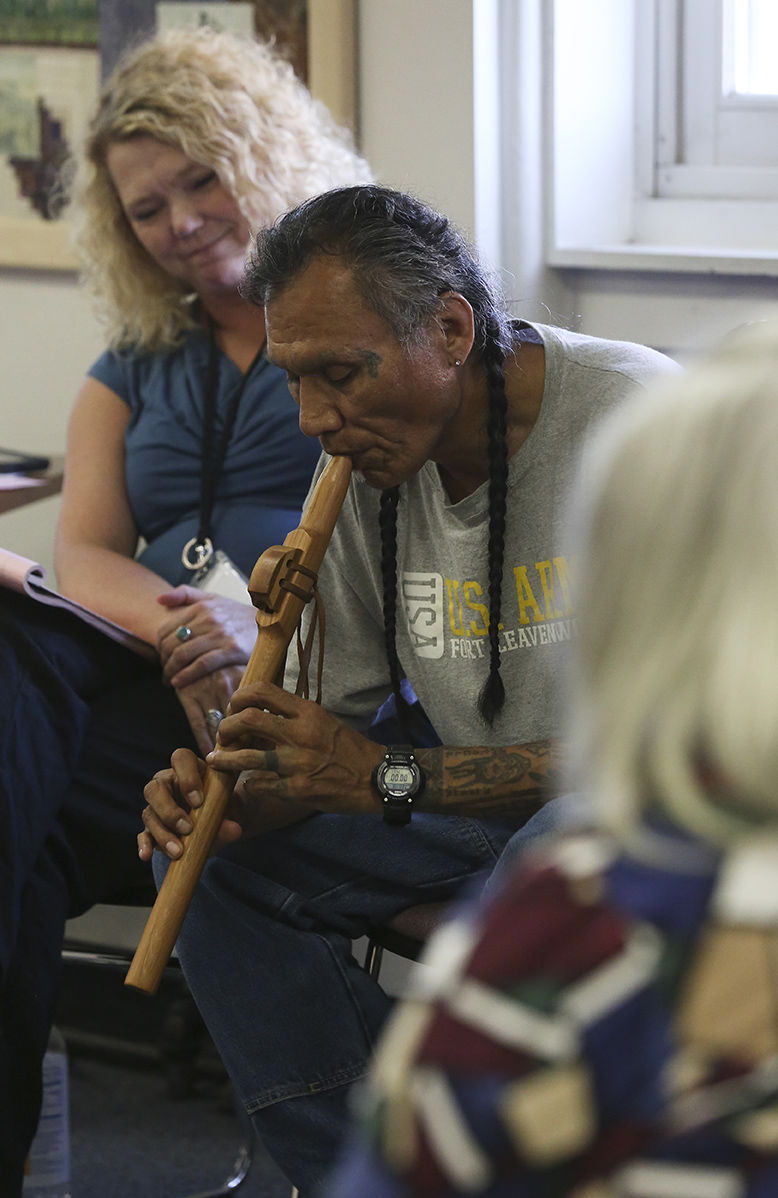 Willard Biederman plays a flute after sharing his thoughts in a talking circle at the end of the Fairbanks Diversity Council meeting at the Fairbanks City Council Chambers on Tuesday, July 12, 2016. 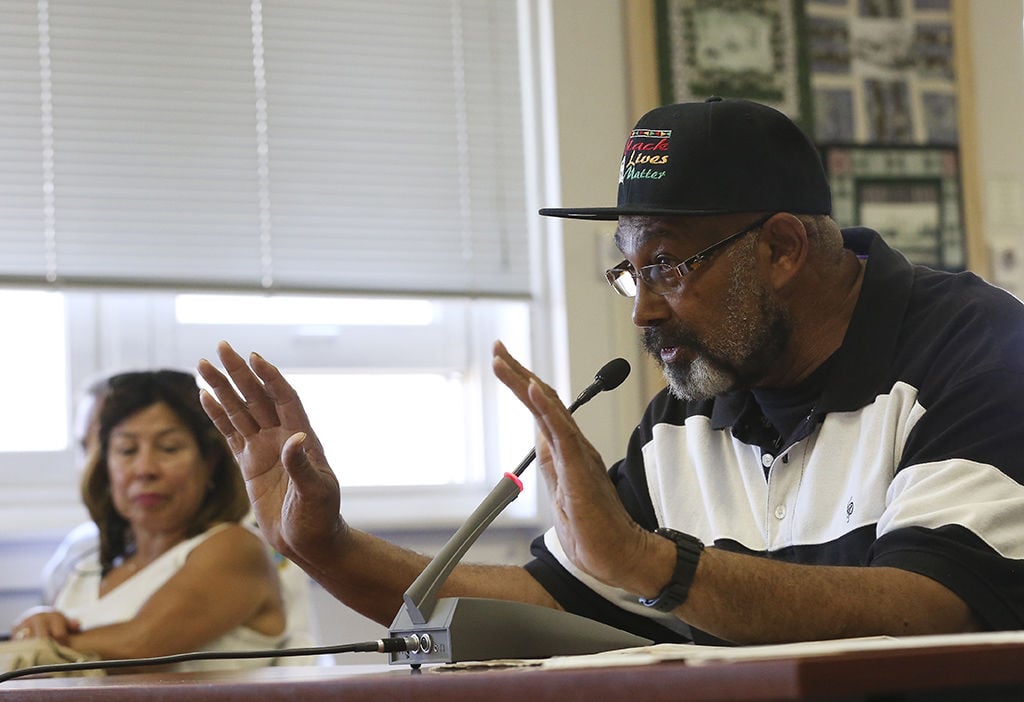 Local NAACP President Bennie Colbert shares his thoughts during a talking circle at the end of the Fairbanks Diversity Council meeting at the Fairbanks City Council Chambers on Tuesday, July 12, 2016.

Willard Biederman plays a flute after sharing his thoughts in a talking circle at the end of the Fairbanks Diversity Council meeting at the Fairbanks City Council Chambers on Tuesday, July 12, 2016.

FAIRBANKS — Racism and the Fairbanks Police Department’s relationship with minorities took center stage at the Fairbanks Diversity Council Meeting on Tuesday night in the City Council chambers at City Hall.

After a lengthy yet productive call to the public, about 25 people formed a talking circle to discuss racism in Fairbanks.

Bennie Colbert, who is president of the Fairbanks chapter of the NAACP, said he wanted to address the elephant in the room — police shootings that kill black men and the police officers who were killed in Dallas — creating racial tension across the nation.

“My heart broke for those five officers. I also grieve for that man (Philando Castile) who was shot in front of his 4-year-old girl and fiancée,” Colbert said. “This is affecting our community. People wonder how can we cope? How can we mourn?”

Colbert believes people in this community have a lot to say about the issue, and there is a gap that must be bridged. He said education is the key to bridging the community.

“I fear that we have people out there who may really start to take sides, and that is not what this nations needs,” Colbert said later.

Trina Bailey, who is on the diversity council, said she is disturbed that it’s easier for people dismiss a person’s life because they are criminal when they’re killed by a law enforcement.

“Somehow because the guy was a criminal it was OK,” Bailey said in reference to the Alton Sterling killing in Louisiana.

One man asked Fairbanks Police Chief Randall Aragon how he could possibly monitor improvements in racism and prejudice, and an eventual eradication of racism within the police department.

Aragon said police officers have come a long way. Police officers are being trained and taking things in through osmosis. The police are also communicating about racial issues now, which is a huge step for the department.

“I don’t know how to score it,” Aragon said. “But it’s going in the right direction and we got a long way to go.”

As people shared their thoughts on racism, Will Biederman passed a set of photos around the circle. The photos were from Vincent Purdue’s funeral. Purdue was shot and killed by police officers during a September 2015 car chase. The most haunting of the photographs showed Purdue in his open casket.

Biederman told everyone he’d been incarcerated in a “glorified tin can” for twenty years of his life. He said learning to forgive, including forgiving the police, has been an important part of healing. He said Native spirituality and music has played a big role in his healing as well.

With a wooden flute in hand Biederman told chief Aragon, “I hope this heals your city.”

Biederman played a heartfelt song on his flute that lasted maybe a minute. There was an applause.

After Biederman’s song, the people continued to share their stories.

The Fairbanks Diversity Council was created to provide a citizen’s forum on diversity issues and to provide the city council and city staff with advice and recommendations for creating equal opportunities throughout Fairbanks.