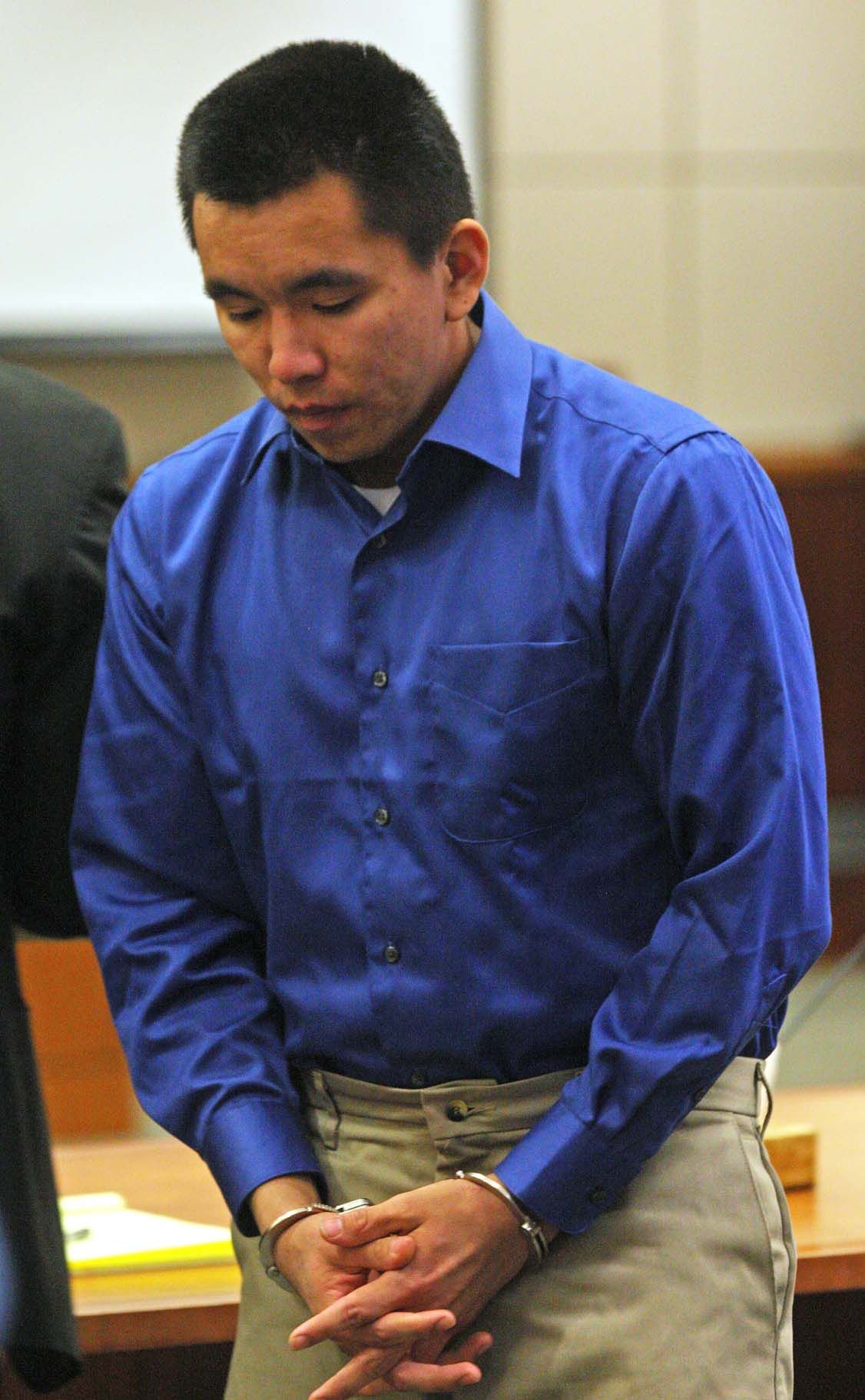 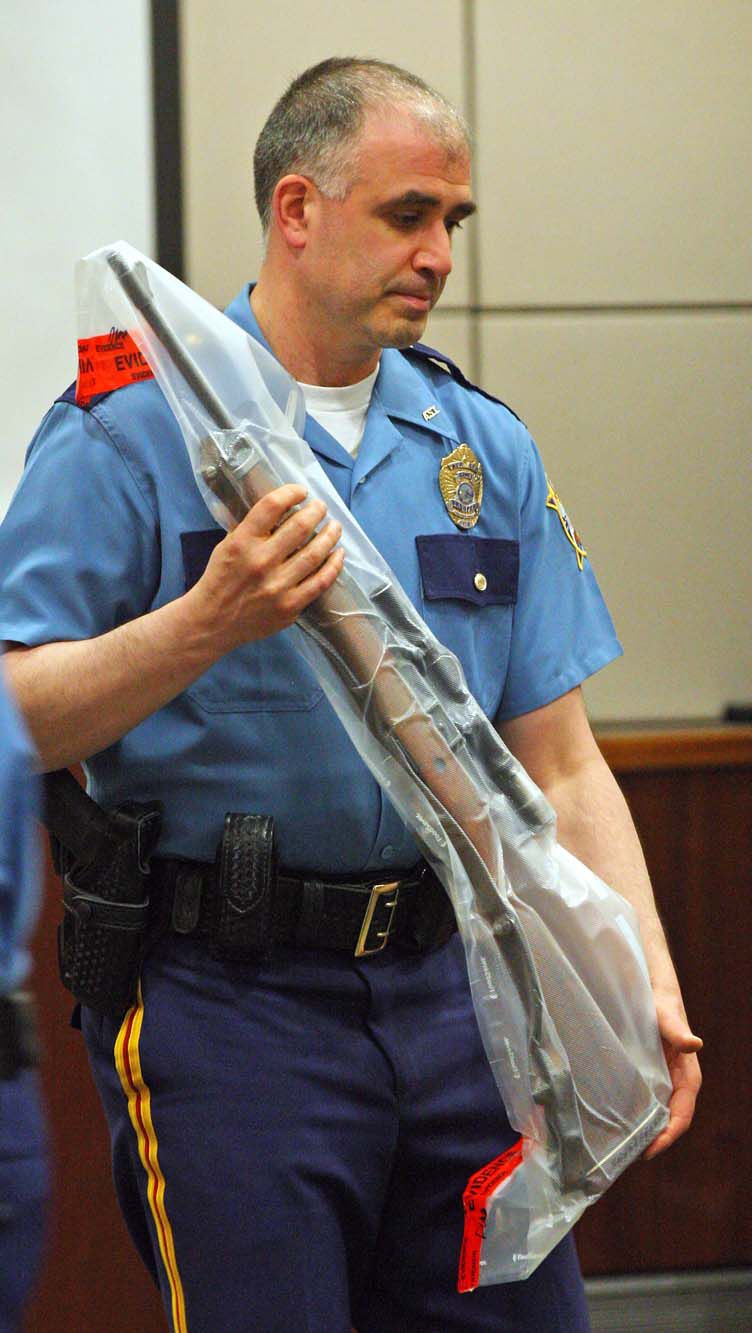 FAIRBANKS — Day two of the Nathanial Kangas murder trial began with witness testimony about the tense aftermath of the May 1, 2014, shooting deaths of Alaska State Trooper Sgt. Scott Johnson and Trooper Gabe Rich.

Kangas, 22, is accused of killing both troopers after they arrived in Tanana to arrest his father, Arvin Kangas, for threatening Village Public Safety Officer Mark Haglin.

Arvin Kangas was convicted in April 2015 of two counts of evidence tampering for manipulating the bodies and guns of the fallen troopers. He is currently serving an eight-year prison term.

First to take the stand was David Keel, the pilot who flew the troopers to the village. Keel, a 26-year Army veteran, gave a concise account covering their arrival in the village and his actions after he was told of the troopers’ deaths.

Keel said they landed in Tanana at about 2 p.m. and the mood was light as the three men made their way to Haglin’s office to fill out the necessary paperwork. As they prepared to head to Kangas’ house, it was decided that Keel, who is not a trooper, would stay behind because there weren’t enough seats for all of them in Haglin’s vehicle.

Keel said he heard footsteps about half an hour later and Haglin came in, flustered, and said both troopers had been shot.

“My first response was, ‘You’re kidding, right?’ He said no, and described the wounds to Sgt. Johnson, said Trooper Rich was shot and then thrust out Scott’s M-4 at me. I was kind of confused,” Keel said.

Keel checked the gun and then headed outside because he assumed Rich was in Haglin’s vehicle. He was angry when he found out Rich was not there.

“I wasn’t very nice and I said, ‘You just left him there?’ and he said, ‘I thought they were gonna kill me,’” Keel said.

The men called trooper dispatch to report the crime and headed to the village clinic to get medical supplies and weapons from the physicians assistant Everett Carroll, a retired Army vet.

Keel said he began to get a bad feeling as he, Carroll and Haglin approached Kangas’ house.

“I was noticing groups of people everywhere, standing around on cellphones, talking. I presumed they were reporting our activities to somebody. That sounds bad, but to me, it was like my worst nightmare scenario of combat. I’m down in an unfamiliar place, I’m separated from my crew and trying to get to them,” Keel said.

Keel stopped a vehicle and told the driver he needed to drive in front of Haglin’s vehicle and wave everybody off. The man agreed, and they resumed driving until Haglin spotted Arvin and Nathanial in a group of people. Keel jumped out and “threw down on everybody,” ordering them to lie down face first. He checked for weapons and left Haglin outside to watch them while he and Carroll checked the house.

Keel said he found a woman, later identified as Arvin’s wife, Judy, standing near Johnson and Rich’s bodies and ordered her to put her hands up. He cleared the house with the help of Carroll and confirmed both troopers were dead.

“I got very angry and kicked a box, and the woman on the couch asked me why I was so upset,” Keel said.

Keel said the decision was made to take Nathanial Kangas into custody because it was less dangerous to do it then rather than wait until backup arrived. Nathanial kept apologizing after he was handcuffed and put into Haglin’s vehicle, Keel said.

When asked by District Attorney Gregg Olson what his feelings were that day, Keel said, “To me, this was not a time to be courteous and nice. I’m a soldier. I don’t know police officer’s training. When it comes to making something happen, soldiers are direct, they bark orders that people either follow or they pay the price. Every second ticking away was less chance Scott and Gabe had,” Keel said. “I was trying to get to them, that’s all I cared about.”

Carroll took the stand after Keel and gave much the same account of events. He was followed by Trooper Lt. Deputy Commander Brian Wassmann, who was in command of the five-member SERT unit that responded to the shooting. SERT is a high-risk incident response team comprised of troopers and municipal police officers.

Wassmann said his initial task upon landing in the village was to contain the situation until more troopers got there.

“We had several concerns in Tanana because we had one suspect in custody but knew that Arvin Kangas was still at large,” Wassmann said. “We also had information that there was a fairly organized group of anti-government folks in Tanana. At the time, I understood that there could be a revolt, or people who would come to the crime scene and try to confront us.”

Wassmann characterized the first 30 minutes of the response as “tense and uncertain,” and said the SERT team was initially unable to contact command staff in Fairbanks and Anchorage because of the lack of cellphone service in Tanana. They were able to establish communications and request more help after they retrieved a landline phone from Kangas’ home, Wassmann said.

After more troopers arrived, Wassmann had one of them escort Nathanial to Fairbanks so he could concentrate on finding Arvin and “prevent a possible confrontation with others in the village,” Wassermann said.

Wassman said he got a tip at about 7 p.m. that Arvin was at a house in the village. He and other team members responded to the house and Arvin went inside after Wassman yelled for him to surrender. Arvin refused to come out for several hours and was finally taken into custody around 10 p.m.

After a short break, Trooper Ramin Dunford took the stand. Dunford, an investigator with the Alaska Bureau of Investigation, flew to Tanana with several other investigators to document the crime scene. Dunford found Nathanial’s Ruger mini-14 in the house and noticed the magazine had been loaded with an alternating series of hard rounds — meant to penetrate and go through an object — and softer rounds, which are meant to fragment and cause damage inside the object.

The atmosphere in the courtroom grew somber as Dunford showed photos of the scene and explained what they showed. Arvin’s overalls, which were found on the living room floor, were smeared with blood and had a blue thread from a trooper uniform stuck to them. Johnson’s gun was shown to be out of its holster and on the floor by his side, while all three of the restraints on Rich’s holster had been unsnapped or cleared to make it appear as if he was in the act of pulling his gun when he fell.

Many of the photos were not shown in the courtroom and will be made available to the jury during deliberations.

The prosecution showed video footage taken by one of the villagers that showed Arvin arguing with the troopers as they try to talk to him about threatening the VPSO. Kangas was immediately combative and hostile, and told the troopers they were crazy “neo-colonialists” who were only there to help white people and to take his money, among other things.

The courtroom also heard audio from Johnson and Rich’s personal audio recorders, which continued to record for hours after they were slain.

The conversation moved to the porch, and Arvin can be heard bellowing and cursing at the troopers in petulant outrage. He was soon joined by his wife, Judy, who began stridently hectoring the troopers as well. Through it all, both troopers remained calm, professional and almost jovial as they tried to reason with Arvin until he abruptly declared he was going inside. A struggle is heard, then seven loud shots, followed by shouting and screaming from the three Kangases.

Arvin and Nathanial can be heard leaving but they return several minutes later. The sound of a gun slide being racked was followed by repeated, anguished entreaties to “God the creator” from Nathanial. He and Arvin discussed what to do with the marijuana plants in the house and they left again. The audio spooled on in silence for almost 15 minutes until pilot Keel is heard knocking on the door and ordering Judy to put her arms up.

The trial continues today at the Rabinowitz Courthouse.