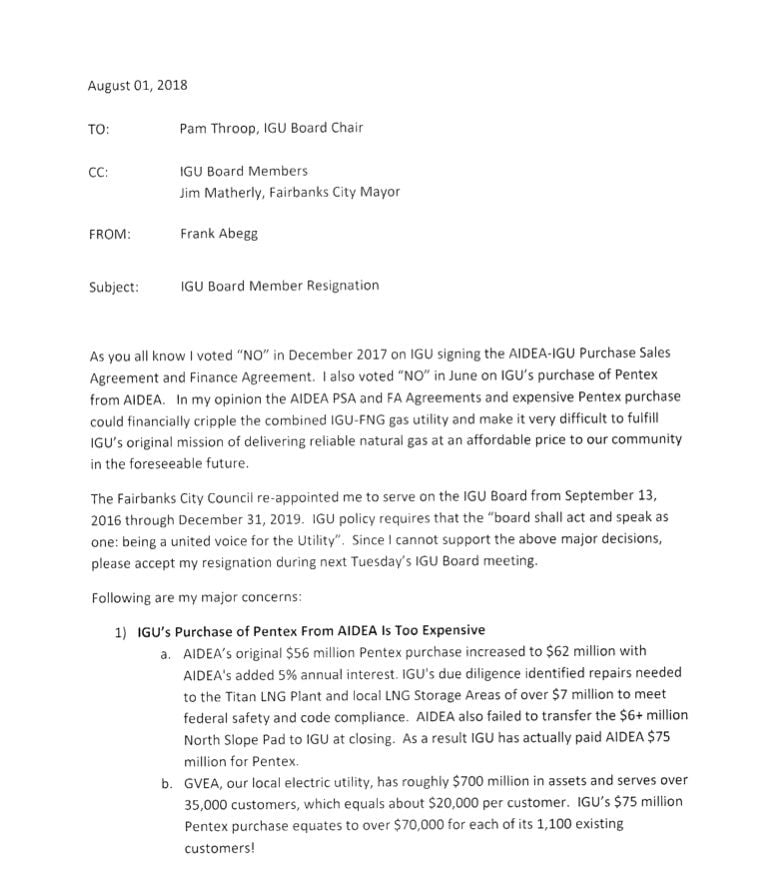 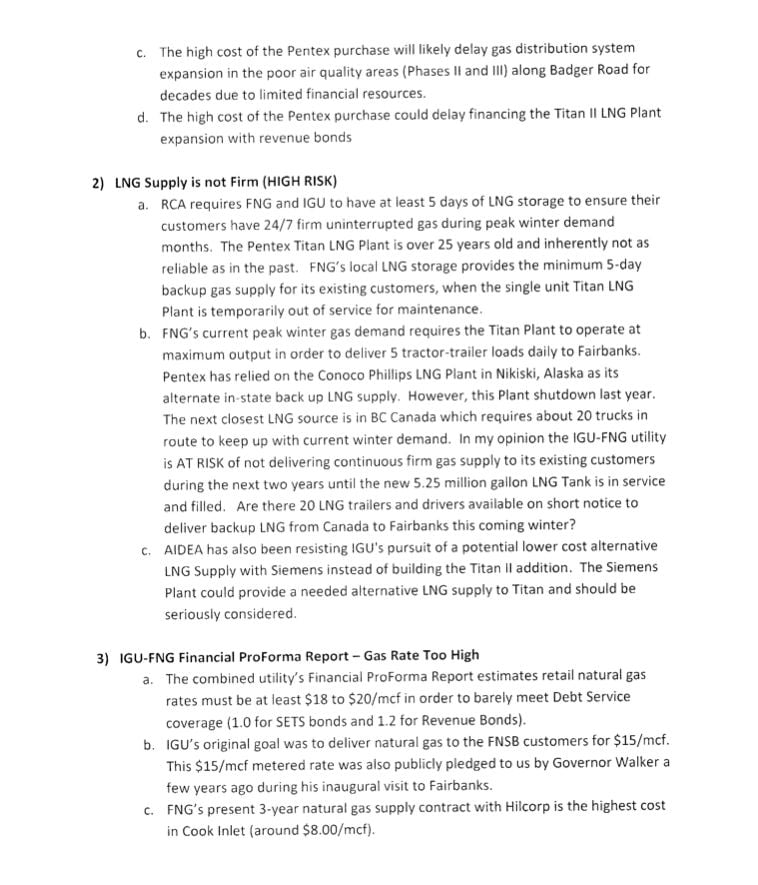 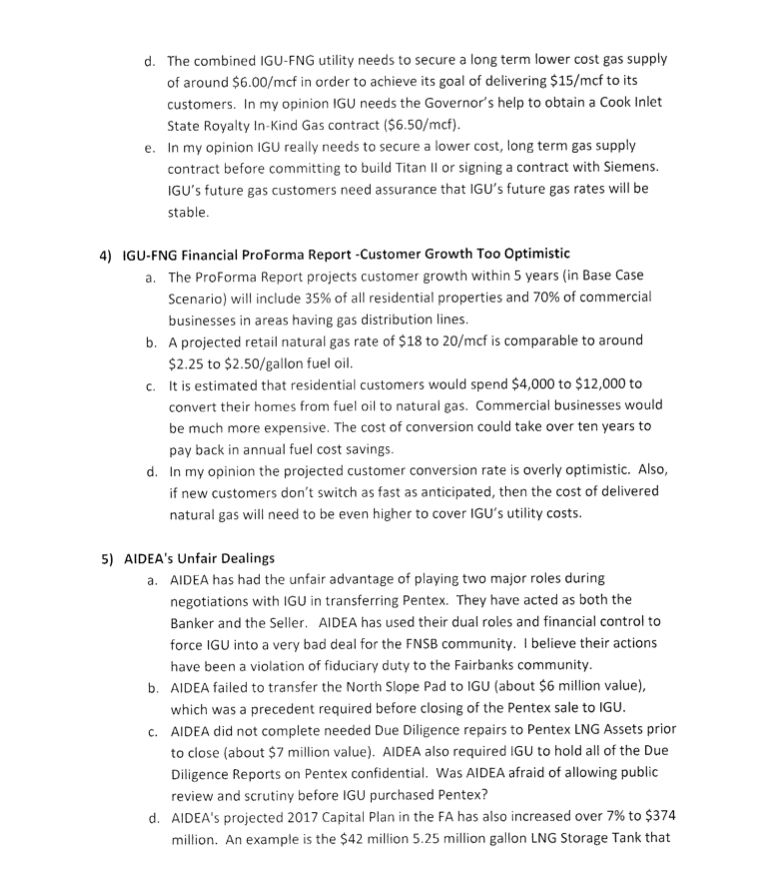 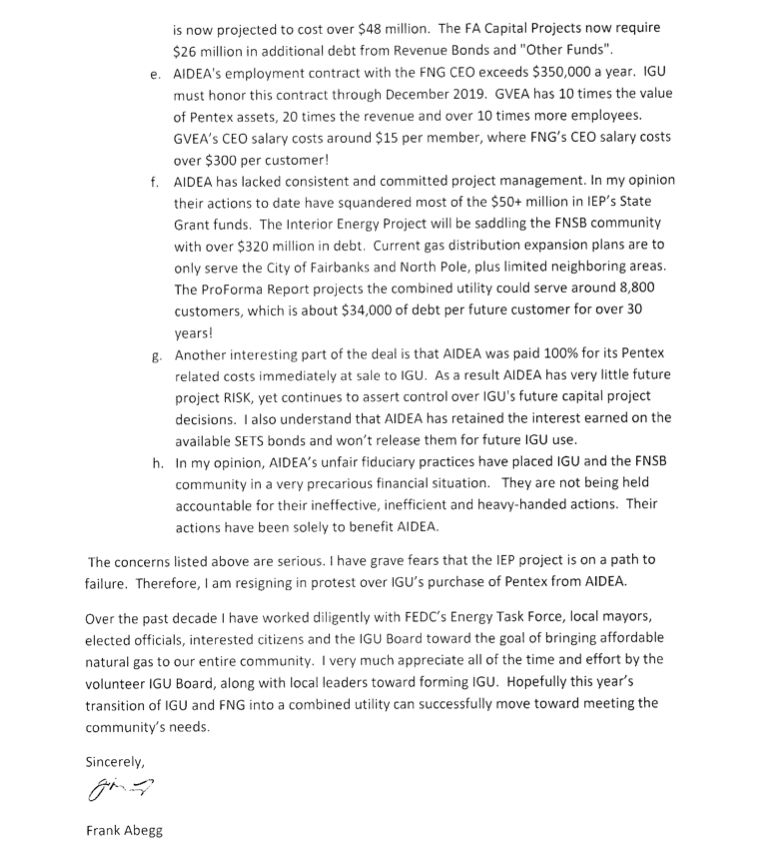 FAIRBANKS — Claims of unfair business practices from a state entity, incomplete information, crippling debt and unrealistic growth projections were among a long list of grievances cited in the resignation letter of Interior Gas Utility board member Frank Abegg.

His resignation was effective at the end of a Tuesday night board meeting.

In his four-page letter, Abegg states his main reason for resigning was IGU’s purchase of Pentex Natural Gas, but he expands in detail on five factors contributing to his decision.

Abegg twice voted against IGU’s roughly $60 million acquisition of Pentex from the Alaska Industrial Development and Export Authority. AIDEA also provided the loan to purchase Pentex, which was ultimately approved in June.

“I have grave fears that the IEP (Interior Energy Project) project is on a path to failure,” Abegg states in his letter.

Additionally, Abegg cites his opposition to an IGU policy that states “the board shall act and speak as one: being a united voice for the utility.”

A lively board discussion took place regarding the policy, with an unofficial consensus being reached that the policy doesn’t prevent members from publicly expressing their opinion outside of meetings.

Abegg had been the city of Fairbanks-appointed representative on the board since September 2016. His term was set to expire the last day of 2019.

According to Abegg’s biography posted on IGU’s website, he has 40 years experience in electric-power and energy industries. He was previously vice president of power production at Golden Valley Electric Association and plant superintendent at the Fairbanks Municipal Utilities system power plant.

In the five factors Abegg expands upon, he claims Pentex was too expensive, a consistent supply of liquefied natural gas is at high risk, gas rates are too high, growth projections are too optimistic and that AIDEA dealt unfairly with IGU.

Many of the charges have been voiced by Abegg and others throughout the process.

Regarding claims of unfair business dealings, Abegg says it was wrong for AIDEA to take the role of both seller and banker in the transfer of Pentex.

“AIDEA has used their dual roles and financial controls to force IGU into a very bad deal for the FNSB (Fairbanks North Star Borough) community,” according to Abegg.

Abegg was critical of AIDEA’s mandate that due diligence reports on Pentex remained confidential during negotiations.

“Was AIDEA afraid of allowing public review and scrutiny before IGU purchased Pentex?” Abegg asks in his letter.

He also claims AIDEA has not upheld multiple elements of the deal, including the transfer of a $6 million North Slope pad to IGU and not completing $7 million in due diligence repairs to Pentex assets.

Abegg asserts that AIDEA has placed IGU and the borough in a precarious financial situation, “Their actions have been solely to benefit AIDEA,” he states.

Gene Therriault, Interior Energy Project coordinator at AIDEA, said AIDEA’s board of directors has yet to see Abegg’s charges, but he defended the agency.

Therriault said while Abegg is welcome to view the Pentex deal however he chooses, other complaints are inaccurate. He added IGU was fully informed of any changing factors and when necessary agreed to proceed given new information.

“We didn’t break a deal of any kind,” Therriault said.

In regards to the North Slope pad, Therriault said IGU’s original plan to use it commercial is not allowed by the Department of Natural Resources, but that plans to transfer assets to IGU are still progressing.

“To portray that as a failure on AIDEA’s behalf, or something underhanded, was not true,” he said.

Additional elements Abegg cites are also untrue, according to Therriault, such as a claim AIDEA is retaining interest on bonds, but those bonds haven’t even been issued.

A handful of public commenters praised Abegg for raising his concerns and urged the board to reject his resignation.

Rich Seifert said the letter put the onus on IGU to respond, saying Abegg still has his trust, but not the board of directors.

Mike Walleri agreed with many of the charges in Abegg’s letter, particularly the debt load, and thanked Abegg for bringing the concerns to light.

“I would strongly recommend you reject his resignation, because we need people like him on the board,” Walleri said.