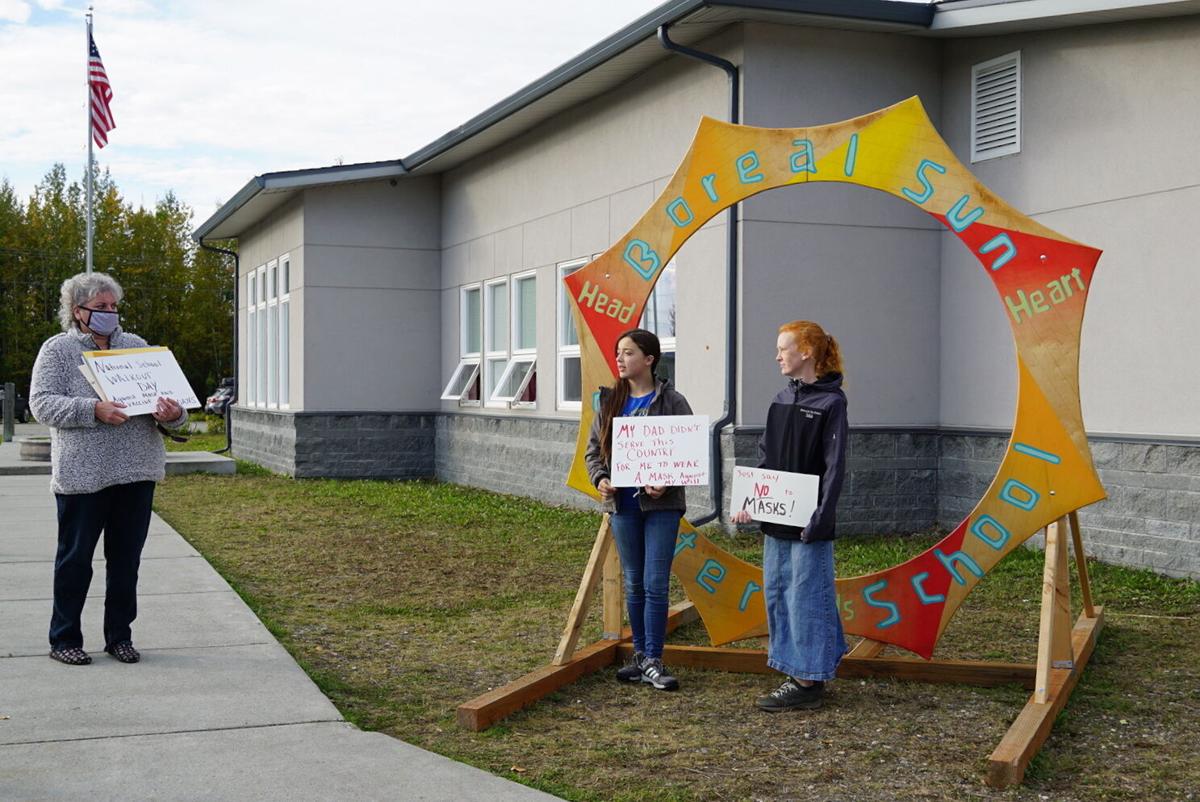 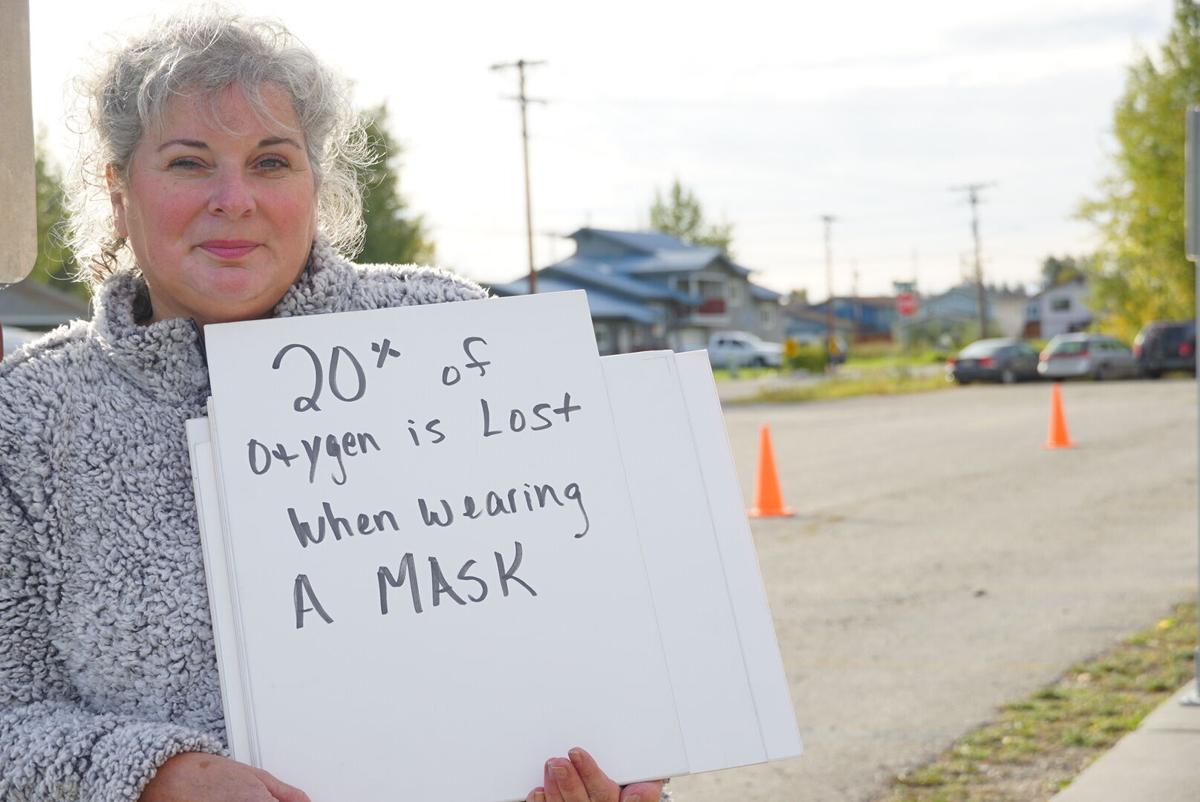 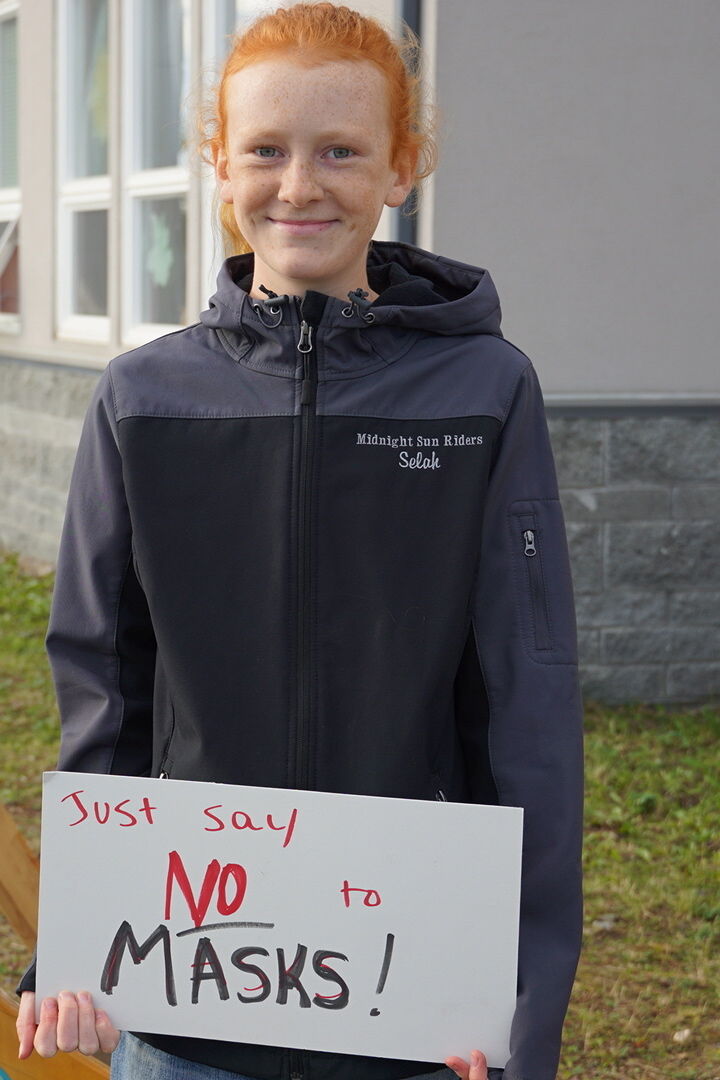 A seventh-grader, Selah Ray, holds a sign during a protest against masking mandates at schools on Friday, Sept. 10. 2021, in Fairbanks, Alaska.

A seventh-grader, Selah Ray, holds a sign during a protest against masking mandates at schools on Friday, Sept. 10. 2021, in Fairbanks, Alaska.

Four parents and three children expressed their displeasure with school mask mandates during a small protest in front of Boreal Sun Charter School on Friday morning.

“I’m against masks,” said seventh-grader Selah Ray. “They’re not exactly that effective, and it makes my head hurt.”

“We are just following the CDC guidelines,” Hilker said.

Parent Jimmie Baldwin said she “definitely didn’t feel like (her) opinion was being taken into account” in that decision. She said she thinks that “wearing masks for hours every day is not very healthy for the kids” because “it causes headaches, fatigue and, just in general, not feeling well.”

Another parent, Johanna Ray, said that 51% of parents at Boreal Sun voted against masks, but the charter school had the autonomy to decide their protocols. Johanna Ray said she is concerned about the health of her son, who complains about headaches after going to school and wearing a mask.

Protesting parents learned about a national initiative to walk out from school from Facebook, Johanna Ray said.

“We didn’t try to rally or to get a bunch of people on our side — it was just a couple of friends that we knew are on the same page,” she said. “I didn’t ask or tell my kids that they need to do this. I just said if they want to, they can, and I’ll be there to support them.”

Hilker said that children who wanted to protest needed to be released by their parents.

Cherish Baldwin, 12, was one of the children who walked out. She said at least 10 of her friends wanted to join because they were either against masks or didn’t like wearing them.

Parent Joel Baldwin said, “We are here so the kids get to express their views.” He added that he doesn’t see masks useful for children.

“Kids aren’t dying from this,” Joel Baldwin said about Covid-19. “Kids aren’t even getting very sick from this. And we’re up ending their lives for no particular reason.”

Fairbanks Memorial Hospital has been reporting treating pediatric Covid patients this past week, according to the hospital’s spokesperson Kelly Atlee. Additionally, in July, two Fairbanks children under the age of 10 developed a multisystem inflammatory syndrome — a rare severe reaction after a Covid-19 infection or exposure. Both children had to be medevaced to Anchorage for care but recovered after that, said Dr. Laura Brunner, medical director for inpatient pediatrics at FMH.

Covid-19 hospitalization rates among children rose five-fold in the past month, coinciding with the rise of the Delta variant, according to CDC’s Morbidity and Mortality Weekly Report. The data comes from 99 counties across 14 states.

“While children tend to do very well with Covid — they tend to be asymptomatic or mildly symptomatic — we still see kids get sick, we still see kids hospitalized, and we know that they can spread it to adults,” Dr. Anne Zink, Alaska’s chief medical officer, said earlier this week.

Joel Baldwin also argued that the data doesn’t show “a single case of transmission at a school from a child to an adult.”

There is at least one example of the transmission the other way around: In an elementary school in Marin County, California, an unmasked infected teacher transmitted the virus to 27 elementary school students, according to another CDC Morbidity and Mortality Weekly Report.

Lastly, Joel Baldwin was concerned that “there is no evidence at all that cloth masks work at all,” especially if not worn correctly.

The primary route for the Covid-19 to go from person to person is through respiratory particles — the particles we breath in and out. Wearing a mask “reduces transmission of infected respiratory particles in both laboratory and clinical contexts,” according to the research overview by U.S. National Academy of Sciences.

“Public mask-wearing is most effective at reducing the spread of the virus when compliance is high,” the research overview reads.

While it is hard to find controlled trials to study the ongoing pandemic, there is an observational study that found face masks 79% effective in preventing Covid-19 transmission. Mask wearing was also found 80% effective for reducing the transmission of another airborne disease, Australian influenza. Surgical masks filtered 96% of particles and cloth mask were found to filter about 60% of particles and above, depending on the size of the particle.

Dr. Angelique Ramirez, chief medical officer for Foundation Health Partners, said, “What we absolutely have to have now, though, is masking — masking is immediate. Masking stops to spread of the virus.”