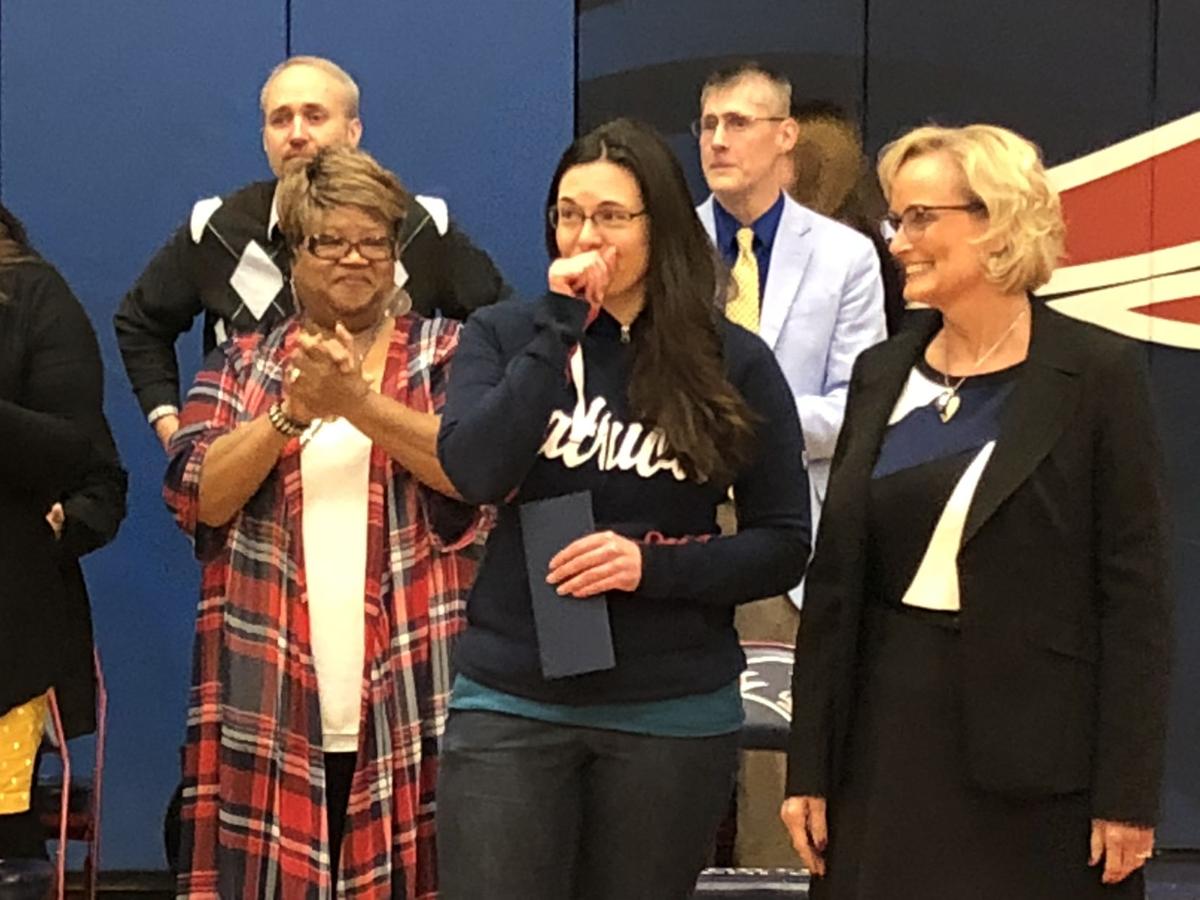 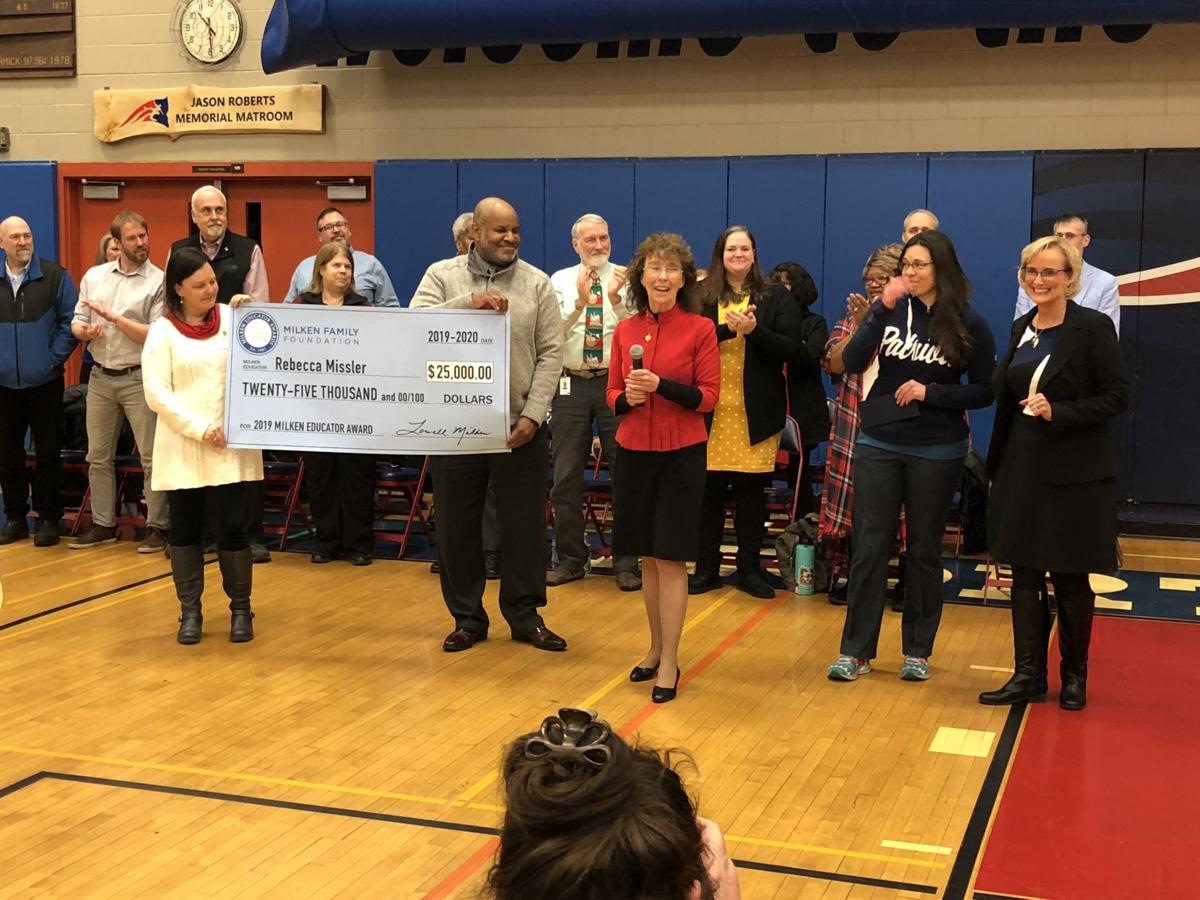 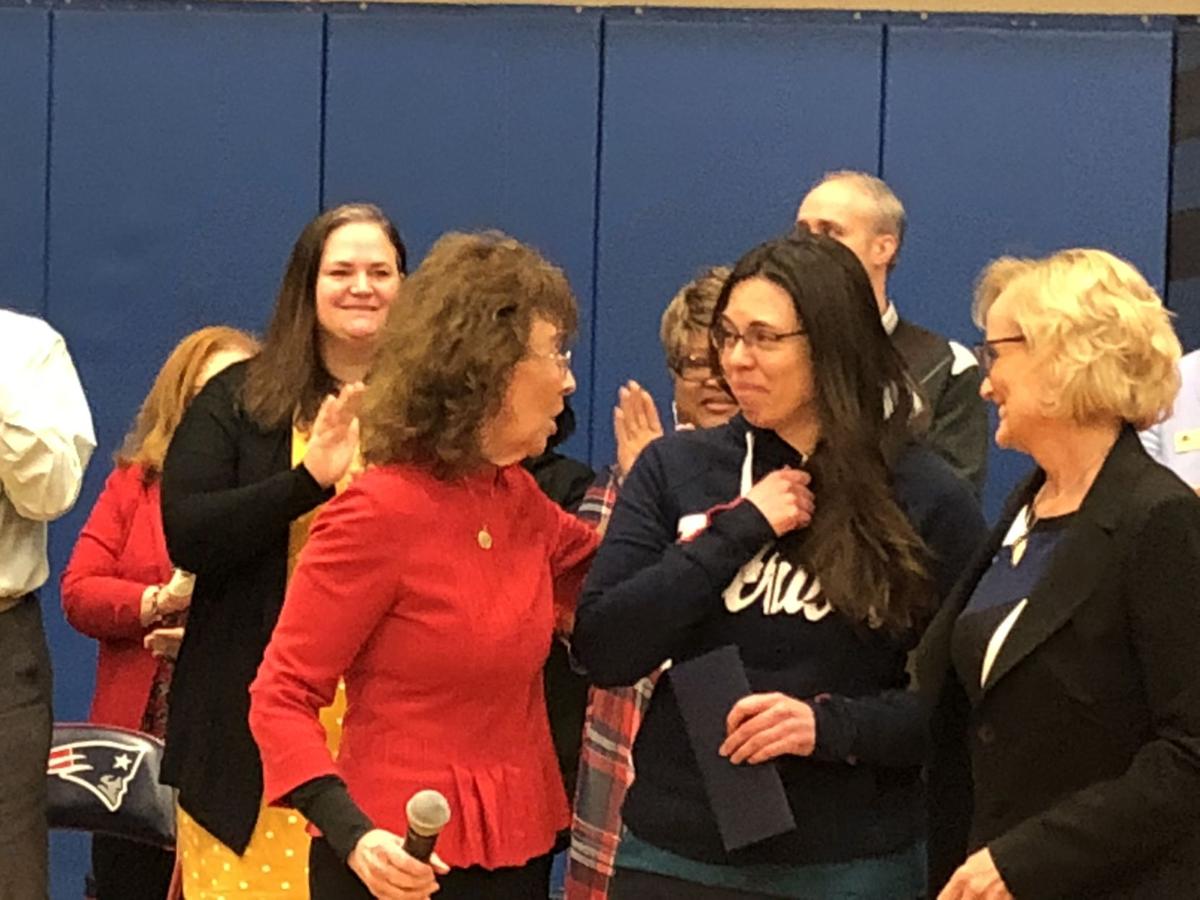 North Pole High School's gymnasium filled with cheering Tuesday morning as surprise guests announced at a pep rally that one of the school's teachers would be receiving a $25,000 prize.

Superintendent Karen Gaborik said it was a wonderful surprise to hear a Fairbanks educator was the recipient. Missler was one of the BP Teachers of Excellence last year, Gaborik noted.

During the rally in the gym, Jane Foley, Milken Educator Awards senior vice president, had student volunteers line up and gave each a green card displaying a number in an award reveal that kept building and building. When it was all laid out, the full $25,000 reflected back at the students, and Foley then asked for an envelope with the teacher’s name inside.

“The award goes to Rebecca Missler,” she called out, as the bleachers erupted into congratulatory shouting.

Missler had sat clapping on the bleachers, trying to guess which teacher had been nominated and none the wiser until her name was called. She slowly stood, under the encouragement of others beside her.

Once the announcement sunk in and previous awardees in attendance introduced themselves, Missler was asked to say a few words. She used her time to praise her students.

“You speak your mind and you’re just a great bunch of students,” she said, “and I love seeing you mature, and I love to see you take on the challenge of chemistry, and science and AP chemistry in several classes this year — just incredible students.”

Missler added that the students are the reason she comes to school every day.

In an interview following the event, she said the announcement was “absolutely unreal.”

“It felt like one of those dream sequences or movie sequences where everything around your vision is blurry and you can see the check with your name on it, but it doesn’t feel real,” she said.

As the gymnasium cleared out, Missler laughed and said she was still shaking.

Having a North Pole teacher receive the award was a great honor, according to North Pole High School Principal John Fink, who found out about the award a week ago and worked with the school district and the Milken Foundation to keep it a surprise.

Missler’s consistent quality is what Fink said he thinks helped contribute to her receiving the award. He added that she’s not a person who is “a flash in the pan.”

“She is not trying to draw attention to her; she just shows up every single day, quality,” he said. “I mean, if you go in her classroom, it’s really well-organized, clear consistent expectations, kids know they’re getting a good education.”

In addition to her prize, Missler will become a member of the National Milken Educator Network, an organization of more than 2,800 educators, and will be able to attend the Milken Educator Forum in Indianapolis in 2020.