FAIRBANKS—The Alaska Supreme Court has been asked to step into an attorney-client confidentiality issue that's become a key part of the effort by four Fairbanks men to win their exoneration for a 1997 murder they say they didn't commit.

On Wednesday, Seward inmate and former Fairbanks resident Jason Wallace filed a petition to Alaska's highest court, asking the justices to keep sealed some information that Wallace reportedly told to a public defender investigator in 2002.

According to previous court filings, the information may implicate Wallace in the 1997 death of 15-year-old John Hartman, but the contents of Wallace's statement aren't known because it remains under seal until the confidentially issue is resolved.

In the last 10 months, most recently in July, two lower courts ruled that Wallace's attorney-client privilege shouldn't keep the information out of court in the case of the men seeking exoneration for Hartman's murder. In his petition on behalf of Wallace, Fairbanks attorney Jason Gazewood argued the high court needs to take up this issue because it has far-reaching consequences. 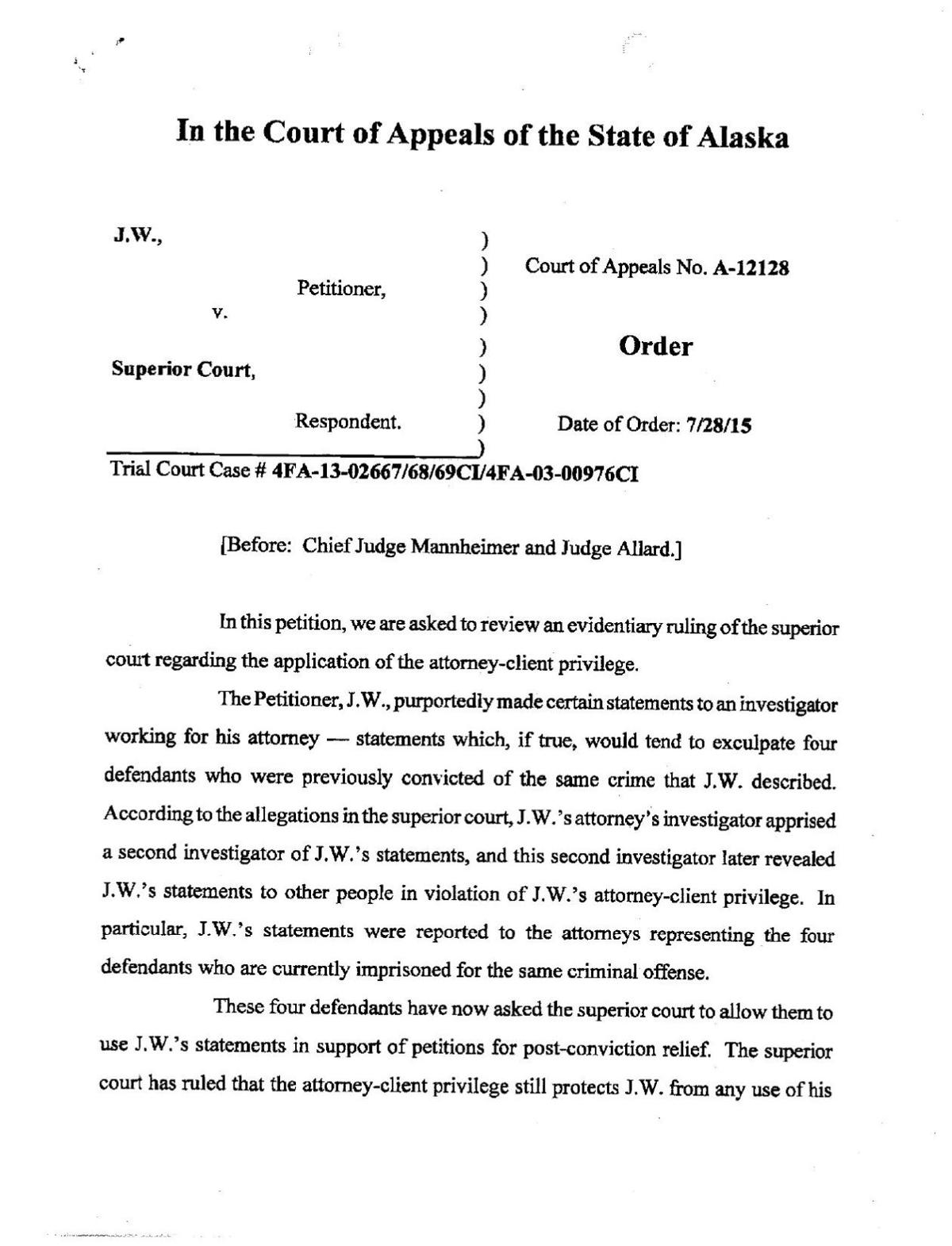 "The issues concern the bounds of confidentiality, the roles of non-lawyer assistants not bound by rules of ethics, and the consequences of an adverse ruling on the thousands of Alaskans represented by the Public Defender Agency in Alaska each year," Gazewood said.

Wallace isn't in jail for John Hartman's murder. He is serving a 70-year-sentence for an unrelated 2002 drugs-related killing.

The four men who did go to jail for killing Hartman — Marvin Roberts, Eugene Vent, Kevin Pease and George Frese, known by supporters as the Fairbanks Four —base part of their exoneration lawsuit on an alternate account of Hartman's murder. In a civil lawsuit filed in 2013 on their behalf by the Alaska Innocence Project, five former Lathrop High School students are listed as participants in Hartman's death, among them Wallace and Wallace's co-defendant in the 2002 murder case, William Z. Holmes.

Like Wallace, Holmes is serving a life sentence for the 2002 murder, but unlike Wallace, Holmes says he is involved in the 1997 Hartman murder. Holmes wrote in a 2012 affidavit that he agreed to make a sworn statement about the Hartman murder at Roberts' request because "it was the right thing to do." He wrote in his three-page hand-written account of Hartman's murder that he was driving a car looking for "drunk Natives" to beat up when he and his friends spotted Hartman walking alone. He said he waited in the car while his passengers got out, fatally beat Hartman and then returned to the car.

A civil bench trial in the exoneration lawsuit is scheduled for Oct. 5 but could be delayed if Wallace's attorney-client privilege issue is taken up by the Supreme Court.

While Wallace is trying to use his Sixth Amendment Constitutional right to counsel to protect his statements made to a Public Defender Agency employee, the four men trying to win exoneration are asserting another U.S. Constitutional protection in preparation for the October trial.

As part of their exoneration lawsuit, the four signed affidavits stating they are innocent of Hartman's murder. But they have resisted efforts by prosecutors to cross-examine them about some of their statements that were suppressed as evidence by the trial judge in 1999, according to a motion filed Thursday by prosecutor Adrienne Bachman with the Office of Special Prosecutions and Appeals. The four men cite their Fifth Amendment protections against self-incrimination.

Bachman's motion says the Fifth Amendment protections shouldn't apply in this case. She asks that the judge either force them to submit to questioning or withdraw their sworn statements of being innocent.

"If the petitioners continue to assert a privilege to not discuss their former statements (because of fear of self-incrimination) and if this court declines to admit the previously suppressed evidence, the state will be put in the untenable position of confronting petitioner testimony without being able to challenge that testimony with evidence of the petitioner's 1997 state of mind and admissions to criminal conduct," she wrote.