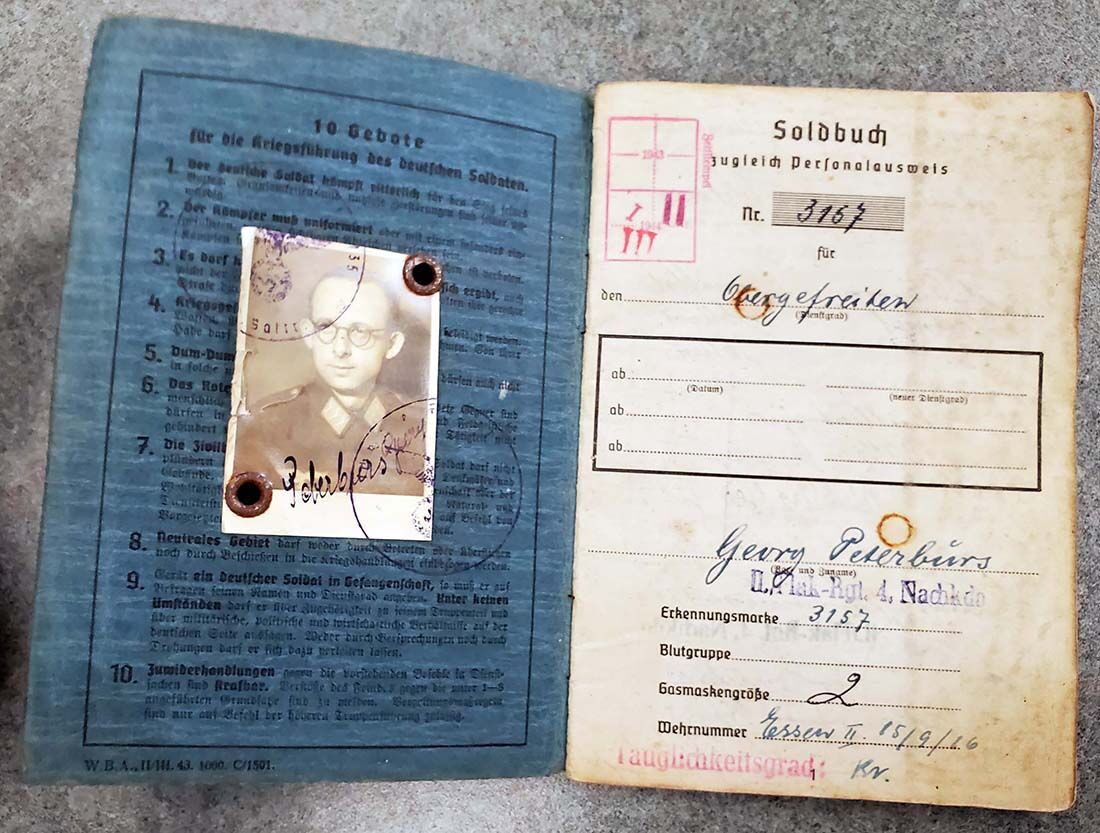 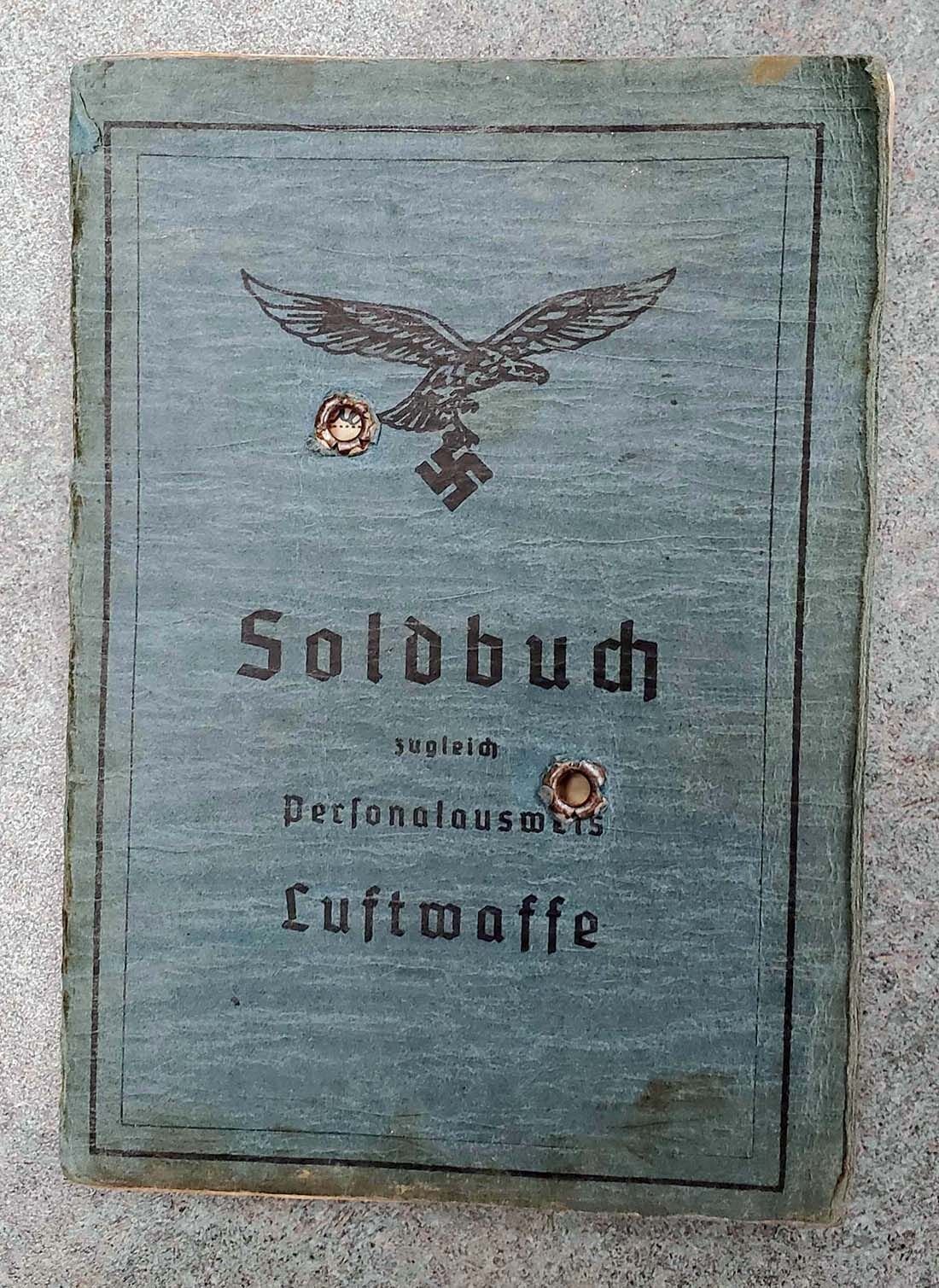 A Fairbanks man found a soldbuch in a Fairbanks dumpster. It's a German document issued to soldiers during World War II in Germany's armed forces. Gary Black/News-Miner 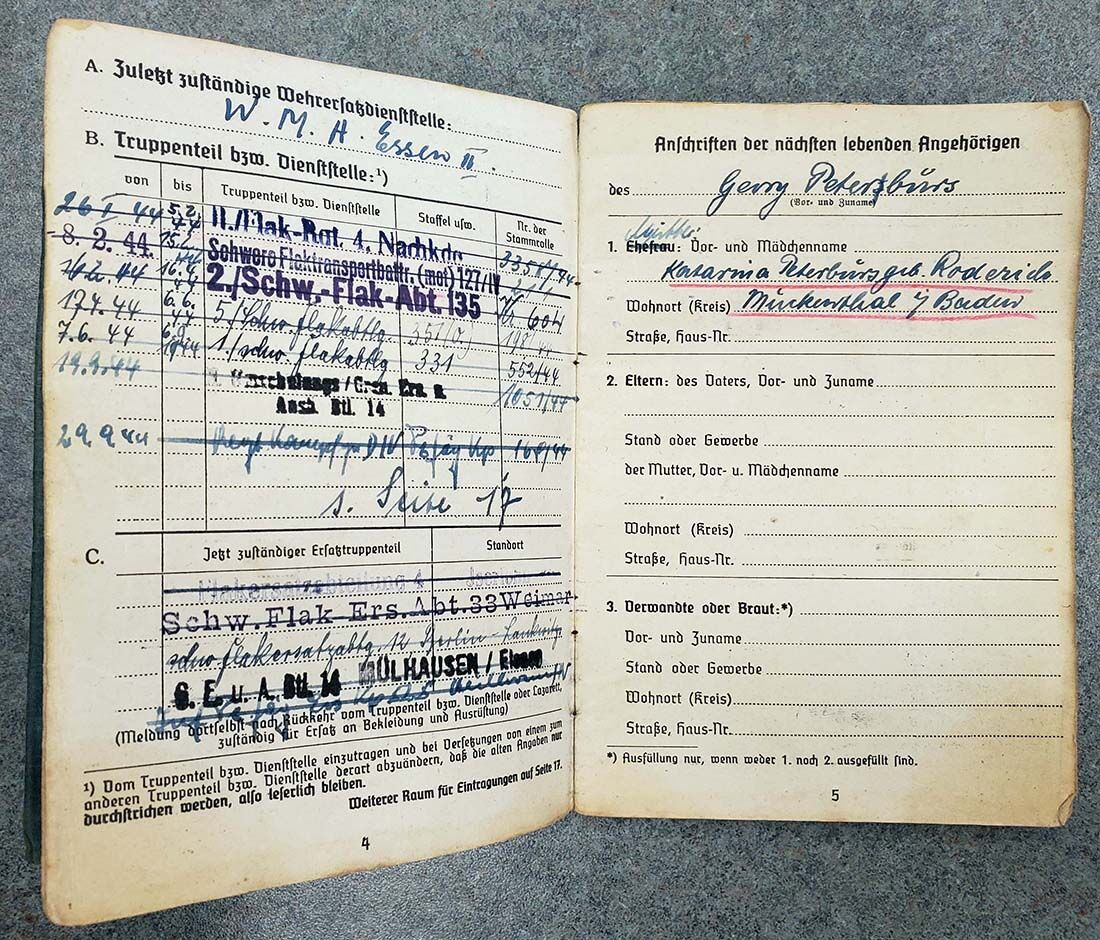 A soldbuch was issued to all German military members in World War II. Gary Black/News-Miner 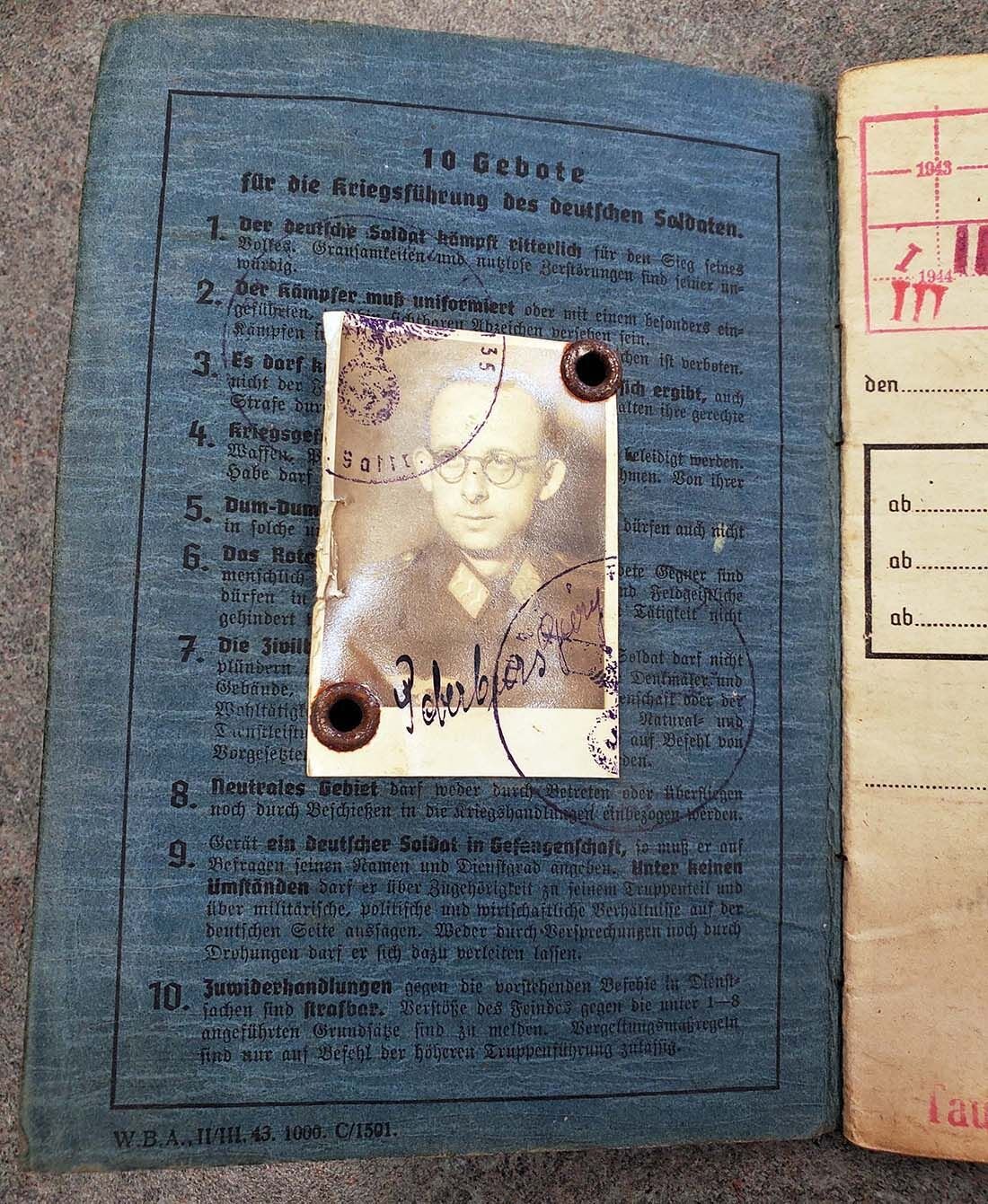 The soldbuch of Georg Peterburs, a corporal in the Nazi Luftwaffe, or Air Force, was found by a Fairbanks resident this year in a dumpster in Fairbanks. Gary Black/News-Miner

A Fairbanks man found a soldbuch in a Fairbanks dumpster. It's a German document issued to soldiers during World War II in Germany's armed forces. Gary Black/News-Miner

A soldbuch was issued to all German military members in World War II. Gary Black/News-Miner

The soldbuch of Georg Peterburs, a corporal in the Nazi Luftwaffe, or Air Force, was found by a Fairbanks resident this year in a dumpster in Fairbanks. Gary Black/News-Miner

A World War II German soldier’s identification papers, in pristine condition, have been discovered in a public dumpster at a transfer station in Fairbanks.

TV’s “History Hunter” Craig Gottlieb and other experts asked by the News-Miner to examine the find offered insights into the roughly 75-year-old document’s history and significance as a military artifact.

The soldbuch of Georg Peterburs, a corporal in the Nazi Luftwaffe, or Air Force, was found by a Fairbanks resident this year, along with a trove of family photos, disposed of at the Farmer’s Loop West Transfer site. The small military ID book contains a photo of Peterburs, in uniform, and handwritten information neatly entered about his military service.

“Every single soldier in the army, navy and air force in the German military had to carry this document. Essentially, it functioned as a micro-personnel file,” said Gottlieb, known as the “History Hunter “ for his appearances on the History and Science TV channels, as a leading U.S. expert on military antiques.

Asked to examine photos of the document, Gottlieb described Peterburs as “a low-ranking soldier, really one guy out of a million, who most likely was conscripted and forced to fight on the wrong side of a very bad war.”

Relatives of Peterburs contacted and interviewed by the News-Miner confirmed that they disposed of the soldbuch, as they were preparing to move out of state. The documents had been stored in the basement of their home.

They said that Peterburs had been drafted to serve and was captured in France, where he was held as a prisoner of war and worked as a farmhand. They said he emigrated to the Midwest after the war, learned to speak English and worked as a plumber. He became a U.S. citizen and died 30 years ago.

Peterburs was described as a “favorite uncle” by the same relatives, who said he did not discuss the Nazi war effort or his role as a soldier. The relatives declined to be identified for the article.

As for the historical significance of the document, Peterburs’ soldbuch offers insight into how “modern states identified, documented and kept track of citizens,” said Dr. Tyler C. Kirk, an expert in modern European history and assistant history professor at University of Alaska Fairbanks.

“As a historian who focuses on the Soviet Union, I examine such documents for important information about the individuals who participated in the events I’m investigating,” said Kirk, who also is assistant director of Arctic and Northern Studies at UAF.

“These documents can serve as springboards to other topics and sometimes even a window onto a much larger historical landscape.”

Dr. Volker Benkert, a history and Jewish studies professor at Arizona State University, also studied photos of the document, at the request of the News-Miner.

He described the soldbuch “as a standard issue to every member of the German armed forces.” It lists the time served in the military, service branch and units, decorations, leave time and significant dates related to military service.

The document indicates that Peterburs served in the air force from January 1944 until the end of the war. His rank was obergefreiter — lance corporal — and “he was clearly not very decorated,” Benkert noted.

“Serving in a heavy anti-air craft battery (likely serving an 8.8cm mobile gun, the most common gun considered heavy artillery), he probably never saw any time in the air,” Benkert wrote in an email.

Peterburs stated he was from Essen, which is in western Germany. He listed his mother as primary contact.

Benkert theorized that the soldier “must either be very young to be called up so late in the war, or he must have been held back either for being not very fit or working in a field considered important for the war effort.

“He could even be one of the so-called Flakhelfer, school kids drafted in the late stages of the war to serve in anti-aircraft batteries.”