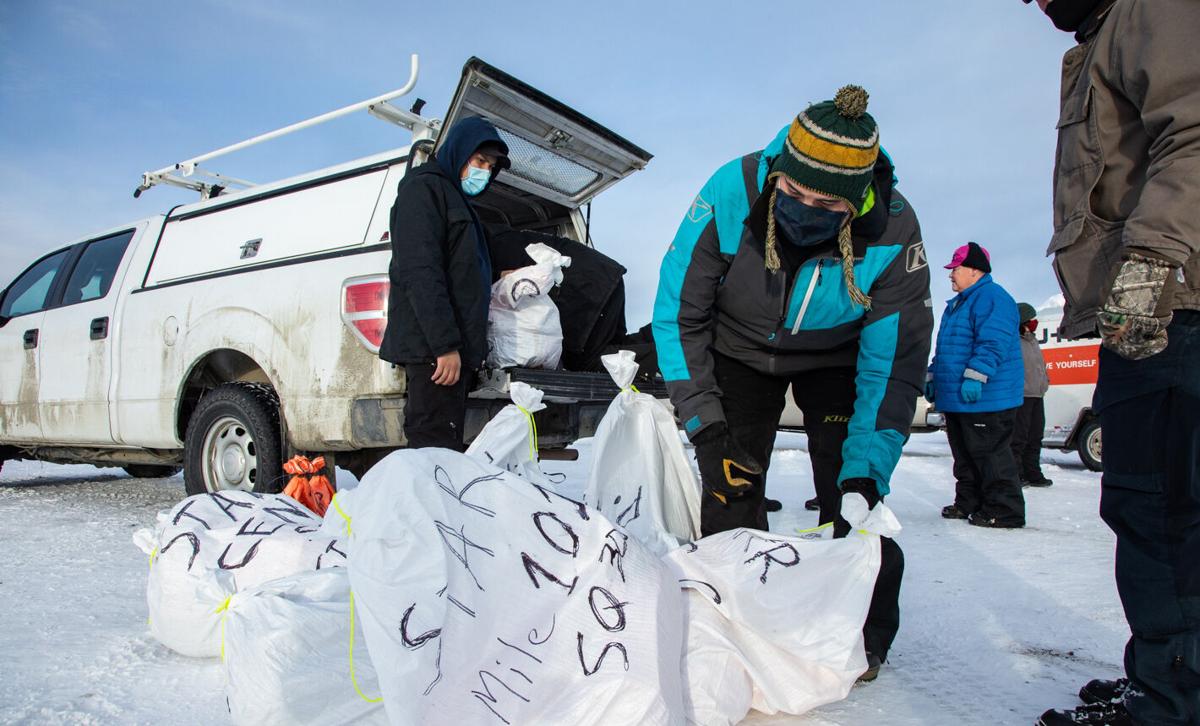 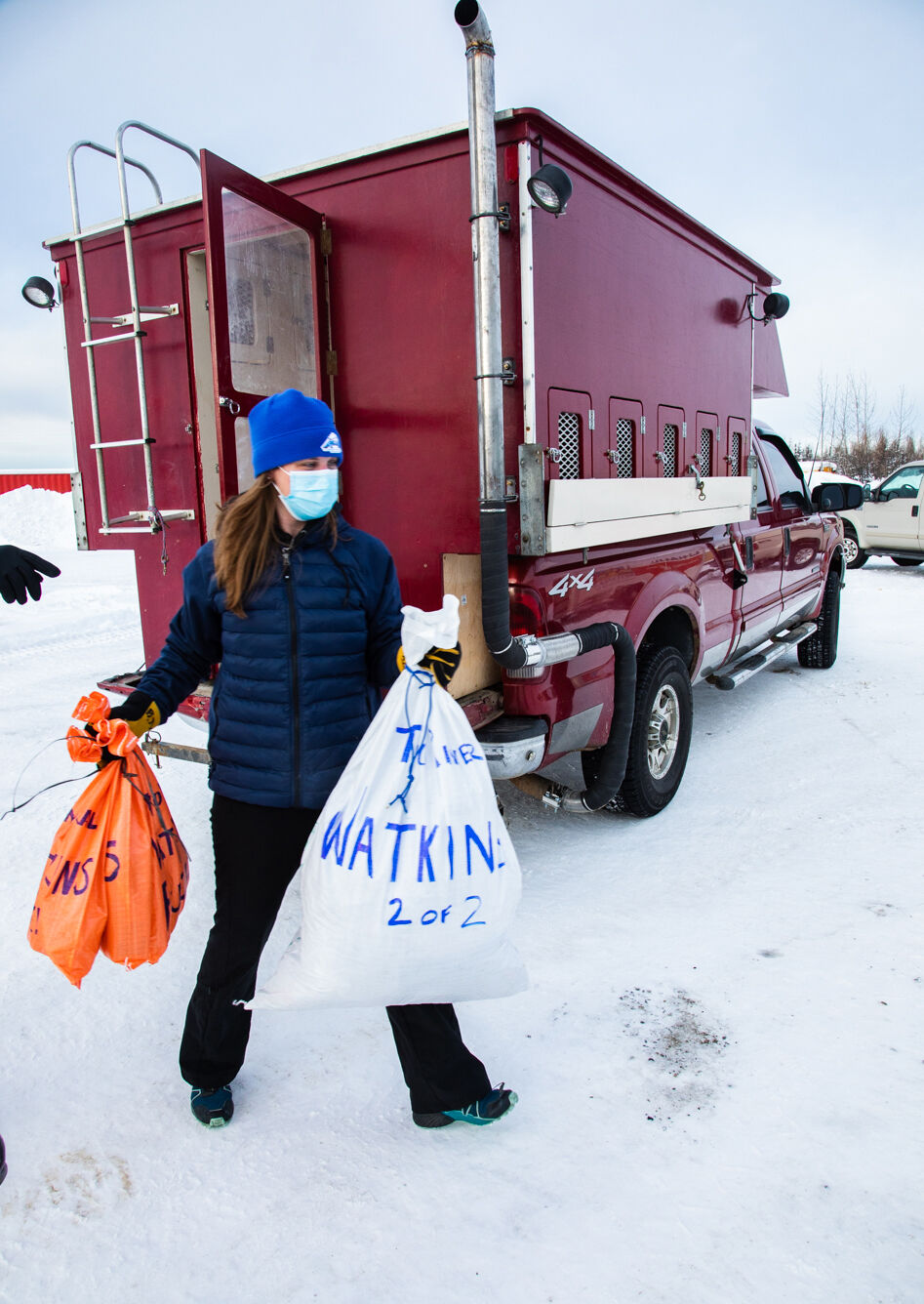 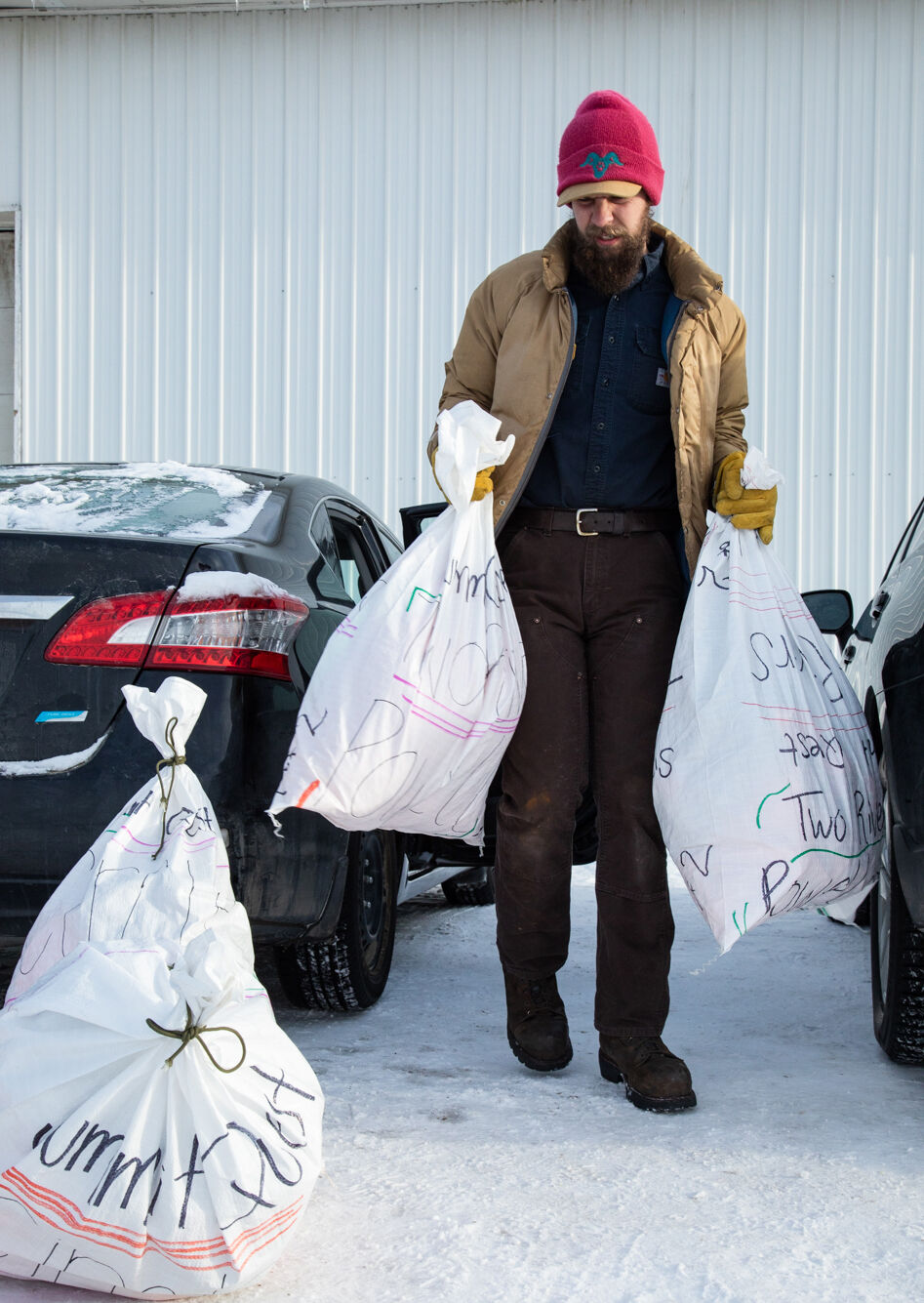 Musher Dan Powell unloads drop bags for the Summit Quest 300 on Thursday afternoon. This will be Powell's second mid-distance mushing race, and his first attempt racing on the Yukon Quest trail. Feb. 11, 2021.

Musher Dan Powell unloads drop bags for the Summit Quest 300 on Thursday afternoon. This will be Powell's second mid-distance mushing race, and his first attempt racing on the Yukon Quest trail. Feb. 11, 2021.

With the 1,000 Mile Yukon Quest International Sled Dog Race being canceled due to COVID-19, all paws have turned their attention to the Summit Quest 300, which starts 11 a.m. Saturday at Pleasant Valley Store, 23 Mile Chena Hot Springs Road.

In the world of dog mushing, to qualify for the grand stage of 1,000 mile races, participants must first complete shorter qualifying races, such as the Summit Quest 300. This often results in rosters full of rookies.

The term rookie can carry with it connotations of being unprepared and naive. But to be a rookie, one must be willing to venture into the unknown and face new challenges in new situations — key ingredients for an adventure.

Rookies and veterans alike can expect to be tested early and often during the SQ300, which features notoriously tough terrain, including Rosebud and Eagle summits, as well as two trips along Birch Creek, a notoriously cold and circuitous slog.

As race marshal Doug Grilliot points out, “There’s so many different levels of people we’re going to have racing. … There are certain standards you’re going to have to meet whether you’re a rookie or not.”

Specifically, Grilliot references mushers’ ability to adjust. “There’s so much adapting for these rookies. The ones that do really well, something will go wrong, they’ll step back and they’ll fix it,” he said.

Rookie Dan Powell from Goldstream Valley is adapting his game plan after running the Copper Basin 300 earlier this year, his first ever mid-distance race. With a team full of 1-year-old dogs, Powell had been hesitant to push them too hard, until he did some training runs with more experienced mushers.

“It opened my eyes, the dogs are much more capable than I realized. … It greatly increased my confidence in how far my dogs can run,” he said, adding that he’ll also lighten his load with less food and water.

Powell, who gives his wife, Kaycee Powell, full credit for building and training their kennel, said it was discouraging being at the back of the pack for the entire Copper Basin 300, but he got a positive boost when he posted one of the fastest times on the last leg of the race.

Competing in his first mid-distance race is rookie Dereck “DJ” Starr from Huslia. During bag drops on Thursday afternoon, Starr took the opportunity to glean advice from veterans and officials. “Don’t get really into race mode and try to push the dogs too hard. Take it easy ... don’t look too far ahead of yourself,” they told him.

DJ got into mushing four years ago, or “playing with dogs” as he puts it.

For him it’s all about the adventure. “I live this life to live. So when you gotta get out of your comfort zone and step into the unknown, that’s what makes ‘life’ life,” he said.

Given that his training grounds in Huslia are almost completely flat, Starr knows his comfort zone is about to be expanded. “I’m gonna have to work going up those hills,” he said.

You can have a lifetime of experience but still be considered a rookie, as in the case of Bridgett Watkins. Watkins is the daughter of three-time Yukon Quest champion Allen Moore. She started running dogs at the age of 5, competed in sprint races throughout childhood and ventured into mid-distance races after college, but stepped back nine years ago when she became pregnant.

Watkins has been a Quest fixture behind the scenes for years, handling not just for her dad, but also her stepmother Aliy Zirkle, the first woman to ever win the Yukon Quest.

Even with a wealth of knowledge, or perhaps because of, Watkins is understandably nervous. “There’s all these things that you really have to learn, and I feel like I’ve learned quite a bit, but on my way here I called my dad and said ‘Man, I make the stupidest mistakes! Why’d I do that today?”

Regardless of experience, rookies tend to have one major goal in focus.

“I just want to do it and get to the finish line,” Watkins said.

DJ Starr said “if my team finishes the race, it’s a win.”

And for Powell, “I would definitely say I’m not competing in the race. My goal is to finish with the yearlings, to get them up and over Eagle Summit.”