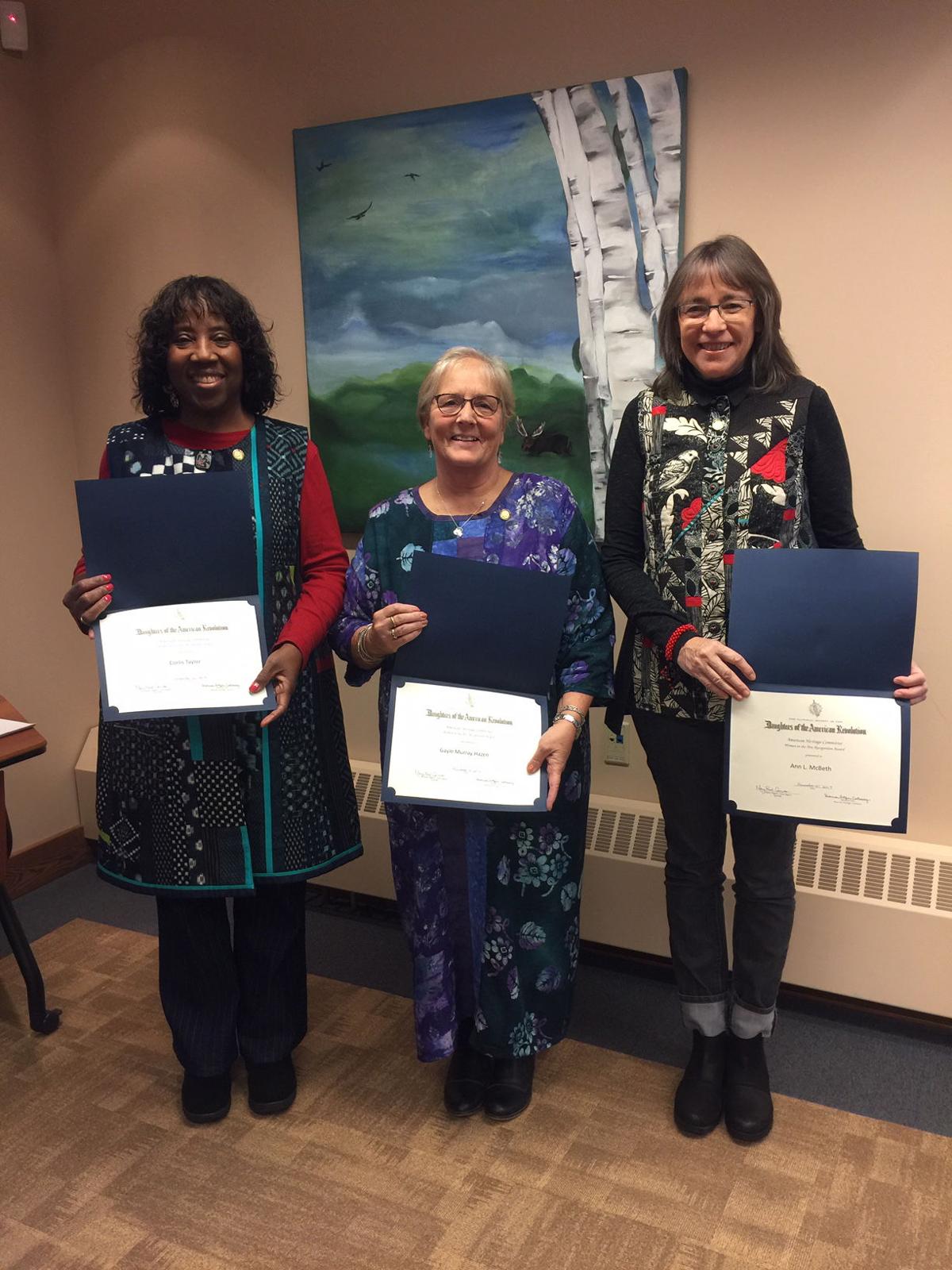 Award winners include, from left, Corlis Taylor, Gayle Hazen, Ann McBeth and Julie Scott (who is not pictured). 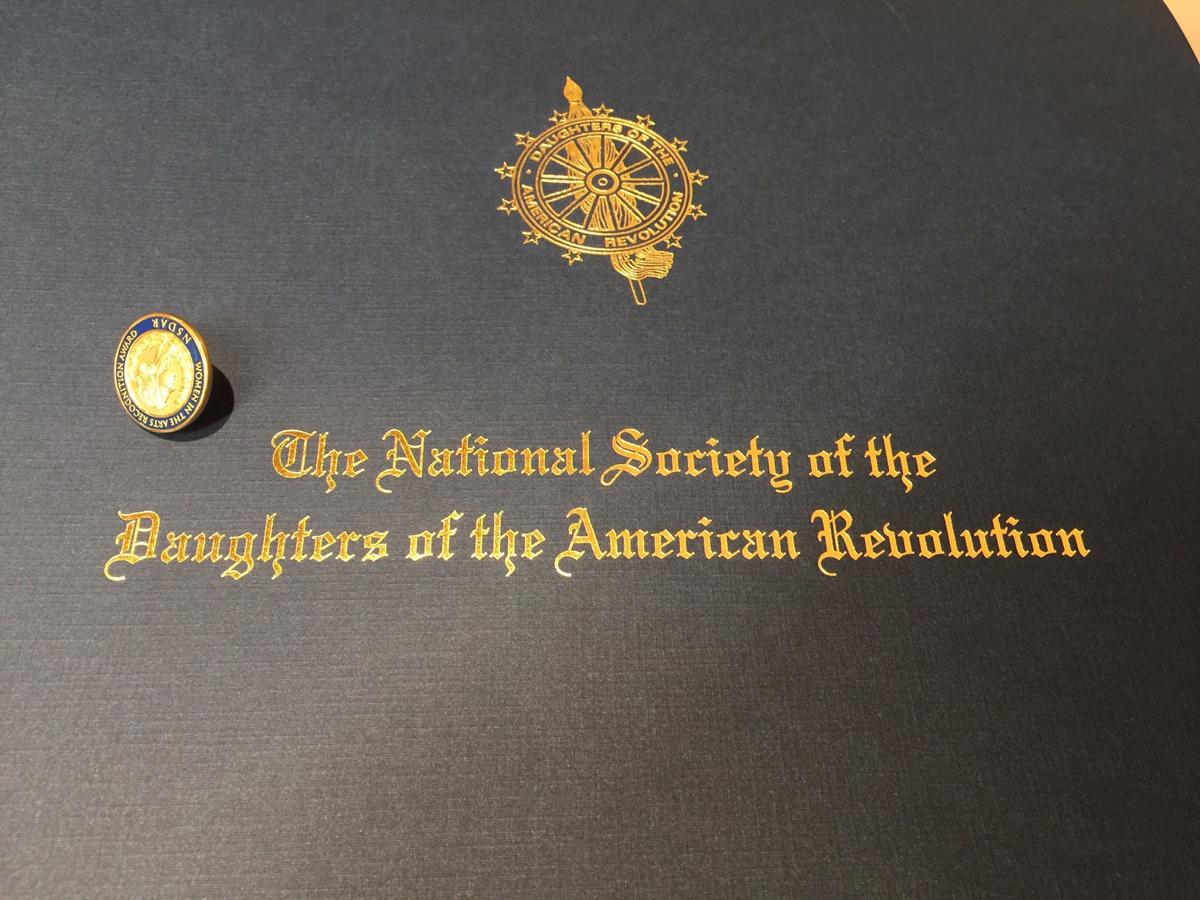 Each award winner received a special certificate and a pin. 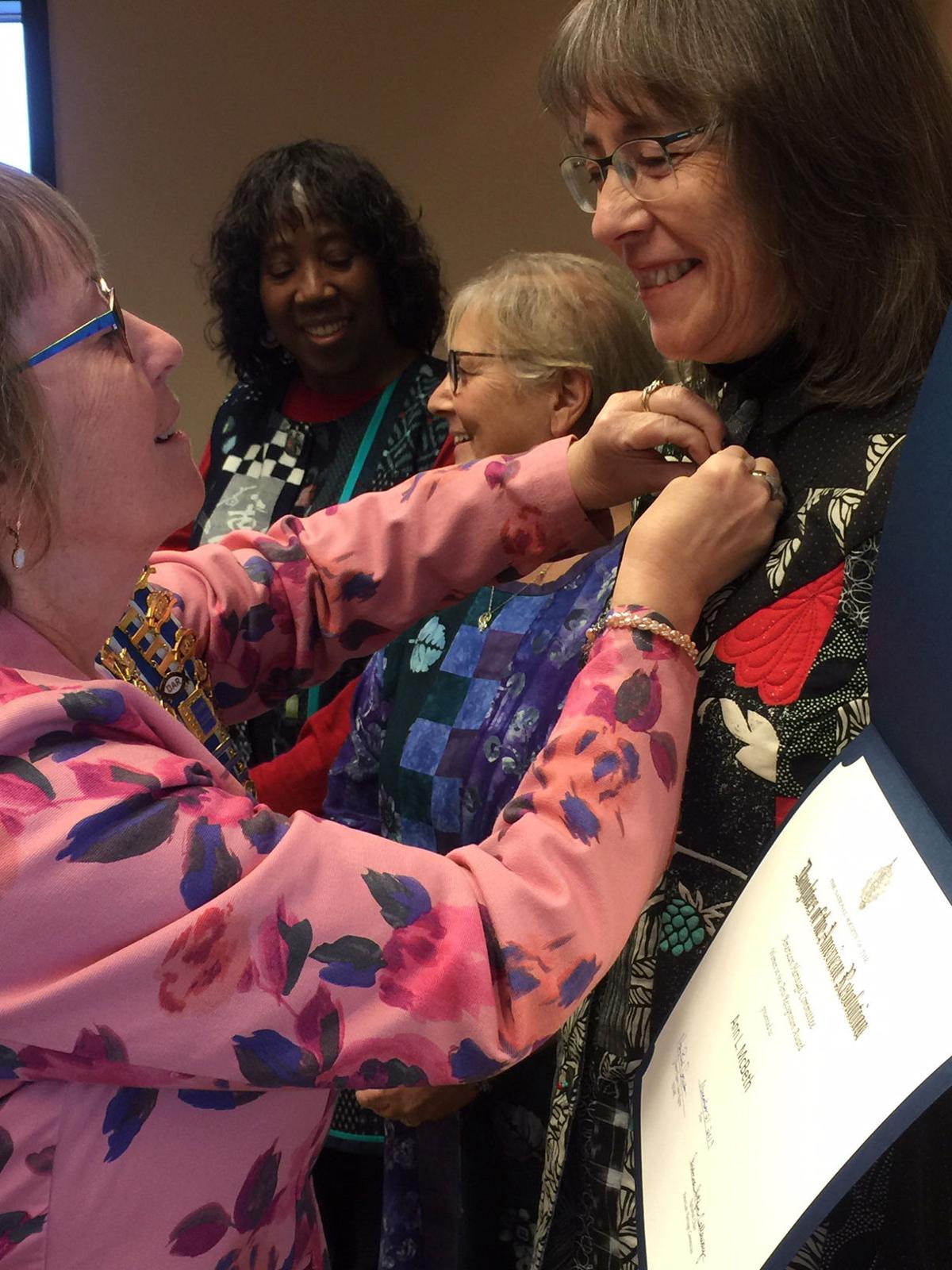 Susan Malen of the Alaska Chapter/Daughters of the American Revolution adds a commemorative pin to the lapels of Ann McBeth and her artistic colleagues, all winners of Women in the Arts Recognition Awards.

Award winners include, from left, Corlis Taylor, Gayle Hazen, Ann McBeth and Julie Scott (who is not pictured).

Each award winner received a special certificate and a pin.

Susan Malen of the Alaska Chapter/Daughters of the American Revolution adds a commemorative pin to the lapels of Ann McBeth and her artistic colleagues, all winners of Women in the Arts Recognition Awards.

Four talented local fiber artists were honored recently with Women in the Arts Recognition awards, by the Alaska Chapter of The National Society of the Daughters of the American Revolution.

The fiber artists are Gayle Hazen, Ann McBeth, Julie Scott and Corlis Taylor. Julie Scott was unable to attend the ceremony. The other three artists gathered to accept special recognition for outstanding achievement. Here’s a short introduction to each of the artists.

“My first foray into ‘wearable art’ was making mermaid outfits for my Barbie doll when I was a kid in California,” Hazen said. “I never imagined it would  lead to a lifetime of sewing clothes for myself, my family and my community.”

With four brothers, she never had any hand-me-downs, so learning to make her own clothes was the frugal thing to do.

When she moved to Fairbanks in 1975, she also learned how to weave, embroider, spin, dye, knit and crochet. She helped make costumes for theatrical productions and then opened Log Cabin Fibers. In 1991, with others, she opened Hands All Around, a quilting and weaving store. She and Scott wanted to explore garments combined with quilting techniques, and that pursuit became the “Garment Groupies,” later revised to The Radical Alaskan Garment Society or RAGS.

“We are going on 30 years of sharing our love of garment and quilt making,” she said.

She currently shares a studio with Corlis Taylor and is working on items for the Farmer’s Market Holiday Bazaar and for the Pacific International Quilt Festival Fashion show in 2020.

McBeth started sewing when she was required to take a home economics class in junior high school. She soon started making many of her own clothes.

“As my mother says, ‘Otherwise you would have been wearing rags to school,’” she recalled.

When she moved to Fairbanks in 1979, she worked in a tailor shop and then became the tailor for the Fairbanks Nordstrom store. She was inspired by quilts at the Tanana Valley Fair and started quilting, as well as incorporating quilting techniques into her clothing.

Her work has been displayed widely. A joint quilt by McBeth and Susan Malen was accepted into an international traveling exhibit curated by the United States Mission to the United Nations Agencies in Rome — “A World Without Hunger” in 2014 and in Geneva, “Water Is Life” in 2016.

Taylor’s love for wearable art began in her childhood. Her grandmother and mother made all her clothes. She now makes her own wearable art that is one-of-a-kind.

“With wearable art, you’re creating a fabric design and then making a garment with that fabric design,” she said.

She came to Alaska as a VISTA volunteer and spent 12 years in Bethel. As stress relief from helping to develop and operate a domestic violence center, she taught herself how to quilt. Before long she and a friend were teaching quilting through the community college. They even started the quilting guild in Bethel.

In 1991, she and her family moved to Fairbanks. Corlis dove right into the quilting scene and started taking classes. That first summer, she found her calling — wearable art. Newly retired, she now devotes her time to creating wearable art and sharing it.

“My garment-making journey began in 4H in Fairbanks in the 1960s,” Scott said. “Then with the bicentennial, my interests turned to quilting.”

She helped form the Cabin Fever Quilters Guild in 1979 and began making vests and jackets.

“These basically looked like I was wearing a quilt,” she said.

Then, she and Hazen formed “Garment Groupies” for people interested in creating quilted garments. Along the way, they invited guest speakers and learned how to make those garments flattering. They started manipulating fabric too and sought out new fabrics, like African hand-dyed fabric and Japanese kimono fabric.

She and her colleagues have displayed their creations at numerous shows. They have also traveled to quilt shows and fiber arts conferences, exhibiting and doing demonstrations.

“We find fabrics, vintage buttons and interesting embellishments in our travels, which we share with each other,” she added.