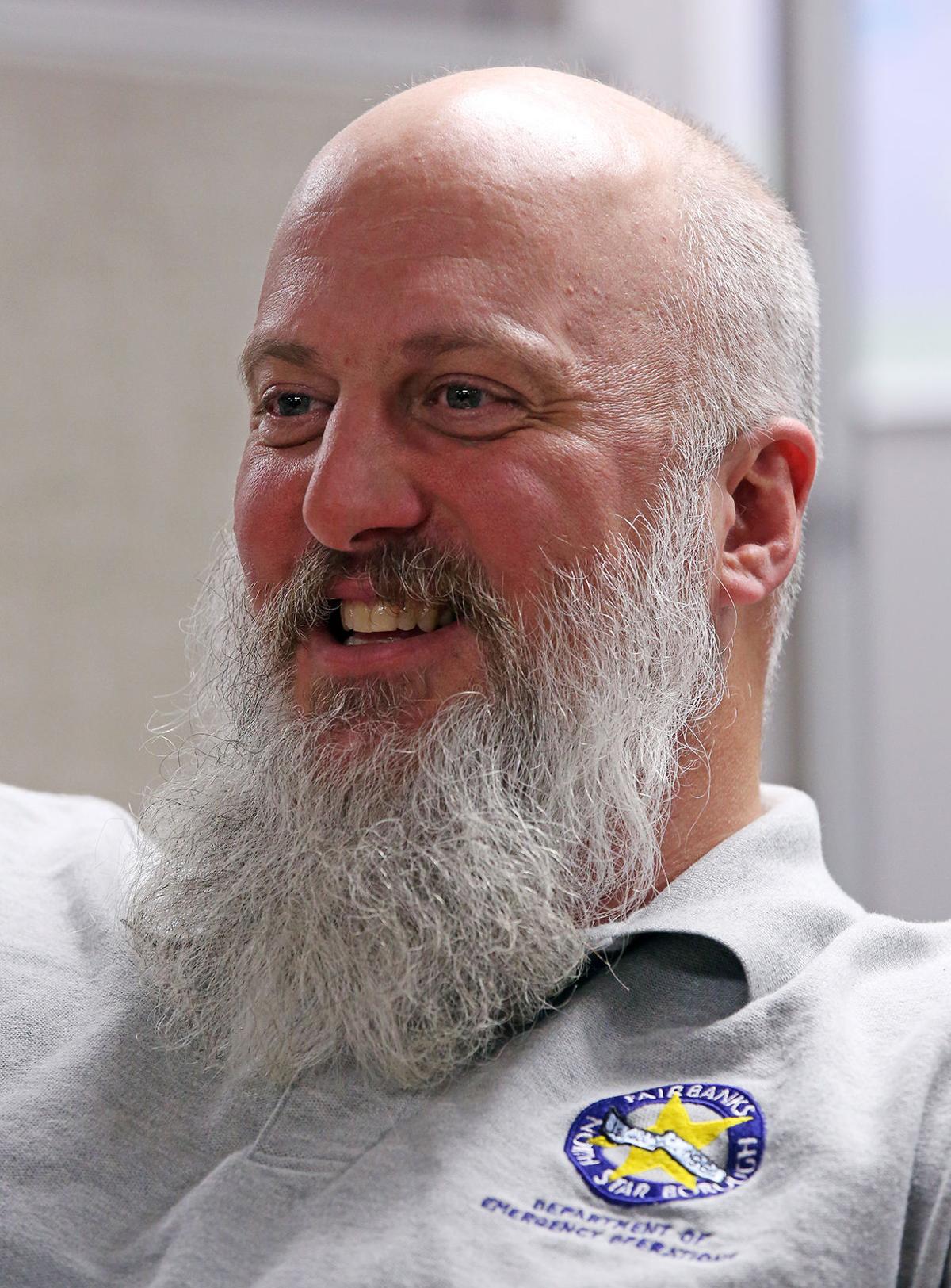 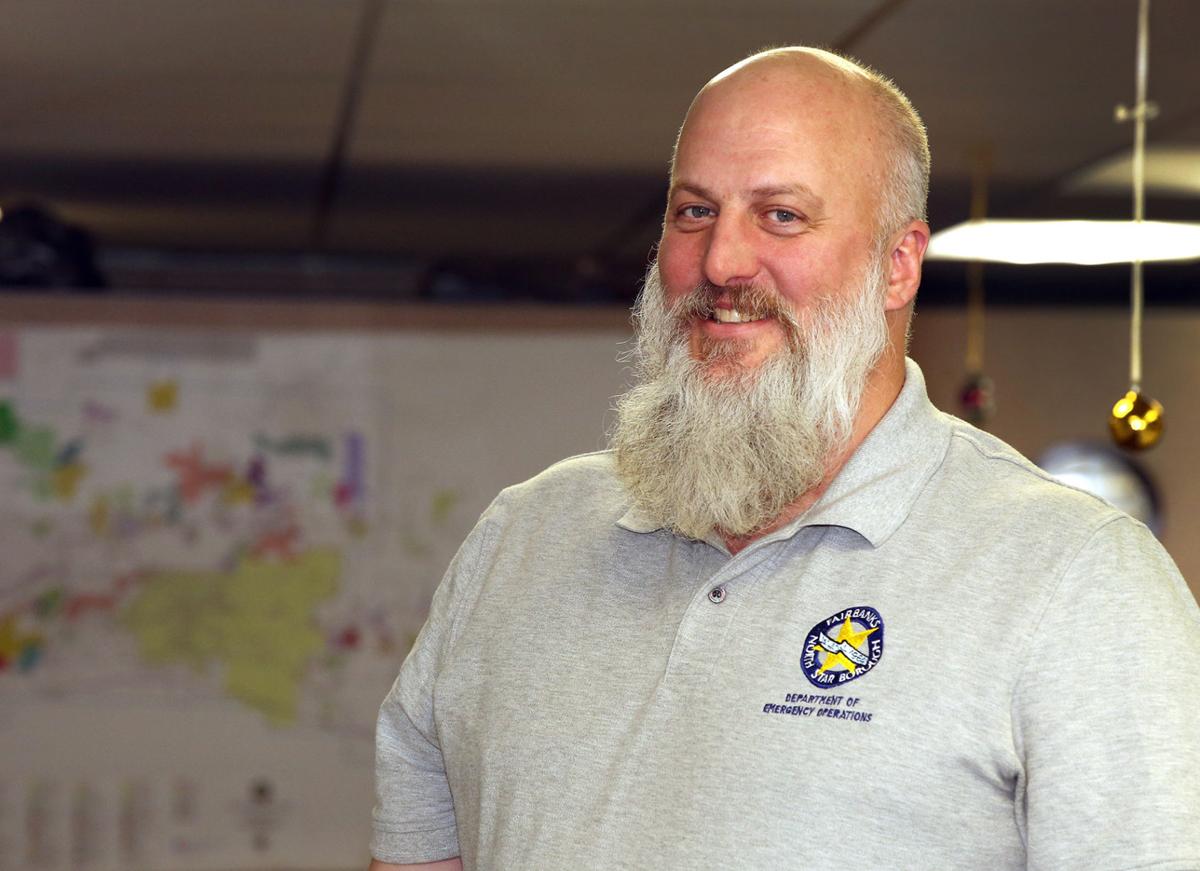 FAIRBANKS — Many Fairbanksans wonder what it would be like if Fairbanks were hit by an earthquake like the one that hit Anchorage last month. Baird Stiefel’s job as the borough emergency manager is to do more than wonder.

Months before the Anchorage quake, Stiefel asked the state seismologist to create a model of an earthquake here, to show the vulnerability of public facilities in the borough. The model was based on a 7.0 earthquake, the size that is reasonable to prepare for here. It’s also the size of the quake Anchorage just experienced.

“It’s very plausible we could have a 7.0-ish earthquake here, and it could cause widespread damage,” Stiefel said.

The extent of the damage would vary widely based on specifics, he said. Charting possible earthquakes over a map helps emergency managers, such as Stiefel, plan.

Stiefel is an imposing man, even on one of his first days back at the office last week after undergoing neck surgery. He’s 48, 6-foot-5 and powerfully built. His career in emergency management has taken him to help provide humanitarian aid some of the worst disasters in the past decade, including the 2013 Typhoon Haiyan in the Philippines and the 2015 Nepal earthquake.

Fairbanks has plenty of vulnerabilities to disasters including earthquakes, wildfires and floods.

But Stiefel said the community also has many of the tools necessary to handle the crisis and rebuild when the next big disaster arrives.

Part of that is the independence and know-how that many Alaskans are associated with and take pride in, things such as having generators, outdoor gear and the skills to use these tools.

But a lot of what makes a community resilient — people’s interdependence and ability to work together — goes against the stereotype of Alaskan independence. Stiefel sees signs of this community connection through institutions such as the United Way and the Fairbanks Community Food Bank. The resources of the military bases around Fairbanks also give us an edge in responding to disasters, he said.

“Do you trust your neighbors, do you talk to them? If you look at a long-term recovery studies, they used to say it was whether you had money or not. But really, the quality of your relationships with the people around you are going to determine your success post-disaster,” Stiefel said.

Stiefel’s emergency preparedness work started with training to respond to chemical, biological and nuclear attacks. Originally from Tok, he moved with his family to Minnesota his senior year in high school and joined the Army National Guard.

Stiefel spent 24 years in the military, half as an Army medic and half in the Air Force, where he studied and worked in emergency preparedness.

In the years after the 9/11 terror attacks, lots of interest existed in emergency preparedness in the military, especially in preparation for facing weapons of mass destruction. Stiefel advanced through the ranks to what he described as his last and favorite job in the military: a senior enlisted position as the superintendent of the 36th Contingency Response group at Andersen Air Force Base in Guam.

Through that job, he traveled to disaster zones around the world, helping deliver millions of pounds of emergency supplies and solving the logistical problems of unloading the huge cargoes at under-equipped and sometimes disaster-damaged airports.

After retiring from the military in 2016, Stiefel applied for the Fairbanks emergency manager job because he was interested in living in Alaska again. He likes the winters here and enjoys skiing and fatbiking. He lives in Fairbanks with his wife and one of his two adult sons.

Stiefel works at a Fairbanks North Star Borough office attached to the borough bus depot on Peger Road. The three-employee crew works to prepare the borough for emergencies by anticipating how disasters would affect people and critical infrastructure. They also coordinate training to make people better equipped for emergencies. For example, a free class Stiefel helped bring to the Cold Climate Housing Research Center in Fairbanks this week teaches homeowners how to evaluate how their homes would respond to an earthquake and how they can improve it.

Fairbanks’ history has been filled with fires, floods, earthquakes and large airplane crashes. Disasters are unpredictable. They occur sometimes back-to-back and sometimes with years between them. The borough emergency management division keeps a list of past disasters at bit.ly/2B0M0yo. The most recent was the 2013 winter storm that left thousands without power and heat. The same year, the Stuart Creek 2 fire forced the evacuation of hundreds of people, sled dogs and other animals in Two Rivers.

There haven’t been any major disasters since Stiefel started as emergency manager. He tries to keep himself and the community ready.

“We still have the potential for bad things to happen. We’ve had a pretty long break. I can’t say it’ll happen tomorrow. It might take 10 years,” he said. “You have to hope for the best and prepare for the rest.”

Correction: This article has been changed to reflect the following correction.