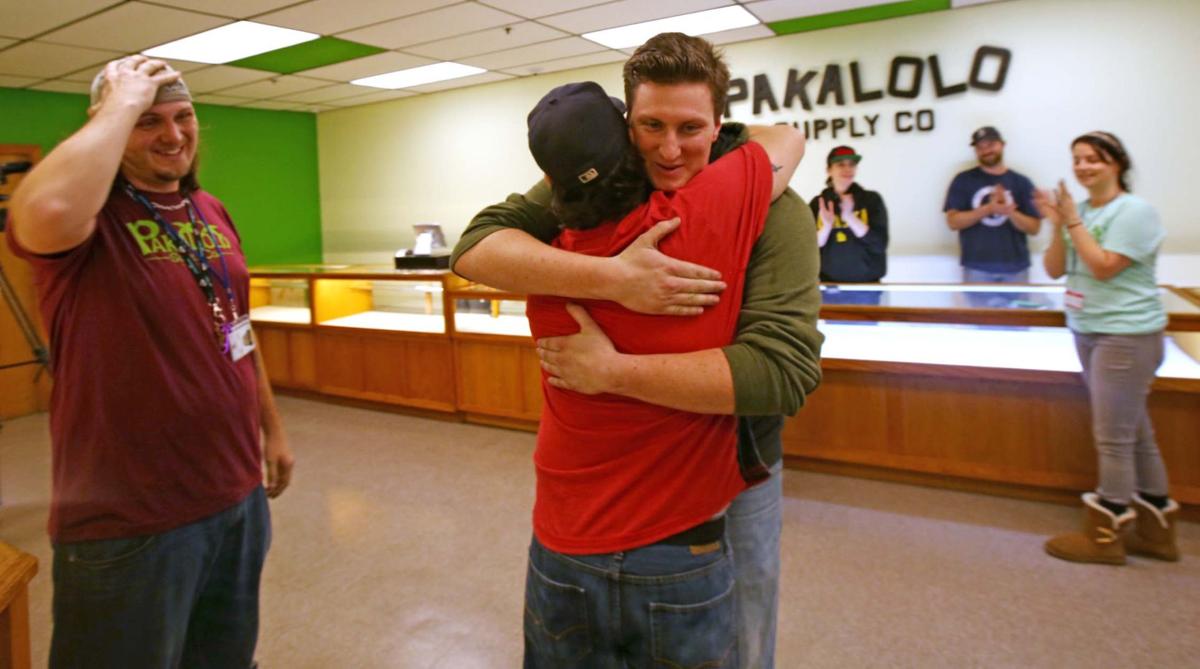 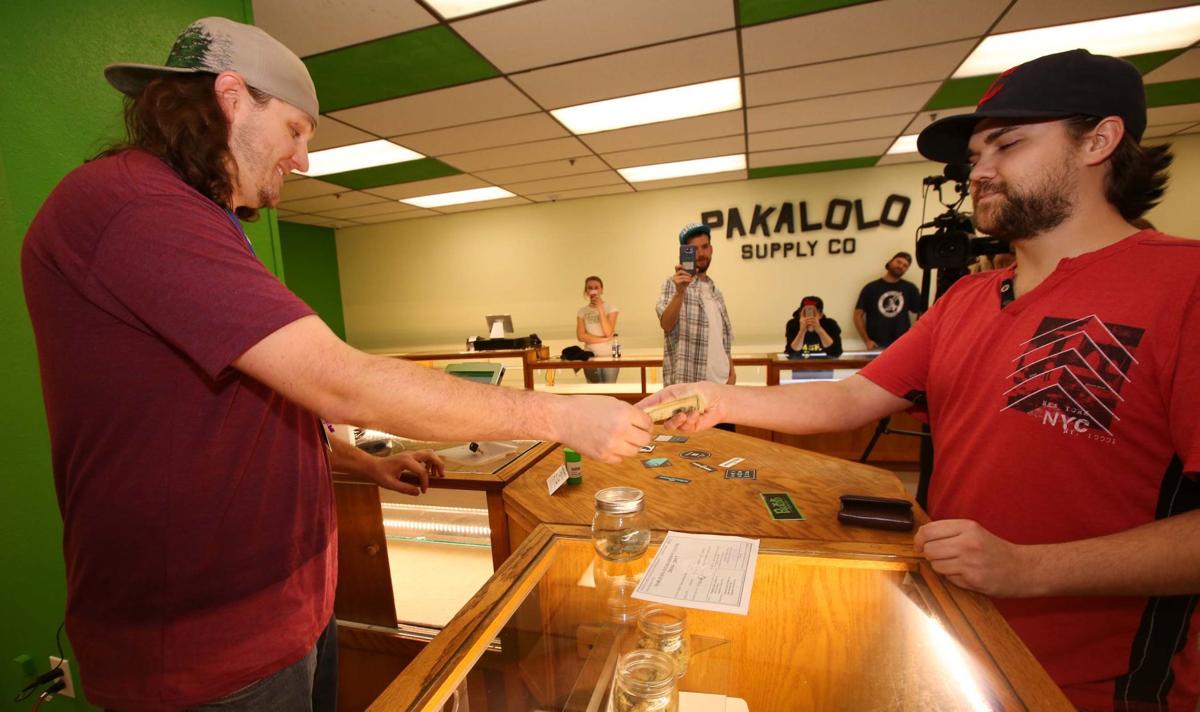 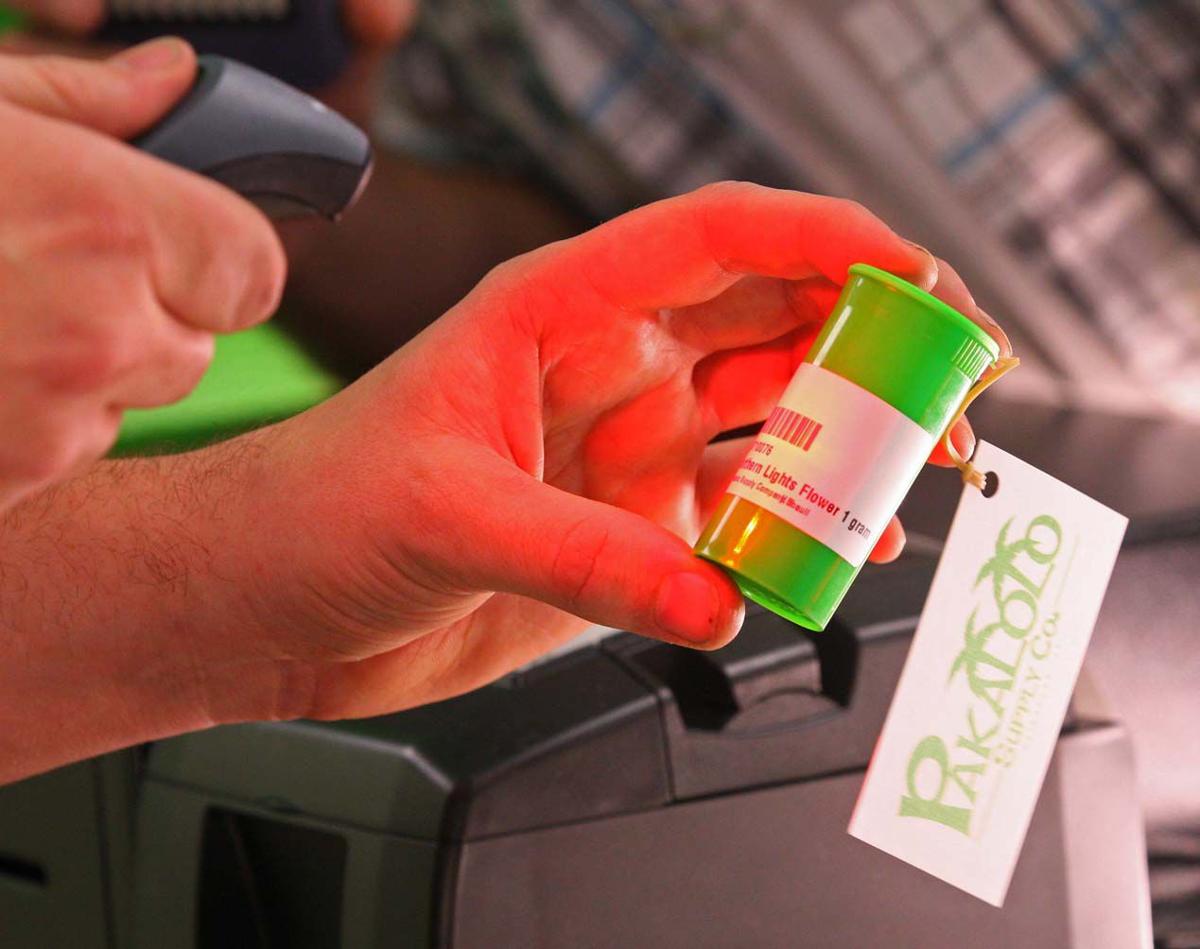 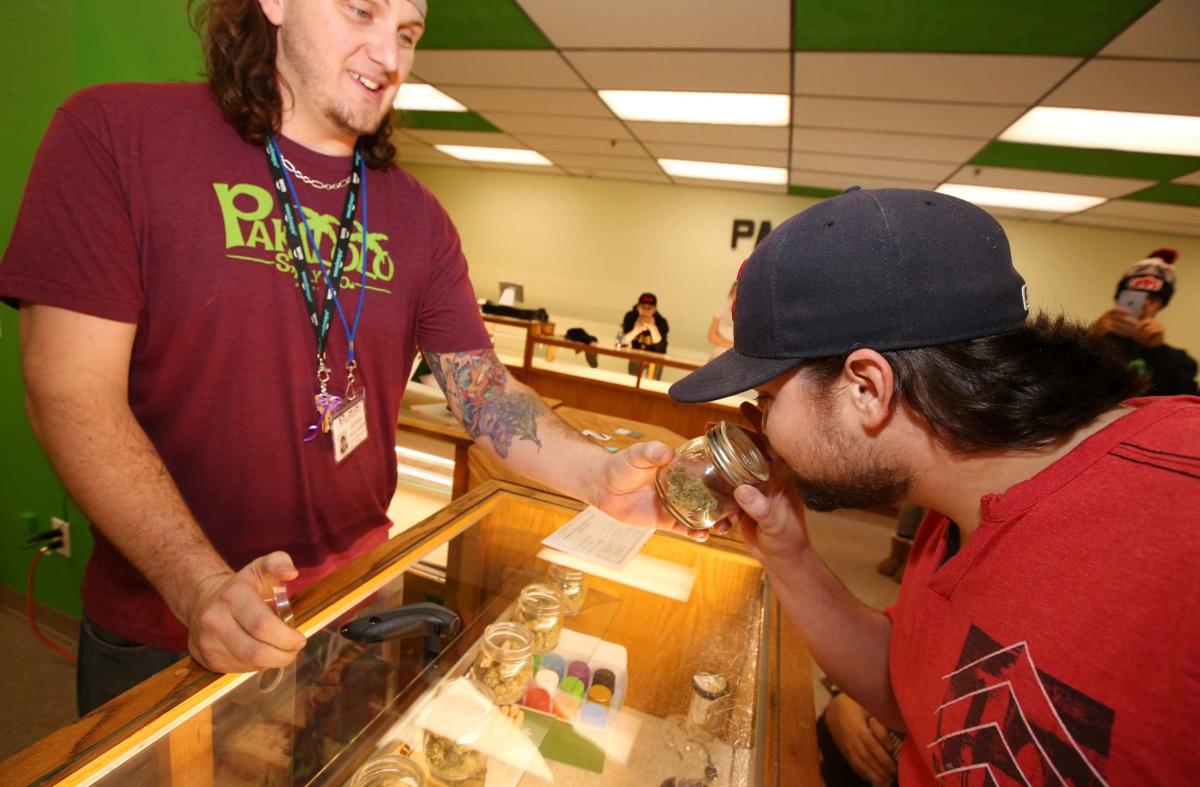 Mike Pokrivnak, right, a cancer survivor, smells a sample of Northern Lights marijuana displayed by Keenan Hollister, left, before purchasing a gram of the bud as the first legal retail sale of marijuana in Alaska occurs at Pakalolo Supply Co. Friday evening, October 28, 2016.

Mike Pokrivnak, right, a cancer survivor, smells a sample of Northern Lights marijuana displayed by Keenan Hollister, left, before purchasing a gram of the bud as the first legal retail sale of marijuana in Alaska occurs at Pakalolo Supply Co. Friday evening, October 28, 2016.

FAIRBANKS — A 29-year-old cancer survivor became the first person legally to buy commercial marijuana in Alaska on Friday after paying $21 for a gram of “Northern Lights” at Pakalolo Supply Co. in Fairbanks.

The pot grower/retailer passed its final inspection that afternoon and made the sale at about 5:25 p.m.

“We asked if we were legal to go today for a ceremonial sale and (the inspector) said, ‘Absolutely, you are 100 percent legal.’ The first in the state,” Cole Hollister, who owns the business with sons Keenan and Tyler, said at the store’s brightly lit retail space Friday evening.

Pakalolo announced Monday that it planned to open next week, but the Hollisters hoped the inspection process would go faster than expected so they could beat a Valdez-based pot retailer for the first sale.

“It’s pretty amazing. Everything passed with flying colors. We were given our license for the store and also given permission to transfer product from our cultivation company next door to our retail store. That’s a huge deal,” Cole said, noting that a retail pot store typically would have to be inspected twice — once to get its license and then a second time after the product has been transfered in.

“In our case, because we’re right next door, she was able to inspect our operation with the product and go ahead and sign off on us at one time,” Cole said.

A small crowd of employees watched as Keenan Hollister rang up the transaction after asking longtime friend and first customer Mike Pokrivnak for his identification to confirm he was older than 21 years of age.

Pokrivnak said drinking marijuana teas while undergoing treatment for acute myeloid leukemia in Seattle — where marijuana has been legal since 2012 — was a “great alternative to painkillers.”

“For nausea and pain it was the best thing, and also it’s an appetite inducer. It was phenomenal,” Pokrivnak said.

Pokrivnak said he prefers marijuana to opioid painkillers, which are highly addictive and have other unpleasant side effects.

Pakalolo Supply Co. plans to have four to six strains of marijuana for sale when it officially opens for business Wednesday. The Hollisters expect to have about eight to 15 available when they harvest their latest crop in the next week to 10 days, Cole Hollister said.

Pre-rolled joints will range in size from 1/2 a gram to 1 gram and will be priced from $15 to $30, depending on size and potency. Packaged marijuana will range in price from $17 to $22 a gram.

The store plans to offer edible marijuana products — which are much more potent than smoked marijuana — as they are made available to them by suppliers.

“We’ve already been training our bud tenders that they have to caution new users to take it slow, especially when we have the edibles,” Cold said. “We’re going to be especially emphatic on that.”