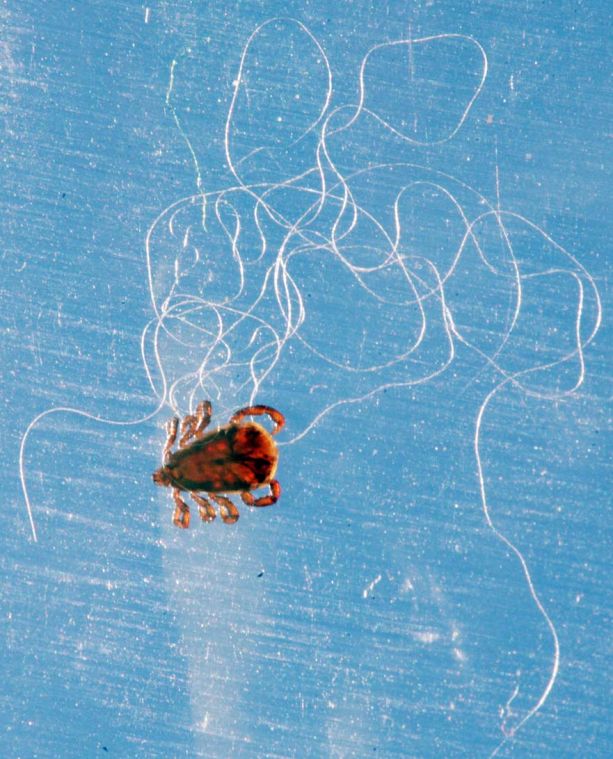 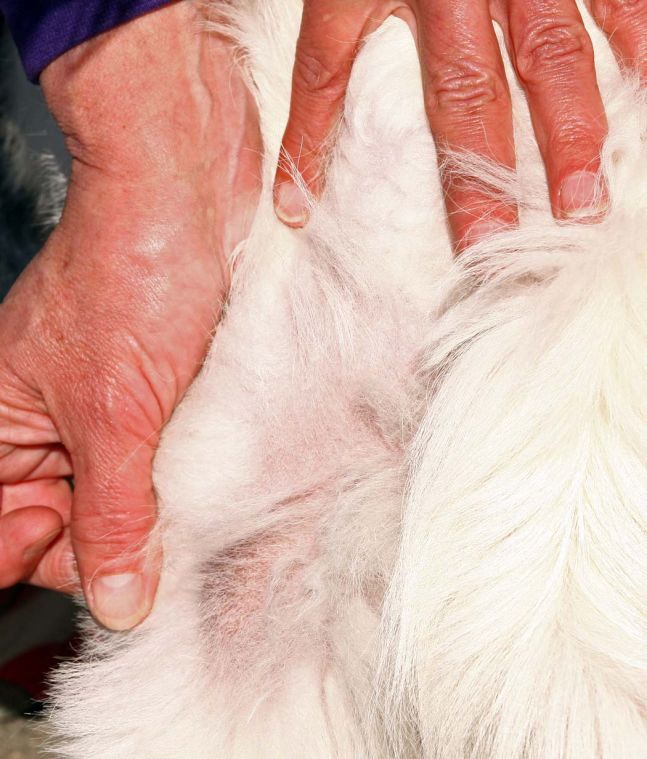 FAIRBANKS – When Linda Roberts told friends she was bitten by a tick while sleeping two years ago, they thought she was crazy. Everybody knows there aren’t any ticks in Alaska, they told her.

When Roberts discovered a tick on her dog this week while giving it a bath, she felt vindicated. Disgusted, but vindicated.

Roberts plucked the parasite off her dog, a little, white, fluffy American Eskimo named Angel, and put it in a Ziploc bag. The next day, she took it to Mt. McKinley Animal Hospital, where veterinarian Dr. Ben Kuhn confirmed that it was indeed a tick.

“He was very surprised,” Roberts said of Kuhn’s reaction. “He’s been here for two years and hasn’t seen any sign of ticks.”

Next, Roberts brought the tick in a baggie to the News-Miner.

“This is news,” Roberts said, holding up a small Ziploc baggie with the tick, still alive, inside. “... I want to warn people what can happen to their pets.”

Finally, Roberts took the tick to the Alaska Department of Fish and Game office on College Road and showed it to veterinarian Dr. Kimberlee Beckmen.

The discovery wasn’t news to Beckmen, though. The sole veterinarian for ADFG, Beckmen is well aware there are ticks in Alaska and there always have been. Ticks on small mammals like snowshoe hares, squirrels, lemmings, voles and birds are endemic to Alaska, she said.

“I’ve been working for the department for 12 years, and from day one, I’ve had ticks coming in,” Beckmen said. “We’ve always had ticks on wildlife.”

As it turned out, Beckmen identified the tick Roberts plucked from her dog as haemahysalis leporispalustris, otherwise known as the common rabbit tick, or as it’s called in Alaska where there are no rabbits, the hare tick. It is one of only two ticks, the other being the squirrel tick, that is native to Alaska.

Hare ticks are commonly found on snowshoe hares in the spring and can carry a flu-like disease called tularemia, which can be spread to dogs, cats and even humans via a scratch or saliva. Pretty much every spring, a handful of dogs and cats around Fairbanks are infected with tularemia as a result of picking up or sniffing a snowshoe hare that’s infected, Beckmen said.

While hare ticks prefer snowshoe hares as hosts, it’s not uncommon to find them on dogs or cats. Squirrel ticks are even more common on pets in Alaska, Beckmen said.

“If a hungry tick can’t find a hare or a squirrel to get on and a dog or cat comes by, it’s going to suck on whatever mammal it can get a hold of,” she said.

In the past three years, Beckmen has found at least two other types of ticks that have taken up residence in the Last Frontier and appear to be here to stay: the American dog tick and brown dog tick. Both ticks have been found on dogs or cats that have never left the state, a sign the parasitic arachnids can — and are — surviving in Alaska.

That’s bad news for pet owners. Ticks can and do carry and transmit diseases from animals to humans. The most common are tularemia, Lyme disease, Q fever and Rocky Mountain Spotted Fever. Currently, only tularemia and Q Fever are present in Alaska.

Wildlife disease specialists also say the establishment of new ticks in Alaska poses a risk to all sorts of wildlife, from caribou to coyote to fox to moose to Sitka black-tailed deer to wolves.

“It is a big concern because the populations of animals up here haven’t been exposed to these tick-borne diseases,” said Dr. Robert Gerlach, the state’s head veterinarian. “If we get a tick that comes up and now can survive in this environment, we can get disease spread in a wildlife or the human population we’re not used to, which could have drastic results.

“Once you get a tick population started in a wildlife species, they continually spread disease through that wildlife population,” he said.

The two dog tick species found in Alaska were discovered as a result of a recent enhanced tick surveillance program by ADFG to look for moose winter tick, a serious threat to moose that has been found in the Yukon Territory. Using public service announcements and interdepartmental communication, Beckmen put word out to the public and to wildlife biologists around the state three years ago that she was looking for ticks.

As a result, between June 2011 and October 2013 Beckmen collected 89 ticks representing 48 separate infestations. The ticks came mostly from dogs, but also humans, cats, hares and marten.

While no moose ticks were found, there were 10 cases of American dog ticks and 13 cases of brown dog ticks discovered on dogs or humans around the state, including Anchorage, Denali Park, Fairbanks, Juneau, Sitka, Valdez and Willow. One of the infestations involved a boarding kennel in Fairbanks — Beckmen declined to name it — that was, and still is, infested with brown dog ticks, which are the only tick in North America that lives in indoors and are especially hard to eradicate, Beckmen said. Other cases involved houses that were infested with brown ticks.

“We had one dog a person brought in that had 70 or 80 ticks,” she said. “The house is infested. There are ticks all over the pets and kids.”

It’s just a matter of time and climate change before those ticks, and possibly others, gain a leg-hold in Alaska, Beckmen said.

“All they have to do is have somebody drop a pregnant tick,” she said. “It will happen, but right now, we don’t have any evidence those are established because I don’t have proof of transmission.”

The results of ADFG’s heightened surveillance program prompted Beckmen to ramp up her efforts to make Alaskans aware that there really are ticks in Alaska and they have the potential to cause serious problems, as well as alert human health practitioners to consider previously unreported tick-borne diseases in their diagnoses.

The tick that Roberts brought her was the third tick Beckmen had seen in the past two weeks. The other two were a brown dog tick that came from a dog in Soldotna and a squirrel tick that was found on a marten that was trapped near Petersburg.

The thing that has Beckmen scratching her head is why the myth that there are no ticks in Alaska continues to persist, despite her best efforts to eradicate that misconception.

About a year and a half ago, she and Dr. Robert Gerlach, the state veterinarian, sent a letter to Alaska vets informing them of her preliminary findings and advising them to consider tick-borne diseases in diagnostic tests. She has sent dozens of emails and presented the information to various groups, including vets. Just last weekend, she put on a two-hour workshop on ticks at the Alaska Canine Training Center in North Pole. Yet, at least one local vet she has spoken to still is telling people there are no ticks in Alaska, Beckmen said.

“Everybody needs to stop being in denial,” Beckmen said. “Ticks are spreading north. There is transmission going on in Alaska.”

Beckmen rattled off a list of diseases that could be introduced in Alaska as a result of ticks. They included Lyme disease, Rocky Mountain spotted fever, canine ehrlichiosis, canine babesiosis, anaplasmosis, tick paralysis and tick fever.

“They can spread diseases we haven’t seen before,” she said.

Gerlach said he and Beckmen are “probably on the edge of being overly concerned” about the establishment of new tick species in Alaska, but “it’s something you should expect to see.”

Anyone who finds a tick on their pet or person, should have it removed and report it to ADFG or the state veterinarian’s office. Ticks can be removed with a pair of tweezers. Before you squish it with your fingers, though, be advised that the fluids released from an infected tick can be contagious so you’ll want to wear rubber gloves.

Here is a list of six ticks that were found and identified on dogs, cats, humans, and even a marten, in Alaska between 2011-2013.

• Brown dog tick — 13 cases in dogs and humans in Anchorage, Fairbanks and Sitka.

• Raccoon tick — 1 case in a marten near Ketchikan.