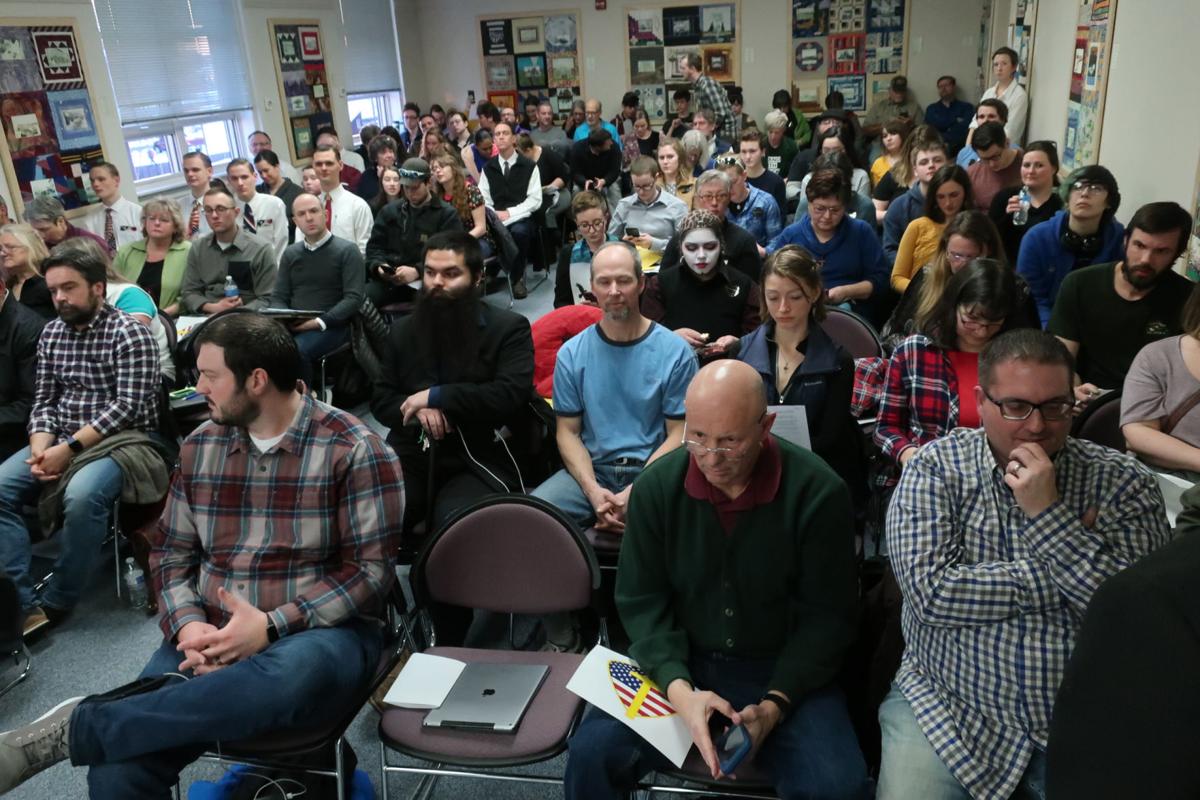 With a limit of 103 people, the council chambers quickly reached capacity on Monday night while the council heard testimony, debated and amended an ordinance creating equal-rights protections for LGBTQ individuals. Those not able to enter the chambers filled hallways throughout City Hall and listened to a live stream of the proceedings. Feb. 25, 2019. 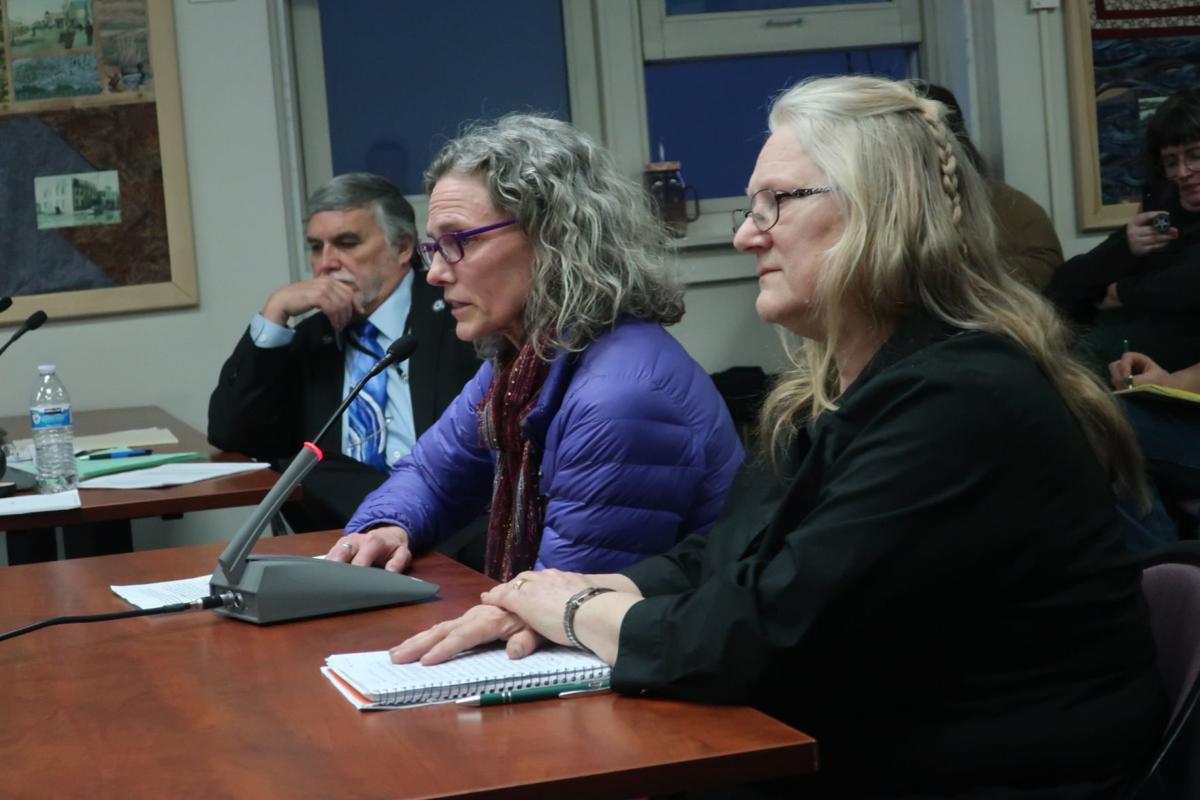 Caroline Brown, center, gives public testimony on Ordinance 6093 at the Fairbanks City Council Meeting on Monday night. About 35 people provided comments over two hours, with a slight majority of people opposing the ordinance. Brown was not one of the majority, and urged the council to adopt the ordinance. Feb. 25, 2019.

With a limit of 103 people, the council chambers quickly reached capacity on Monday night while the council heard testimony, debated and amended an ordinance creating equal-rights protections for LGBTQ individuals. Those not able to enter the chambers filled hallways throughout City Hall and listened to a live stream of the proceedings. Feb. 25, 2019.

Caroline Brown, center, gives public testimony on Ordinance 6093 at the Fairbanks City Council Meeting on Monday night. About 35 people provided comments over two hours, with a slight majority of people opposing the ordinance. Brown was not one of the majority, and urged the council to adopt the ordinance. Feb. 25, 2019.

The ordinance creates eight sections of Fairbanks General Code that extend equal rights protections to a number of demographics, most notable the LGBTQ community.

Included are protections for employment, housing and public accommodations, as well as a means for potential victims to challenge discriminatory practices in court.

Councilmen Jerry Cleworth and David Pruhs were the dissenting votes. Cleworth said there were a few elements he didn’t fully support, but only one was a deal breaker — an amendment that didn’t get adopted.

The amendment would have required allegedly aggrieved individuals to seek recourse through the Equal Employment Opportunity Commission or the Alaska Human Rights Commission before seeking damages through litigation.

“I think that’s a horrible way to construct a law. … I think we made some good progress tonight on it as a whole, but just going straight to litigation is problematic,” Cleworth said.

Pruhs was opposed for the same reason, as well as a lower employee limit than he would have liked.

“I want respect in this room tonight. I expect there to be calmness and politeness,” he said.

Matherly’s request was heard, and two hours of testimony on the most contentious topic to reach the Fairbanks City Council in recent memory transpired with hardly any outbursts.

Ordinance 6093 has generated so much interest that members of the public arrived at 10:30 a.m. to get on the list for public comment when the sign-up sheet was presented at 5 p.m.

The council chambers almost immediately filled to capacity of 103. People not able to enter filled the hallways on both floors of City Hall, staying through the meeting while listening to a live stream, which at times created a distracting echo within the chamber.

Three extra officers from the Fairbanks Police Department were on hand for crowd control.

Approximately 35 members of the public provided testimony, with a small majority voicing opposition. Then the council got down to business amending and eventually adopting the ordinance.

The first big vote of the night revolved around an amendment proposed by sponsor Councilwoman Kathryn Ottersten, and required Mayor Matherly to break a tie.

Ottersten wanted to remove two possible exemptions of the Federal Fair Housing Act, most notably one informally known as Mrs. Murphy's Exemption. That exemption allows people to deny housing in residences up to a four-plex, if the owner occupies one of the residences.

Alaska does not recognize the exemption, but also has no specific laws providing LGBTQ protections.

Mayor Jim Matherly broke the tie and voted to keep the exemption.

Up next was a dress code. An amendment proposed adding language that states “employers may establish dress code policies that are consistently used for all employees.”

Those in favor of the language said it simply encourages best business practice and could prevent court cases before they happen. Those who objected to the language thought it could be used as a loophole for discrimination.

Again the council tied in a 3-3 vote. Again Matherly broke the tie, this time to add the language.

Ultimately, however, Councilwoman Rogers changed her mind, went through the proceedings to change her vote and the language was not included in the final product.

The next amendment, adding language solidifying religious exemptions, was approved with a 5-1 vote, with Kun dissenting.

Per the ordinance, religious corporations, associations, educational institutions or societies, with respect to the employment of individuals of a particular religion to perform work connected with the carrying on by such groups, are exempt from the legislation.

The amendment also reaffirms federal law by stating “nothing in this section shall abridge any state or federal constitutional protections for freedom of religion.”

One of the biggest topics of the night came toward the end: Determining the maximum number of employees a business can have and still be exempt from the legislation.

Business with four or more employees will not be exempt from the law.

In closing comments, almost all council members thanked everyone for their hard work, and thanked the public for their involvement.

“I think we’ve crafted something that’s not perfect for any of us, but I think will do well for the city,” Ottersten said.

Also on Monday the Daily News-Miner reported that Pruhs had made disparaging remarks toward LGBTQ members claiming to be victims of discrimination, saying they are "full of (expletive)."

Pruhs made the comments at the Interior GOP Luncheon in the back room of Denny's on Friday. Toward the end of Friday’s luncheon, Pruhs did apologize for using the expletive, but followed up saying “at least I can use it here.”
On Monday he fully stood by his statements.

“I stand by every word I said,” Pruhs said in a phone interview Monday morning.