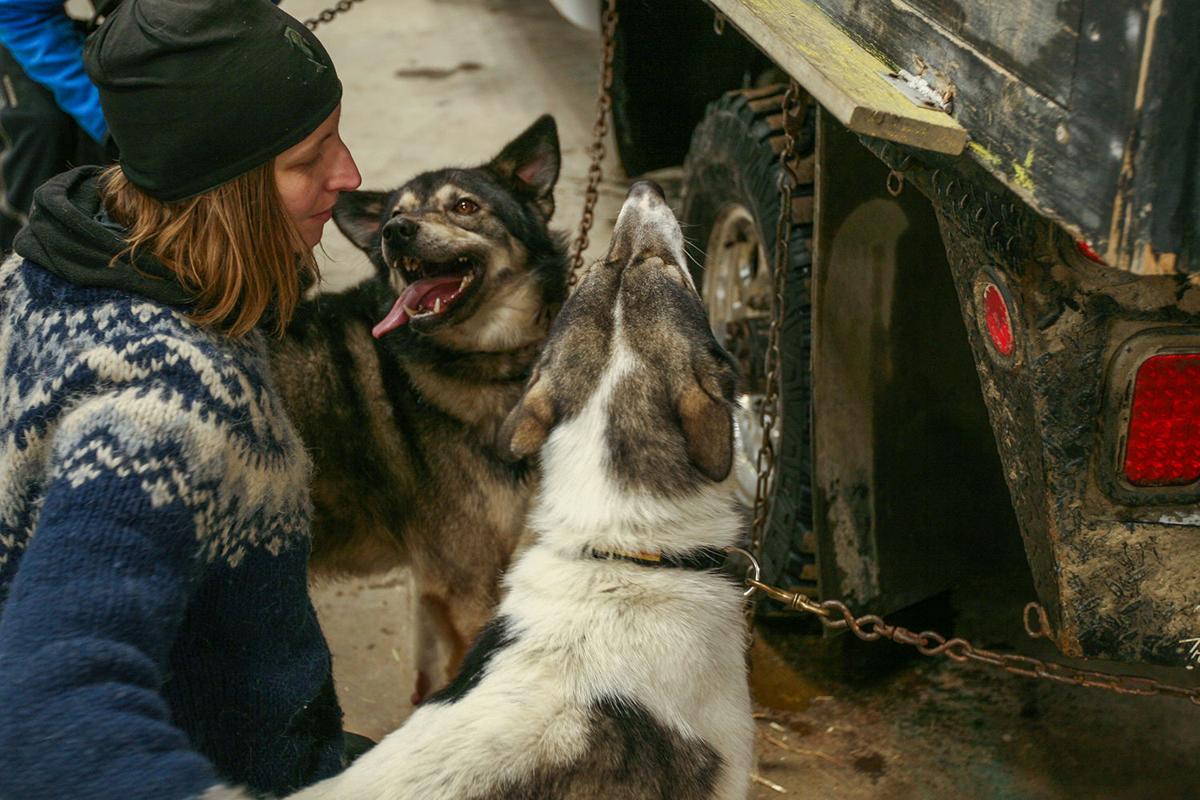 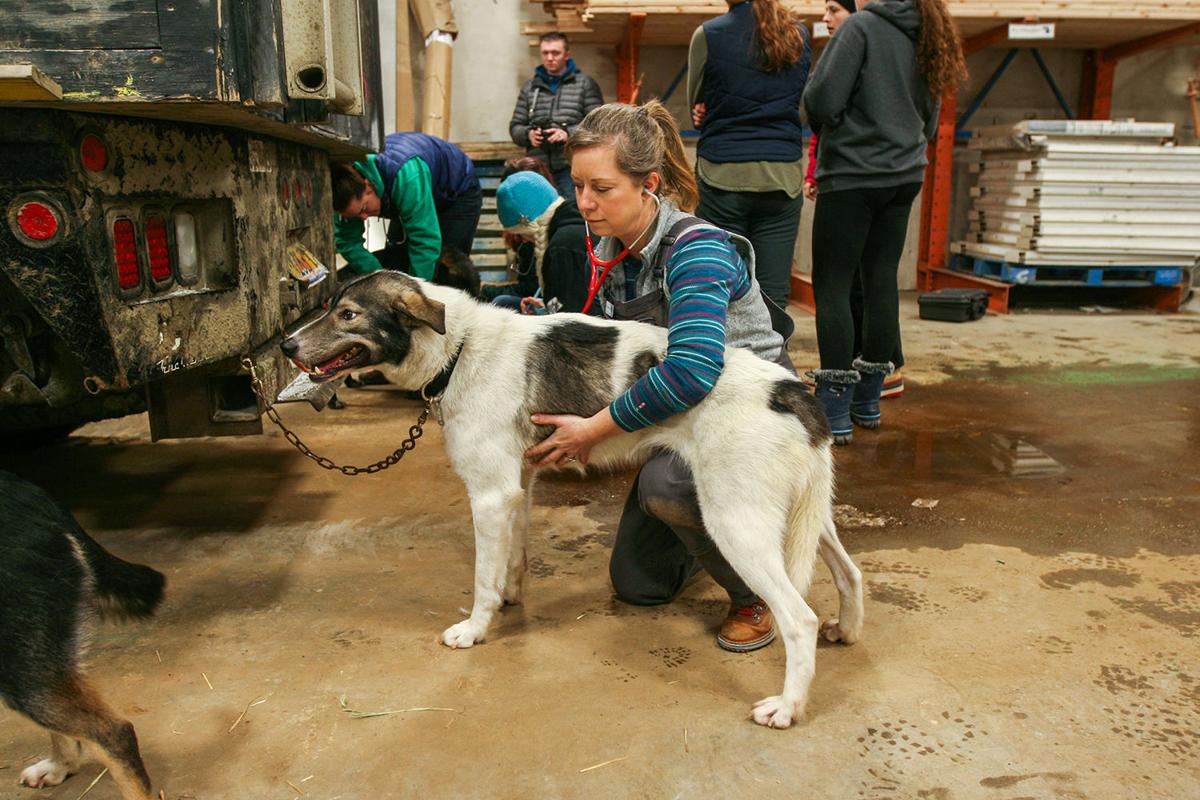 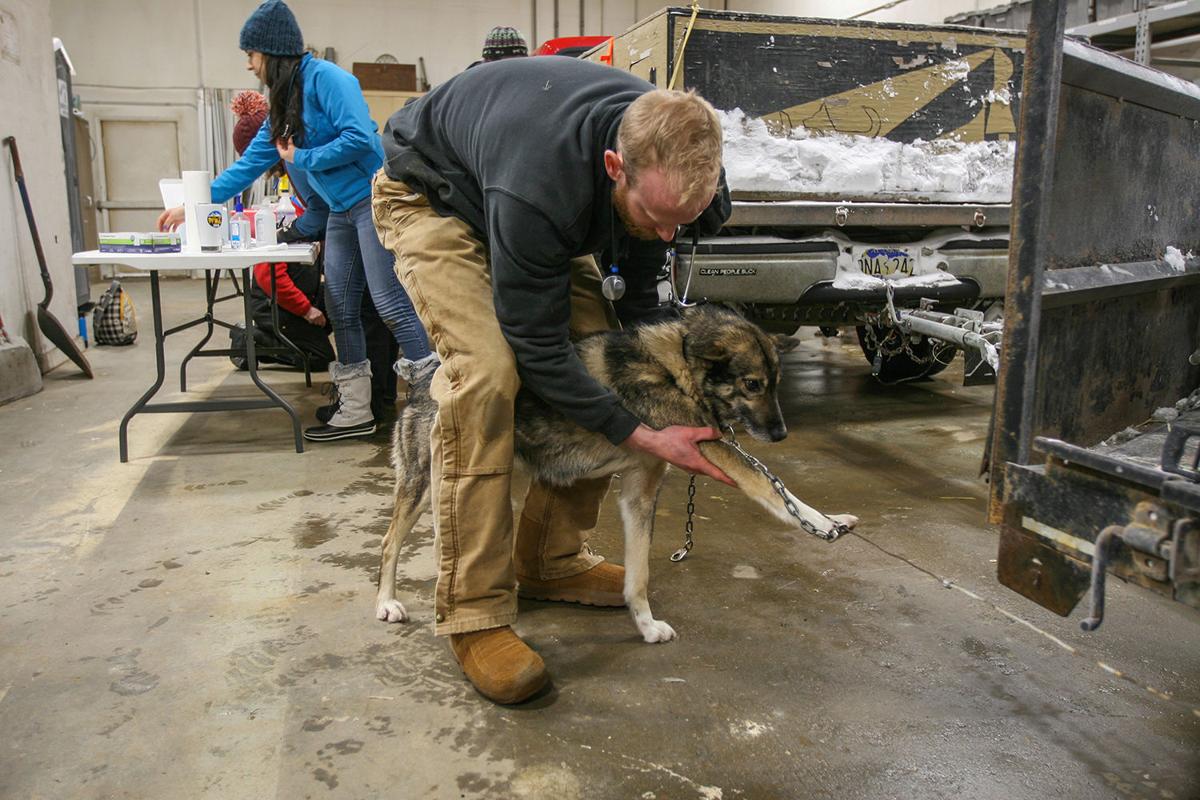 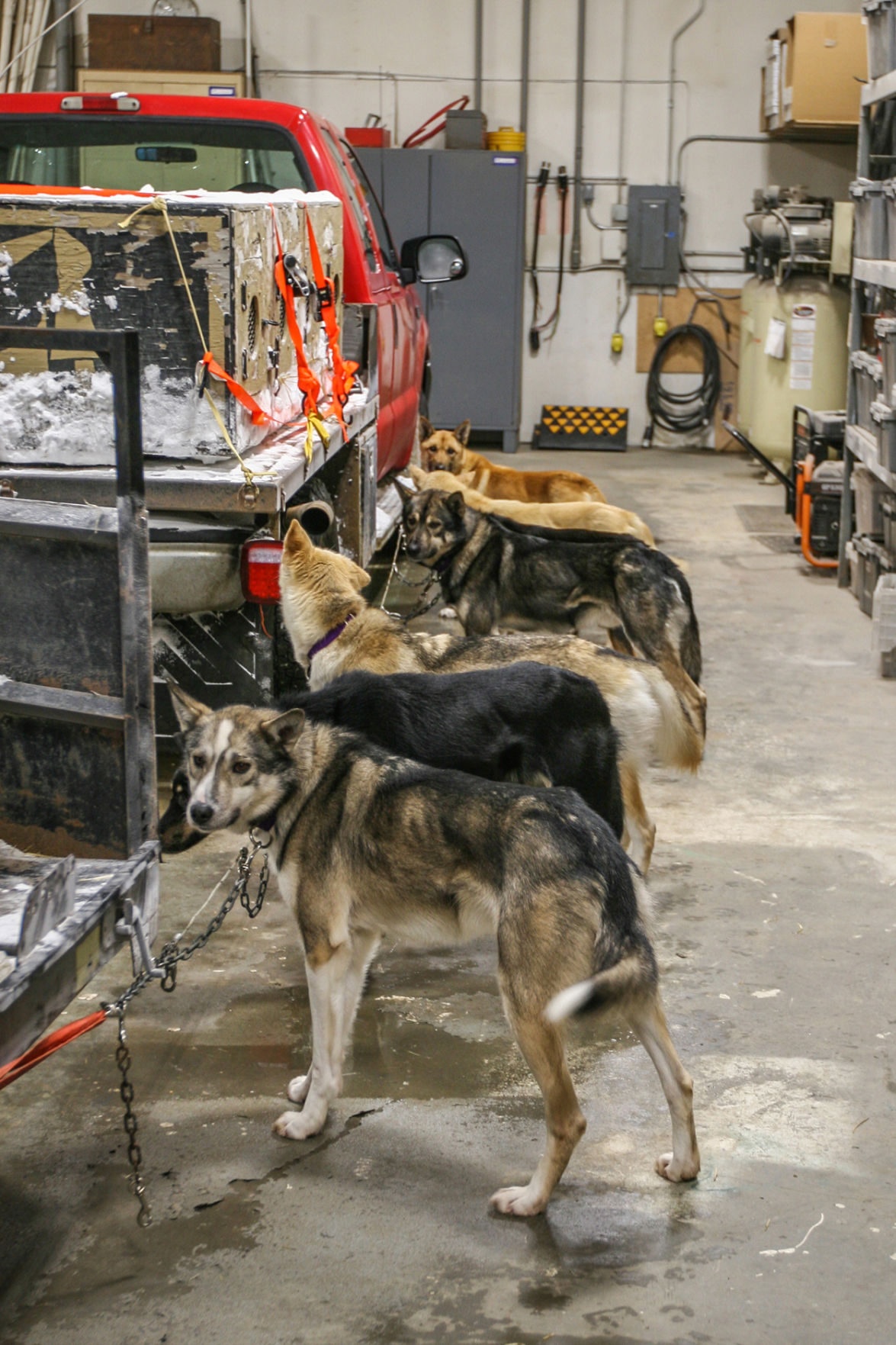 With one week to go before the start of the 2020 Yukon Quest International Sled Dog Race, this year’s sled dogs had their final veterinary check Saturday. And while the veterinary check is a vital part of ensuring the dogs are in good shape for the race from Fairbanks to Whitehorse, it’s also an opportunity for students in the fledgling veterinary medicine program at the University of Alaska Fairbanks to get some hands-on experience.

Nina Hansen, the Yukon Quest’s head veterinarian, is no newcomer — she’s been head vet for the past five years and was a trail vet for five years before that. The vet check is held at Summit Logistics, which lets the Yukon Quest use its shop space for the day. On Saturday morning, prior to the arrival of the first sled dog team, she broke down what the examination involves.

“We do a full physical exam, so we assess their cardiovascular status, their hydration, their bones, joints — we put them through a range of motion — we look at their teeth, their eyes, their ears,” she said.

“The average pet dog is overweight, and none of these are overweight. They’re also super well socialized. I tell people all the time: I’ve been working with sled dogs for 12 years now, and I’ve been bit one time. When I worked in the clinic, every day a dog would try to bite me,” she said. “So it’s nice as a veterinarian, because they’re all healthy.”

This year, the temvperatures are forecast to be a little colder than in recent years. Hansen said this means that the vets are paying closer attention to body condition.

“They tend to lose weight faster, the colder it is,” she said. “When we assess their musculoskeletal system, we pick up every foot and spread the toes apart and take a look. Sometimes, especially if it’s really cold, they get snow and ice buildup in them. That’s why they wear little booties.”

It’s a race and

As Hansen examined the dogs, students watched and occasionally had the chance to take over and conduct parts of the exam themselves. Another well-seasoned veterinarian present was Arleigh Reynolds, who runs the UAF Center for One Health Research. The program, he said, is “a sort of the integration of human health, animal health and the health of the environment.” He explained that the veterinary medicine program is relatively new to UAF. Its first class graduated just last year.

“The vet med program is wonderful for the state of Alaska,” he said. “Before we had this program, if students wanted to be veterinarians, the best advice we could give them would be to leave the state for college: Go to a state that has a vet program, become a resident, do your undergraduate work there, do your vet work there. Then they’re gone eight to 10 years and they’d never come back. Now we have a vet program where students can stay in-state for all but their last two years of training.”

Reynolds said 60% to 70% of the first graduating class came back to work in Alaska. He noted the significance for Alaska of having a program that keeps trained veterinarians in-state.

“The needs here are different,” he said. “We have lots of rural communities that have significant unmet needs in terms of veterinary medicine. There are a lot of parts of the state where rabies is still an issue. There are places in the state where unwanted dog populations cause issues like dog bites on children.

“So we’re helping with public health, as well as the normal day-to-day veterinary work,” he continued.

On Saturday, all 20 of the students on the veterinary program cycled through in small groups at various points throughout the day to participate. Reynolds emphasized the importance of the hands-on experience.

“They get to see and get their hands on these world class athletes and follow them in the race and understand what dog mushing is to our culture,” he said. “It’s kind of a unique thing. There is no other place in the United States where dog mushing is such an embedded part of the culture.”

Reynolds is a seasoned musher himself. He’s competed in the Open North American Championship and won twice. He noted the extreme athleticism of the dogs, which travel 1,000 miles in sometimes difficult terrain and climate.

“From a physiological point of view, these little 45 to 50 pound dogs are going to burn 11,000 calories a day,” he said. “To put that in perspective for you, that is eight times what a Tour de France cyclist would burn on a per pound bodyweight basis. There isn’t another athlete like that in the entire world.” As it happened, one of the students from the first graduating class of UAF’s veterinary program was also at the Quest vet check. Josh Link, who works at North Pole Veterinary Hospital, was examining dogs and helping students. Originally from Pennsylvania, he was among those graduates who opted to stay in Alaska after graduating the program.

“The exam today is a complete wellness examination. We check to see if they have a good range of motion, their muscles and bones are all in good shape and that they’re ready to run the race,” he said. “Throughout the race, we’ll also be checking these dogs and this gives us a good baseline for all of these guys. If they do have something subtle or small before they race, we can pick it up here.”

While almost every dog examined is “happy, healthy and ready to run,” Link said they occasionally see rubbing injuries from harnesses or other minor wear.

While mushers are only allowed to begin the race with 14 dogs, they are allowed to bring 16 to the veterinary check. According to Ryne Olson, who’s competing in the Yukon Quest for the fifth time, this can be a good opportunity to narrow down your team.

“For the most part the mushers should know everything there is to know about the dogs by the time they bring them here,” Olson said. “But we don’t have stethoscopes or the knowledge that the veterinarians do — so I have had them find things like, ‘Oh, this dog has a heart murmur.’ In that case it was an athletic heart murmur, so it wasn’t anything bad. But it’s really nice to have the vets look over the dogs, so you can have a little more comfort and confidence.”

Olson, who lives in Two Rivers, said that looking after a team of sled dogs is basically like having a full-time job. The final week between the veterinary check and the start of the race, she said, is the most nerve-wracking point of the buildup.

“It just brings the race even closer. And you just want to get on the trail,” she said. “All the preparations, it makes me very anxious. But the second that you hit the trail, all that goes away.”