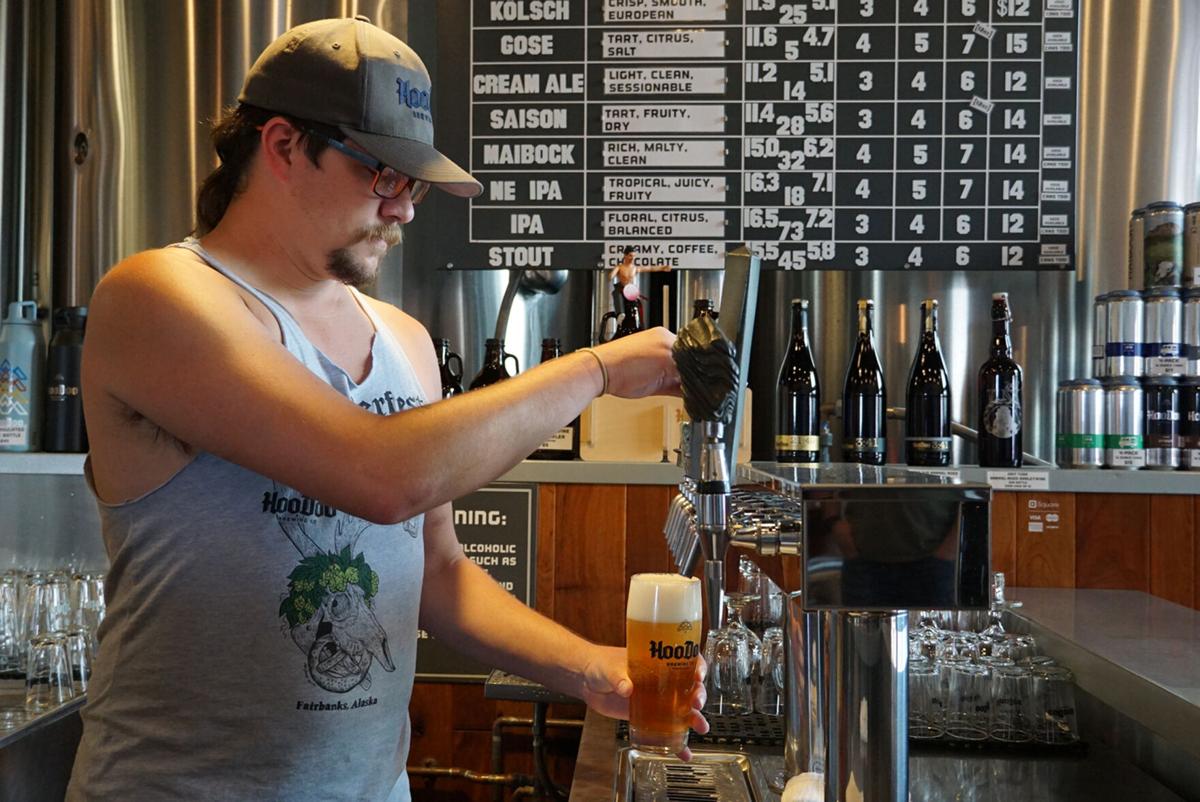 A taproom lead Joh Reber pours beer at at HooDoo Brewing Company on a Friday afternoon, June 4, in Fairbanks, Alaska. 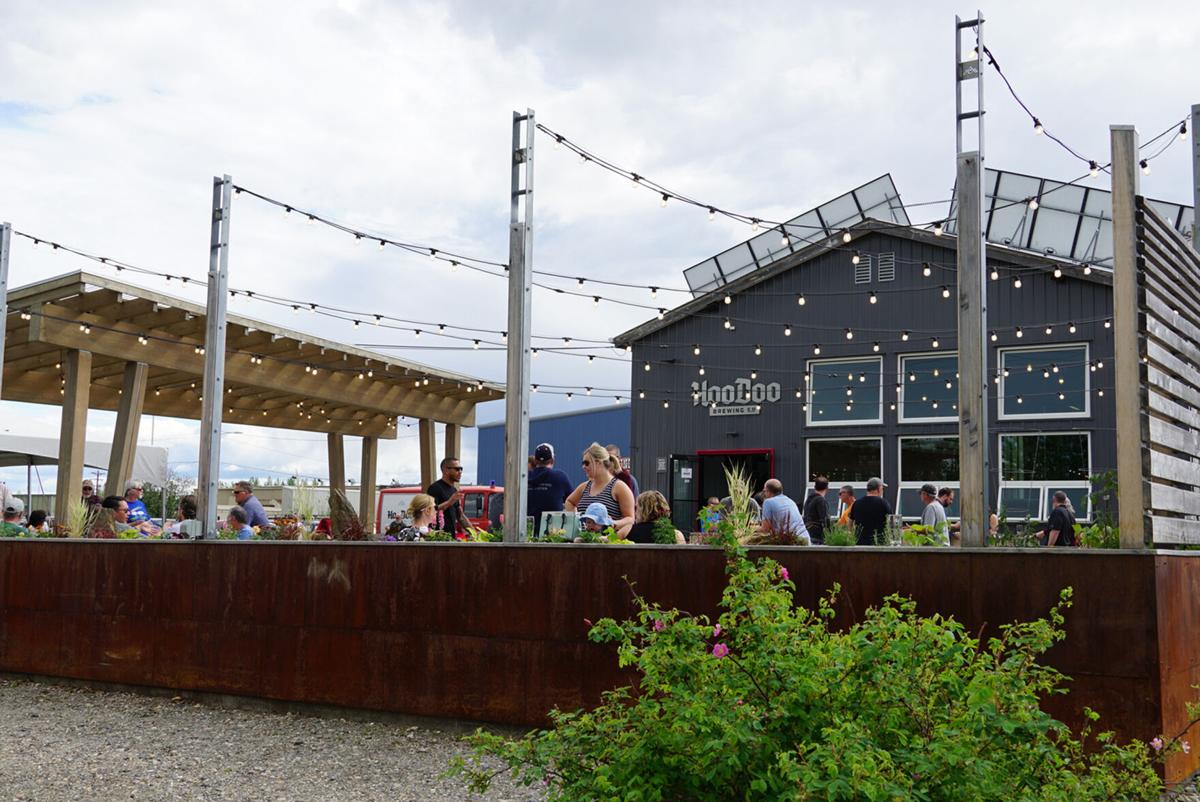 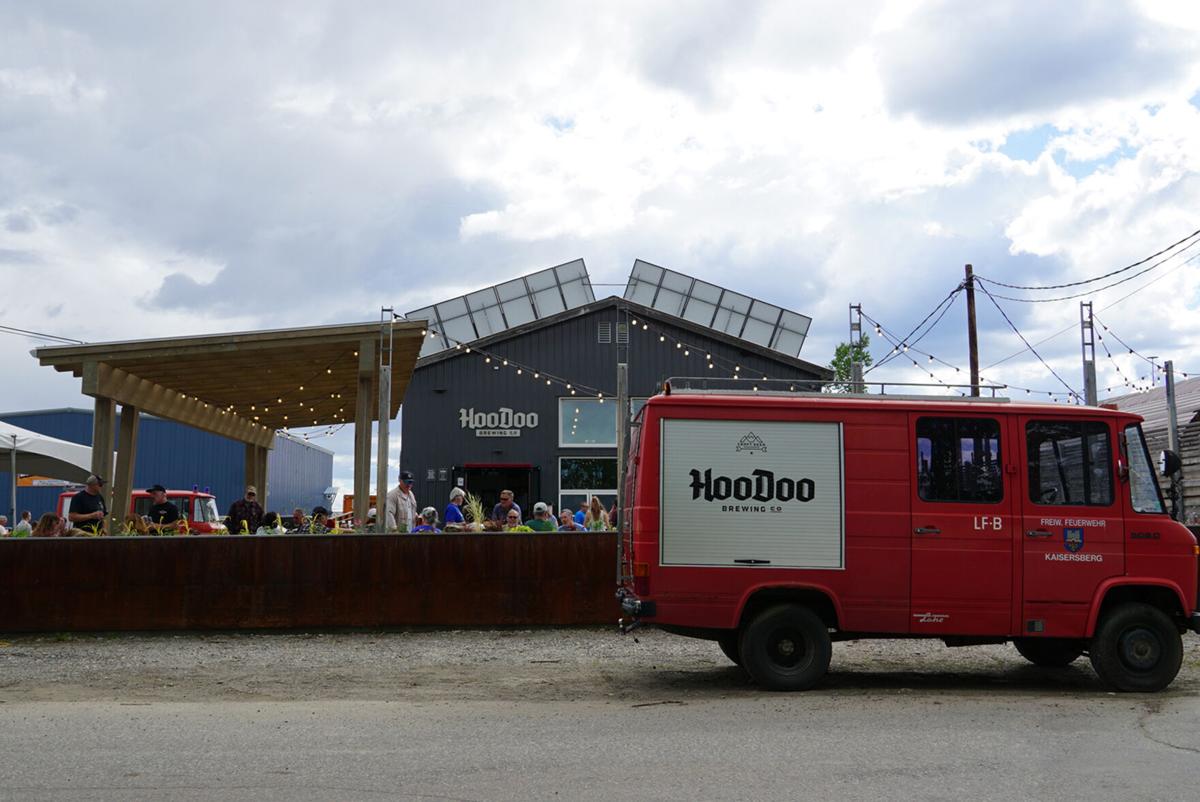 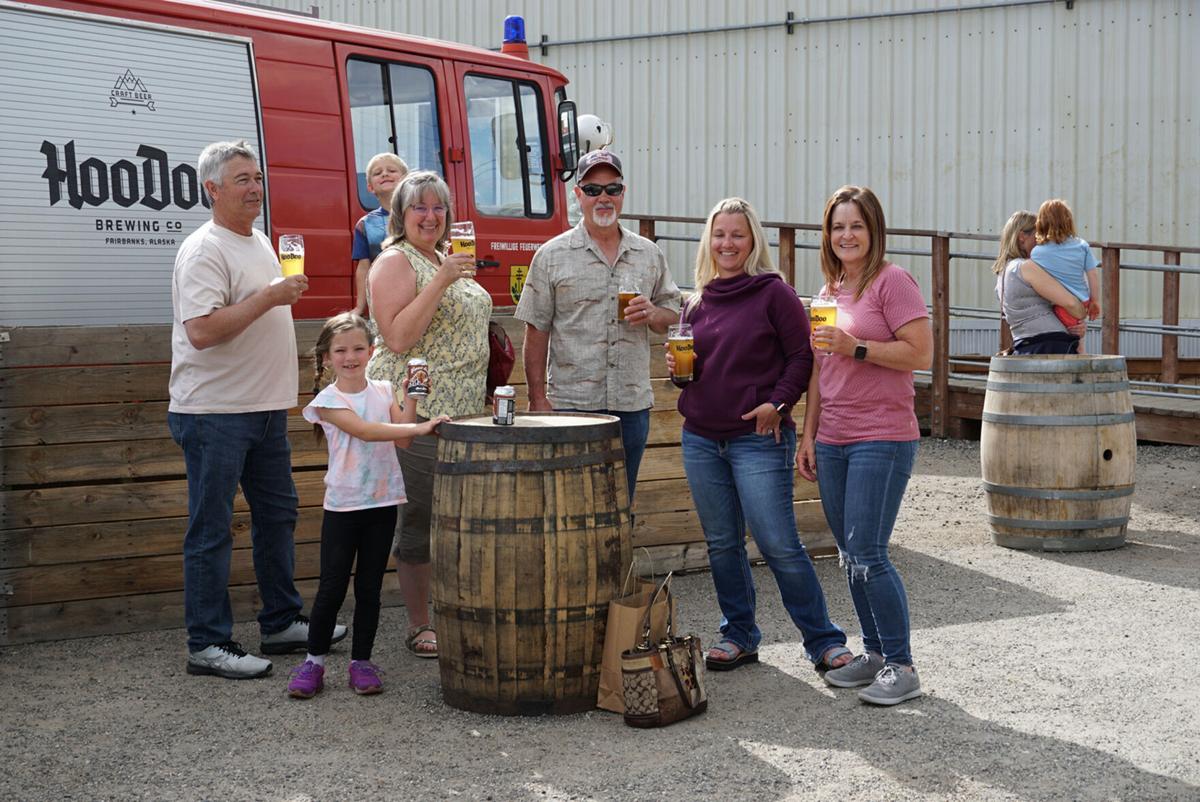 The Ruesch and Walmsley families reunite at HooDoo Brewing Company on a Friday afternoon, June 4, in Fairbanks, Alaska. The Walmsley family moved out from the area 17 years ago and came back to visit, choosing the brewery that has opened since then. 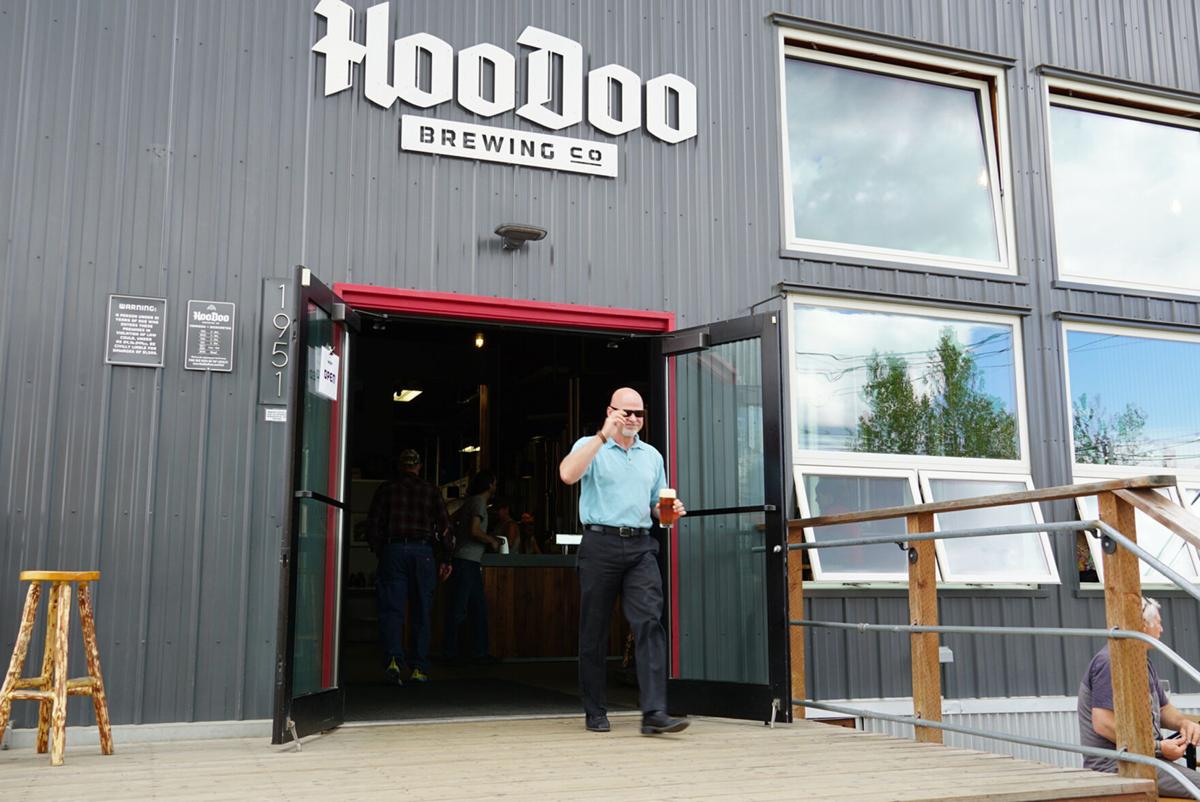 A HooDoo Brewing Company customer comes outside with a glass of beer on a Friday afternoon, June 4, in Fairbanks, Alaska. 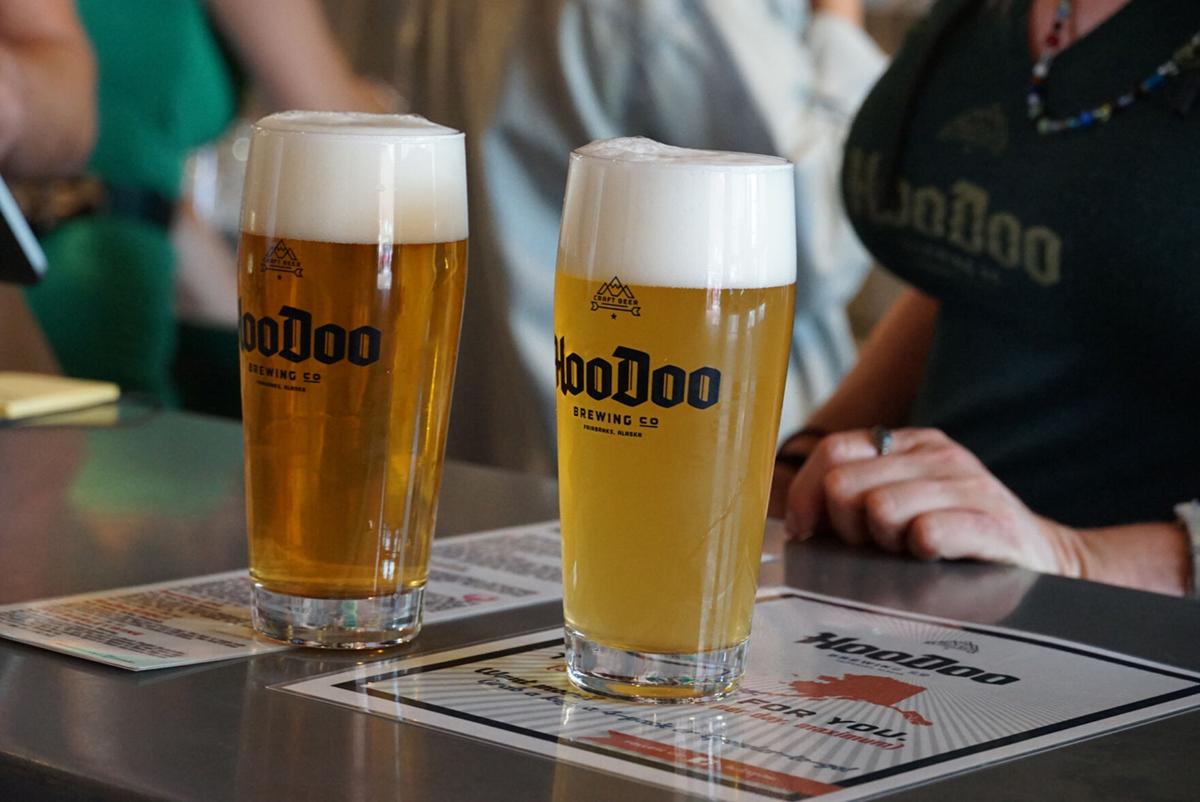 Two glasses of beer are ready for the HooDoo Brewing Company customer on a Friday afternoon, June 4, in Fairbanks, Alaska. 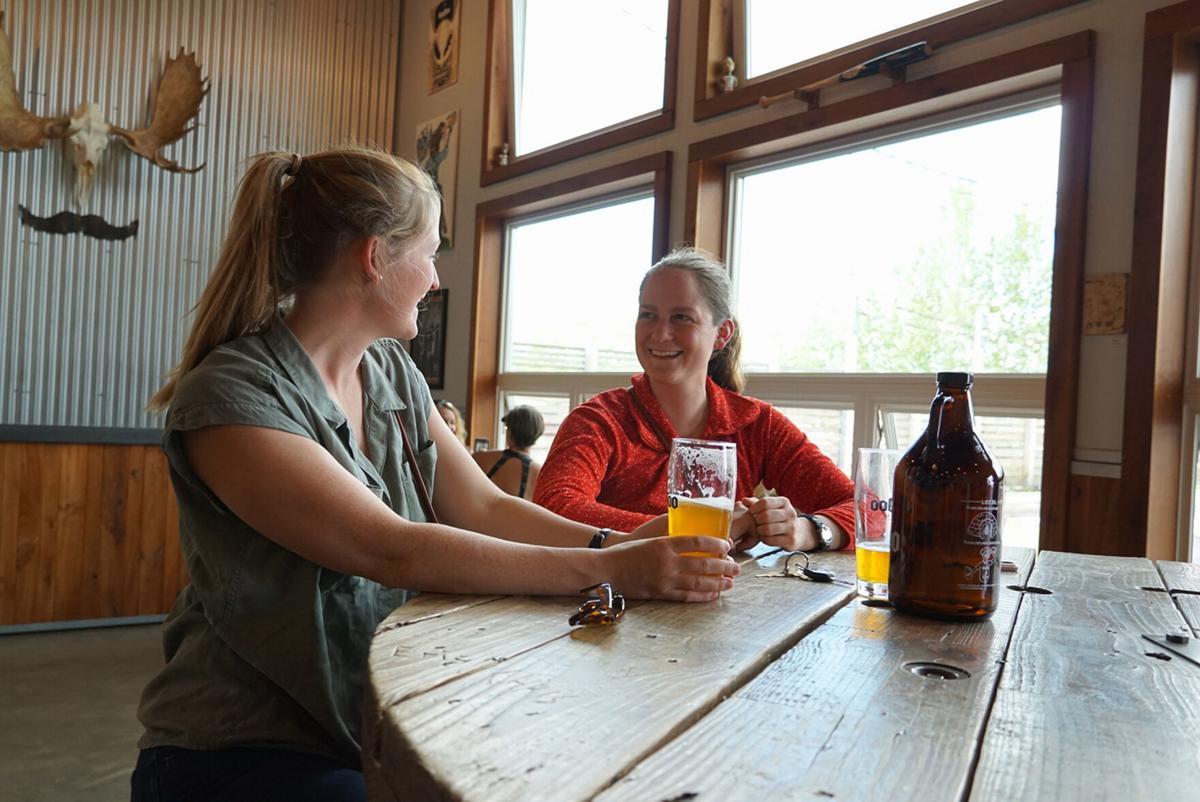 Caroline West and Colleen Goetz catch up while sipping beer from a growler at HooDoo Brewing Company on a Friday afternoon, June 4, in Fairbanks, Alaska.

A taproom lead Joh Reber pours beer at at HooDoo Brewing Company on a Friday afternoon, June 4, in Fairbanks, Alaska.

The Ruesch and Walmsley families reunite at HooDoo Brewing Company on a Friday afternoon, June 4, in Fairbanks, Alaska. The Walmsley family moved out from the area 17 years ago and came back to visit, choosing the brewery that has opened since then.

A HooDoo Brewing Company customer comes outside with a glass of beer on a Friday afternoon, June 4, in Fairbanks, Alaska.

Two glasses of beer are ready for the HooDoo Brewing Company customer on a Friday afternoon, June 4, in Fairbanks, Alaska.

Caroline West and Colleen Goetz catch up while sipping beer from a growler at HooDoo Brewing Company on a Friday afternoon, June 4, in Fairbanks, Alaska.

Last year brought a record number of new breweries to Alaska despite the pandemic, and Fairbanks opened its newest addition in May.

Five new breweries opened in 2020 across the state, and while most of the locations are in Anchorage, new spots have popped up in remote communities such as Hoonah, Gakona and Cooper Landing, according to the June issue of Alaska Economic Trends magazine issued by Alaska Department of Labor and Economic Development.

Overall, Alaska ranked fifth for breweries per capita and fourth in gallons consumed per capita in 2020, according to the Brewers Association cited in the report.

Latitude 65 opened on May 14 and it has been booming since, said co-founder Adam Keele.

“We’ve been open every day since then, and it’s been going great,” Keele said. “What would be considered a slow day here is still doing better than I had hoped for.”

Keele decided to open the brewery with two other people long before the pandemic. They chose a building back in October 2018, took control over it in December 2019 and started renovation at the beginning of January 2020.

“We dove in headfirst, quite literally days before the pandemic hit the U.S.” Keele said. “We had put down a pretty hefty deposit on brewing equipment in February 2020 and started the ball rolling, so there was no real going back.”

The pandemic brought manufacturing delays, and while Keele hoped to open last summer, that didn’t happen. By this spring, the owners were getting “tight on money,” Keele said.

“We just decided to open so we can have cash flow in instead of cash going out for a solid year and a half,” he said. “The only good thing about taking basically a year and a half to get open was the fact that the worry around the pandemic is over, now that we have vaccines going.”

Changed brewery business during the pandemic

Latitude 65 is just one of the new Alaska breweries, and the growth in the number of businesses comes despite the fact that they were among those hit the hardest by the pandemic, economist Neal Fried wrote in the report.

Bar closures, customers’ reluctance to visit businesses and lack of a tourist season all harmed the industry, Fried explained. Between 2019 and 2020, locally brewed beer consumption fell by 14%, and brewery employment decreased in 2020 for the first time in over a decade, dropping by about 100 positions, according to the report.

For Bobby Wilken, owner of the popular HooDoo Brewing Company, the pandemic meant changes. While before, HooDoo’s business was mostly focused on onsite consumption, in 2020, sales shifted drastically to growlers and cans.

By now the onsite consumption is back up to where it normally was, and the “to-go” beers became an addition to regular business, he said.

“It’s almost like we have an increased business of people knowing that we have all these different products in cans,” Wilken said. “They’ll come here and have a beer, and then grab a few cans to go.”

In terms of staffing, HooDoo did not reduce its production staff, but reduced shifts in the taproom, spreading out those cuts in hours over all the employees. One person left because it wasn’t enough hours, but as the business is coming back to normal, they are increasing the hours and coming out of the pandemic with the same staff.

Other changes in business for HooDoo were rolling out curbside pickup, creating a reservation system for the taproom in winter and expanding the outdoor area to promote people being outside in summer.

“It’s definitely been a lot of work, you know. It’s been difficult,” he said. “But we’ve weathered it just fine, and I think it’s really made us a stronger, stronger people and a stronger business, just because we were forced to make some big changes very fast.”

The promise of recovery and continuous growth

Despite the challenges of the pandemic, breweries kept opening in 2020 and the recovery looks promising.

With the new openings, Alaska now has 49 breweries, spread across 25 communities, and the industry has been growing for some time now, according to Fried. From 2017 to 2019, Alaska went from 36 breweries to 44, also growing jobs from 397 to 503.

Keele said that this growth is a reflection of Alaska finally catching up with the national trend. Remoteness of the state and the high cost of shipping the ingredients and equipment here is what kept the state behind the curve, he said.

“It’s just so much more difficult to do anything up here to some degree,” he added. “You have shorter seasons when you can do work outside and on buildings.

“Another big stumbling block is that we have some of the most restrictive brewery laws,” he added. “That is a bit of a barrier to entry as well, because we’re being so limited on what we can do — like the amount we can serve, the amount of hours we can be open, the restrictions on what can and cannot happen inside of our establishment.”

Alaska laws restrict breweries that don’t have a full liquor license to serve up to 36 ounces per person per day and to close at 8 p.m.

Wilken said that on the positive side, the law helps breweries become more like after-work pubs and less like bars.

“The law has almost forced it into being just this very family-friendly social place to just have a beer or two and then go back to your daily life,” he said. “That’s kind of created the scene and it keeps the breweries as these nice clean spaces.”

For Keele, the industry boom seems to meet the needs of the transient population in Alaska.

“It’s a big tourist area, and there’s a lot of military that come and go here, and they’re used to a certain, brewery-winery-distillery culture in the Lower 48 that really wasn’t happening up here,” he said. “I think people finally started jumping on it, trying to make it happen, even though it does cost a lot more up here than it would be to do in the Lower 48.”

“For me, breweries were always different from bars. I always enjoyed it, because it was nice being where a product is made and being able to experience it there. It was just something I was always fascinated with, and I just enjoyed the atmosphere more, you know. Breweries weren’t nearly as loud; you didn’t have people necessarily there to just get drunk and be rowdy. It was like you were there appreciating the craft,” he said. “I think people were desperate for a place to experience that up here.”