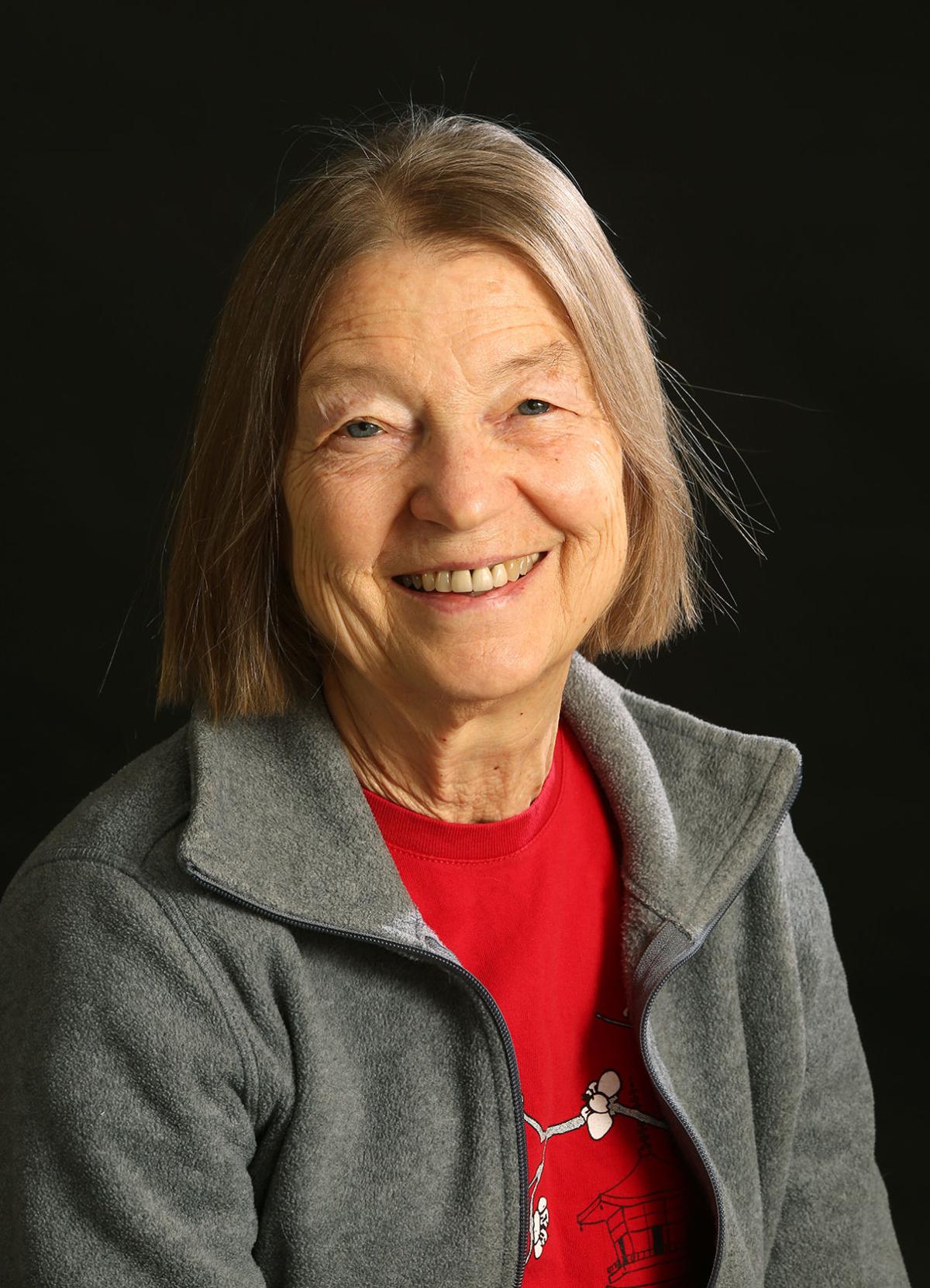 Suzanne Rich Osborn is the Spotlight for the week Wednesday afternoon, November 21, 2018. 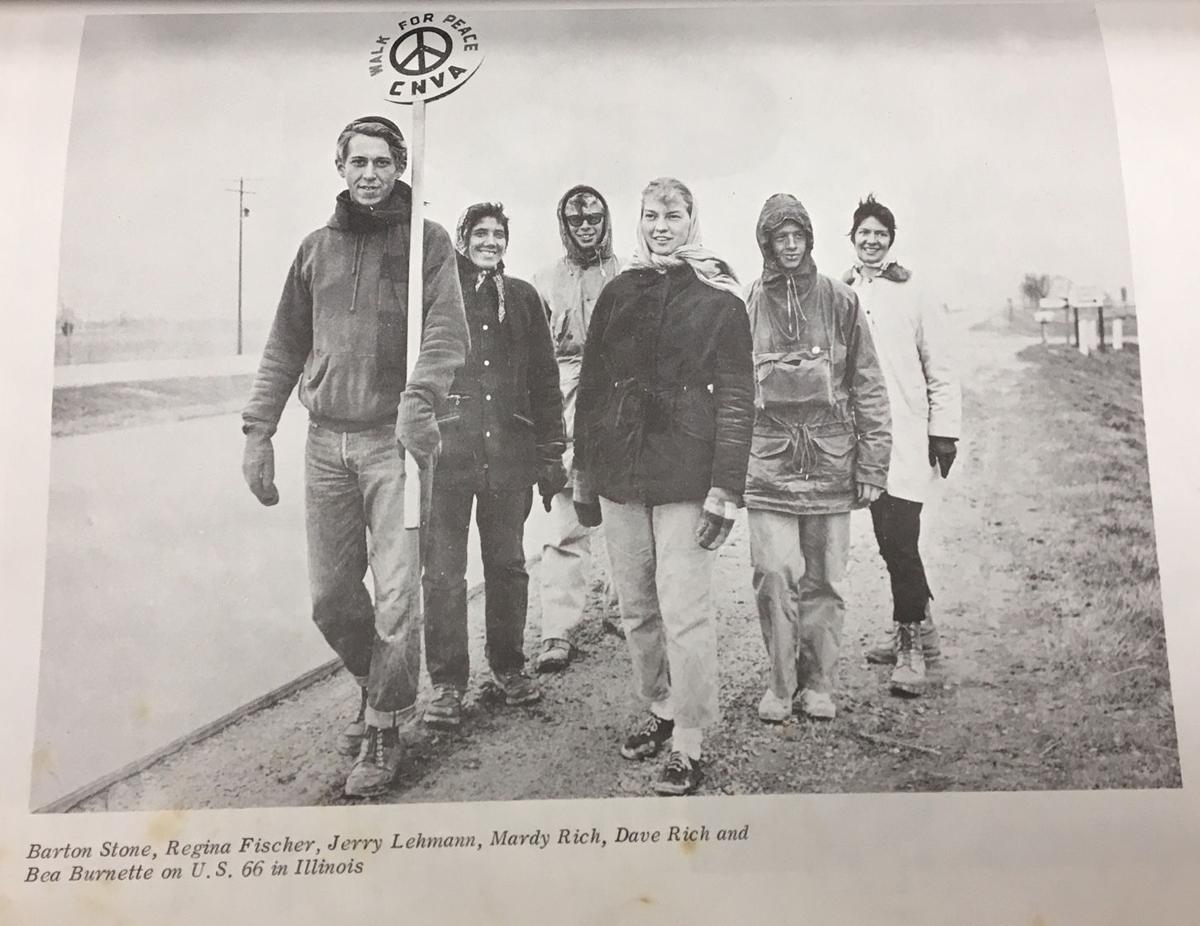 Suzanne Osborn, who at the time went by the name Mardy, on the peace walk in 1960. On the left is her first husband, Barton Stone, whom she married in Helmstedt, Germany.

Suzanne Rich Osborn is the Spotlight for the week Wednesday afternoon, November 21, 2018.

Suzanne Osborn, who at the time went by the name Mardy, on the peace walk in 1960. On the left is her first husband, Barton Stone, whom she married in Helmstedt, Germany.

FAIRBANKS — In a world where many people talk about making a difference, Suzanne Rich Osborn is one of those rare individuals who actually tries to make the world a better place. A former activist, school teacher and midwife, Osborn founded the Fairbanks Peace Choir in 2005 as a way to inspire people and promote understanding, social justice and environmental stewardship. Osborn stopped by the News-Miner office Wednesday to discuss her lifetime mission to create a world without war.

Osborn was born and raised in North Newton, Kansas, which is home to Bethel College, a four-year, private college affiliated with the Mennonite Church. Osborn, who went by the nickname Mardy at the time, was 21 and pursuing a degree in education at the college when an international peace walk came through town in 1960. Osborn jumped at the chance to join.

“I was brought up with conscientious objectors to war, and it was always the guys who had some way to witness for peace. This was something a woman could do, so I quit school right before I graduated, and went on that walk,” Osborn said. “We wanted to see a world without war. We were talking about making a unilateral peace and for each government to stop militarism.”

The experience of a lifetime

The walk, which was organized by the Committee for Nonviolent Action, began in San Francisco and ended in Moscow. Participants crossed the U.S. on foot, boarded a plane in New York City and landed in London. From there they took a boat to France, but French authorities refused to let them land.

“We were bound and determined to go, so we jumped ship in the harbor at La Havre and went ashore,” Osborn said, laughing at the memory. “We had leaflets in plastic bags tied around our waists. We were met by police and taken to jail, and then we were carried back on to the boat and sent back to England.”

Undaunted, the participants took a ferry to Belgium and made their way to Germany. In Helmstedt, which at the time was a major border crossing between West and East Germany, Osborn married fellow peace walker Barton Stone, whom she’d met during the U.S. portion of the walk. Shortly afterward, the group encountered another obstacle.

“We went to Berlin and then they put up the Berlin Wall and didn’t want us in East Germany anymore. They had to carry us onto a bus and send us to Poland,” Osborn said.

The group walked through Poland and into the Soviet Union, where they received a warm welcome.

“In Russia they took care of us. They set up tables and put white table cloths on and fed us so we could keep walking. We handed out thousands and thousands of leaflets along the way, and picketed at military bases whenever we could,” Osborn said. “We found that the people in Russia were just like the Americans. We went to Moscow University and spoke to classes there, and they were just all for us because they’d lost 25 million people in WWII and they had no desire for war.”

Osborn and her husband returned to the U.S. in 1961, made a brief stop in Kansas to say hello to her family and continued on to San Francisco. They had two children and Osborn finished her teaching degree via correspondence. They moved to Chicago after Osborn got a job teaching kindergarten at a “horribly crowded” school on the South Side.

“They gave me 42 kindergarteners, and the first room I had nothing but chairs in it — no tables or anything,” Osborn said. “I was there for four years and during that time I led an effort for the city of Chicago to build a new school because it was built for 600 and they had 1,600 students in there. They were meeting in closets and in the gymnasium.”

Osborn organized picket lines and convinced the teachers to refuse to teach and the parents to refuse to send their kids to school. Her efforts were successful and the city built the new school, but Osborn wasn’t there to enjoy it.

“My husband was working for U.S. Steel and was organizing improvements there. I thought I could live in Chicago the rest of my life, but he got really burned out. So we moved back to California and lived on a Buddhist farm in Marin, where we meditated for four years,” Osborn said.

Bringing new life into the world

Osborn decided to try a new career after her marriage broke up and her kids finished school. While on the farm she’d witnessed several home births, and that, combined with memories of her Ob/Gyn uncle leaving family gatherings to deliver babies, made her decide to become a midwife. She attended school in El Paso, Texas and moved back to the Bay Area afterward, but had a difficult time practicing because midwifery wasn’t legal there at the time. She moved to a small town in Eastern Washington and practiced there until a job offer brought her to Alaska in 1984.

Osborn said she was instantly taken with Fairbanks because it had “a beautiful sky and a university.”

“One thing Fairbanks has in common with Kansas is beautiful skies. I’ve been a lot of places and nothing was as beautiful as Kansas until I came here,” Osborn said. “I was also used to being in an academic environment, and the place I lived in Washington State was a lovely little town but it didn’t have a university. I really missed that.”

Soon after moving here, Osborn met her current husband, Phil Osborn, whom she married in 1986. Osborne was the first legally licensed midwife in Fairbanks and delivered about 350 babies in her 15 years of practice here, but quit in the late 90s so she could dedicate herself to caring for her son when he was diagnosed with leukemia. After he passed away, Osborn was at loose ends and wanted to do something meaningful while promoting her passion for peace. She remembered attending a peace choir concert in Ohio while still in college, and thought the idea might go over well in Fairbanks. Now in its 13th year, the choir performed its winter concert at the Unitarian Universalist Fellowship of Fairbanks on Saturday.

“We have both professional singers and also people who just love to sing,” Osborn said. “Our main thing is not total expertise, our main thing is our message of peace. When you sing, your whole physiology changes. It lifts the spirits.”