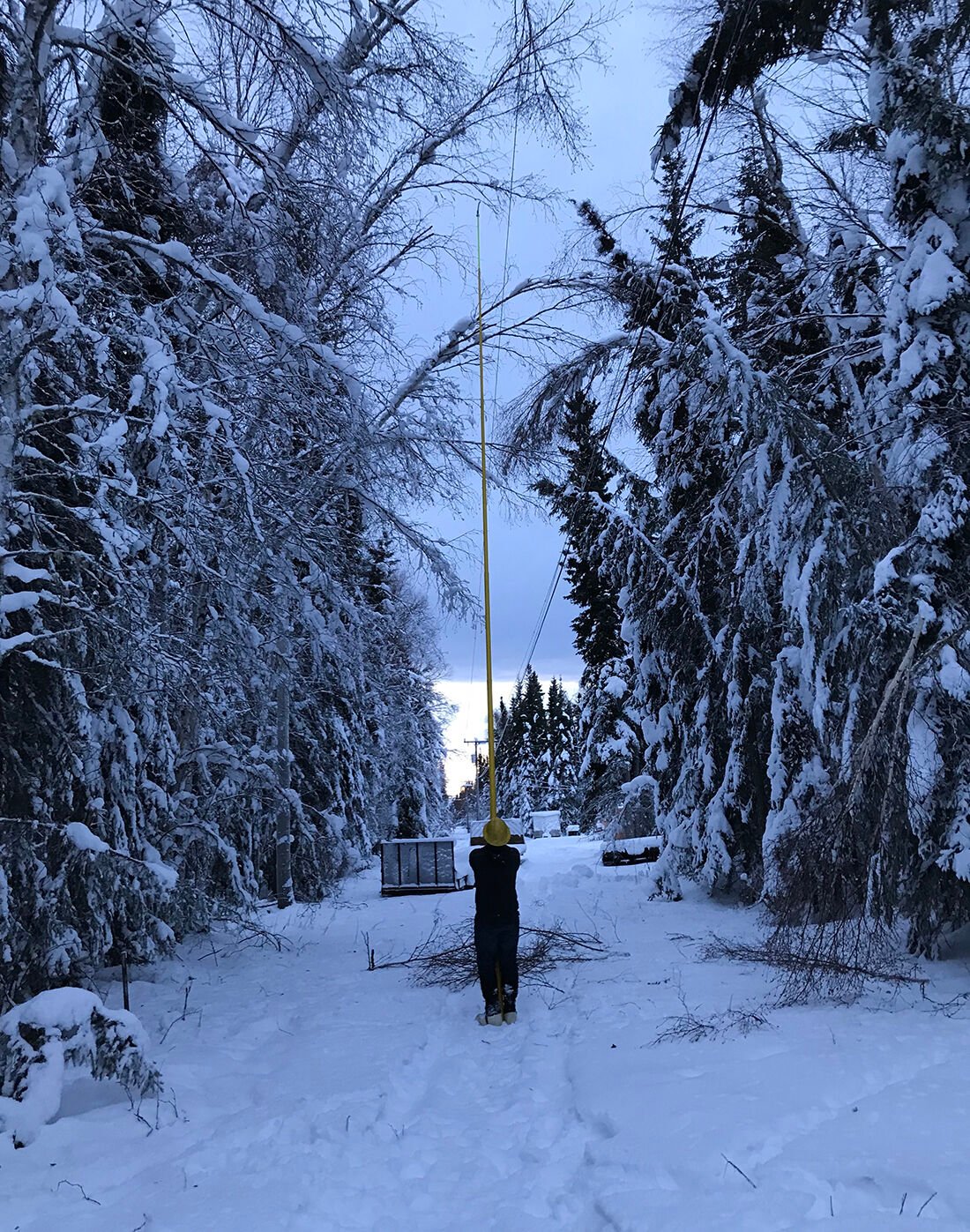 A GVEA lineman is making a snow-related power line repair. 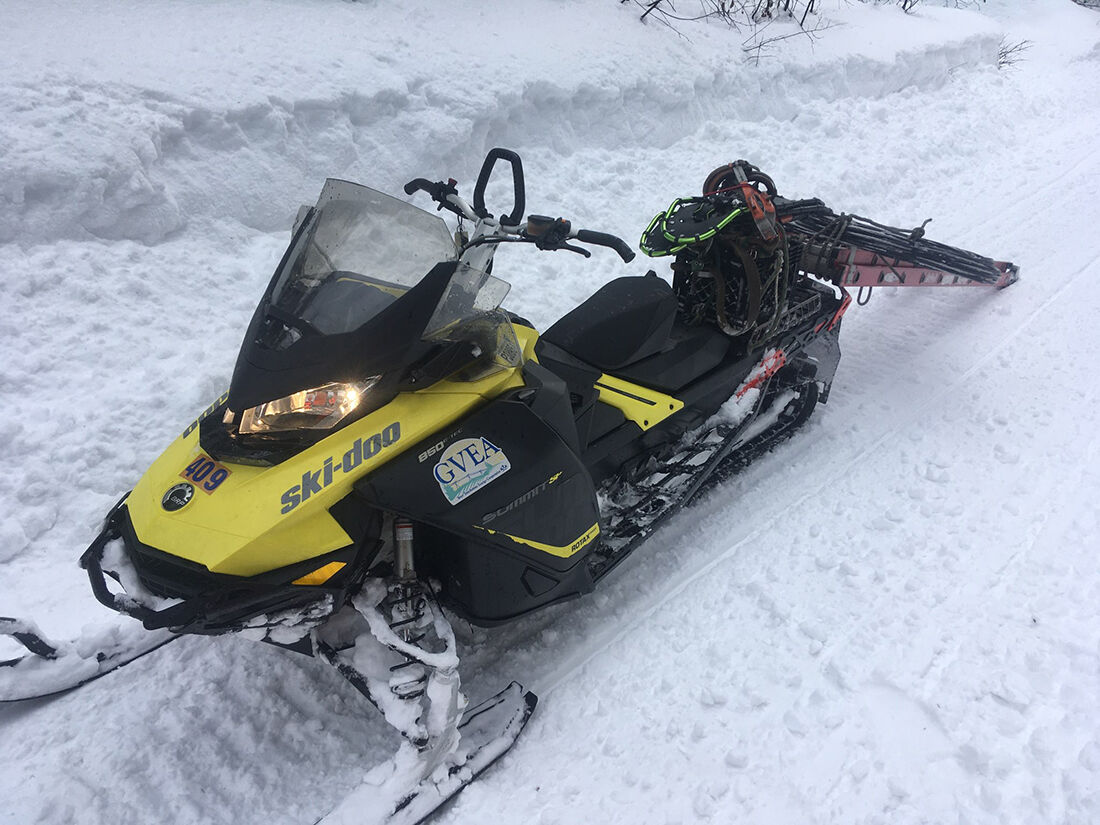 Linemen attached a ladder to their snowmachine to get it up the hill for snow-related power line repairs on April 3. 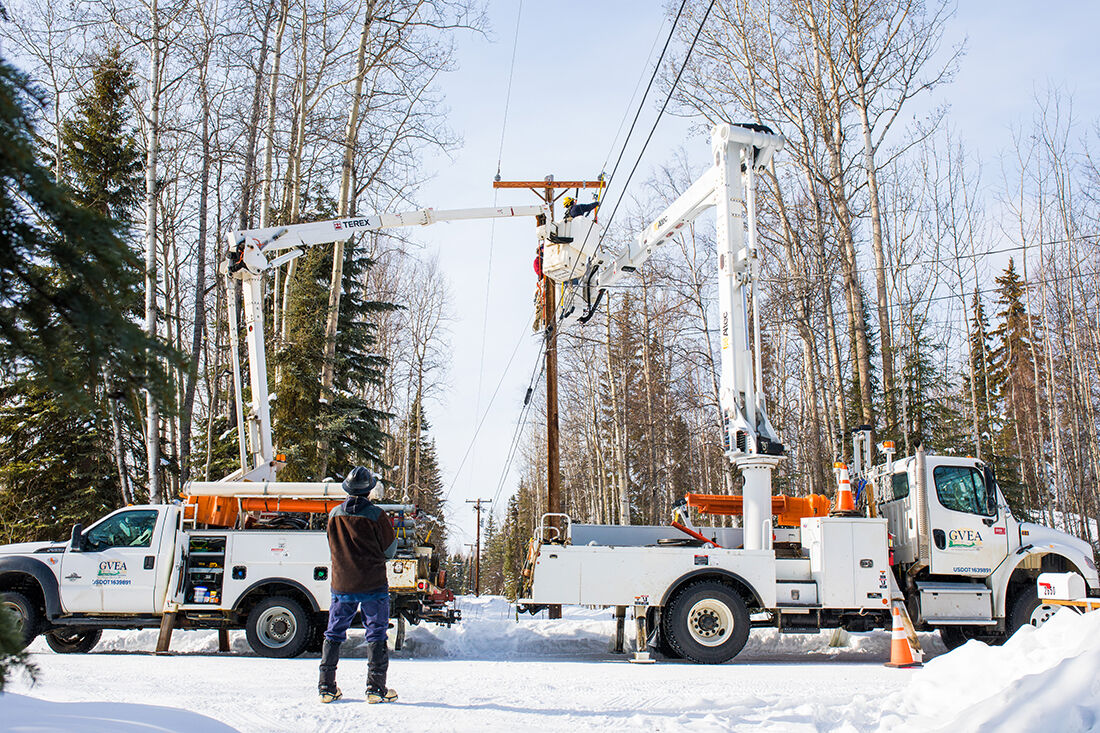 A GVEA lineman is making a snow-related power line repair.

Linemen attached a ladder to their snowmachine to get it up the hill for snow-related power line repairs on April 3.

When the weather changes, so do the conditions for powering the Interior. This is why when Golden Valley linemen Ian Olesen and Troy Birdsall got to work last weekend, they knew the blizzard would make their life a little more challenging.

“I’m 6-foot-4, and I was in waist-deep snow right there, and I was like, ‘Wow, this is gonna be a bad night,” Olesen said. “So we loaded our snowshoes onto the truck and put snowmachines on a trailer and went out to Chena Hot Springs Road where the power was out.”

Olesen and Birdsall worked from 6:30 p.m. April 3 until 7:30 p.m. April 4, responding to about six time-consuming outages. Overall, the issues Golden Valley Electrical Association linemen worked on this past snowy weekend were small and isolated, with the largest outage leaving 1,100 members without power, but most of them affecting anywhere from 10 to 60 people, said Meadow Bailey, GVEA’s director of External Affairs and Public Relations.

“But the challenge was that they were longer in duration because it was harder for us to get to them,” Bailey said.

At about 4 a.m., Olesen and Birdsall decided to change their regular snowmachines to the mountain-style machines, equipped with bigger and longer tracks, right in time for the next outage at the top of a hill.

“We had to tie a 20-foot extension ladder to the back of the snowmachine, with all the tools, and just drag all the stuff up the hill,” Olesen said. “It was crazy! But we got it done.”

Another issue happened in the middle of a farmer’s field. Linemen “couldn’t see because it was snowing so hard,” and there was a danger of getting stuck in the snow. They drove to the farmer’s house to make sure it was OK to drive across the field, but because they came in the middle of the night, the farmer met them with a rifle.

“I’m like, ‘It’s Golden Valley! It’s Golden Valley! We are trying to figure out why the power is out!’” Olesen said. “So it can be a little bit tense sometimes but as soon as he found out it was us, he wanted to get his tractor out and plow the way for us.”

Most of the issues Olesen and Birdsall needed to solve that snowy night were insulators failing, which came as a surprise to the linemen.

“That snow was wet and heavy,” Olesen said. “We expected to see trees drooped over the lines.”

Trees bowing over from the snow load is the most common source of outages after a big snowfall, agreed Ian Wiedmaier. The trees “would cause the wires to load up with snow, and when it releases, it slaps the other wires, and that causes a fall,” he said.

Besides snow, Wiedmaier explained that issues can come from many directions: old equipment failing; weather fluctuating; wind blowing; summer lightning frying transformers; and people — cutting trees, running into transformers and running into the poles. Animals are another common source of outages.

Joseph is one of the GVEA dispatchers who assign linemen crews to different issues, depending on the type and scale of the problem. At their office, dispatchers see the map of the whole GVEA system, the connectivity with power sources and sometimes  how big the issue is.

Power Systems Manager Pete Sarauer explained that GVEA employs 16 linemen, with everyone on shift during the weekdays, on-call at night, and several people on standby on weekends and holidays.

“We always got somebody who is committed to being here in Fairbanks,” Sarauer said.

Figuring out the source of the outage often requires dispatchers actually send linemen to investigate the situation.

“You can have a couple of miles of patrol before you see what’s wrong,” Olesen said.

Updated addresses on file and details of what happened are some of the things that help both dispatchers and linemen respond to outages most effectively.

“We really are in the business of giving people as inexpensive as possible, as reliable as possible and as safe as possible the power they need to live their lives,” Joseph said.