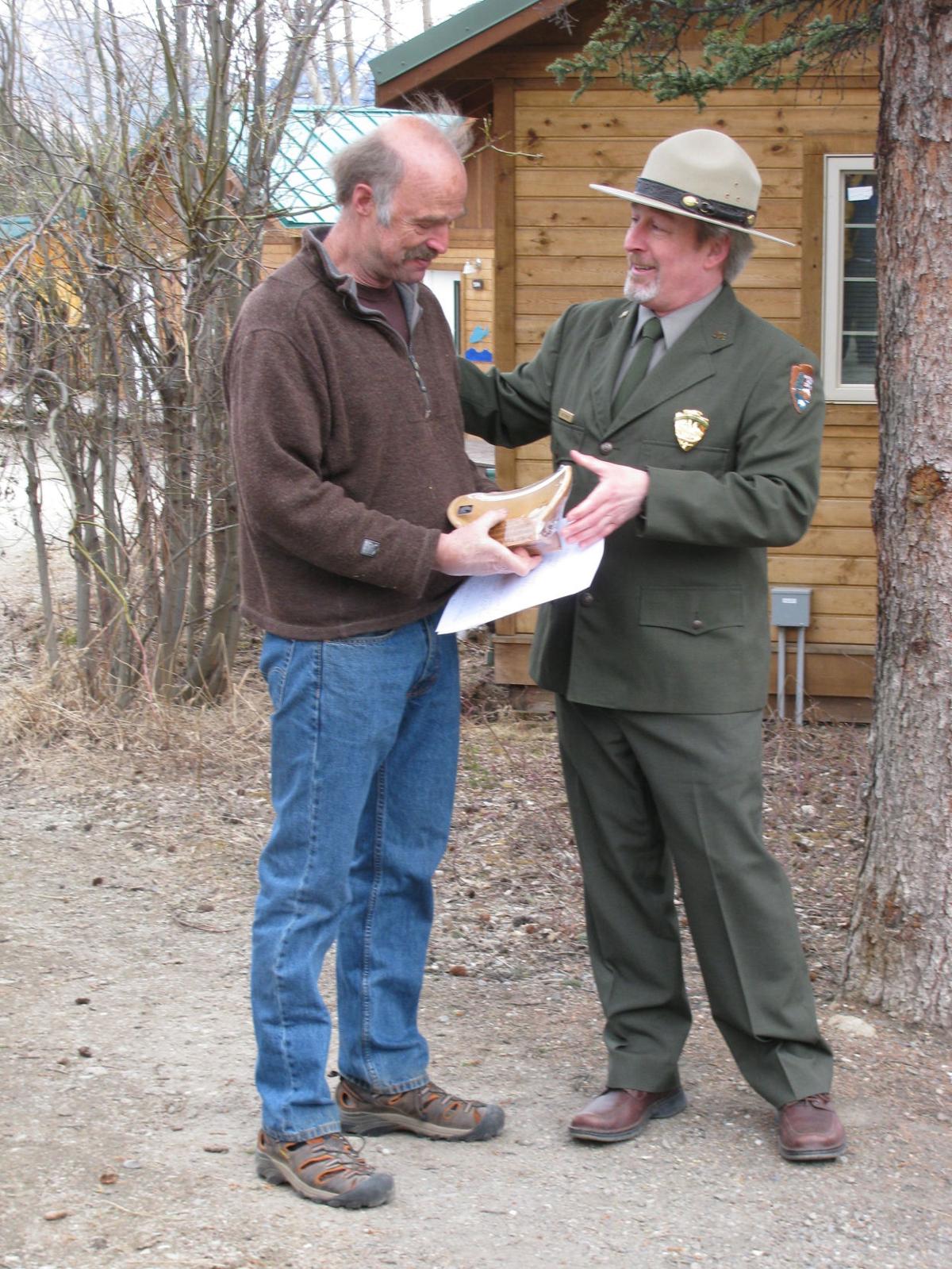 Now-retired deputy superintendent Elwood Lynn, one of the founders of the program, is congratulated by Denali Park Superintendent. Don Striker. 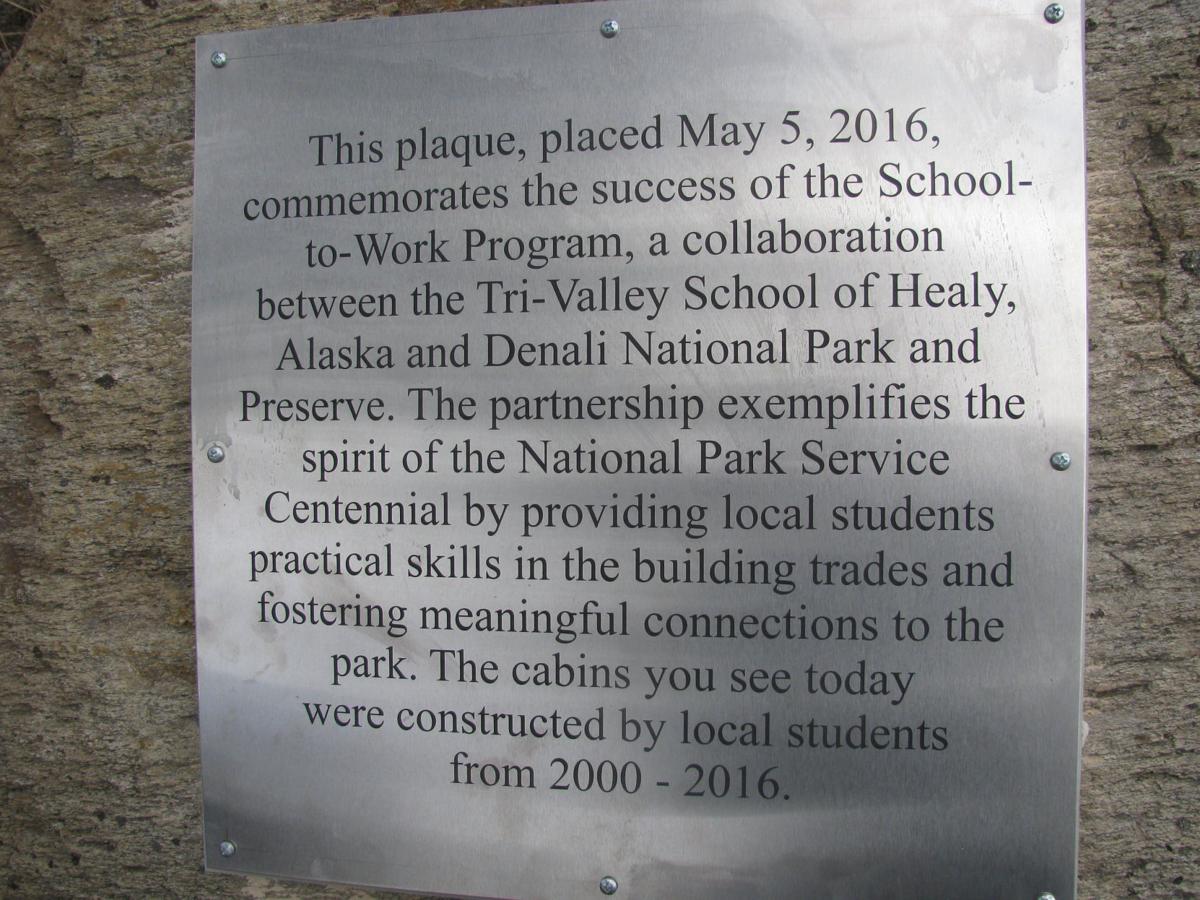 This plaque was unveiled Thursday in the middle of "C Camp," which is park employee housing. 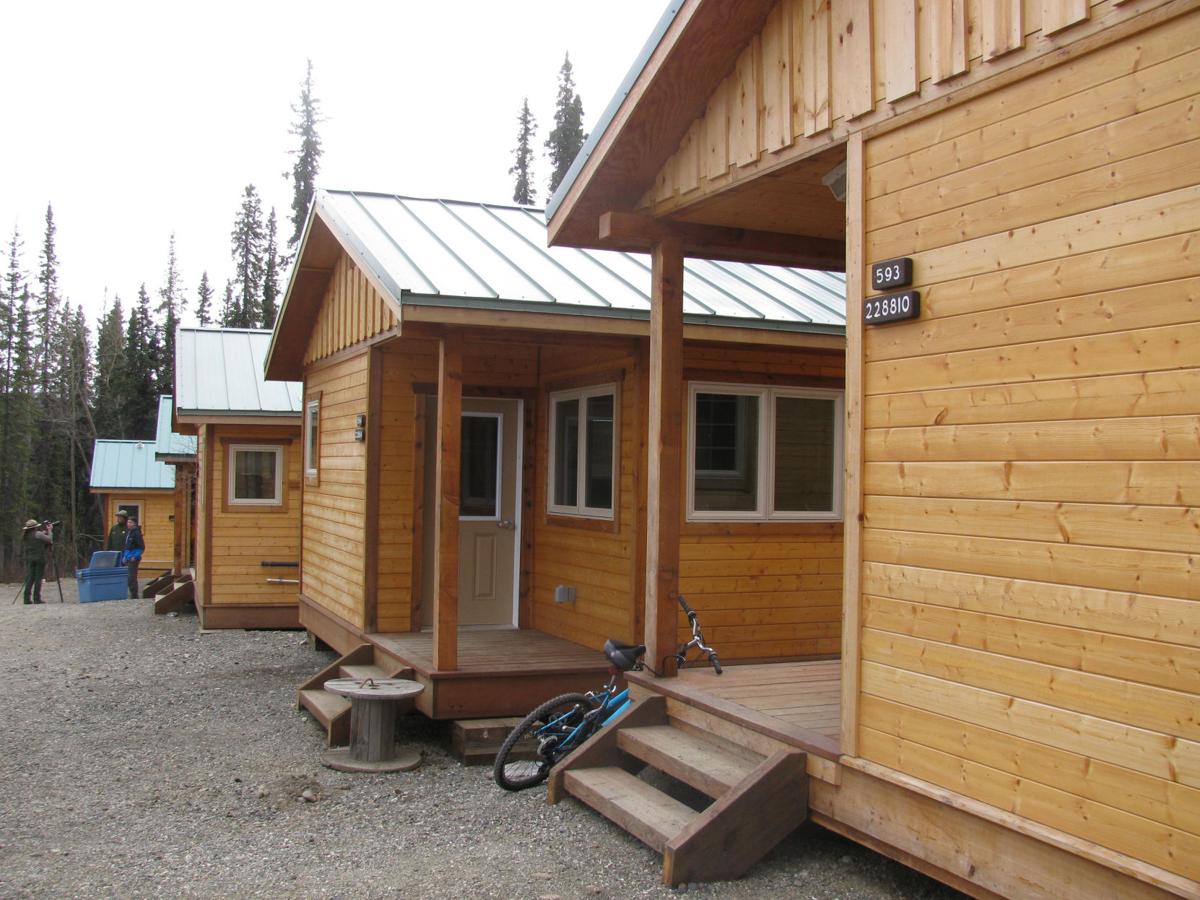 These are some of the cabins, now park employee housing, built by students at Tri-Valley School. 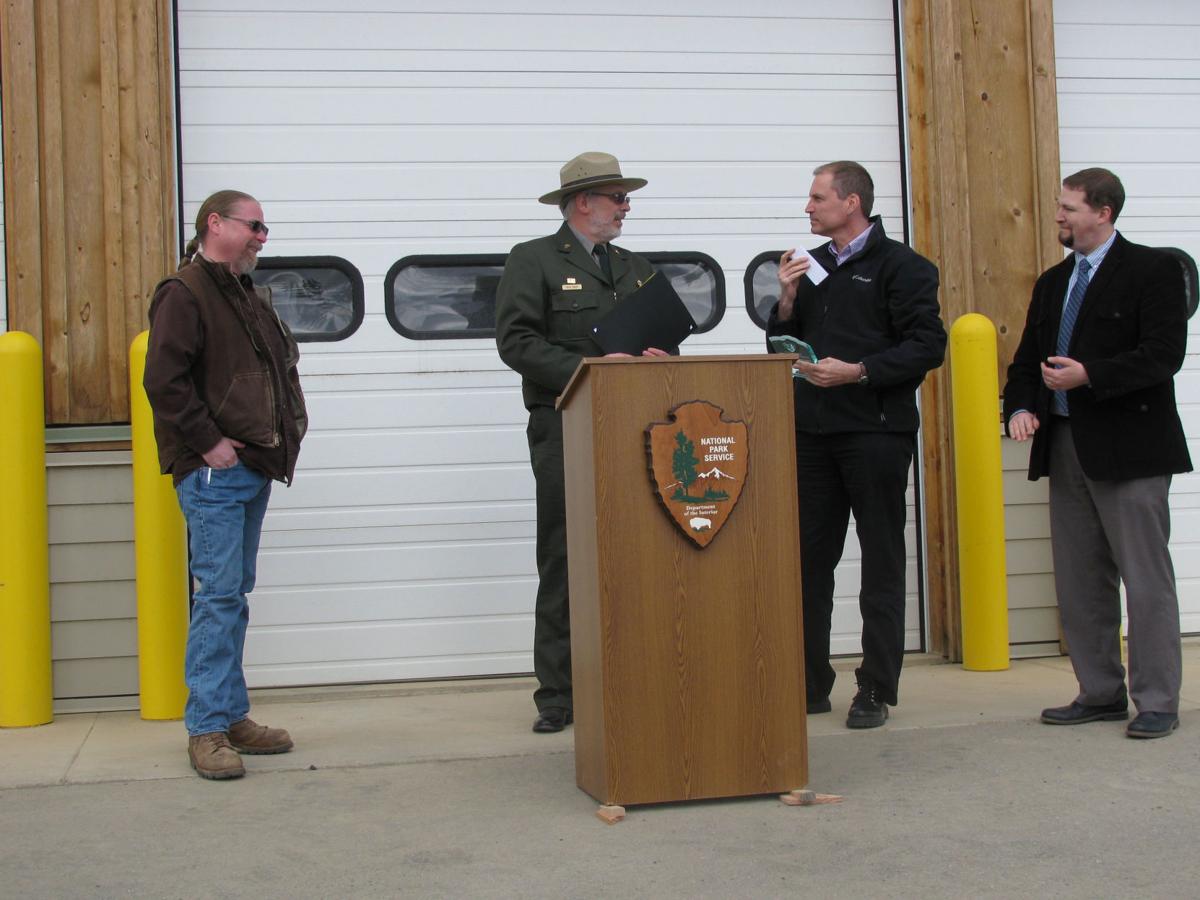 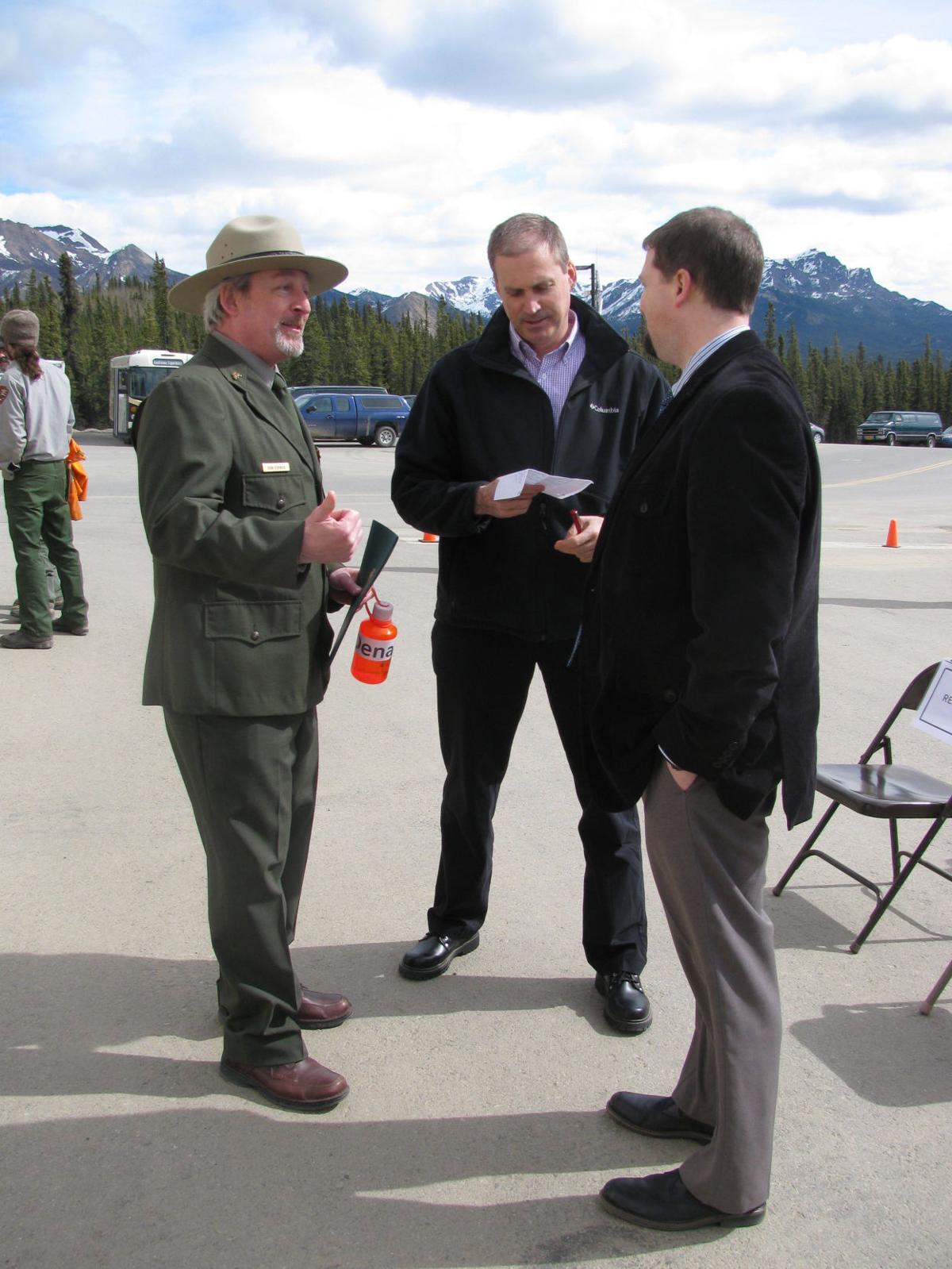 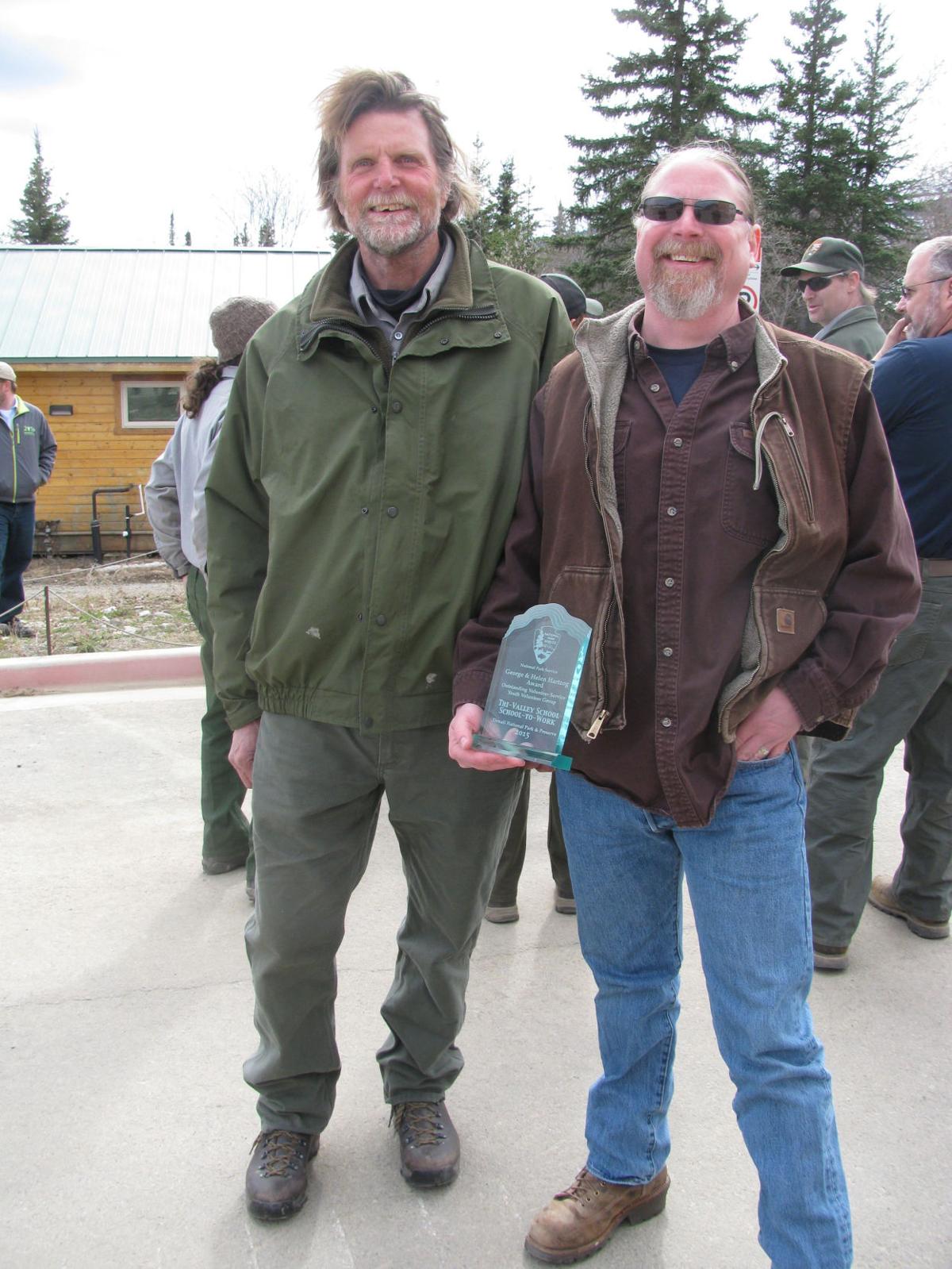 Founder Elwood Lynn called these two teacher carpenters the glue that holds this program together: Chip Barker and Don Mirosh. 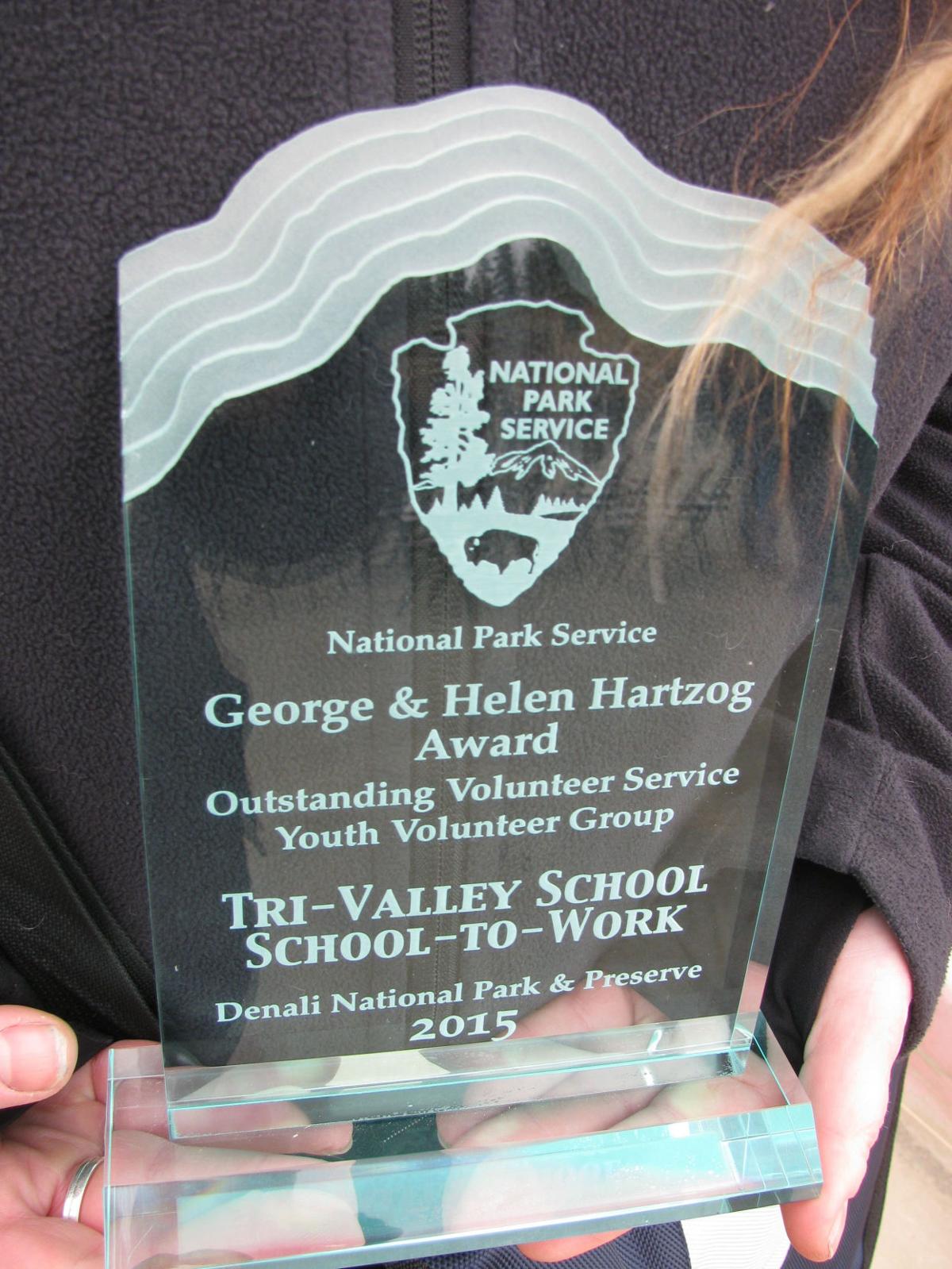 The School-To-Work Program, building trades, is a collaboration between Denali Borough School District and Denali National Park. It received this national award.

Now-retired deputy superintendent Elwood Lynn, one of the founders of the program, is congratulated by Denali Park Superintendent. Don Striker.

This plaque was unveiled Thursday in the middle of "C Camp," which is park employee housing.

These are some of the cabins, now park employee housing, built by students at Tri-Valley School.

Founder Elwood Lynn called these two teacher carpenters the glue that holds this program together: Chip Barker and Don Mirosh.

The School-To-Work Program, building trades, is a collaboration between Denali Borough School District and Denali National Park. It received this national award.

No one ever thought the school-to-work program, a partnership between Denali National Park and Denali Borough School District, would ever last.

Sixteen years later, the program has earned national recognition and is still going strong. In addition, an entire generation of students has learned construction skills, the park has been able to provide quality cabins for employee housing, and some of those building trade students now work in local jobs, using the skills they learned in this program.

Some of those former and current students, dignitaries, and park and community members gathered at an outdoor ceremony Thursday to applaud Tri-Valley School receiving the national George and Helen Hartzog Youth Volunteer Group Award. The award recognizes outstanding volunteer service and exemplary contributions.

One of the founders, now-retired deputy superintendent Elwood Lynn recalled how it all began, when then-superintendent Linda Buswell asked him to write up an agreement with the school district.

“I got to thinking,” he told high schoolers in the audience. “I wrote that before you guys were born.”

Along the way, he said, organizers always followed the law, but bent some rules and regulations just a bit, to make it all work.

incentive to get this program going. The Wonder Lake Ranger Station, built in the 1930s, was sinking into the ground. The park moved the building, filled in the foundation, then wondered what to do next, because now employees needed a new place to shower.

“I’ll bet the school could build this for us,” Lynn remembered thinking.

Alas, there was no money.

“That’s where these rules need to be bent just a little bit,” he said. “I put a tax on all of our accounts in the park. I took one percent.”

“Now we have money,” he said. “Let’s buy some materials.”

The shower house was the first structure students built, in the year 2000.

Not everyone was thrilled initially.

“We had a number of parents say we were taking jobs away from the community,” said Lynn. “Classic government over reach.

“‘No,’ I said, ‘This is school. They are learning a valuable trade. We are not taking away jobs.’ When they saw the finished product and what kids could do, they were believers.”

“It was the best classroom it could be,” Lynn said.

“It was really rewarding to see the skills developed,”  Lynn said. “Watching local companies in the area come up to Chip (Barker) and Don (Mirosh) and say, ‘Hey, we need carpenters this year. Who are the best ones in your class?’”

He called those two teacher carpenters the glue that holds the program together and the matchmakers, who connect students with jobs.

“I’ve actually had some business owners say they can’t believe the caliber of employees they are getting from the school, because they have such a strong knowledge base,” he added.

The program also persevered with quality construction, even though naysayers thought it would be cheaper to not insulate the cabins and to not use 2-by-6 walls.

“That’s how it is today,” Lynn said, at the time. “But the price of oil is going to go up and I predict these cabins will be used year round.”

Indeed, one-third of the cabins are now used during winter months.

“My prediction is coming to fruition,” he said. “I feel good about it.”

Then he looked at the high schoolers in the audience and he said, “We all own the parks, but you guys own a little bit more than anybody else. I would predict, as you get older and have your own families, you’ll come back and show your kids what you did here. I know these cabins are going to be here throughout your lifetime and their lifetime.

“You have learned lifelong skills that will do you well for the rest of your life.”

“I was in building trades 2005 to 2007,” said Eric Helwig, now a park employee. “I learned a lot of practical knowledge, the importance of personal protective equipment and power tools, and every day since I left school, I go back to that knowledge, whether I am building or fixing something.”

Helwig said the experience helped him realize that Denali National Park is a special place. He thinks he appreciates it more because of this connection.

“I walk through C Camp and I get a good feeling, because I had a part in building a couple of those cabins,” he said.

Regional Parks Director Herbert Frost said the park recognizes the importance of volunteers to the park. In 1970, there were a few hundred volunteers at national parks. Today, there are 430,000 volunteers.

“That’s why partners and volunteers are so critically important,” he said. “We have a program that builds mutually beneficial partnerships and creates stewards that we need in the future.”

For this program, students built more than 36 cabins, plus a shower house, and some greenhouses. More projects are now pending.

Each building also has special student artwork incorporated into the structure, thanks to art teacher Kassandra Mirosh.