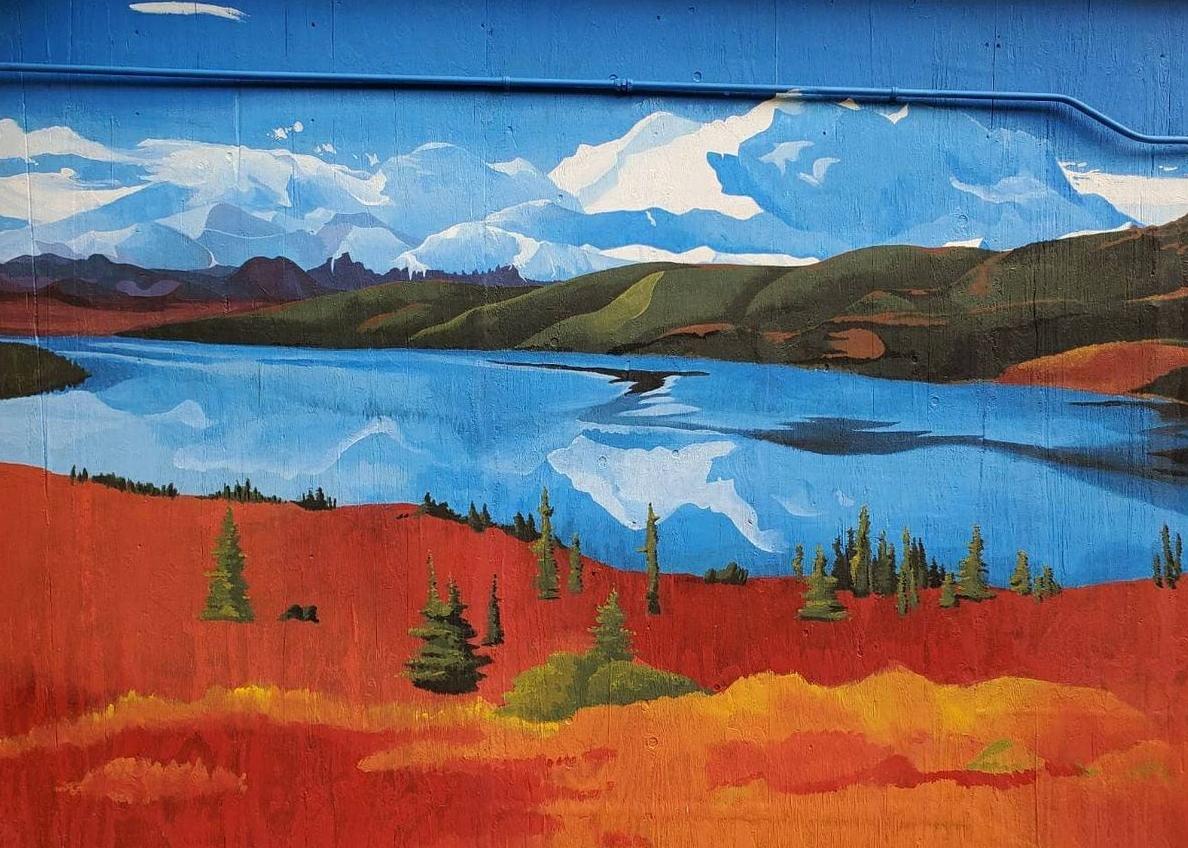 The mural of Denali and Wonder Lake is 7½-feet-high and 10-feet-wide. Photo courtesy Cedar Polta 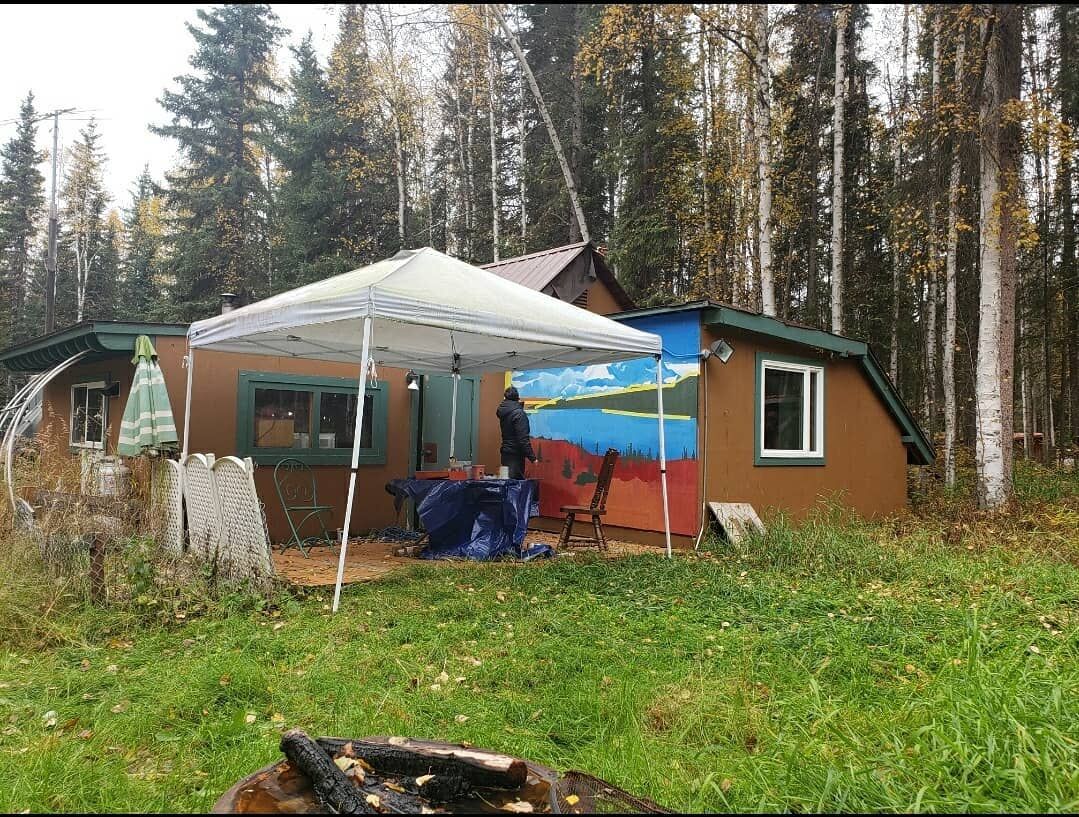 The mural now adorns a wall on the guest house. 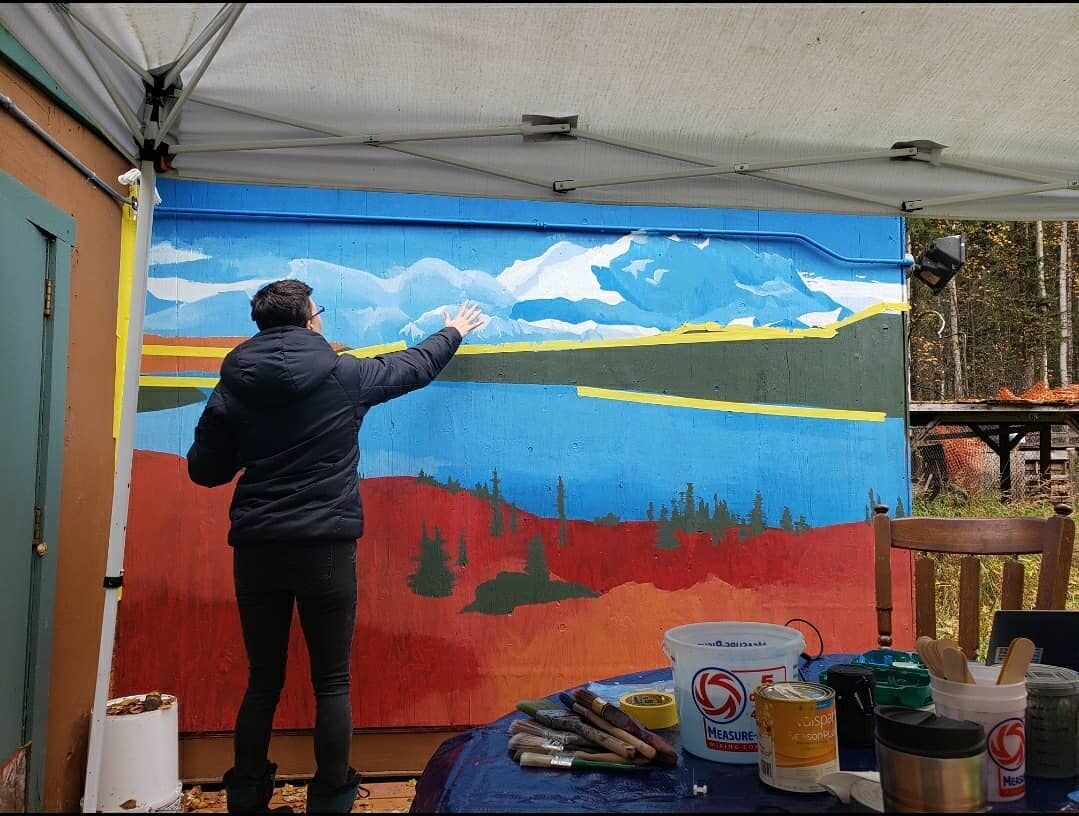 The mural of Denali and Wonder Lake is 7½-feet-high and 10-feet-wide. Photo courtesy Cedar Polta

The mural now adorns a wall on the guest house.

Liz Reeves de Ramos of Fairbanks now enjoys a daily reminder of one of the best days of her life.

An artist friend just finished creating a colorful 7½-foot-by-10-foot mural of Wonder Lake and Denali on an outside wall of her guest house.

Liz and her husband, Carlos, bought their property, which they dubbed R&R Acres, in 2016. It included a rundown guest cabin, which they have since renovated.

“Outside the cabin, off the back porch, there was a really faded mural of an Alaska scene with a wolf and caribou,” Liz said. “I don’t think I took a before photo, but it was super faded. We wanted someone to paint over that mural.”

Their friend, Cedar Polta, from Anchorage, volunteered to take on the project. Polta made two visits last summer to start the painting and then finished up the mural this past weekend. Polta is an attorney who works as a public guardian for the state of Alaska. But they like to paint mountains in their spare time.

Polta initially asked Liz and Carlos for their thoughts on what image they wanted on a mural. The couple gave the artist free rein to choose an image. Polta googled mountain images and came across a photo of Wonder Lake and Denali.

“This is one of my favorite places on Earth,” Liz said.

The couple has a special connection with Denali. They got married there in 2016 and stuck there when a landslide closed the park road. They ended up celebrating their wedding with everyone else who got stranded at Wonder Lake Campground, too. Those other campers — all strangers — became an important part of the celebration.

“It was memorable but perfect,” said the bride at the time. “You know, it was just another facet to this wonderful day that I’ll never forget. These strangers became a part of the most important day of my life. It was pretty remarkable.”

Liz grew up in the Denali area every summer. For many years, she operated the former retail store called Dizzy Lizzy’s. Now, she lives and works in Fairbanks as an investigator for the state of Alaska’s Adult Protective Services. On that wedding weekend, her family and about 40 invited guests divided time between Wonder Lake Campground and Skyline Lodge in Kantishna. In true Alaska style, they embraced the unforeseen circumstances and welcomed the “refugees,” as they called them, to the party.

In fact, the Reeves family cooked for everyone stranded there and then invited them to the wedding at a nearby park amphitheater. There were benches for everyone — invited and newly-invited, according to the mother of the bride.

Polta said it took about 40 hours to complete the mural. The artist worked under a canopy due to rain and used a blow dryer to dry the paint.

Polta didn’t realize they were painting the iconic Denali until the project was completed. In fact, Polta has never seen Denali up close, just miles away on the horizon from the Anchorage area.

“I just spend most of my time painting and being in the mountains in the Church and Hatcher Pass,” Polta said. “I don’t think of Denali that much. I don’t think I would have painted it if I knew what it was.”

That would have been too intimidating.

However, it was a project done out of love for a dear friend.