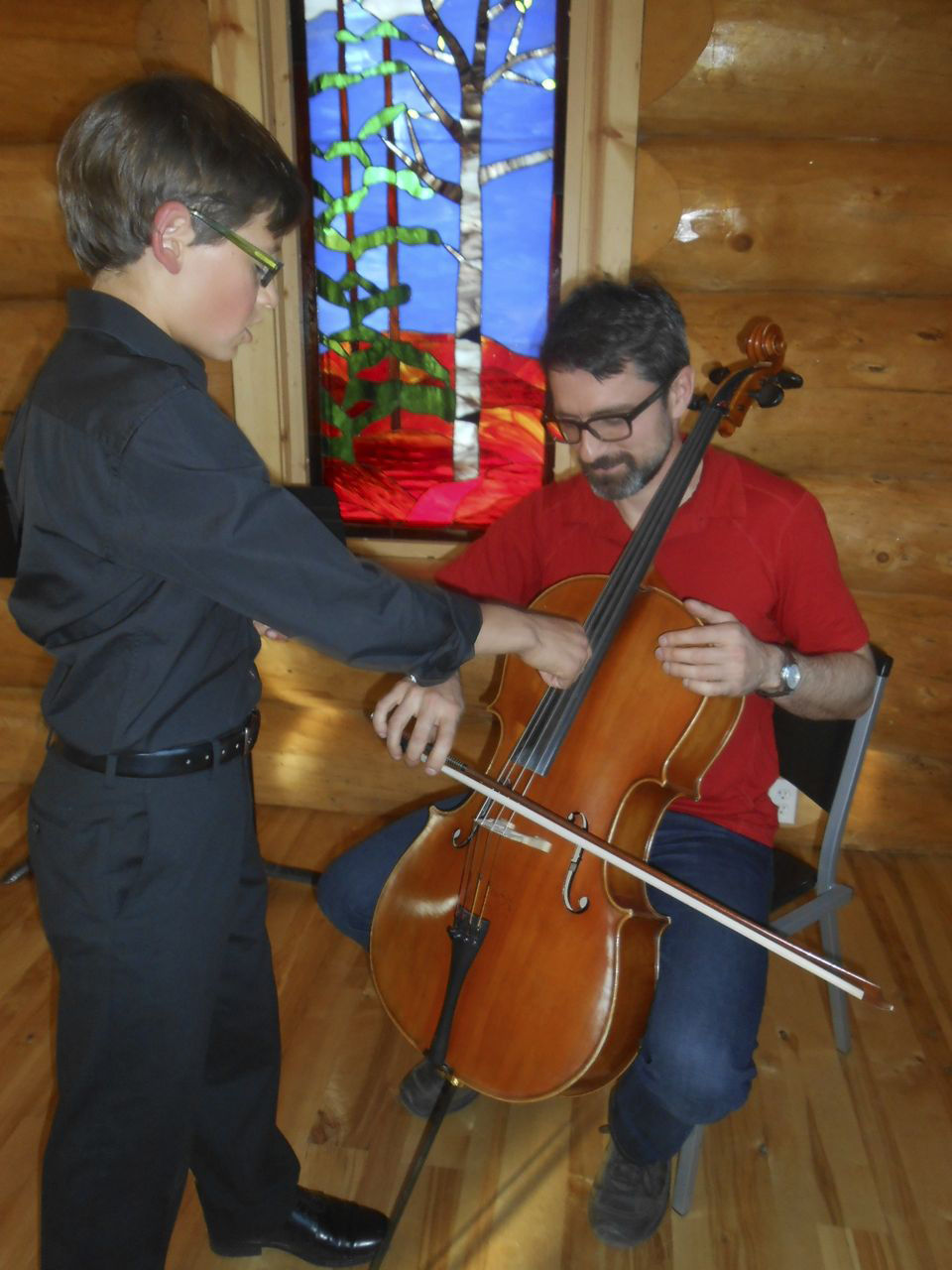 Van Levey, 14, shows Andrew Gertge of Denali, how to play the cello. 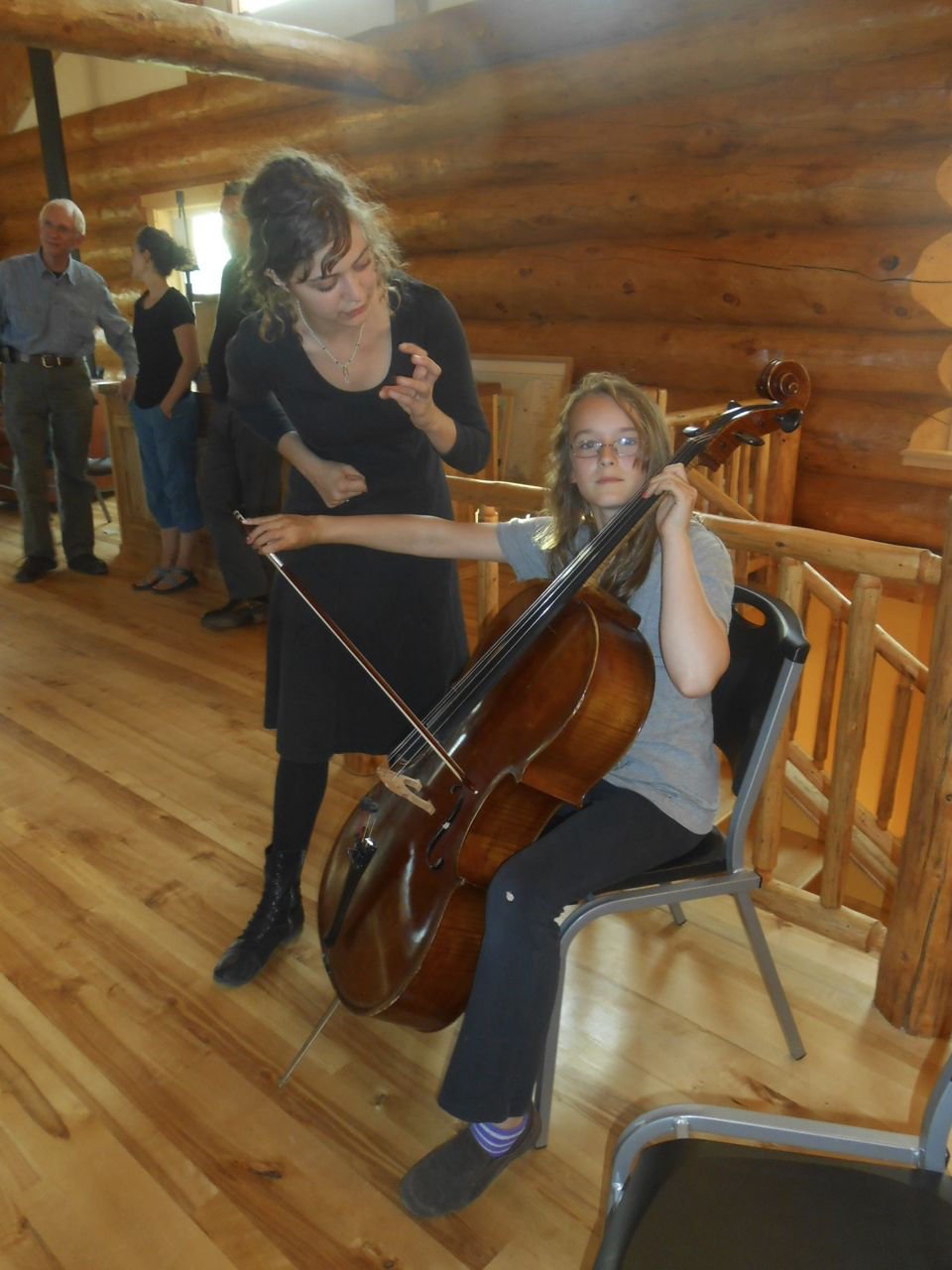 Hayley Zacheis works with Emma Tomeo, who tries her hand at playing cello. 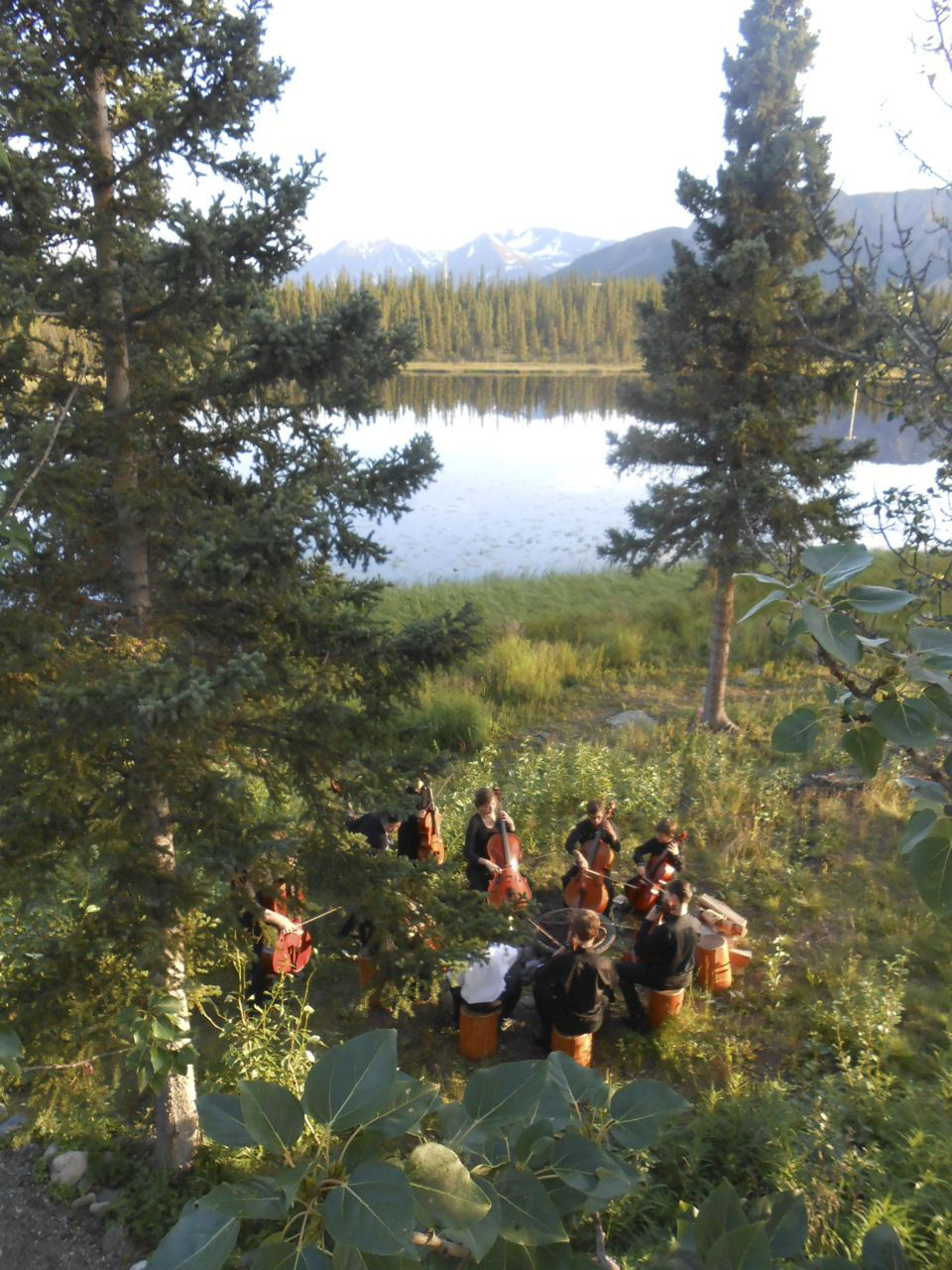 Members of the Alaska Cello Intensive gather around the fire pit at Tonglen Lake Lodge, to play a final piece together.

Van Levey, 14, shows Andrew Gertge of Denali, how to play the cello.

Hayley Zacheis works with Emma Tomeo, who tries her hand at playing cello.

Members of the Alaska Cello Intensive gather around the fire pit at Tonglen Lake Lodge, to play a final piece together.

FAIRBANKS — “Music happens when you let what is inside out. But what happens to music when you let the outside in?” Answer: the Alaska Cello Intensive.

When Mac Levey was three years old, his mother took him to a Fairbanks class to observe cello players. To her surprise, her rowdy son sat still for 20 minutes, mesmerized by the cellos playing.

“He wanted to do that,” Rebecca Levey said.

Mac Levey, now 16 years old, was one of the talented Fairbanks cello players who participated in this summer’s Alaska Cello Intensive. It was the first cello intensive in Interior Alaska, spearheaded by Mac Levey’s parents.

“The idea is that the more you perform, the better you get at dealing with things that might go wrong, like dropping your bow, tripping or whatever,” Rebecca Levey said.

But when the eight hours of lessons were over, the cellos were put away and the musicians went outside for a different kind of play.

The premise for this intensive, according to Rebecca Levey, is that “you are actually an entire human being.”

“The music that you express, it comes from somewhere other than just the practice room,” she said. “That has to do with every fiber of your being. And so, it makes sense you have a life, in addition to being able to read notes.”

There are lots of music intensives nationwide, but many of them don’t take this into account, she said.

According to Rebecca Levey, Sarah Koo described the intensive as the “healthiest cello program she has ever seen.”

The other thing Rebecca Levey did that was unique: she invited parents to come along.

“When parents participate, it changes things,” she said. “It’s so successful and transformative.”

“I decided to take that to the music realm,” she added. “What happens if parents participate and do music and get out on the river?”

It was a huge success, she said.

The 12 students — two from Kenai and 10 from Fairbanks — spent part of their time at Denali National Park.

They took a bus into the park, saw Mount McKinley free of clouds, counted 21 grizzly bears in one day and even watched a bull caribou charge the bus.

It was the first time any of the students had visited Denali National Park.

They took time out to perform individually and as a cello choir at Tonglen Lake Lodge. See the video on the Daily News-Miner Facebook page.

Students then invited audience members to try their hand at playing the cello. Before long, lots of new musicians from the audience learned to play “Twinkle Twinkle Little Star.”

The intensive was so successful the plan is to do it again.  It is hoped that cello students from Outside will sign on as students for the fall intensive

The fall intensive is scheduled for Nov. 6-9 and will include one master or lesson class, an orchestra class, technique and performance class, piano coaching and one ensemble coaching class per day, plus an overnight excursion to The Lodge at Black Rapids.

Traffic is being slowed way down during the construction of two new weigh stations at 358 Mile Richardson Highway.

But the good news is traffic flow will not be restricted during morning and evening rush hours: 7-8 a.m. northbound and 4-6:30 p.m. southbound.

“There were some lane closures and over the weekend, some traffic backed up,” said Meadow Bailey with the Department of Transportation. “We’ll let traffic through more frequently from here on out during the weekends. And we are adding additional signage.”

HC Contractors, out of North Pole, is clearing the areas of the $11.1 million project.

The purpose of the weigh stations is to inspect the size and weights of commercial vehicles.

“This is a requirement of interstate commerce,” Bailey said. “We try to put them in areas where there is a high volume of traffic.”

At that particular spot, DOT reports 25,000 vehicles per day. Twelve percent of that is truck traffic.

Completion of the weigh stations is expected in December 2015.

Contact community editor and columnist Kris Capps at kcapps@newsminer.com, in the office at