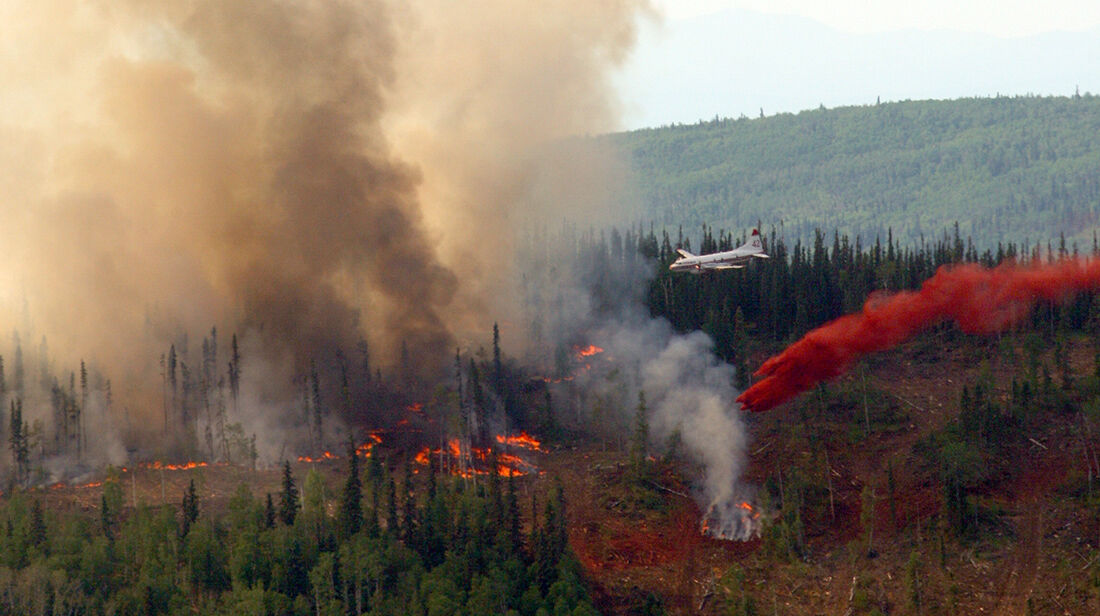 A plane drops a load of retardant on a fire burning about four miles north of Mile 325.75 Parks Highway on Tuesday, June 25, 2013. 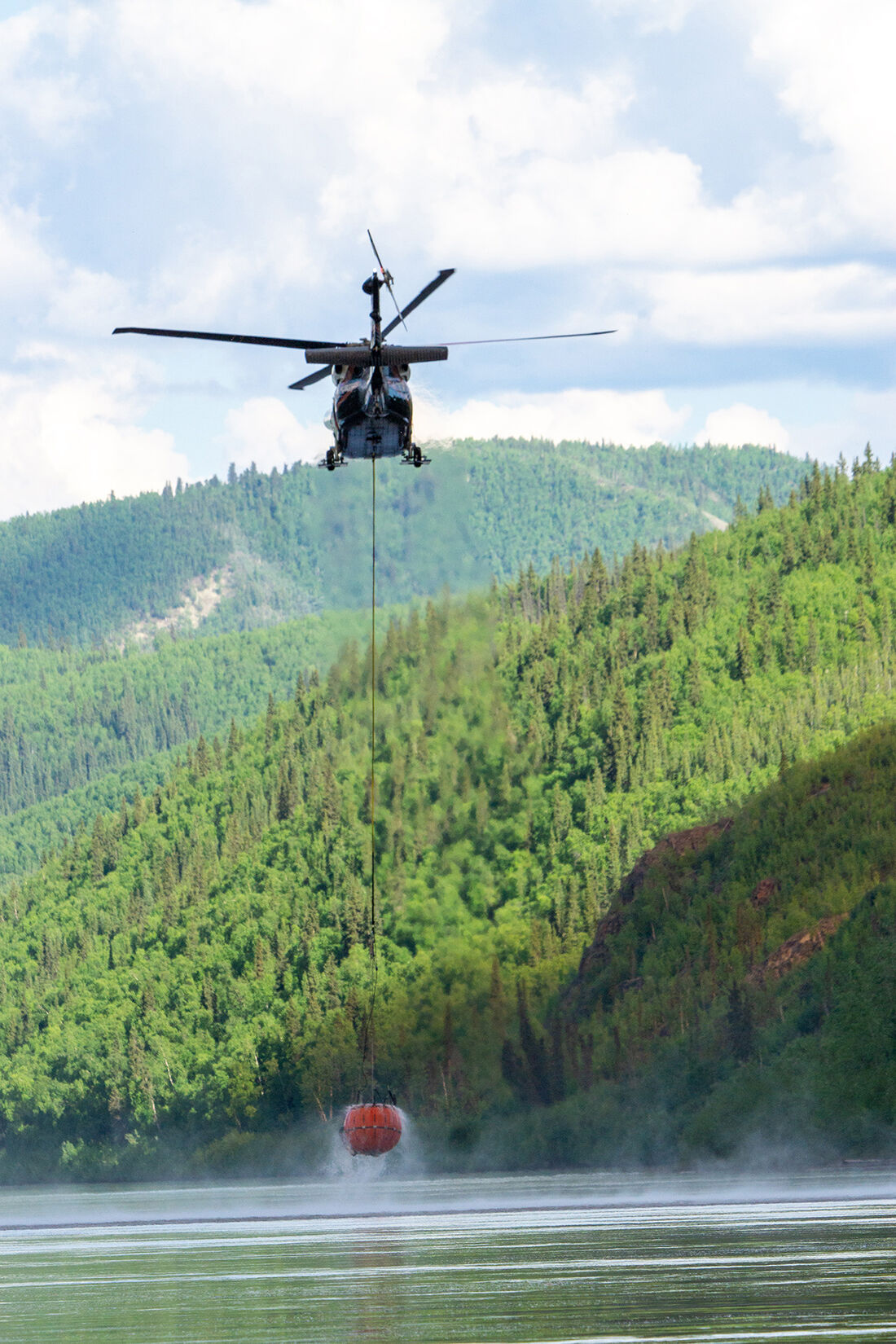 June 2020, a helicopter is filling a water bucket from the Yukon River to fight the Isom Creek fire five miles north of the Dalton Highway. 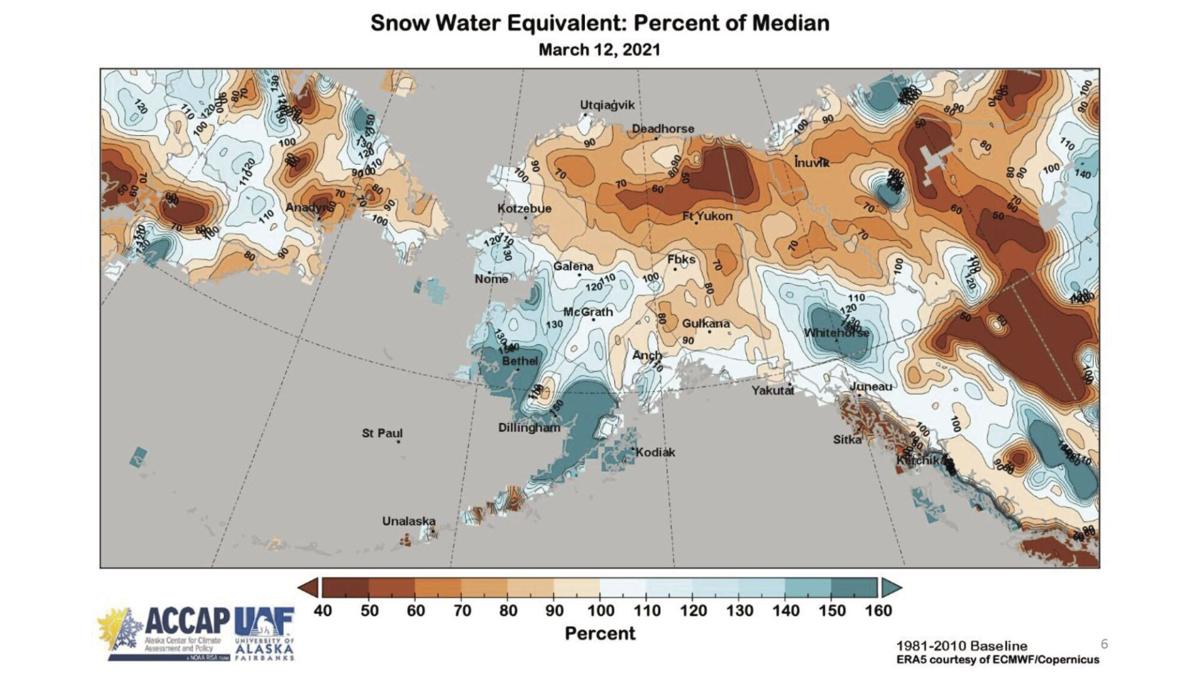 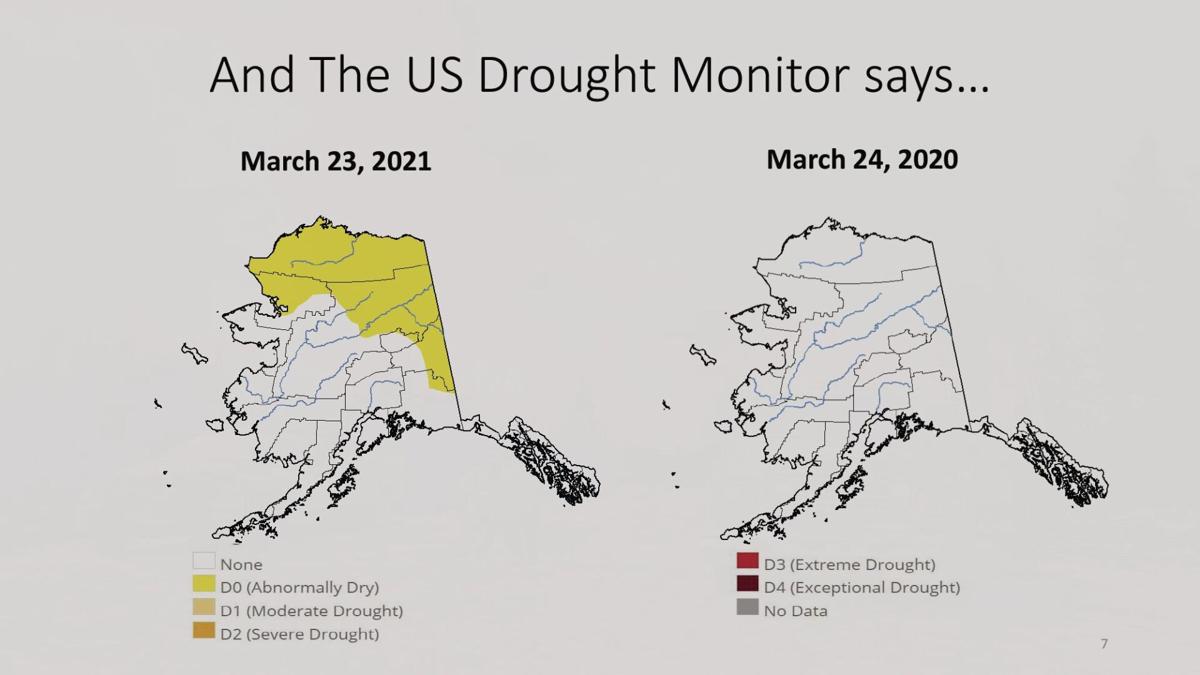 A plane drops a load of retardant on a fire burning about four miles north of Mile 325.75 Parks Highway on Tuesday, June 25, 2013.

June 2020, a helicopter is filling a water bucket from the Yukon River to fight the Isom Creek fire five miles north of the Dalton Highway.

It’s this time of year when Alaskans anxiously look at snowpack — but especially fire managers and meteorologists who are trying to predict when the wildfires start.

April 1 marked the official start of fire season in Alaska, and so far, based on snow depth, weather forecast, global climate patterns and the dryness of the soil, 2021 doesn’t promise to be too fire-heavy or too easy.

“We won’t have a soaked season, but the tamed season is not likely either,” said Eric Stevens, fire weather program manager at the Alaska Interagency Coordination Center, which organizes resources and provides forecasts for wildland fire management and suppression across the state.

Alaska wildfires usually follow several patterns. As snow melts, the first wildfires begin in April when dried grass ignites from human activity and spreads by wind, explained Chris Moore, a fire behavior analyst at AICC. The peak fire season comes around solstice when flammable layers of soil dry out during long, warm days and catch fire from lightning. Later in July, if the weather is warm and dry, the fire season can extend, and cooler fall temperatures normally slow fire activity.

“One season might be super wet, the next one can be super busy,” Moore said. “Variability is what is going to be the main factor.”

This year, melting has not started and more snow is falling, which means the ground will probably clear later, delaying the start of the fire season, Stevens said. However, a late start of the season doesn’t necessarily mean fewer fires.

“Snow might delay the fire season, but it’s the weather that dictates the fire,” said Beth Ipsen, public affairs specialist at the Bureau of Land Management Alaska Fire Service, one of the three fire protection agencies in Alaska.

The Climate Prediction Center’s forecast into early summer calls for drier and cooler than normal conditions over Southcentral Alaska and the Panhandle, and wetter and warmer weather over Northwest Alaska. However, Ipsen warned that “weather forecasts can change day by day“ and “predicting what kind of conditions we’ll have during the summer is very difficult in April.”

While overall the winter snowfall has not been heavy across Alaska, snow depth varies across the state. The deepest layer covers the ground along Bristol Bay and Nulato Hills, while the thinnest cover is at the Brooks Range, eastern Interior and the Panhandle.

The thin cover could make the area susceptible to human-caused fires, Ipsen explained, given the dry vegetation and a source of ignition.

In terms of water content of snow, the U.S. Drought Monitor shows no areas of Alaska in drought status, but much of the Interior and Northwest Alaska are categorized as “abnormally dry.”

“That makes us reluctant to say it’s going to be the low season,” Stevens said

Ipsen added, that, again, “How dry things are totally changes by the time summer rolls around.”

Besides local conditions, the fire season in Alaska is affected by global climate patterns such as El Niño Southern Oscillation, a variation in winds and sea surface temperatures over the Pacific Ocean. This weather pattern has two phases: El Niño and La Niña, according to the U.S. agency National Atmospheric and Oceanic Administration. During El Niño, warm water is pushed back toward the West Coast of the Americas including Alaska, while during La Niña, the warm water is pushed off the West Coast toward Asia, bringing cold water to the surface and a cool phase to our state.

“All the biggest fire years — anything over 2 million and small change acres — those have all been El Niño years,” he said.

This year, we are in a weak La Niña phase that might transition to a neutral phase, which means that “a truly record-breaking wildfire season” and “something horrible like 2004” is unlikely, Stevens said.

Another bit of fire forecasting comes from the University of Alaska Fairbanks and the National Science Foundation Established Program to Stimulate Competitive Research. In one project, researcher Cecilia Borries-Strigle looks at temperature, precipitation, winds and moisture and uses multi-model seasonal predictions to calculate the flammability of organic material in the soil.

For 2021, her forecasting tool shows that across the Interior and in Fairbanks, “it is going to be an average or below-average year for fire activity,” Borries-Strigle said.

To sum up the forecasting data, the cooler phase of El Niño is balanced by dry patches across the state, the forecast for warmer summer temperatures and no strong signal for precipitation. All of this results in normal fire potential, according to the Alaska Monthly Fire Potential Outlook published at AICC on April 1.

While the data is imperfect, meteorologists still gather everything that can be useful and present fire managers with a broad seasonal forecast that predicts whether fire behavior will be above normal, normal or below normal during each upcoming month. That information helps fire managers decide how they are going to allocate their resources while they prepare for the summer.

“By the time they get here, things get wet,” Moore agreed. “With the long-term forecast, it can change how fast we get the resources here,” Moore said.

The seasonal fire weather forecasting will be updated as the season develops.

“Every year has its own personality, and 2021 will reveal itself,” Stevens said. “We will be watching as best as we can to identify the personality.”

To help residents make sure their homes are safe, the Alaska Wildland Fire Coordinating Group created a booklet “Firewise Alaska” that contains the checklist below.

Within 15 feet of the house

- Remove all conifers and dry vegetation.

- Edge the building with small plants, flowers or gravel.

- Thin or clump conifer trees to ~15 feet between extending branches.

- Remove all dry or dead vegetation.

- Remove all dry or dead vegetation.

- Maintain lawn at 3” or less and keep it well watered.

- Dispose of flammable debris from your property.

- Keep areas under stairs and decks free of debris.

- Clean the roof and gutters of needles, leaves, and branches.

- Provide a 15 foot clearance between your chimney and nearest tree branches.

- Roof should be fire resistant; If not, keep clear of leaves, mosses and lichens.

- Screen all exterior vents, such as attic openings.

- Address marked with reflective numbers at least 4” high on house and driveway.

- Driveway should be 12 feet wide with a turnaround for emergency vehicle access.

- If you have a well, consider installing a pump and generator.

- Keep storage areas clean; Do not accumulate things like rags and newspapers.

- Check spark arresters on all motorized equipment; Store 30 feet away from structures or inside garage.

- Use non-combustible cribbing for fuel tanks with a 10 foot area cleared around the tank.

- Stack firewood at least 30 feet from house and clear 10 feet around pile.

- Do not stack firewood under trees or on downhill side of property.

- Identify Safety Zone where family meets in an emergency.

For more information, go to http://forestry.alaska.gov/Assets/pdfs/home/firewise09.pdf.