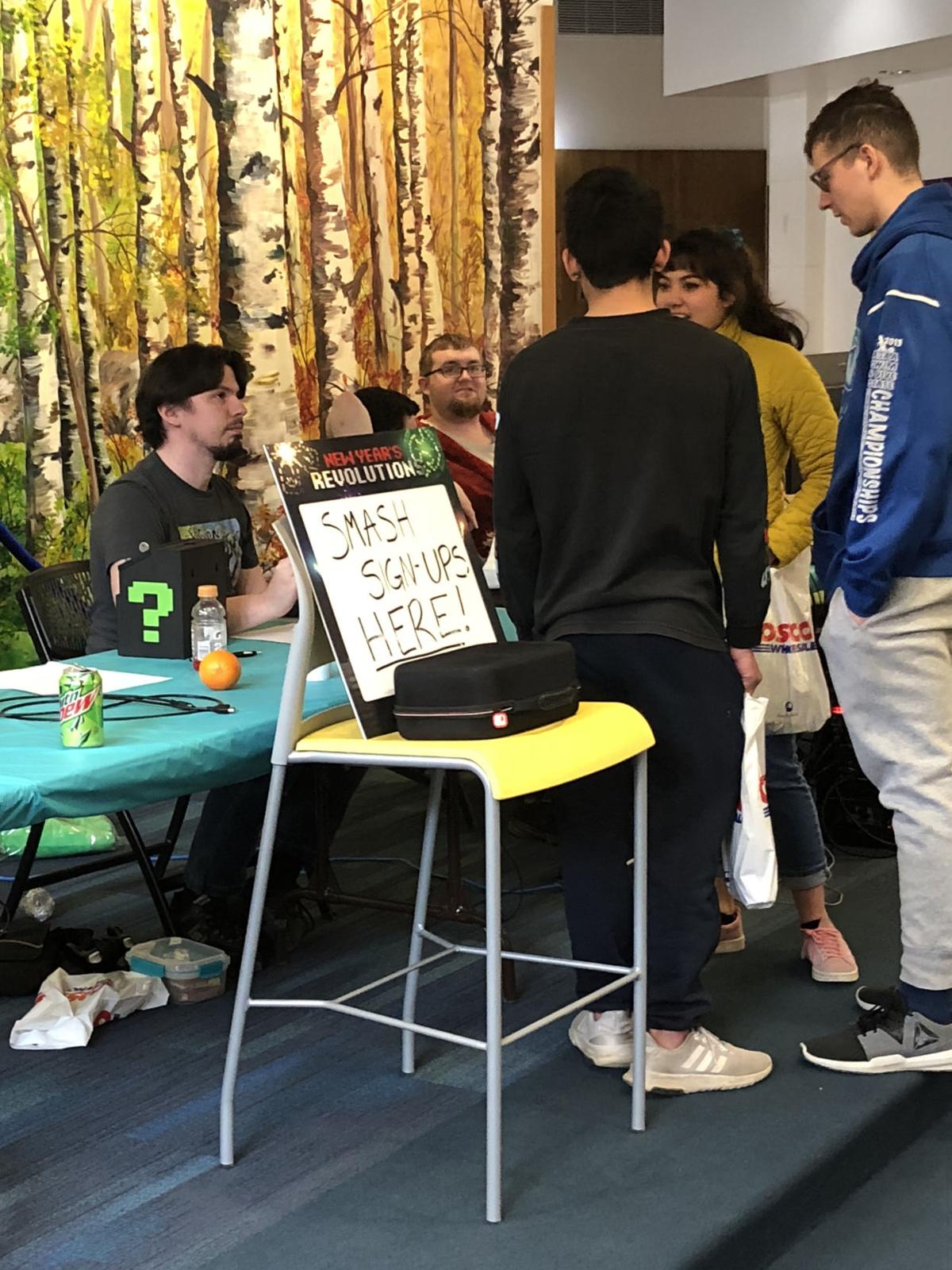 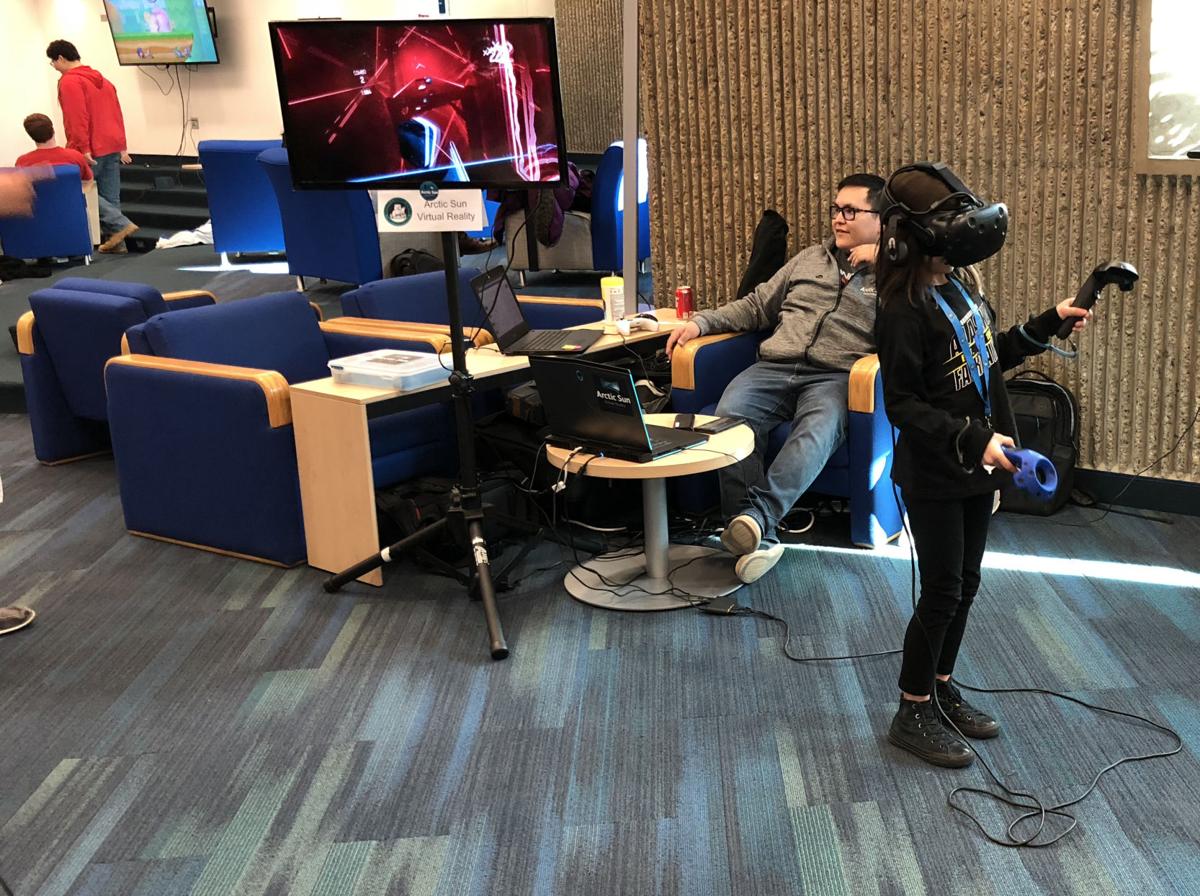 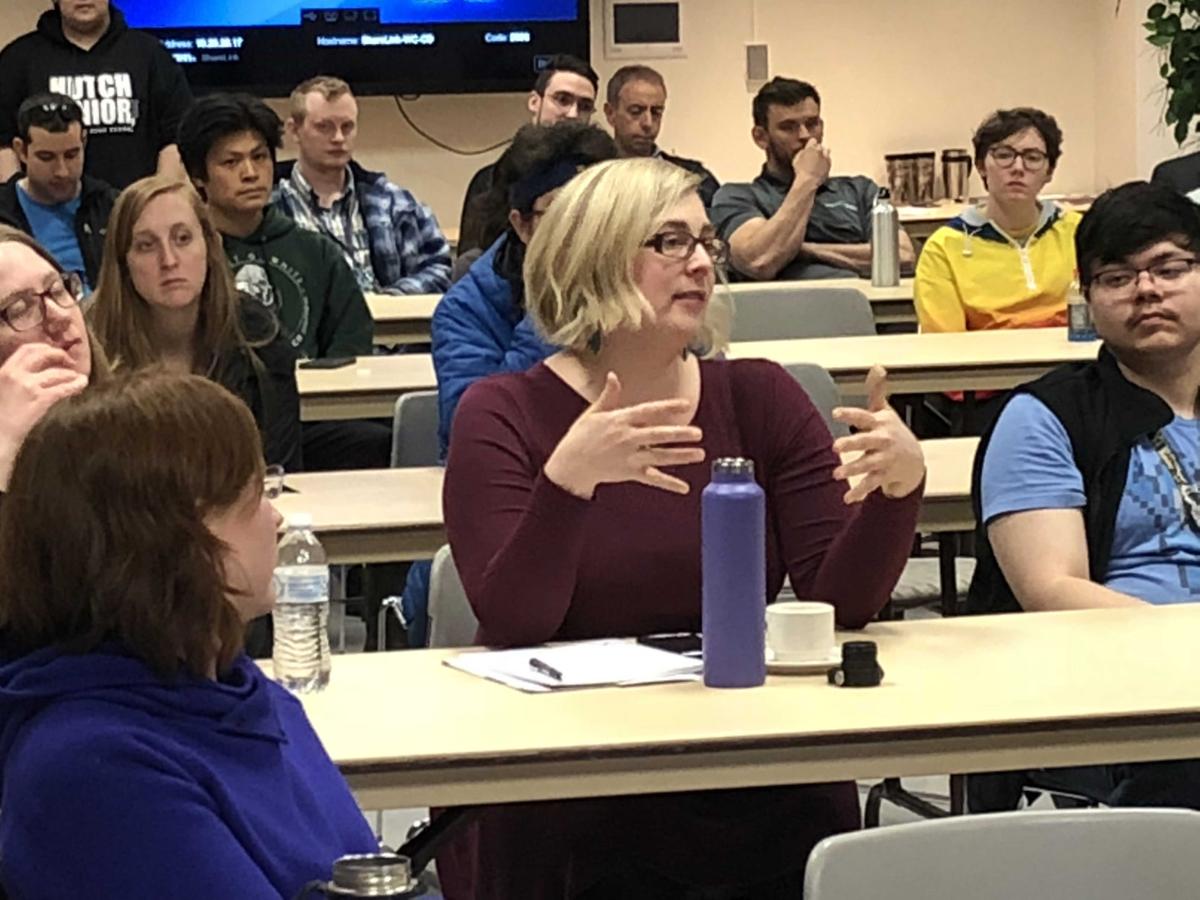 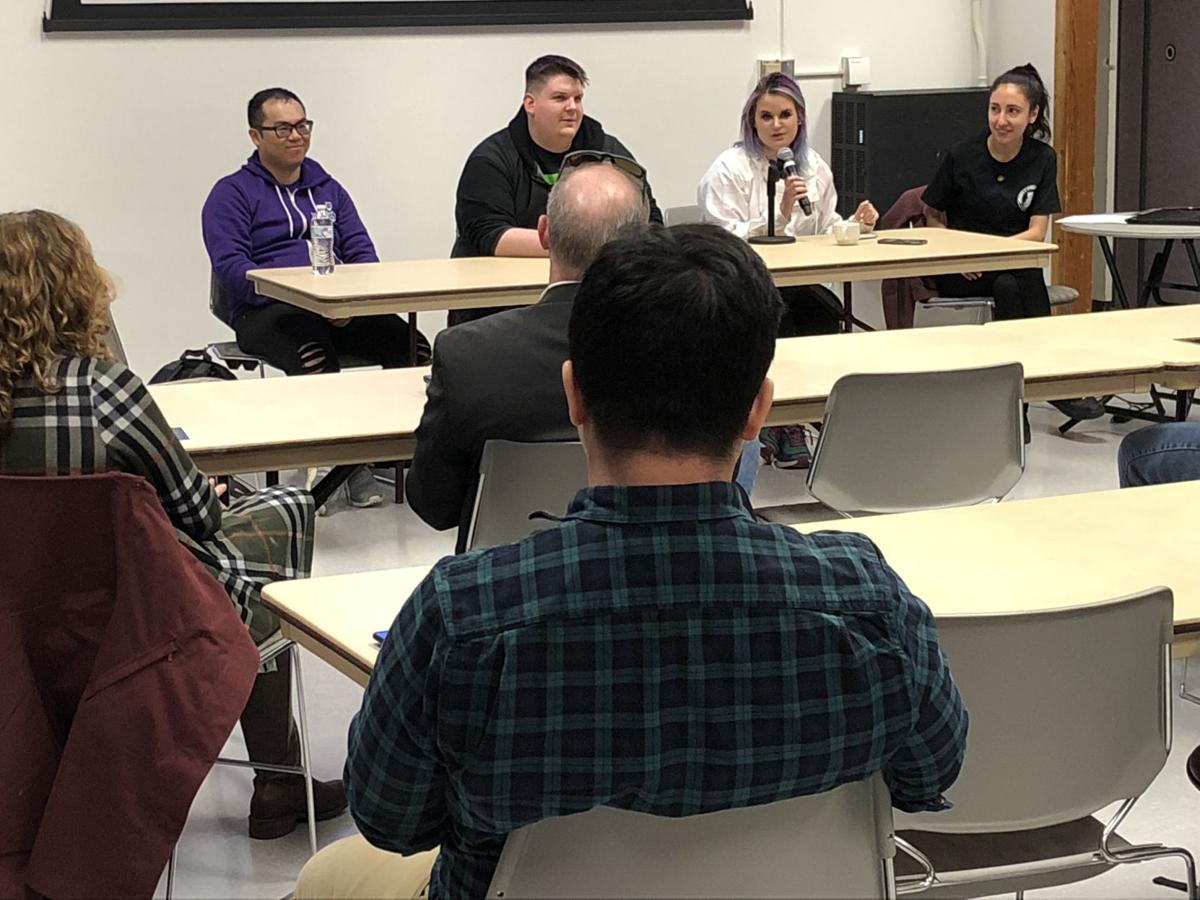 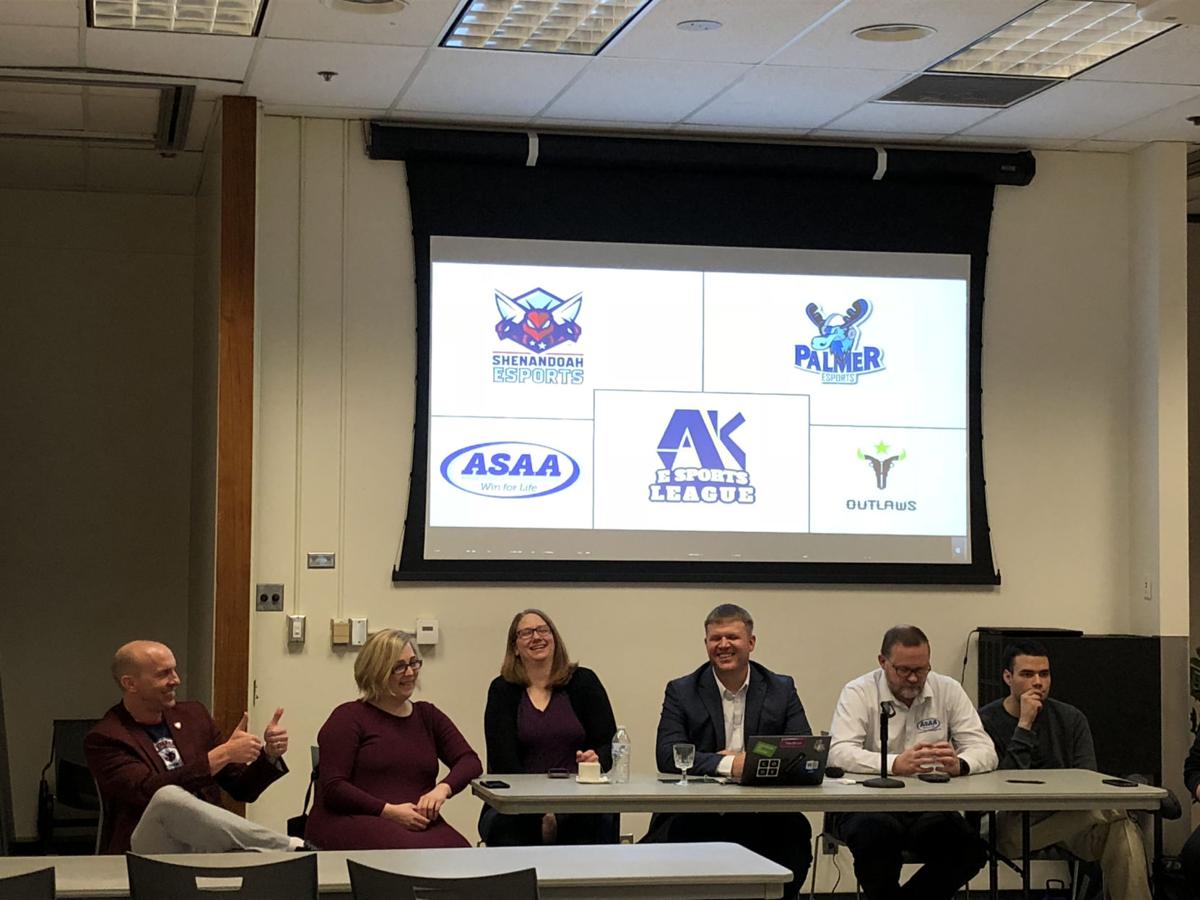 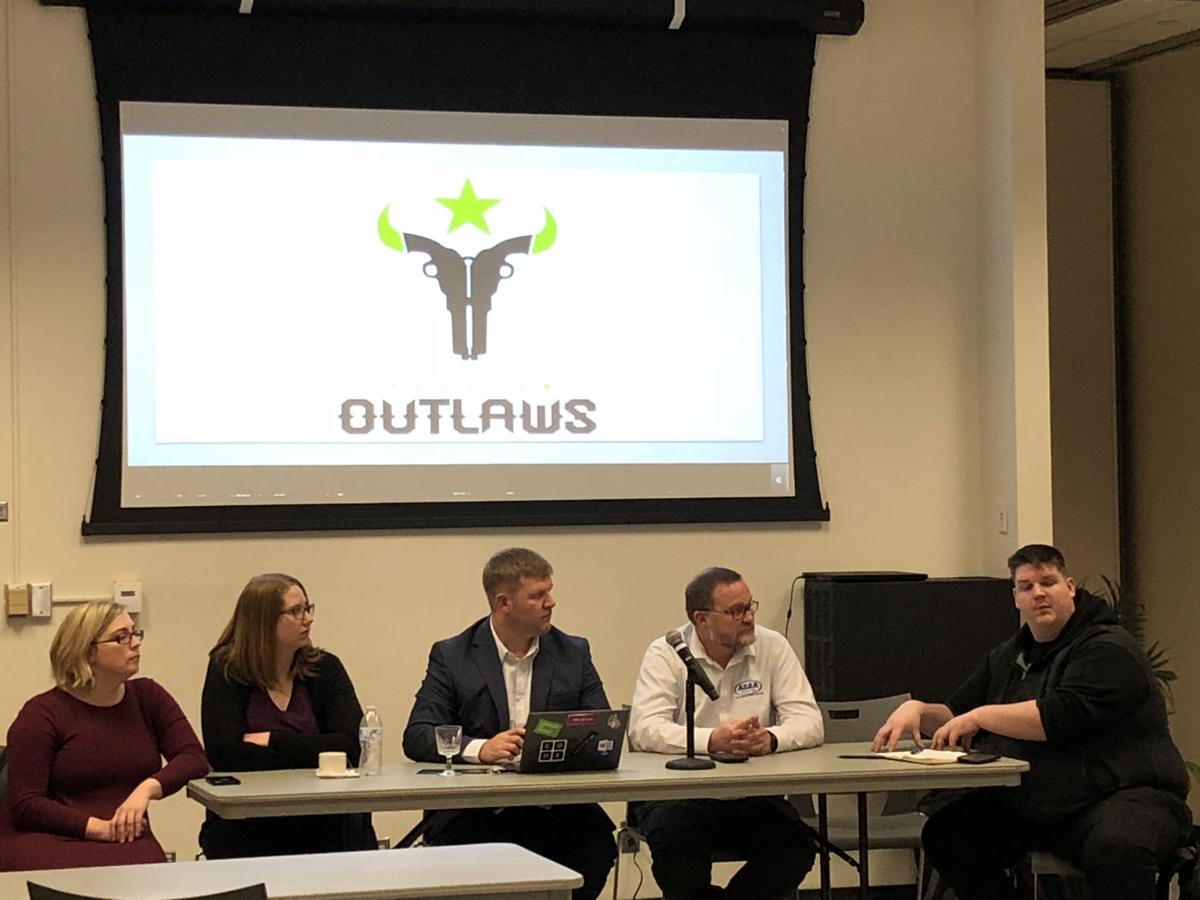 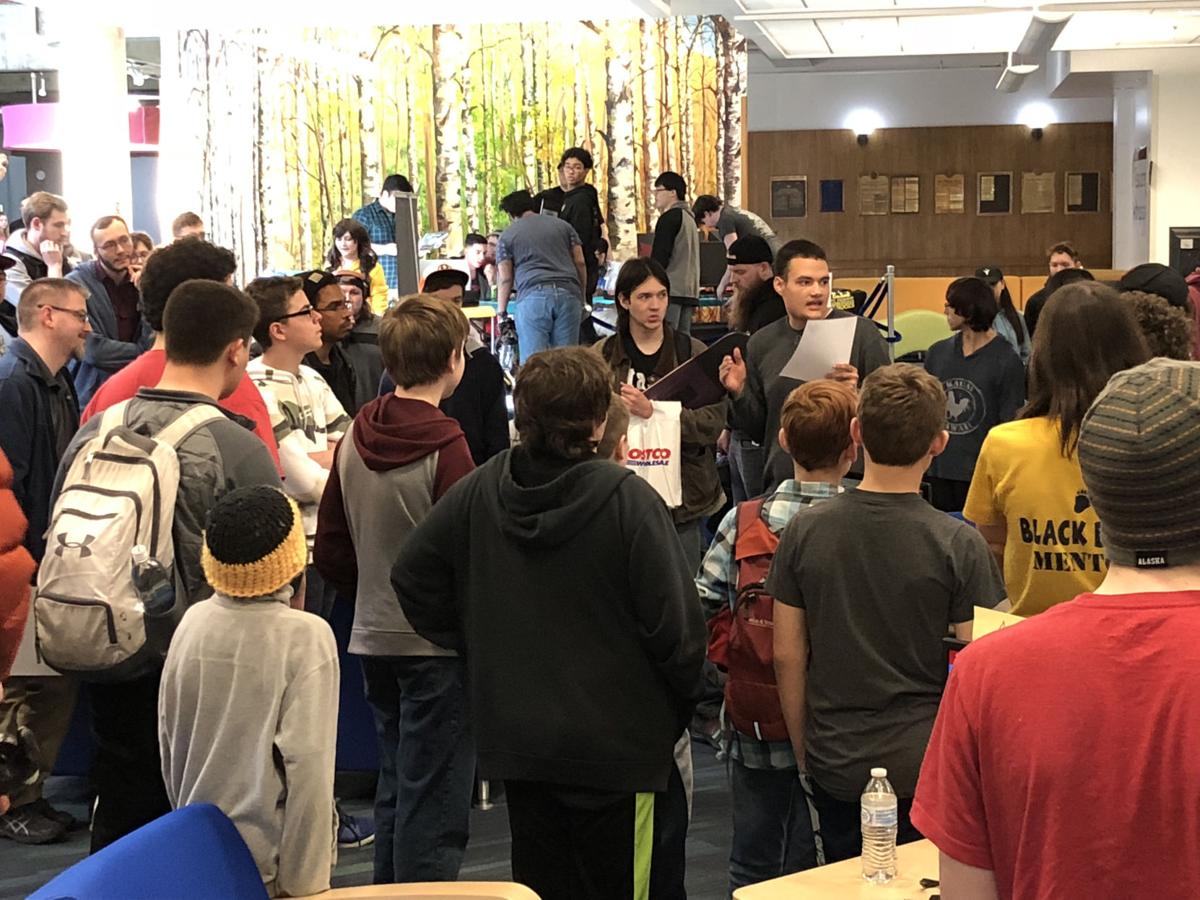 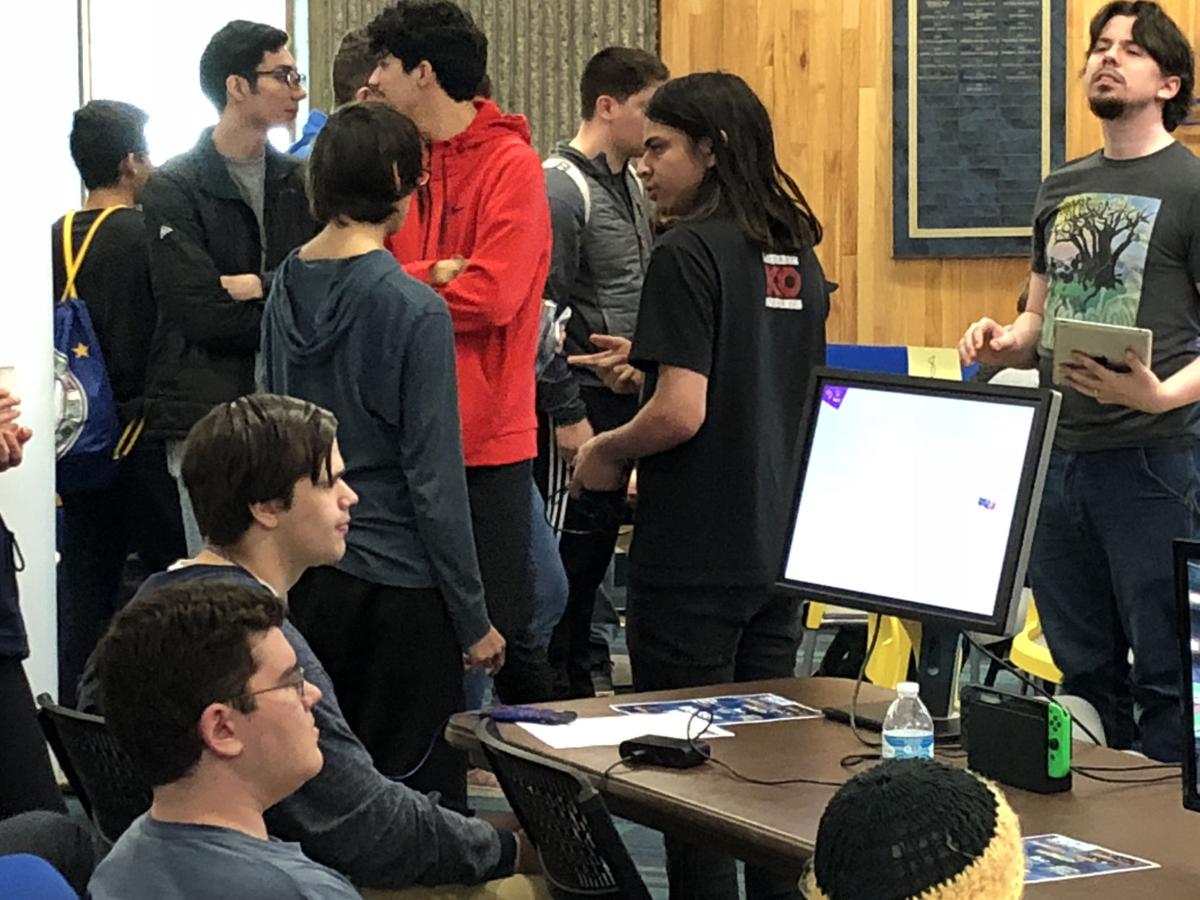 FAIRBANKS — About 300 people came to the eSports and Gaming Summit to discuss careers in the gaming industry, interact with industry professionals and enjoy a day of video games at the university.

Keynote speaker Jimmy Chan took to the lectern at the University of Alaska Fairbanks Wood Center after a morning of breakout sessions. Chan is from Texas, where he works at Twitch, a livestreaming platform that broadcasts esports competitions.

“Esports is a connective tissue — there’s a place for everybody,” Chan said. “It doesn’t really matter what you’re studying; you can be a part of esports.”

Chan’s presentation focused on the Twitch Student Program, aimed at giving students job skills they can use in the gaming industry. For example, he said, a marketing student could learn how to display ads with the livestreaming platform, while an art student could design banners and logos for web pages.

He also discussed how school partnerships with the platform could stem from the program. Through a partnership, Chan said, Twitch could help universities make merchandise and generate revenue as people tune in to watch gameplay—and work with the university to develop curriculum around the esports industry.

“So all of these functions will be available through all department channels,” he said.

Breakout sessions were held upstairs throughout the day. The main message from the Careers and Jobs in Gaming Roundtable was networking. Panelists went one-by-one to give advice for branching into the esports industry.

Cricket Carlson is a community manager with Rooster Teeth, a major entertainment company in the industry. She attended UAF for her bachelor’s degree.

“When I started out going to school here, I knew I wanted to work in games,” Carlson said.

She said her biggest advice is to get out of the mindset of “C's get degrees” and added that it's important to build a resume, network with the industry and volunteer at events.

John Spiher, director of partnerships with the Houston Outlaws, said that to keep the industry growing, professionals have to foster interest from people in marketing, videography, management and other fields.

“There's going to be more opportunities now than ever before to be in the industry,” he said.

Nichelle Henry, a co-coach of esports out at Palmer High School, asked about resources teachers could point students towards to start learning about streaming and other jobs in gaming, taking notes as panelists answered her.

“A lot of people in game development network on Twitter,” Carlson said, also directing Henry to look into footage from annual game conferences.

Shelby Carlson, Cricket's sister, was among the participants. She said the panel touched on careers that have visible online portfolios, such as the digital arts.

“But what about people that don't have those types of portfolios?” she asked. Specifically she pointed toward fields such as accounting and engineering.

Spiher emphasized, again, to network through events and ask organizations about positions with accounting, finance or other fields. Spiher also answered a follow up question about crafting a cover letter and resume tailored to getting a job in the industry.

“It's taking that passion and applying it to unique ways for you,” he said. “Those are the most interesting.”

At the esports Teams and Leagues session, the discussion focused on esports leagues in schools and the professional circuit.

Luke Meinert, founder of the state high school league esportsAK, said that to build a league, people have to gain support early. His personal example stemmed from the Mat-Su school district, where the superintendent supported his idea. The district now has nine teams with esportsAK.

“I wanted to capture a new group of students that hadn’t participated in other things,” he said. He added that esports has a low cost of entry and offers various career pathways.

Nichelle Henry, who attended the earlier breakout session, was one of the speakers, alongside her fellow teacher and coach, Sarah Kitzan.

“Building (an esports team) at the Palmer High School was an exercise in patience, I think for us and the students,” Henry said.

She added while students were waiting on gaming equipment, she was learning about streaming platforms and industry vocabulary.

Kitzan said oftentimes what happens is school will conclude, and there will be time to set up, download game patches and practice before matches start at 3:15 p.m.

Palmer’s team competed for state championships and nationally against a school in Connecticut during the fall season.

“We are in the process right now of considering sanctioning esports,” he said.

He said he sees esports falling into an “activity” category rather than a traditional “sports” category.

Ultimately, he said, sanctioning esports would put it on par with other school activities with rules and regulations for participants. They would include student eligibility and which games could be played.

“I don’t think we would get any school support to sanction what I think would be considered a first-person shooter game,” he said. Strickland said the subject was personal to him, as he experienced a school shooting while working at Bethel.

Joey Gawrysiak, director of esports at Shenandoah University, said he attended a high school where a shooting occurred and understands why schools don’t want to approve first-person shooter games. He posited other games students could play competitively, such as “Rocket League.”

At Shenandoah University, Gawrysiak said, esports fall under “academics, separate from traditional sports and activities. The university is offering a degree in the area this fall.

“We do have 35 varsity players. … we compete against schools across the country,” he said.

Gawrysiak said there is only one level of esports, rather than divisions. This means hundreds of schools compete against one another. He said he’d like to see divisions on the collegiate level.

Spiher was at the session as well to discuss professional esports, specifically his work with the “Overwatch” League team, the Houston Outlaws.

A variety of professionals are working with competitive players, Spiher said. They have managers, nutritionists, coaches and more just for day-to-day activities. The team practices about eight hours daily to develop gameplay strategies.

“These guys are pros. We take their entire day, every single day, to better them in and out of games,” Spiher said.

The lower floor of the Wood Center was filled with personal computer setups, consoles and industry booths.

Arctic Sun Virtual Reality, which is owned by James Polluck and located off of Airport Way, had a line of participants waiting to play games such as “Beat Saber” and “Super Hot.”

Gravity Gaming and Rooster Teeth had tables — staffed by volunteers and employees — where people could stop by for swag or find out more about merchandise and equipment.

The gameplay portion of the summit concluded with a “Super Smash Bros.” tournament. Seventy-three people were signed up to battle it out.

“We had people fly up from Anchorage to compete, actually,” said Ryan “Bunny” Anderson, vice president of the esports and gaming club at UAF. The club handled setup for the equipment and the tournament.

Lucas Acker, an area streamer, streamed the tournament online, where it will still be available at twitch.tv/alaskasmash.

Len “Slow-Hand” Ahgeak won the tournament and walked away with a $250 gift card, courtesy of the gaming club. Anthoni “Cell” Gilbert came in second ($100) and Tendai “MW” Shambari took third ($65).