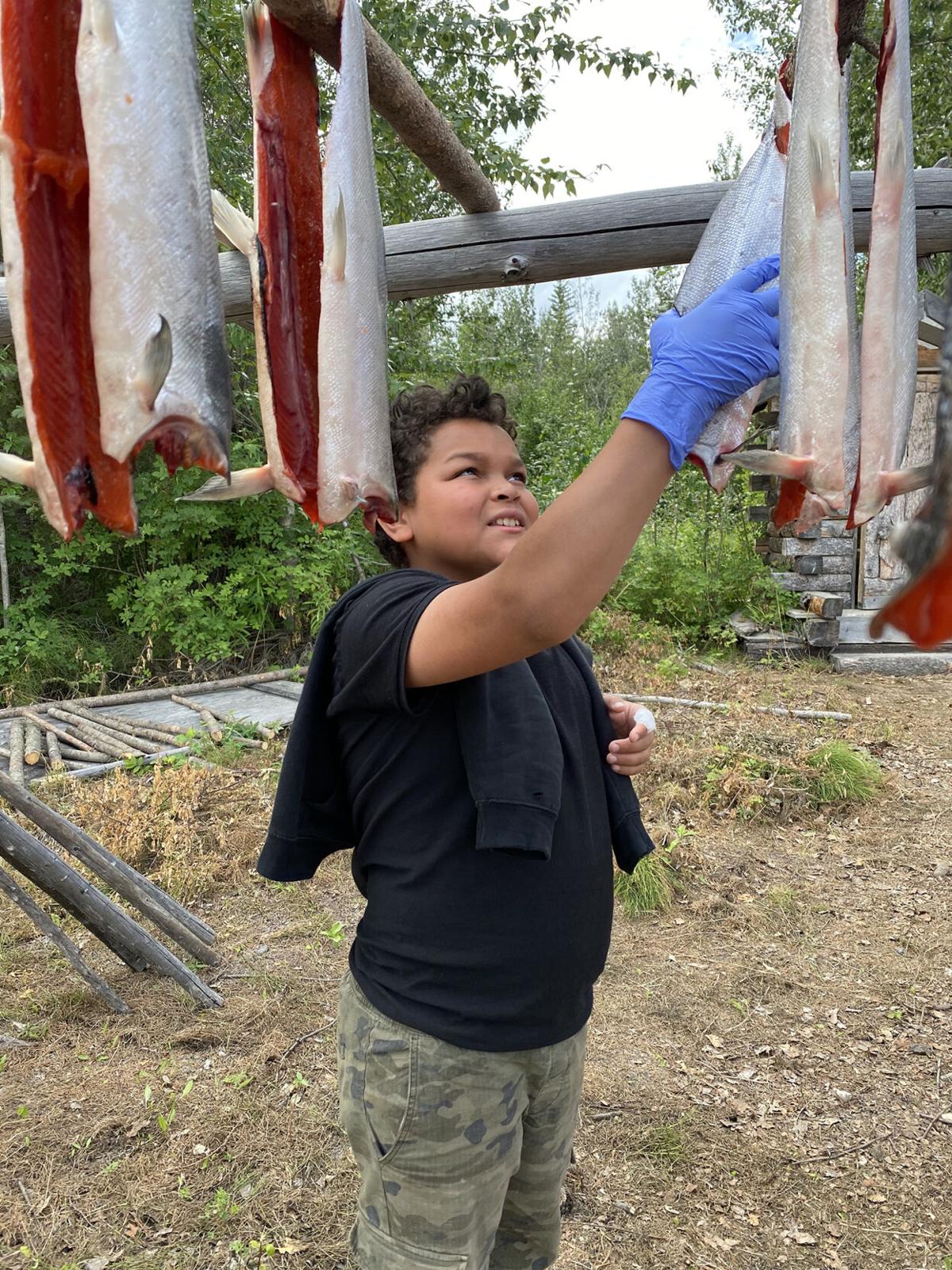 Freddy Gadson cuts and hangs reds (sockeye salmon) to be jarred during Nenana Fish Camp. The reds were procured in Kasilof and delivered to Nenana by Charles Wright Sr. and Eva Dawn Burk. 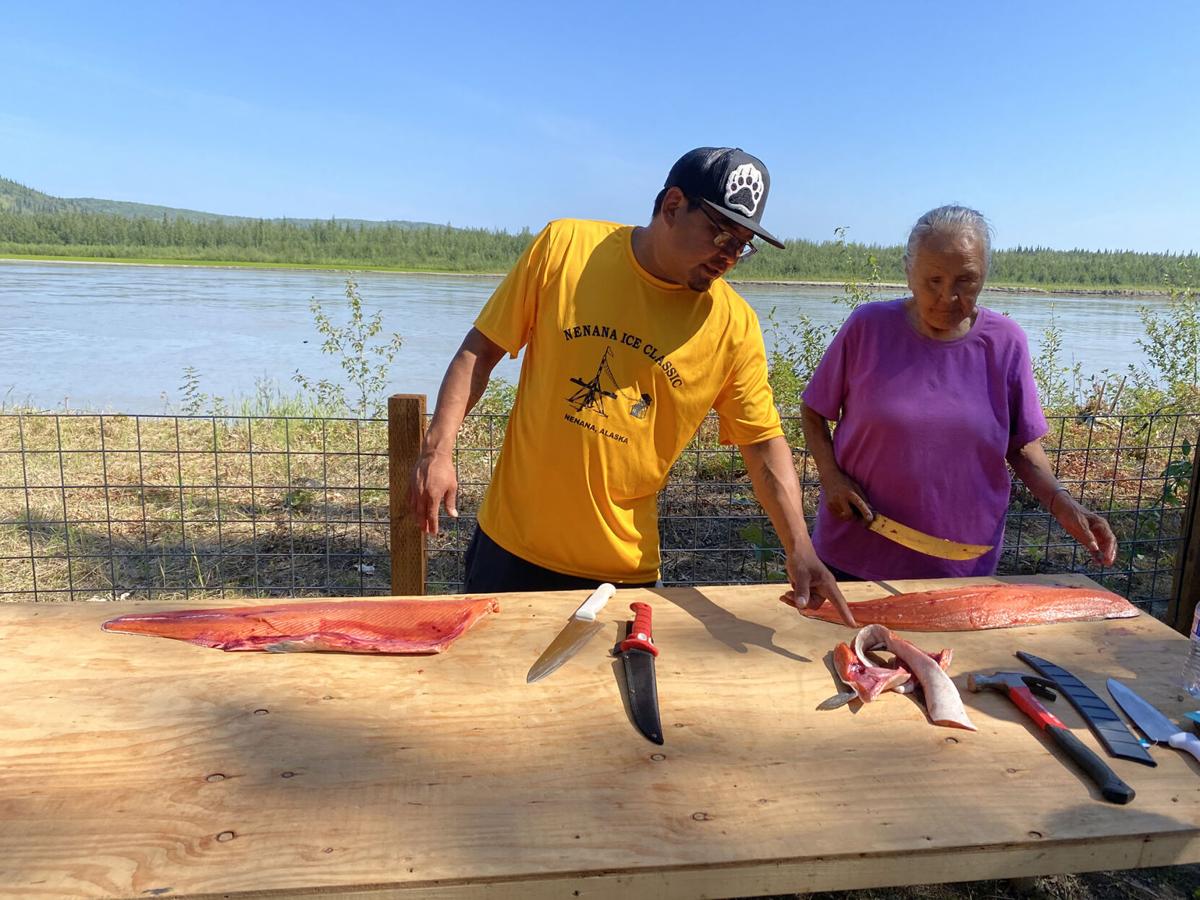 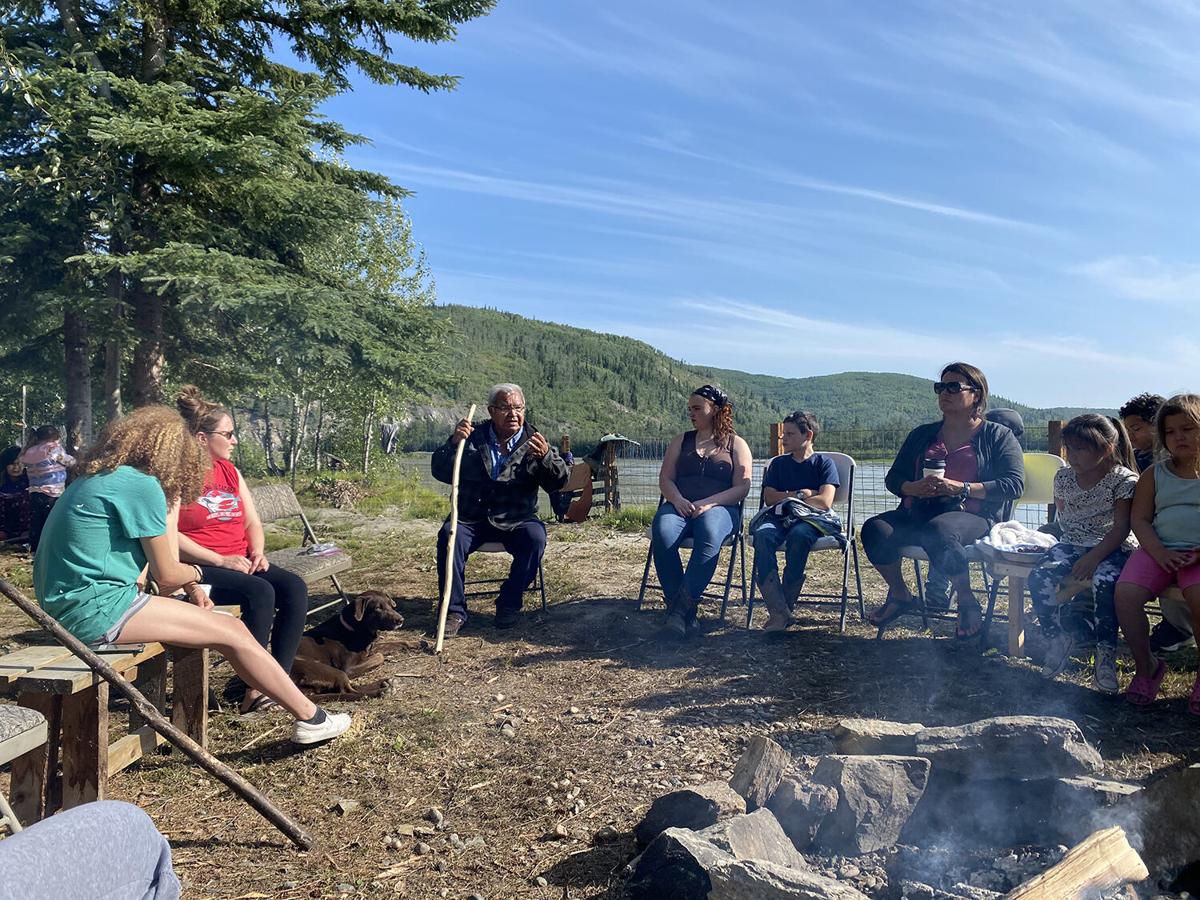 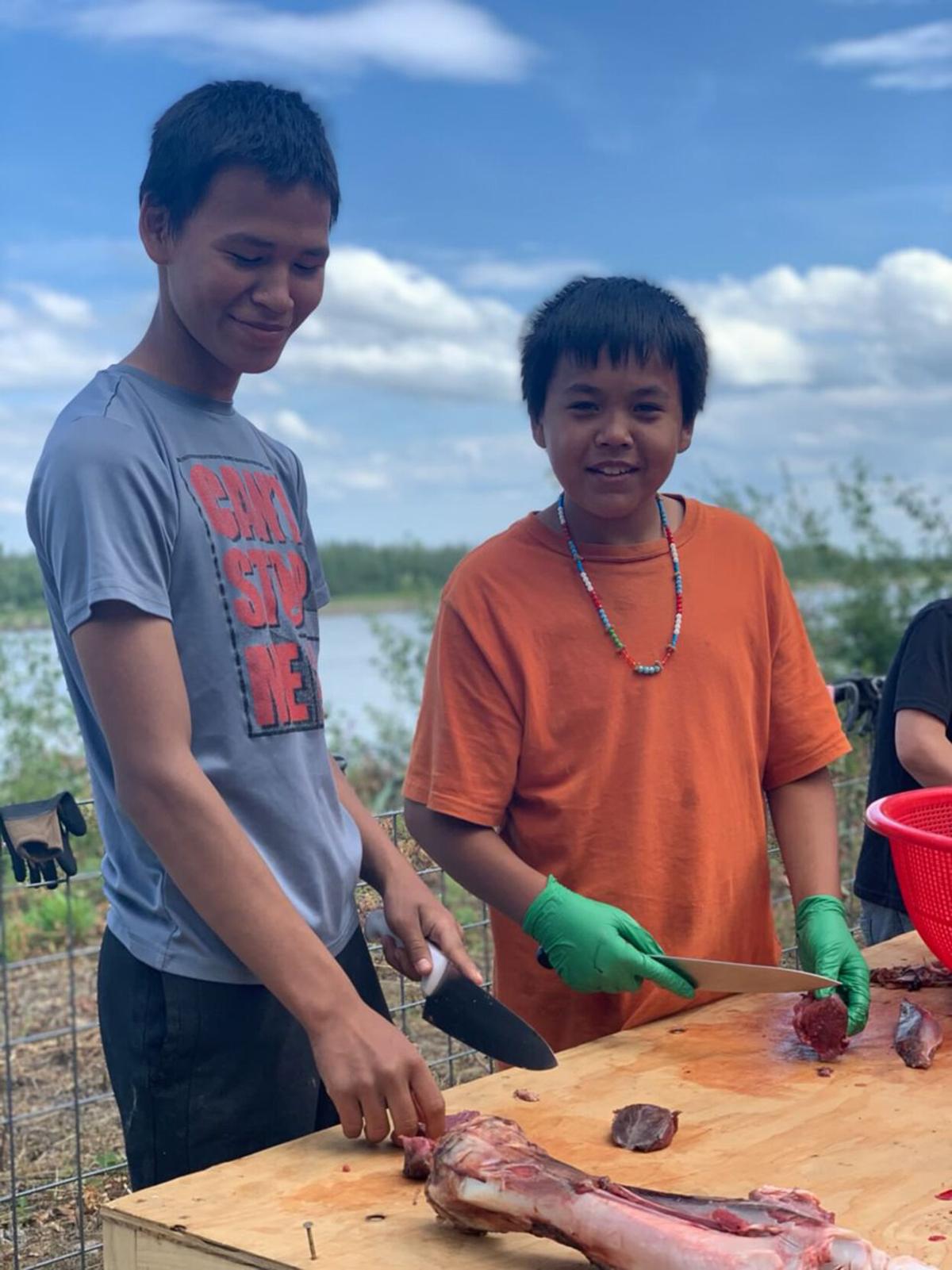 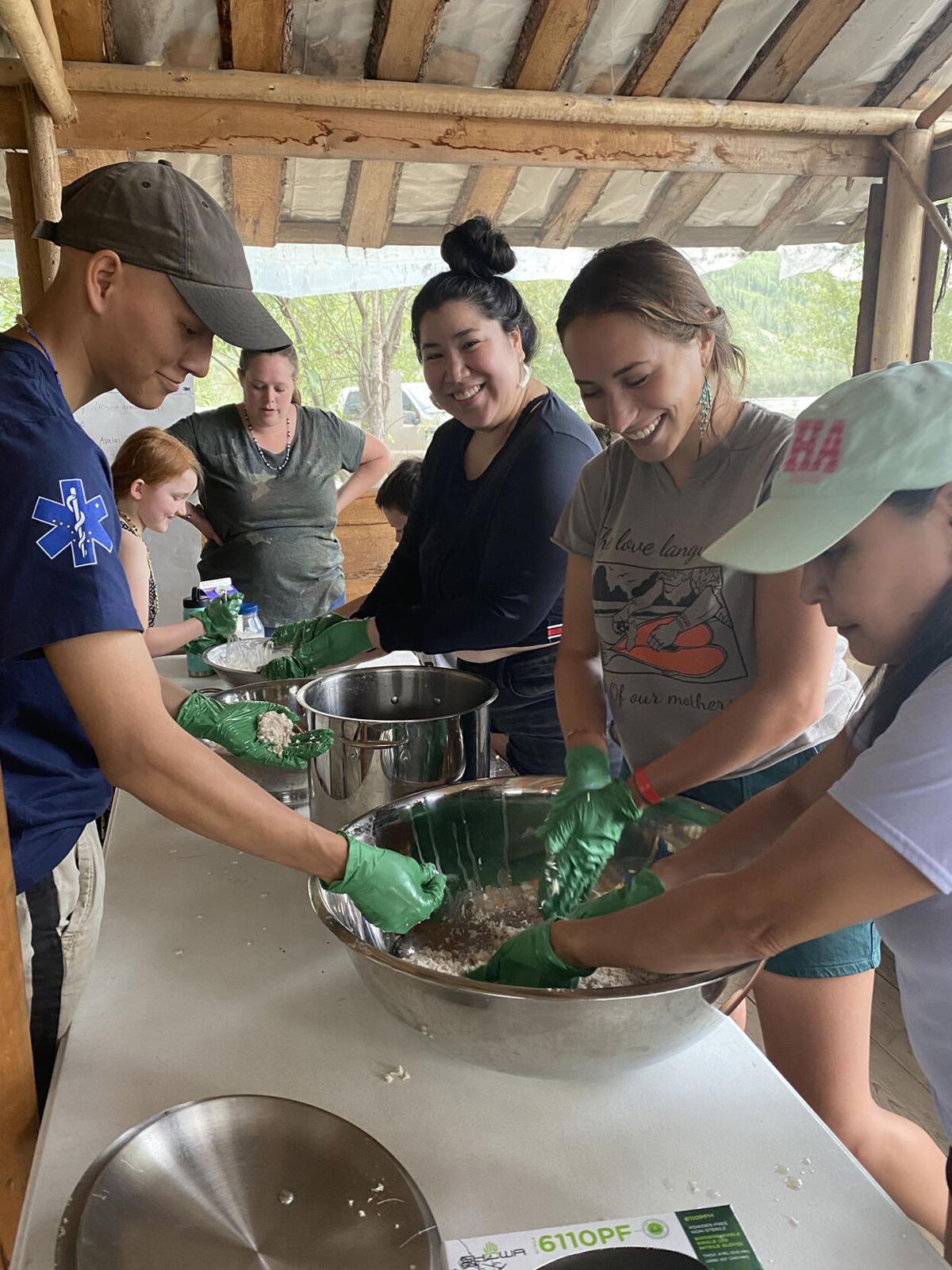 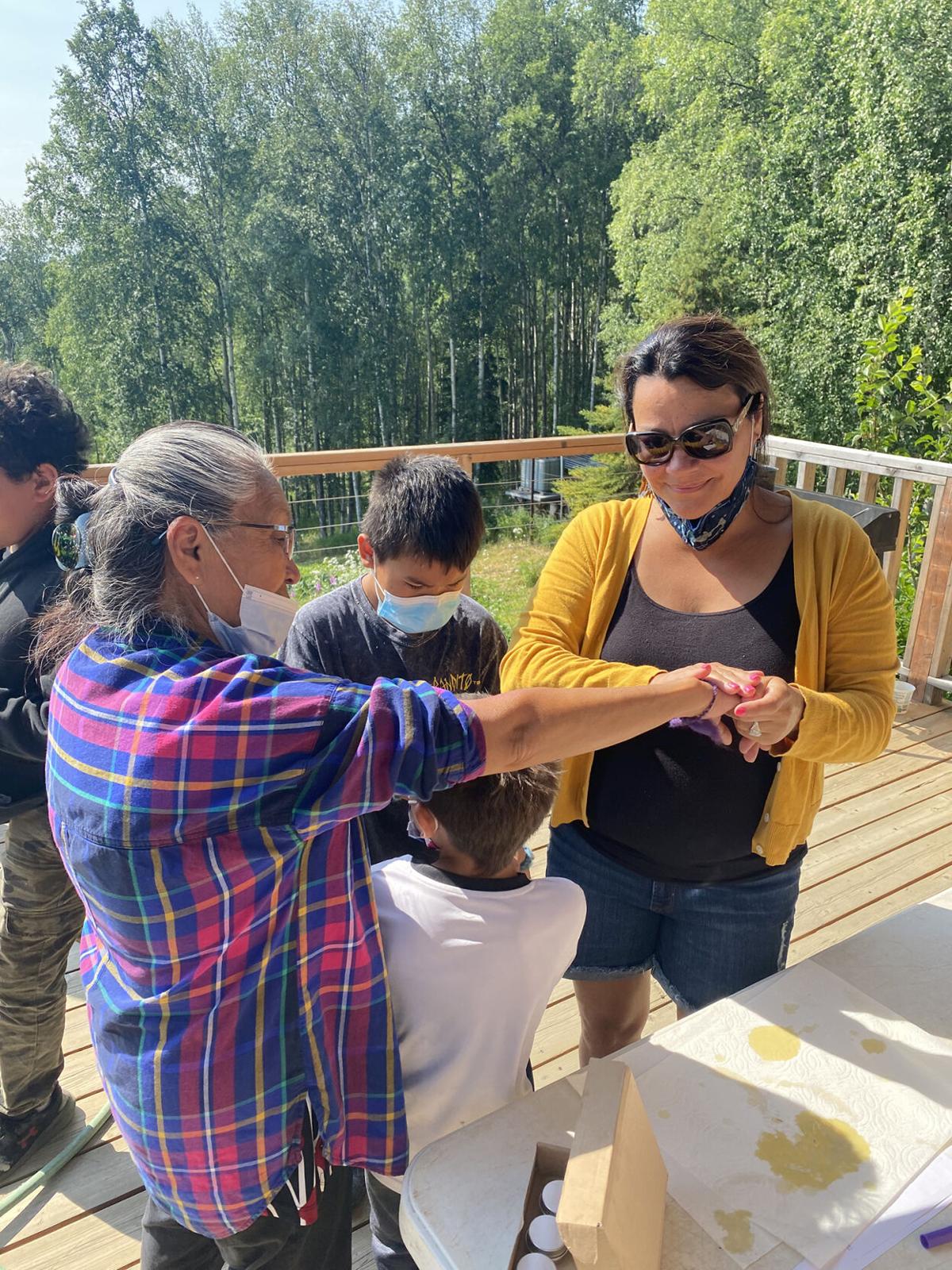 Dr. Jessica Black applies spruce pitch salve to Eliza Winfrey's arms. The spruce pitch was gathered at camp and made into salve during a field trip to Calypso Farm.

Freddy Gadson cuts and hangs reds (sockeye salmon) to be jarred during Nenana Fish Camp. The reds were procured in Kasilof and delivered to Nenana by Charles Wright Sr. and Eva Dawn Burk.

Dr. Jessica Black applies spruce pitch salve to Eliza Winfrey's arms. The spruce pitch was gathered at camp and made into salve during a field trip to Calypso Farm.

When Eva Burk was a child, she lived at fish camp in the summer and on the trapline in the winter. She was about 9 or 10 years old when that lifestyle became unsustainable for her family, and they moved to Nenana.

Spearheading this year’s Nenana Fish Camp brought back a lot of memories for her and a new enthusiasm to share traditional knowledge and skills with young people.

The end of her semi-nomadic childhood also signaled the beginning of being disconnected from traditional ways of living, she said. She felt like her health and wellness suffered.

“It wasn’t until 2018 that I went to fish camp again,” she said. “I realized I wasn’t alone. A lot of people my age didn’t have any idea how to fish, how to preserve fish.”

The local camp has been ongoing for about 10 years, she said.

This year, she fulfilled that goal and spearheaded the Nenana Fish Camp. She told the estimated 25 young attendees she was learning right along with them.

First priority was to find salmon for the camp. Organizers ended up with a combination of Red Salmon from Kasilof and King Salmon from the Alaska Department of Fish and Game in Emmonak.

“We made half-dried, score the fish into one-inch sections, smoke for a couple days, take it out, then throw it in the oven or throw on the fire,” Eva Burk said. “It’s really a delicacy. We only gave half-dried to the elders.”

“We also made a little bit of dried fish,” she said. “We let it dry all the way in the smokehouse.”

Some of the salmon was put in jars — 96 jars, in fact. Donated silver salmon was pickled.

“The kids also cut up a moose leg for moose soup,” Burk said. That was enjoyed during the community potlatch.

This all grew out of her new mission — to reduce fire hazarding Alaska by using spruce beetle-killed trees as fuel for biomass-heated greenhouses and to grow food in these greenhouses year-round in Arctic communities.

Last year, we was awarded the Indigenous Community Fellowship from MIT Solve, an initiative of the Massachusetts Institute of Technology. She began working on a sustainable business model. That includes training community members so projects can remain sustainable locally.

The experience has inspired her to plan future camps, throughout the year.

“I feel like starting out with fish camp, and now working our way into doing a fall camp and spring camp,” she said. “Part of spring camp would be seeding.”

She wants to start prepping the old hockey rink in Nenana as a community garden and she is hopeful the city will allow her to use that space. But more important than the infrastructure, are the people who will take care of it.

“We can design and build any piece of infrastructure we want,” she said. “But we have got to train our people to use it, give them a sense of ownership. We need to build it with them.”

A tradition she was sure to include in Nenana Fish Camp was gift giving.

“Everyone worked on all the gifts all weekend,” Burk said. At the potlatch, those gifts were distributed, along with jars of fish.

“I could tell a lot of people were touched,” she said. “We were having a community gathering around food and it was positive.”

Those gatherings should happen more often, not just after a death, she said.

She’s inspired now to organize a Hunting Camp to teach young people how to process meat after a successful hunt. That may happen the first week of October. She also wants to revive the tradition of hunters sharing moose meat with elders.

It may even be time to share these important skills and traditions beyond Nenana.

“We should give kids who live in the city, a chance to learn,” she said.

In the summer of 2020, Burk started looking through her dad’s journal.

“I realized we had all these years of people at camp,” she said. She experienced a feeling of satisfaction, knowing that she was once again processing fish.

“This is what we’re meant to do,” she said. “I’m proud. I was really extremely grateful and happy.”