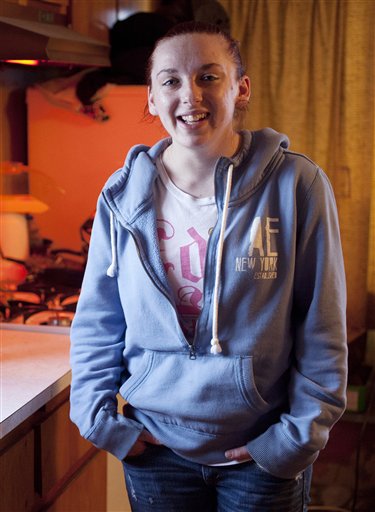 In this Saturday March 2, 2013 photo Jewel Meader poses for a photo at a friend's cabin, in Nikiski, Alaska. The 19-year-old has been couch-hopping for the last five years and finally has a place of her own, but it does not yet have running water so she uses other people's showers after work before heading home. (AP Photo/Peninsula Clarion, Rashah McChesney) 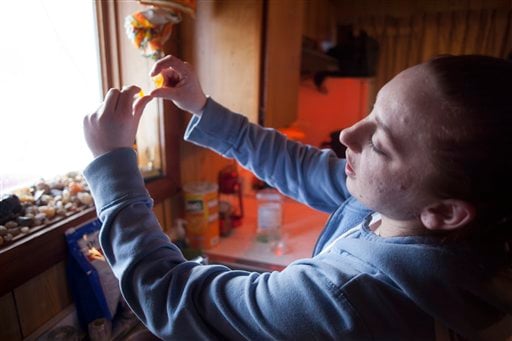 In this Saturday March 2, 2013 photo Jewel Meader shows two of the several kinds of agates on the windowsill in a friend's cabin, in Nikiski, Alaska. The 19-year-old has been couch-hopping for the last five years and finally has a place of her own, but it does not yet have running water so she uses other people's showers after work before heading home. (AP Photo/Peninsula Clarion, Rashah McChesney)

In this Saturday March 2, 2013 photo Jewel Meader poses for a photo at a friend's cabin, in Nikiski, Alaska. The 19-year-old has been couch-hopping for the last five years and finally has a place of her own, but it does not yet have running water so she uses other people's showers after work before heading home. (AP Photo/Peninsula Clarion, Rashah McChesney)

In this Saturday March 2, 2013 photo Jewel Meader shows two of the several kinds of agates on the windowsill in a friend's cabin, in Nikiski, Alaska. The 19-year-old has been couch-hopping for the last five years and finally has a place of her own, but it does not yet have running water so she uses other people's showers after work before heading home. (AP Photo/Peninsula Clarion, Rashah McChesney)

KENAI, Alaska — Growing up, Jewel Meader had more on her mind than most 12 year olds.

Who's making the money?

Who's paying the bills?

Where am I going to sleep tonight?

Those were common questions, she said.

She had just moved back with her mom in Nikiski and was taking classes at the area school. But life at home was anything but healthy, she said.

"My mom tried to help me when she could," Meader said, but her family argued, and her mother had "complications," she said.

Her mother often had no job. They had no car, no truck, no money.

"No anything," she said.

Meader had to walk the more than two miles to school each day, in rain or snow.

It was miserable, she said.

When she was 13, she left her mother's and alternated homes between her aunt and her boyfriend at the time. Occasionally, she said, she would return to her mother's, but never for very long.

At school she was a stigma, she said. After she transferred to Kenai Alternative High School, she got sick and, because her mother didn't have a car, she could not make it to doctor appointments. She dropped out.

As soon as she was old enough she got a job at McDonald's, but she could not hold it. Around lunch time each day her sickness returned, making her pale, shaky and ill. After working there for five months, the 16-year-old's failing health chased her from employment.

She often felt she had no way call to for help.

"That's pretty much the darkest time," she said, that loneliness.

Apathy would settle in, too. "You get to the point where you don't want to do anything," she said.

She lived this way for five years.

Meader's story is not uncommon, Krista Schooley said. Schooley and her husband are CEOs of The Underground, a two-year-old organization that coordinates outreach efforts for homeless, at-risk and in-need youth on the Central Kenai Peninsula.

Schooley is one of the figures that helped pull Meader from her slump. She connected her to food, clothing, transportation and housing.

"Kids are coming to us saying we don't have any clothing for school," Schooley said.

The problem is well documented, though she said the community is unaware just how severe it really is.

As of Feb. 5, the Kenai Peninsula Borough School District reported 212 students enrolled in its Student in Transition Program, KPBSD spokesperson Pegge Erkeneff said. More than 50 of the students are without a parent or legal guardian, and the enrollment numbers are expected to break 300 by the time the school year ends, she said.

Last year, the Merit Inn housed 207 homeless individuals, 95 of whom were younger than 16, said Leslie Rohr, executive director of Love INC. Since it opened December 2008, the hotel has housed almost 1,000 individuals, she said.

At this year's second annual Project Homeless Connect, 47 individuals sought the outreach services provided at the event; they represented 115 people based on the number of people in their family, according to Central Peninsula Homeless Connect data.

Last year, the LeeShore Center sheltered 144 women and children that domestic violence had chased from their homes, said Cheri Smith, the center's executive director. The year before, the shelter housed more than 200, she said.

Each year, Laurie VanBuskirk, social services specialist for the Kenaitze Indian Tribe, said she sees about 100 people who are either homeless or in danger of being homeless.

Since The Friendship Mission opened in 2005, it has housed more than 500 men, said Skipper Cowgill, ministry board president and executive director. He said his ministry helps about 90 men each year.

"Our homeless population blends in," Rohr said. "It's not the scruffy bearded guy sitting on the street corner with a sign. If you saw any one of these families in Walmart you wouldn't say, 'Oh, look, they're homeless.' They're just part of our community that are overlooked."

Children flee alcohol abuse at home and have nowhere else to go. Adults get sick and cannot afford the medical bills. Families living paycheck to paycheck lose a job and everything crumbles.

There are many ways individuals or families end up sleeping behind buildings, in cars and mobile homes, on couches and in stores open 24 hours a day, or using the services of outreach agencies such as The Merit Inn, The Underground, The Friendship Mission or the LeeShore Center, she said.

The Homeless Action Committee and the Kenaitze Indian Tribe are researching the issue, trying to quantify the problem, determine who can help, how to correct it.

But it is a "work in progress," and the two agencies are only in the early stages of research, said Regina Theisen, a member of the leadership team for People Promoting Wellness, one of the two branches under the Homeless Action Committee.

In the meantime, more of the community needs to know about the problem, said Michael Holley, a concerned Soldotna resident. It is unacceptable that they don't, he said.

"We just need to have that put in front of our noses more than we have now," Holley said.

He said he and his wife had already known homelessness was an issue, but only recently did he find out how serious an issue it really was.

He said in a community with little for children to do, homeless youth can quickly become drug addicts or alcoholics to cope.

But it does not have to end poorly for all homeless youth.

Meader is now 19. She is enrolled in Connections, a KPBSD home school program, and is more than half way through obtaining her high school diploma.

Also, she has a steady job as a personal care attendant for ResCare HomeCare.

"(I've) got a way to pay people back and a way to get back and forth from school," she said.

But there are still challenges.

Meader's last apartment was "destroyed" by the previous tenants, so she moved out and is now looking for a replacement. It has to be between Nikiski and Kenai where she works because she is still without a car and gas is too expensive: The $100-stipend the Peninsula Job Center gives her for a month's worth of gas does not last a month, she said.

Looking back, Meader was surprised by the support she received after she met KPBSD Homeless Liaison Kelly King. For her apartment at the time, King helped Meader gather knife sets, silverware, towels, a hot water tank, couches, a rug, cloths — community donations to swing her out of her slump.