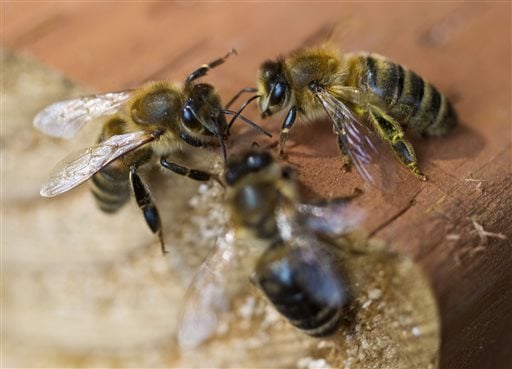 JUNEAU, Alaska — Alicia Gillis has been stung by bees three times in the last eight days, but that's fewer than you'd expect after opening a box of bees sent through the mail.

An animated Gillis mimicked shaking a small wooden crate with mesh sides. She then removed a can that held food for the journey from Oregon and a tiny container holding the queen. She tipped the crate upside-down and the bees tumbled into the hive, more than likely unhappy with their welcome to Juneau. Only one bee stung her then. The other two stings came later.

"They're like any other animal; you usually get stung for doing something stupid," she said.

Local honey still manages to find its way to farmers' markets, however, thanks to the efforts of people like Gillis, who start their hives anew each spring.

Gillis and her bees seem to be getting along just fine. She is able to open the hives without incident and watches the bees buzz around the hives and listens to them hum inside.

Most beekeepers start their hives new each spring with loads of bees brought from the Lower 48. While bees can survive Alaska's winter in the wild, keeping a domestic hive alive can take a lot of expensive work — hence Gillis' box of mailed bees.

Gillis' two hives house two separate colonies of bees, both Carniolan honey bees, each with their own queen. The hives perch on a platform between two trees a back yard shared by chickens, ducks, rabbits and a cat.

"I like the concept of them," she said. "They're self-sustaining really . and who doesn't love the idea of having honey."

The Interior Alaska Beekeepers Association estimated in 2010 that there were just 750 domestic bee colonies in Alaska, producing about $850,000 in honey sold at local marketplaces. That number appears to be on the rise, spurred by a trend toward local agriculture and sustainability.

The most common participants in that trend are people like Gillis. Every creature she keeps at her home serves a purpose, she said: Chickens lay eggs and eat insects in the garden, rabbits provide manure for compost and fiber for spinning yarn, the cat takes care of the mice and provides companionship. The bees, Gillis said, play a huge role in not only her backyard ecosystem, but on a larger scale.

"They're pollinators, so they're important to ecology," Gillis said.

Bees have been in the news for their declining populations, but they are vital to agriculture and the ecosystem at large, Gillis said. She discussed colony collapse disorder, which happens when a hive's worker bees abruptly disappear. (It hasn't been seen yet in Alaska.)

There seems to be no definitive cause, she said, but some theorize it has to do with bees foraging only one type of pollen, common with bees taken to large monoculture fields, like almond trees in California.

Gillis plans to mostly leave her bees alone and let them forage what they will, supplementing with sugar water only when necessary. The bees returned to the hive during a Tuesday afternoon interview, pollen coating their hind legs and abdomen.

"They've got forage. It's awesome," Gillis exclaimed when she pointed it out. "It makes me really happy."

Some of that happiness may stem from the fact that this isn't Gillis' first try with bees — she was unsuccessful with a hive last year. After buying a hive off Craigslist and chatting a bit with the woman who sold it, she wasn't quite prepared for their arrival and hadn't done as much research as she has this time around.

She hived them correctly, but said, "Everything else I did wrong: the way I fed them, I oversprayed them, and with that nasty, cool April with all that snow — those bees didn't make it through April."

This year, she's hopeful not only about keeping the colonies alive through the summer and fall, but also about overwintering her bees. She thinks her Warre hive (pronounced WAR-eh and named after its French designer) might be better insulated to protect the bees from the elements through the winter, she said, but added that Southeast Alaska has fairly mild winters as it is. She said she might supplement with another package in the spring, if necessary.

Her plan to overwinter bees means she isn't expecting to harvest any honey, at least not unless there are two to three full "supers," she said.

There are two types of boxes in the hives. The brood box and the supers, where the honey is made. They are all separate pieces and she can add more supers as the bees make more comb and honey. She's more interested in having healthy colonies than having honey.

"That's kind of just a fringe benefit of keeping bees," Gillis said of the honey.

"I'm obsessed with the idea of small urban farming. Little and self-sustainable," she said. "I think it would be awesome if it takes off like chickens did."