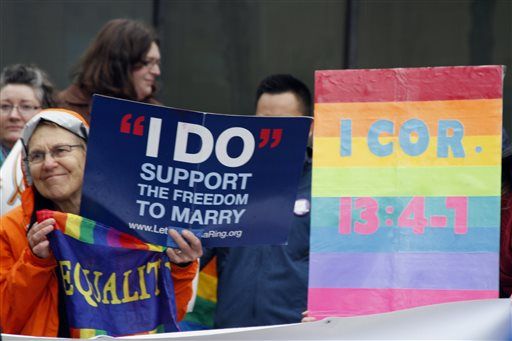 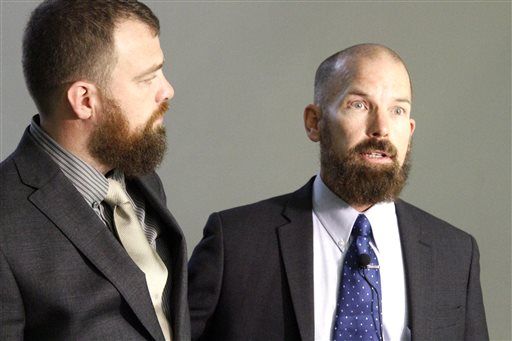 Christopher Shelden, left, and Matthew Hamby, speak to reporters following a hearing Friday, Oct. 10, 2014, in federal court in Anchorage, Alaska. They are one of five gay couples suing to overturn the state's ban on gay marriage. (AP Photo/Mark Thiessen) 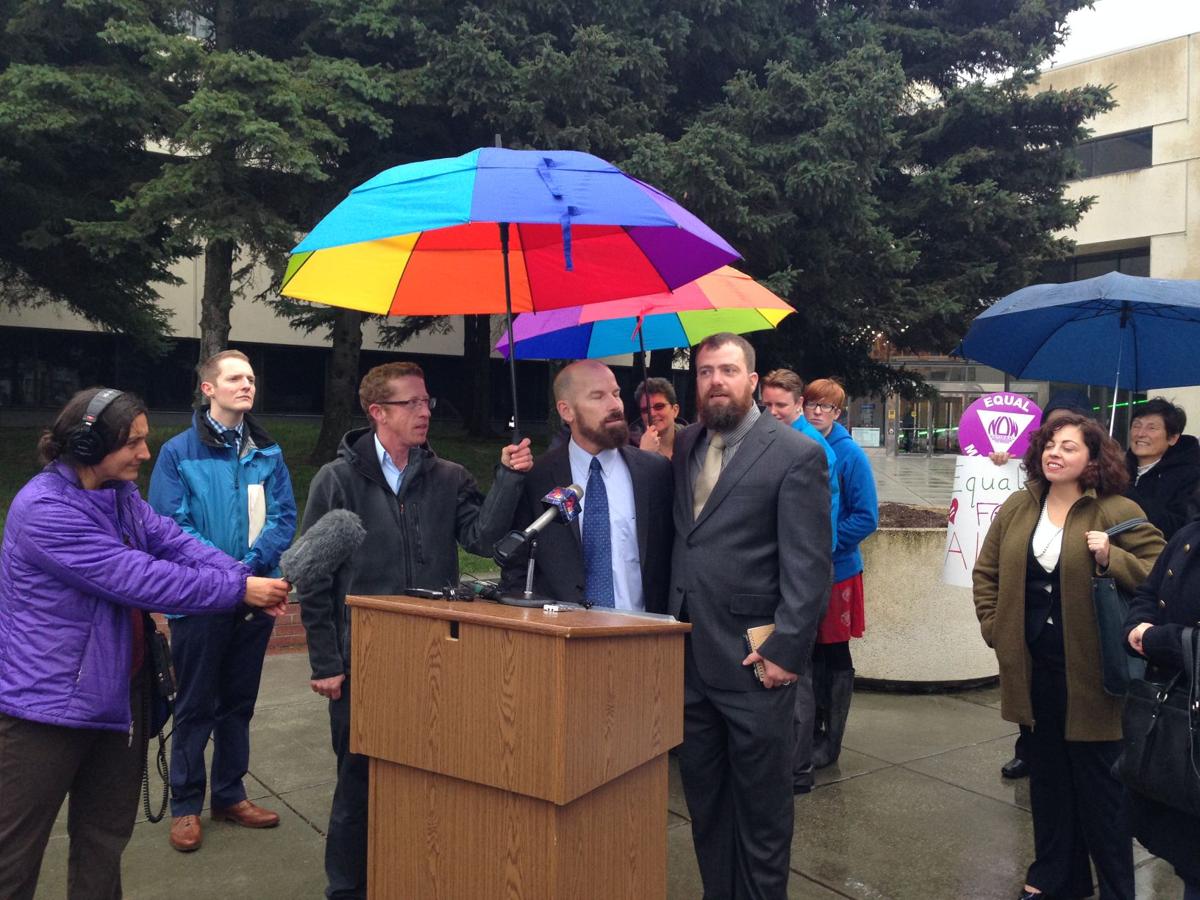 Identity of Alaska director Drew Phoenix, left, holds an umbrella for plaintiffs Matthew Hamby, middle, and his husband Chris Shelden outside the federal courthouse in Anchorage on Friday, Oct. 10, 2014.

Christopher Shelden, left, and Matthew Hamby, speak to reporters following a hearing Friday, Oct. 10, 2014, in federal court in Anchorage, Alaska. They are one of five gay couples suing to overturn the state's ban on gay marriage. (AP Photo/Mark Thiessen)

Identity of Alaska director Drew Phoenix, left, holds an umbrella for plaintiffs Matthew Hamby, middle, and his husband Chris Shelden outside the federal courthouse in Anchorage on Friday, Oct. 10, 2014.

In his written order, Judge Timothy Burgess said Alaska’s law violated rights guaranteed under the U.S. Constitution. The ruling comes in the wake of decisions by the U.S. Supreme Court and 9th U.S. Circuit Court of Appeals in the past week to reject appeals by other states seeking to keep their bans on same-sex marriage in place.

Gov. Sean Parnell announced the state will appeal the decision, saying it’s his duty to uphold Alaska’s constitutional amendment, approved by voters in 1998, which prohibited the state from allowing or recognizing same-sex marriage. The state had argued in court that voters have the power to decide the legal definition of marriage, not judges.

"As Alaska's governor, I have a duty to defend and uphold the law and the Alaska Constitution," Parnell said in a news release announcing the appeal. "Although the district court today may have been bound by the recent 9th Circuit panel opinion, the status of that opinion and the law in general in this area is in flux. I will defend our constitution."

The news release outlined a number of outstanding circuit court cases on the issue of same-sex marriage that could end up in front of the U.S. Supreme Court before they're finally resolved.

Because the state of Alaska’s defense was seen as similar to those in other states where bans were overturned, same-sex marriage advocates said an appeal by Alaska officials would likely fail and cost the state more money for a largely symbolic move.

“It’s a foregone conclusion that they’ve lost and have no chance of winning on appeal,” said Matthew Hamby, one of the plaintiffs in the case, along with his husband, Chris Shelden. “That just throws good money after bad. It seems to me that everybody, all citizens of Alaska, need to move on and be happy that we’re treating all loving couples equally and just leave it at that.”

Alaska Department of Law spokeswoman Cori Mills said the state is reviewing the impact of the appeal over any same-sex marriage applications that could be filed this week.

"We are still reviewing the decision and will work with the involved agencies on what has to be done and what the next steps are for the litigation," she said in an email to the News-Miner.

The Alaska branch of the American Civil Liberties Union was one of many groups to applaud the Sunday ruling, hailing it as a "wonderful victory for same-sex couples and for all Alaskans."

"Alaska had the misfortune of being the first state, in 1998, to ban equal marriage and bake discrimination into our constitution," said Joshua Decker, the executive director of the ACLU of Alaska. "Today's decision allows Alaskans to marry and to have their Outside marriages recognized here. This victory brings equal rights to thousands of Alaskan couples who are in loving, committed relationships."

The Supreme Court and 9th Circuit Court decisions had set the stage for a dramatic courtroom showdown in Anchorage on Friday, when Burgess heard arguments in the trial over a lawsuit seeking to overturn Alaska’s ban.

Five same-sex couples had sued state officials, including Parnell, in May saying the state was infringing on their rights to due process and equal protection. State attorneys maintained their position that Alaska voters had decided the issue.

In court Friday, the plaintiffs’ attorneys argued the 9th Circuit Court ruling overturning same-sex marriage bans in Idaho and Nevada had authority in Alaska and that Burgess had no other choice than to immediately rule in their favor.

The state’s attorney disagreed, saying there were unique issues in the Alaska case and that the higher courts’ decisions were not final. The state attorney, William Milks, also asked for a stay if the judge were to rule in the plaintiffs’ favor, essentially requesting a delay that would have prevented same-sex couples from marrying right away to give time to sort out any remaining legal issues.

This would avoid “chaos,” Milks said, if marriages were granted and a final decision from a higher court later changed that.

But Burgess’s order granting the plaintiffs’ motion for summary judgment did not include a delay.

“The Court finds that Alaska’s ban on same-sex marriage and refusal to recognize same-sex marriages lawfully entered in other states is unconstitutional as a deprivation of basic due process and equal protection principles under the Fourteenth Amendment of the U.S. Constitution,” Burgess wrote.

"The Court immediately enjoins the state of Alaska, including state officers, personnel, agents, government divisions, and other political entities, from enforcing (the law banning same-sex marriage) and to the extent that the laws prohibit otherwise qualified same-sex couples from marriage and refusing to recognize lawful same-sex marriages entered in other states.”

Alaska has a three-day waiting period for marriage applications so same-sex partners will not be able to wed on Monday, but they could as early as Thursday barring any legal or administrative intervention.

The Williams Institute, a public policy firm studying same-sex marriage and other related issues, released a statement estimating that there are some 1,230 same-sex couples living together in Alaska and that nearly a quarter are raising children in their homes.

The institute estimates that it expects about 614 of those couples to marry in the first three years marriage becomes legal in Alaska, generating an estimated $8 million in wedding-related spending.

Hamby, one of the plaintiffs, said he was excited to now be able to attend his gay and lesbian friends’ weddings in Alaska. Hamby said he and Shelden, his husband, had always been proud to be involved in the case.

“It impacts the lives of a lot of people, real people. It’s not just a matter of law. It’s something that is life changing for people. Now they can move on and recognize the people they love,” Hamby said. “We wanted to be on the right side of history, to stand up for what’s right, to stand up for our rights and everyone else’s.”

Status of same-sex marriage across the land