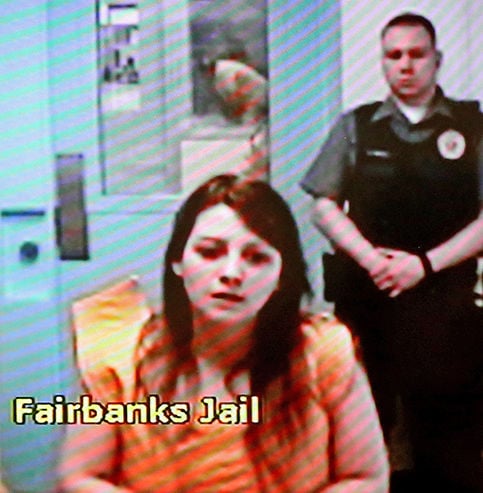 Stephany Lafountain is arraigned at the Rabinowitz Courthouse Friday morning, August 31, 2018. Lafountain is charged with homicide in the 2015 and 2017 deaths of her two daughters. 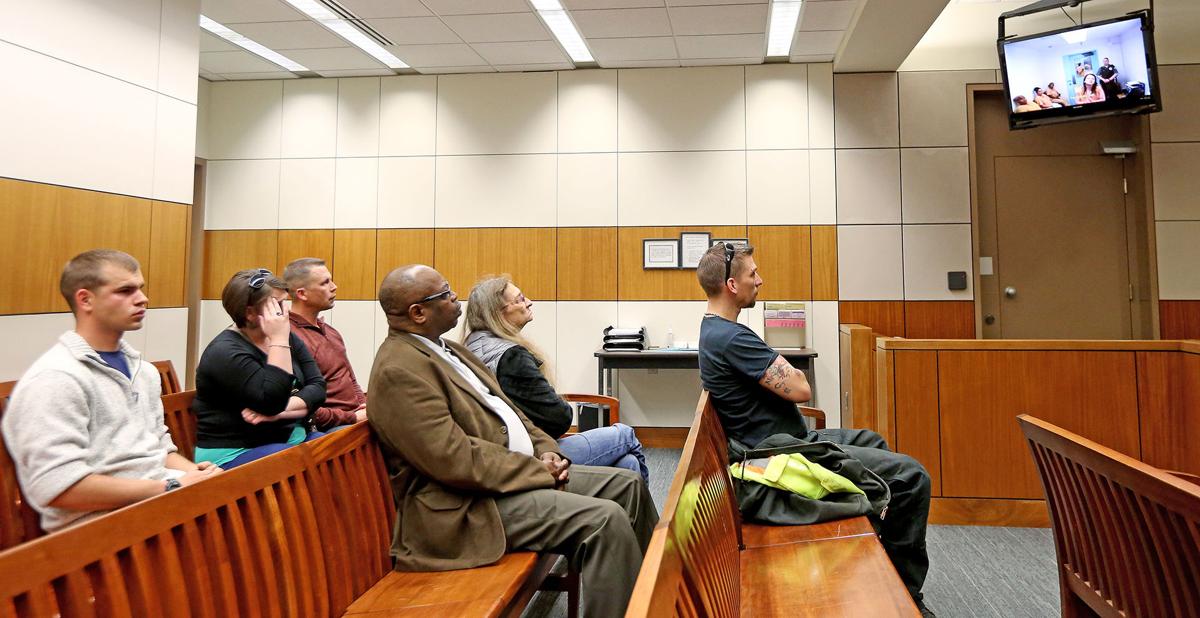 Attendees watch the screen and listen as Stephany Lafountain is arraigned at the Rabinowitz Courthouse Friday morning, August 31, 2018. Lafountain is charged with homicide in the 2015 and 2017 deaths of her two daughters. 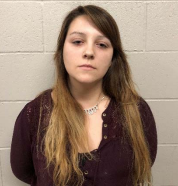 Stephany Lafountain is arraigned at the Rabinowitz Courthouse Friday morning, August 31, 2018. Lafountain is charged with homicide in the 2015 and 2017 deaths of her two daughters.

Attendees watch the screen and listen as Stephany Lafountain is arraigned at the Rabinowitz Courthouse Friday morning, August 31, 2018. Lafountain is charged with homicide in the 2015 and 2017 deaths of her two daughters.

Updated: Stephany Lafountain was arraigned this morning. Lafountain appeared for her arraignment via closed circuit TV from Fairbanks Correctional Center. She was wearing an anti-suicide smock.

Lafountain​ said she has legally changed back to her maiden name of Bilecki.

Lafountain's next court appearance is scheduled for 2 p.m., Sept. 5.

FAIRBANKS — A 23-year-old Fairbanks woman was arrested Thursday afternoon and charged with homicide in the 2015 and 2017 deaths of her two biological daughters.

Stephany E. Lafountain was indicted Wednesday on one count of first-degree murder and two counts of second-degree murder for each infant. She is being held at Fairbanks Correctional Center on $2 million bail and will be arraigned at 11 a.m. Friday in Fairbanks District Court.

"We have two infants, we have two babies, that were killed by their mother. How do we even imagine that? As a justice system, how do we make this right?" Jewkes said.

According to a news release issued before the news conference, Lafountain called 911 on Nov. 20, 2017, to report her 13-month-old daughter was not breathing. The child was transported to Fairbanks Memorial Hospital and later flown to Providence Medical Center in Anchorage. She was pronounced dead four days later.

In their investigation into the child's death, Fairbanks police reopened a death investigation for Lafountain's 4-month-old daughter, who died Sept. 15, 2015, shortly after Lafountain reported she was not breathing. The child's death was not investigated as a homicide at the time, but investigators reviewing the case saw similarities to the 2017 case, which caused them to broaden their scope.

Autopsy results showed Lafountain's 13-month-old died of complications from lack of oxygen to the brain. Her 4-month-old's cause of death was officially undetermined, but her symptoms were consistent with a suffocation death, according to the news release.

The children had different fathers. Lafountain does not have any other children, police said.

• ways to kill human with no proof

• can drowning show in an autopsy report

• 16 steps to kill someone and not get caught

• how to commit the perfect murder

At Thursday's news conference, Jewkes thanked Detective Avery Thompson and his entire detective division for the "thousands of hours" of work they put into the case during their nine-month investigation.

Jewkes also thanked the children's families for their patience, noting "this is the first time anybody’s heard about this."

"These are two murders that occurred in 2015 and 2017 ... that we’ve never discussed. That’s just something that is necessary, based on the investigation."

Jewkes said he hopes the justice system can bring "some kind of closure" to the families who "suffered in obscurity" while allowing police to build their case.

"They shouldered the grieving process alone and we’re going to bring this to light and hopefully provide some kind of closure to them. And that’s important," Jewkes said.