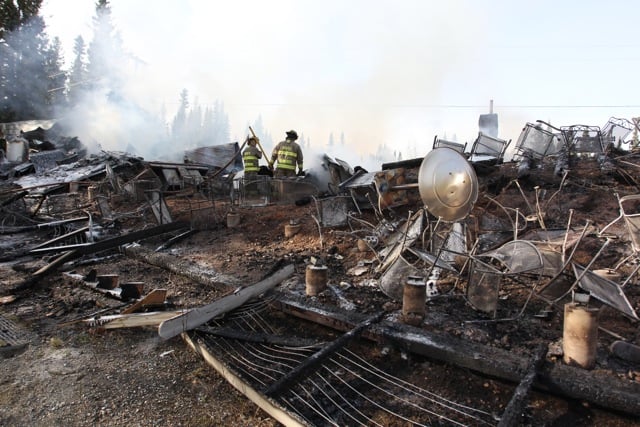 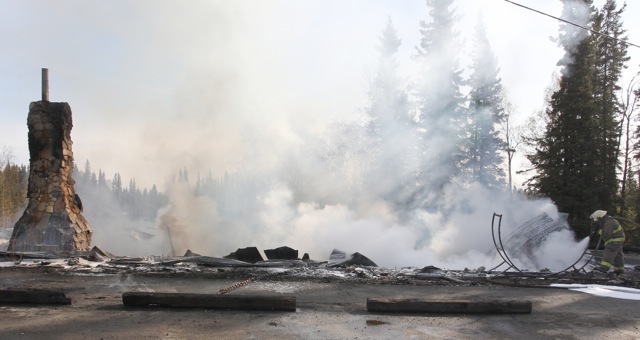 Nobody was hurt in the fire, but the 55-year-old lodge, which included a bar and restaurant, was a total loss.

Firefighters received a report of the fire from a neighbor at about 3:30 a.m., said Tim Castleberry, fire chief for the Rural Deltana Volunteer Fire Department.

"There was basically nothing left of the structure when we got there," said Castleberry, who was still on scene at 4 p.m. Thursday while State Fire Marshal Chris Grooms investigated the cause of the fire. "There were partial walls still standing, but it was burning down into the basement by the time we got there."

All three local volunteer fire departments responded to the fire, including the city and Fort Greely departments. Firefighters were on scene until 10:30 a.m. ensuring that fire did not spread to the wildlands surrounding the lodge, Castleberry said.

The log lodge included timbers salvaged from the old, wooden bridge that spanned the Tanana River. Those timbers fueled the fire, Castleberry said.

"All that stuff was creosote soaked," he said. "That added to the difficulty of trying to fight it."

Located on the bank of the Delta Clearwater River about 12 miles off the Richardson Highway a few miles north of Delta, the Clearwater Lodge was an icon in the community about 100 miles southeast of Fairbanks.

"It's been a landmark for many, many years," Castleberry said.

The lodge was built in 1958 by Al Remington, one of the first homesteaders in the area. Current owners Patsy and Kevin Ewing bought the lodge in 2001. The building was insured, according to Castleberry. Attempts to reach the owners of the lodge were unsuccessful.

The lodge was a favorite local watering hole and eatery, catering to both local residents and visitors from Fairbanks who traveled to Delta to boat or fish on the Delta Clearwater River. The building had a giant picture window that looked out on the river.

"It was a beautiful place," said Vern Heintz, chief of the Delta Junction Volunteer Fire Department. "You could sit there and watch the river go by.

"We keep a boat on the river and we'd go there quite often to get lunch or dinner," he said.

The lodge also served as one of the main entertainment venues in Delta, playing host to bands, comedians, wedding receptions and other events over the years.

Fairbanks radio personality and comedian Glenn Anderson was sad to hear the lodge burned down. Any time Anderson arranged to have a comic come to Fairbanks, he always booked a show at the lodge as part of the trip.

"Most of the comics we've brought up here have done that room," Anderson said. "It's the one room the comics talk over and over about.

"We never had a bad show there," he said. "It'd be the middle of winter and you might get 30 people in there, but it would be the best show of the week."