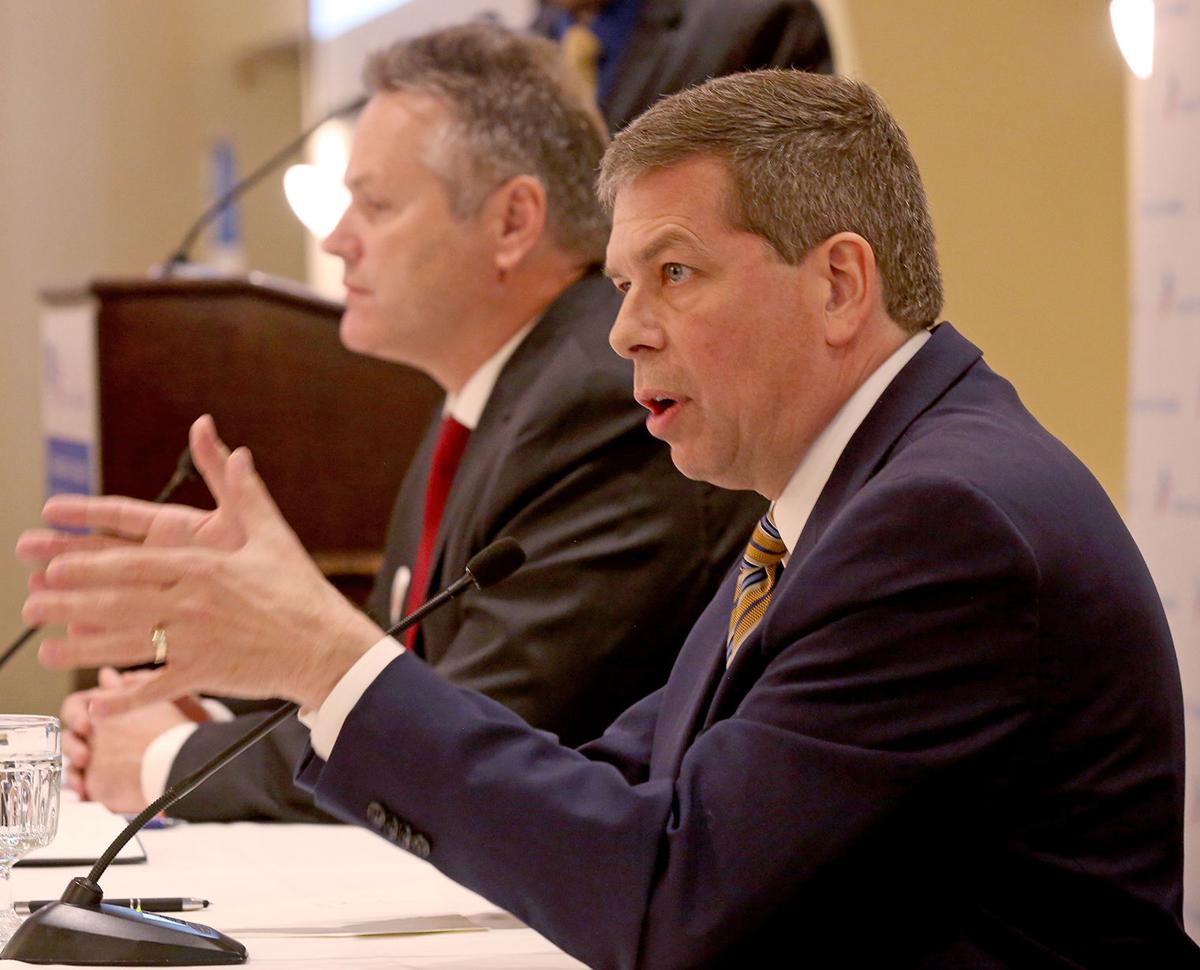 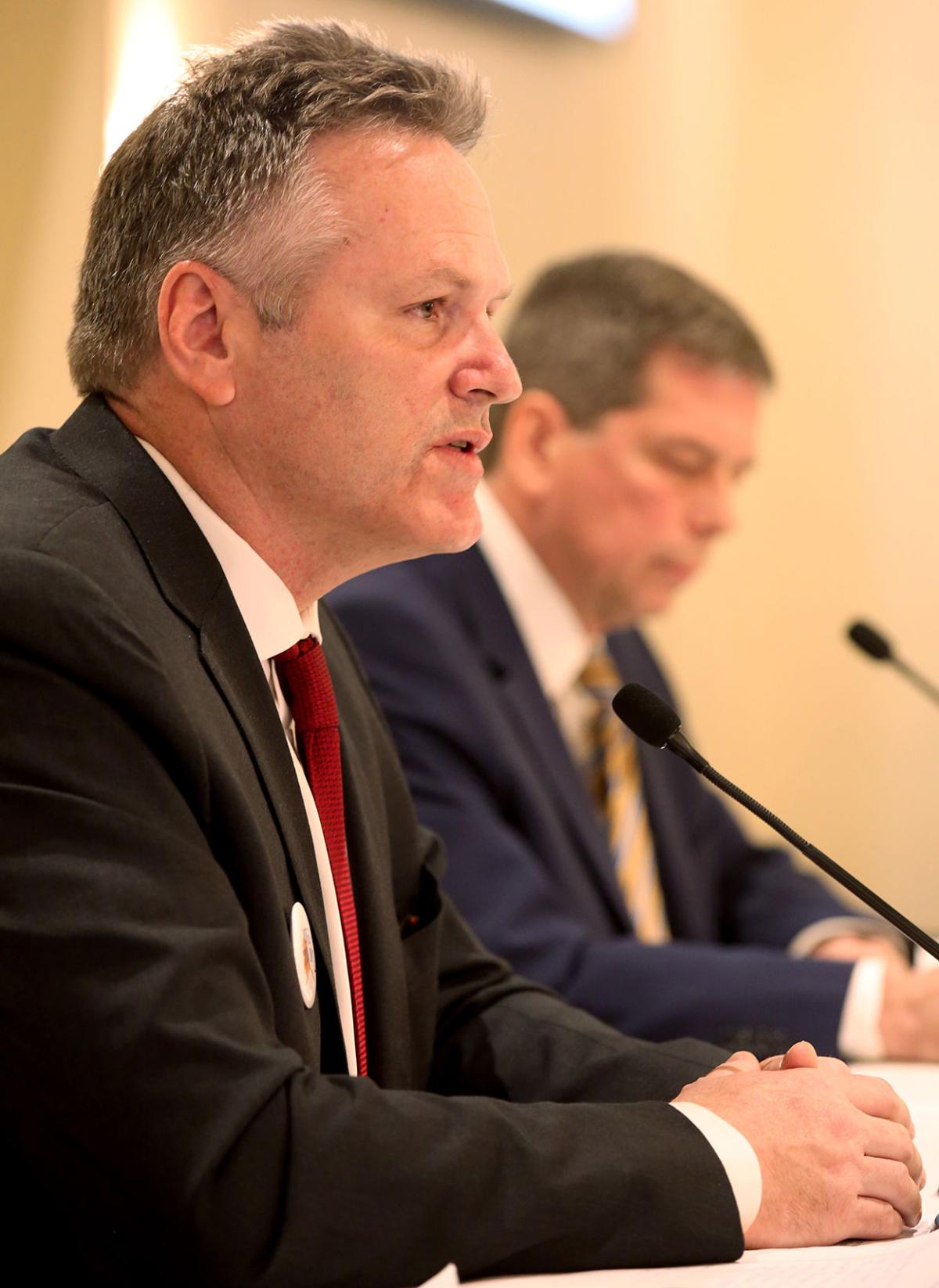 Attendance was sold out during the Greater Fairbanks Chamber of Commerce Gubernatorial Forum Luncheon in the Westmark Hotel Gold Room Wednesday, October 24, 2018.

Attendance was sold out during the Greater Fairbanks Chamber of Commerce Gubernatorial Forum Luncheon in the Westmark Hotel Gold Room Wednesday, October 24, 2018.

Begich and Dunleavy were the only two candidates participating in the forum. Gov. Bill Walker announced last week he is not seeking re-election, and Libertarian candidate Billy Toien was not invited to participate, though he was in the audience.

Amid growing public criticism regarding several no-shows at previous gubernatorial debates around the state, Dunleavy began his opening statements by emphasizing to the audience that he actually was at the debate.

“I just let everyone know that I’m here at this debate. Mark, I’m here," Dunleavy said.

During his opening statement Begich discussed the polarity of the current political climate.

“I don’t want to watch the news in the morning because it’s so toxic,” he said. “It doesn’t matter if you’re a Democrat or Republican, independent, Green party, whatever you pick; it’s an environment where it’s turned to where it’s one side versus the other side… But we must work together regardless of whoyou are, where you are or what party you’re from.”

The first question asked of candidates highlighted the issue of the state capital budget and deferred maintenance.

Dunleavy said he wants to reduce the state operating budget to fund the capital budget.

"We certainly need to build Alaska. Unless we get that operating budget under control, we really are going to have a tough time having a capital budget going forward," Dunleavy said. "Without reducing our operating budgets, it’s going to be a problem creating a future for Alaska in terms of resource development."

Dunleavy said he'd want to look at programs within the operating budget to see what the state can reduce and how the government can operate more efficiently.

Begich said he would introduce a capital budget early on and work toward a six-year, $2 billion capital budget goal so it wouldn't have to be discussed each legislative session.

“I propose a six-year capital budget that I would bring forward to the Legislature for a G.O (general obligation) bond in 2019 by mail-in ballot," he said.

Begich noted that he wanted to address the state's deferred maintenance in a long-term plan so the cost is sprinkled over several years and is easier on the budget.

Whichever candidate is elected will inherit the remainder of this year's budget from Walker. The candidates were asked how they would work within that budget, whether it be spending savings or looking for other sources of revenue.

Dunleavy focused on making cuts to fit into limited spending.

"If oil holds in the $70 or $75 range, which is not something you want to bank on long term of course, we’re looking at about $3.1 billion in additional revenue," he said. "We’re going to make sure that we prioritize our spending. Public safety first, education, transportation and management of our natural resources. We are bound and determined to have a balanced budget, and if we need to, we’ll use some of the savings in the statutory budget reserve."

Dunleavy said a lean budget means not spending money on projects like the proposed commuter rail between Anchorage and Palmer or on climatologists.

Begich said a governor has to bring a budget based on past budgets and has to get through the first year in order to make a plan for the future.

"The goal is you have to do this first year deal in a longer-term plan," he said. "The real issue is the budget in 2020. That has to be a sustainable budget, not utilizing one-time money and savings accounts, because if you do that, we will pay the price down the road.”

On the subject of mental health services being in crisis, the candidates were asked how they would address the issue.

Dunleavy said health and social service programs are not being managed well.

"It almost seems they’re falling apart before our eyes. The thing we have to do is manage the resources better," he said. "It’s just not going to the Legislature and asking for money. You have to have management in there that wants specific outcomes. Right now we’re having people released from API (Alaska Psychiatric Institute) and they’re going into jail, walking on the streets, going to hospitals. This is not how you should run a state."

Begich said it's important to work with the University of Alaska to increase the mental health workforce.

“Even if you adequately fund mental health services, there’s not enough people to work there," he said. "We have to work with our university to make sure we have the workforce, counselors, psychiatrists and other behavioral health services.

“We have to put resources into this," he said. "This is a crisis in this state. There is no question about it.”

The mental health subject then rolled into a question about Medicaid expansion. Walker expanded Medicaid in Alaska using mostly federal dollars as allowed under the federal Affordable Care Act.

Begich responded that Medicaid impacts working families across the state but that it doesn’t do a good job on preventative health care. He said changing the way it works within the system could lead to savings, noting that 20 to 30 percent of the costs is paperwork.

Dunleavy said he opposed Medicaid expansion in Alaska early. He said the state needs to manage it better and that he would look at the program to see if Alaska has the money to continue it. He said the expansion was built on a faulty base.

Candidates were also asked if they would stay on the path Walker has laid out for the Alaska liquefied natural gas pipeline.

Begich emphasized continuing to work with Chinese investors to move the project forward.

"I think it's going to take a lot of work. But I think it's an opportunity," Begich said. "It's close to the goal line. It's the closest it's ever been in our history, and we should do everything we can to push it over. Working with China, we've got to continue working on those relationships. Those relationships don't happen overnight."

Dunleavy said it was difficult to know how to move forward because a lot of the details on the current plan are confidential.

"It's difficult to get the answers to the questions that we all need to ask," he said. "Do we want to monetize our gas? We all do. Do we want to make sure we get a good return for our valuable investment? Absolutely. Do we want cheaper energy for Alaskans? Absolutely. But the devil's in the details."

More information on candidates and the election can be found at http://www.newsminer.com/news/politics/