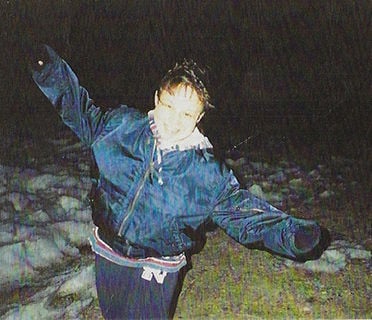 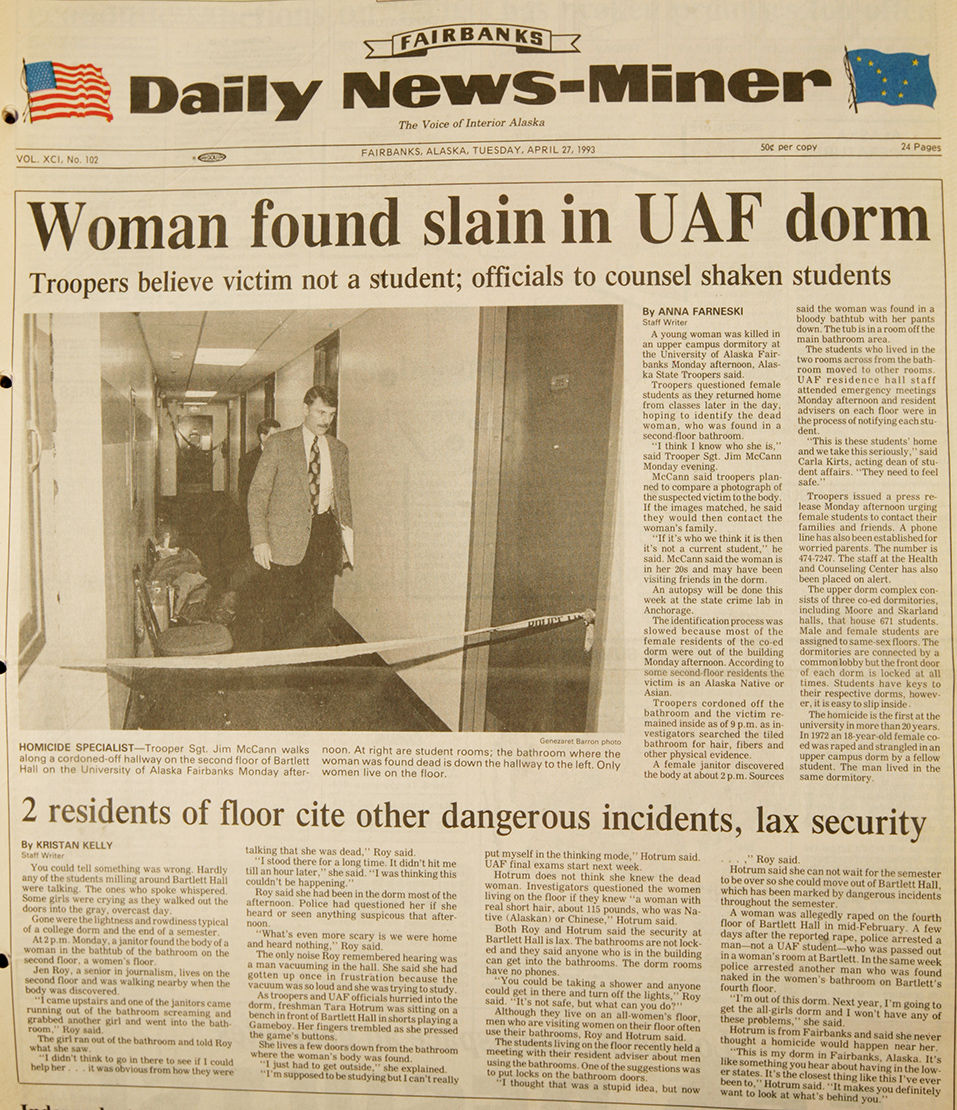 The original story in the Fairbanks Daily News-Miner on the murder of Sophie Sergie on the UAF campus published April 27, 1993. 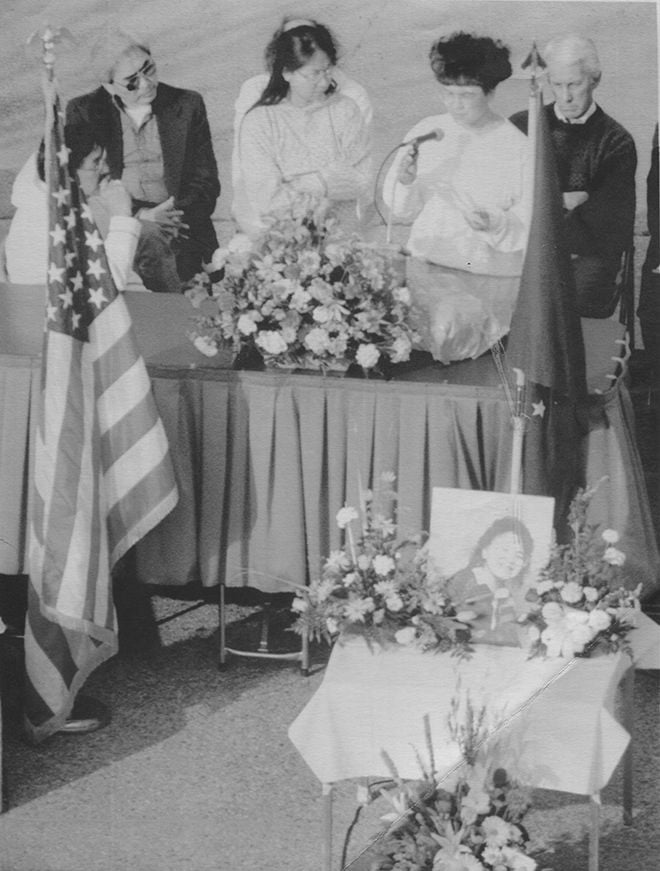 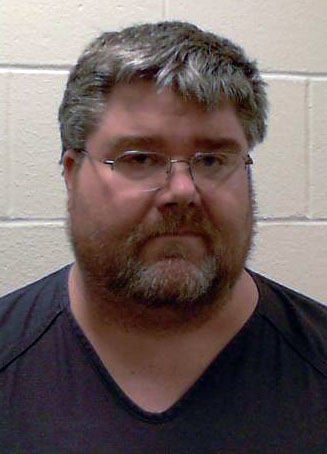 FAIRBANKS—Alaska State Troopers arrested a 44-year-old Maine man Friday in connection with the 1993 sexual assault and killing of Sophie Sergie, whose body was found in a University of Alaska Fairbanks residence hall.

Steven Harris Downs was arrested Friday afternoon in Auburn, Maine, and charged in the 1993 sexual assault and murder of 20-year-old Sophie Se…

Steven Harris Downs, of Auburn, Maine, was identified as a suspect after newly submitted DNA evidence linked him to the crime, according to a trooper news release issued Friday afternoon.

Downs is charged with first-degree murder and first-degree sexual assault. He was arrested by the Maine State Police Tactical Team outside an Auburn business at 1 p.m. Friday and will be extradited to Alaska for prosecution. Alaska State Troopers and Auburn police assisted in the arrest.

The arrest comes after dozens of investigators spent thousands of hours on the case over the decades that it remained unsolved, officials said at a Friday afternoon news conference in Anchorage hosted by the Alaska Department of Public Safety. Sergie’s mother, Elena Sergie, brother, Stephen Sergie, and cousin, Olga Tinker John, attended.

The news conference was broadcast via Facebook Live. None of Sergie’s relatives spoke.

The original story in the Fairbanks Daily News-Miner on the murder of Sophie Sergie on the UAF campus published April 27, 1993.

Sergie, 20, of Pitkas Point, was found dead with her pants down in a bloody bathtub at Bartlett Hall at UAF on the afternoon of April 26, 1993. Sergie had been sexually assaulted, stabbed in the face multiple times and shot in the back of the head. An autopsy revealed she died from the gunshot wound. A .22-caliber bullet and DNA evidence were recovered from the scene.

As the investigation began, trooper Sgt. Jim McCann, the original investigator in the case, speculated that Sergie was "in the wrong place at the wrong time." He suspected the killer was a student or former student who had likely fantasized about the crime beforehand.

"Whoever did this is very, very angry at women," McCann told the Daily News-Miner two weeks after the killing.

Sergie was studying marine biology at UAF on a full scholarship but had moved back home to earn money for orthodontic work, according to a criminal complaint filed in the case. Sergie flew to Fairbanks April 24 and was staying with a female friend at Bartlett Hall for the weekend. She planned to return to Pitkas Point, a small village in Southwest Alaska, after her April 26 orthodontic appointment. She was last seen alive shortly after midnight, when she told her friend she was going to smoke a cigarette. The friend told Sergie she should smoke next to the exhaust vent in the tub room of the women's bathroom because it was cold outside.

Troopers were long unable to identify a suspect in the case, much to the frustration of Sergie's family and friends. DNA collected from Sergie's body was processed in 2000, and the resulting DNA profile was compared to other profiles in the national database. All potential suspects were eliminated and the investigation went dormant in 2003, according to the complaint.

Downs was an 18-year-old UAF student living at Bartlett Hall at the time of Sergie's death, according to troopers. He and his roommate, who worked as a security guard at UAF, were briefly interviewed during the initial investigation. Both men denied any involvement or knowledge of the incident.

Downs' roommate was reinterviewed in 2010 after investigators learned he had been fired from his UAF security guard position for possessing a firearm in the dormitory. The man said he didn't own a .22-caliber gun but that his roommate, Downs, had an H&R .22-caliber revolver in his dorm room in 1993. A state forensic scientist later told investigators that the marks on the bullet recovered from the crime scene were consistent with having been fired from that type of gun.

In July 2018, an investigator with the troopers' Cold Case Investigative Unit decided to try genetic genealogy to identify Sergie's killer. The technique, which had been used earlier in the year to identify and arrest a California man suspected to be the Golden State Serial Killer, compares DNA profiles collected at crime scenes to DNA voluntarily submitted to public genealogical databases. The comparison identifies blood relatives of the unidentified suspect, and standard genealogical methods are used to narrow the field and identify a suspect.

The DNA profile submitted by the CCIU was found to match that of Downs' aunt.

"Through a thorough process of elimination, the lab determined that the known relative to the DNA profile only had one possible second-degree relationship with a male relative, her nephew, Steven H. Downs," the complaint states.

Tracking down a suspect

Further investigation revealed Downs was born in Maine and attended UAF from 1992 to 1996. He lived in Arizona for a time but eventually returned to Maine. Downs has no previous arrests, and his DNA had never been uploaded to the national database. He was most recently employed as a nurse in the Auburn area, according to the complaint.

Maine State Police contacted Downs at his home Wednesday and questioned him about the case. He again denied any involvement in Sergie's death and said he had been in his girlfriend's dorm room on the fourth floor of Bartlett Hall most of that evening. He repeatedly told detectives that Fort Wainwright soldiers were often in the building and speculated that one of them was responsible for Sergie's death.

Investigators searched Downs' house Thursday and obtained a sample of DNA from inside his cheek. The Maine state crime lab performed a DNA comparison in less than 24 hours and was able to match Downs' DNA with that found on Sergie's body.

"Sophie’s tragic death was a heartbreaking loss for her family and friends. It sent shock waves throughout our university and local community, and challenged our sense of security," White said. "While today’s news is a step toward justice for Sophie and her family, it is also a reminder of a traumatic chapter in our community’s history. If you are struggling with this news, please reach out for help."